Payment formula for HPO insurance is: MAX[$0, coverage level times {(projected yield times MAX(projected price, harvest price)) minus (harvest yield times harvest price)}].The first maximum function means payment must be positive. The second changes the price that determines the covered revenue when the price at harvest is higher than the price projected prior to planting. HPO insurance makes a payment when revenue at harvest is less than the covered revenue. Covered revenue depends in part on the coverage level elected by the individual farm. Coverage levels vary from 50% to 85% in 5 percentage point increments.

Use of HP: HPO use is high among farmers. Revenue Protection (RP) has HPO while RP with harvest price exclusion (RP-hpe) does not. The other major farm level insurance product is YP (Yield Protection) yield insurance. For corn in 2016, 92% of acres insured with these 3 insurance types were in RP having HPO (see Figure 1). RP-hpe was elected for less than 1% of corn acres. The remaining 7% of corn acres were insured with YP. Election of RP is overwhelming. A similar pattern exists for soybeans (91% RP use), wheat (87% RP use), sorghum (84% RP use), and cotton (81% RP use). Rice has the lowest use of RP at 35%. RP-hpe is used even less (5%) for rice. YP is the most often used insurance type for rice (62%). Farmers pay a higher premium to obtain HPO protection. Their widespread use of HPO indicates that they value it. 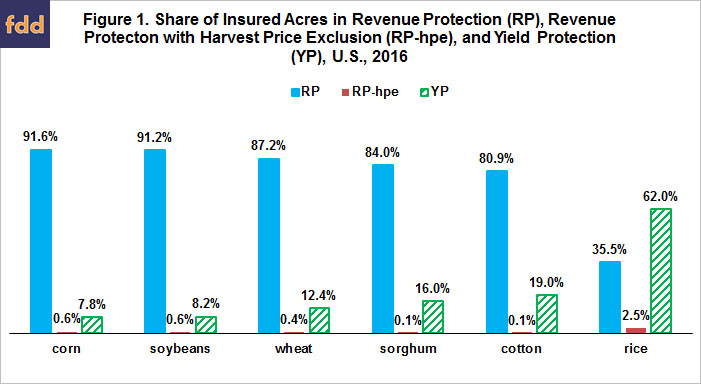 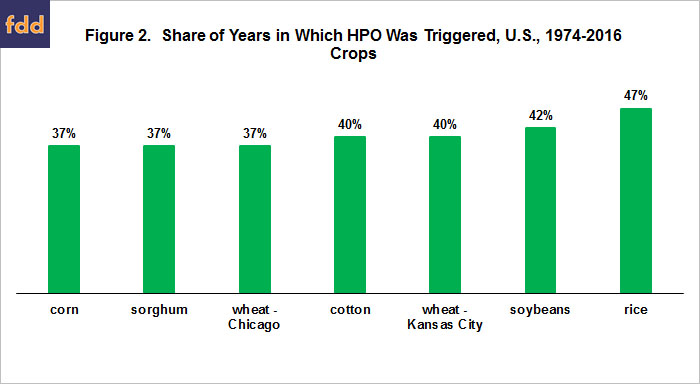 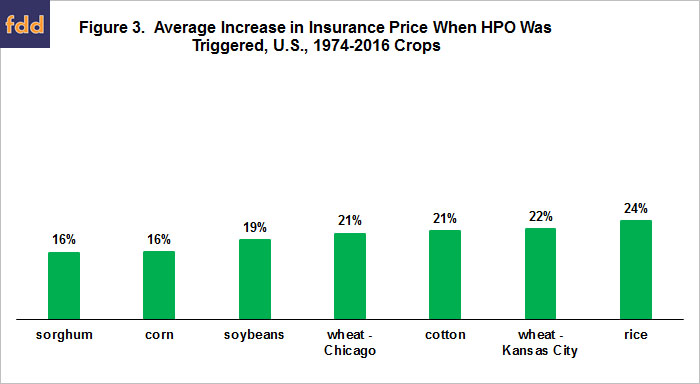 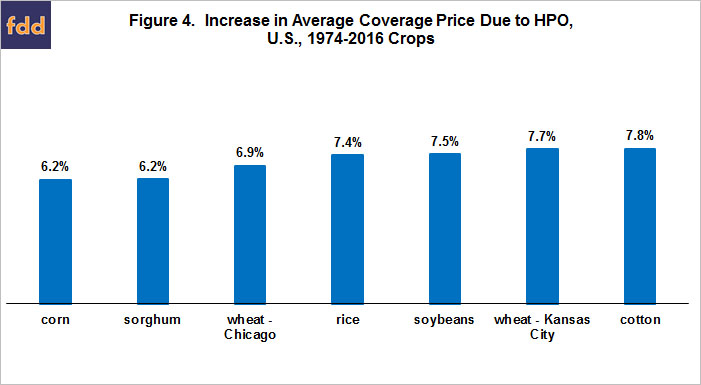 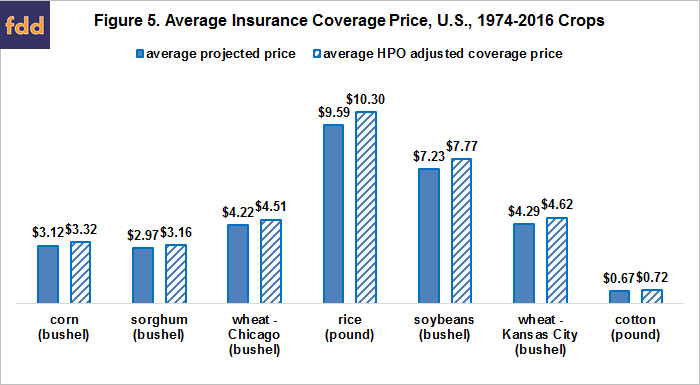 HPO’s Impact on Payments: It is important to note that payment by HPO insurance requires that yield must decline, with the amount of decline dependent on the coverage level elected by the farm. Thus, the impact of HPO on payments depends on the joint occurrence of a higher insurance price at harvest and a harvest yield that is less than the guaranteed yield. Often actual yields on farms will be below guarantee yields when there are widespread yield shortfalls across the U.S. A widespread yield shortfall in the U.S. provides a potential impetus for the harvest price to be above the projected price. To illustrate, projected yield for a crop was set equal to that year’s in-sample linear trend yield estimate (see data note 1). For corn, U.S. yield at harvest was less than the linear trend yield in 75% of the years that harvest price was higher than projected price. This share for the other crops was 50% for rice; 53% for cotton; 56% for wheat-Chicago; 59% for wheat-Kansas City; 61% for soybeans; and 63% for sorghum. This relationship provides the “marketing” rationale for HPO as it provides protection for farmers who forward sell crops and for farmers who feed their crops and would need to buy grain at a higher price. HPO provides a replacement value for the crop in these situations.

Data Notes: (a) Data for production and acres are from Quick Stats (U.S. Department of Agriculture, National Agricultural Statistics Service). (b) Yield per planted acre for cotton, rice, soybeans, and wheat equals crop year production divided by acres planted to the crop in the crop year. For corn and sorghum, production is divided by planted acres minus acres harvested for silage. This calculation assumes all non-harvested corn and sorghum acres were intended for grain production. (c) A linear time-trend regression is estimated for each crop using U.S. yield per planted acre for the 1974 through 2016 crop years. The estimated regression equation is used to derive the linear trend-line yield for each year between 1974 and 2016. These within sample regression derived trend-line yields are used as the crop’s expected yields.

The authors thank Art Barnaby of Kansas State University for his extensive and useful comments on earlier drafts of this article.