Today’s post provides the third quarter update on RIN generation for 2017. The previous 2017 RIN updates (May 17, 2017 and August 3, 2017) provided a summary of RIN generation through the first and second quarters of 2017. Gross RIN generation figures from EPA’s EMTS through September of 2017 are used with available biofuel export data from the Energy Information Administration (EIA) and the Department of Commerce (USITC) to compare net RIN generation with the target mandate levels outlined in the RFS final rulemaking for 2017. 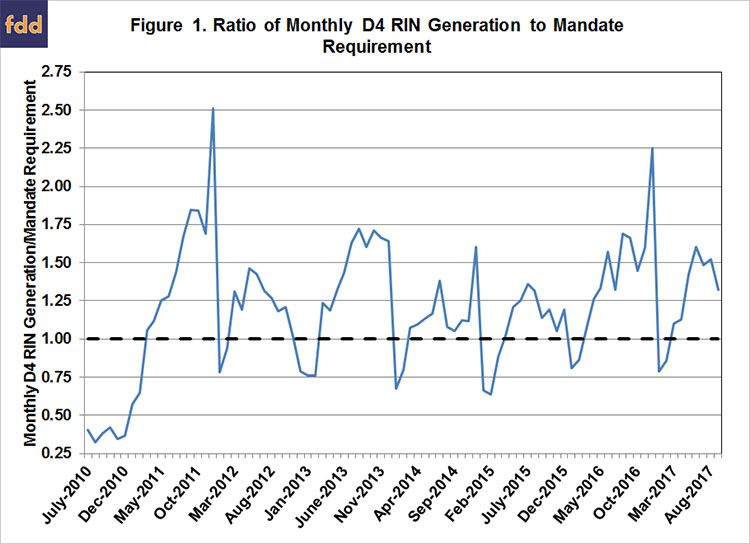 Figure 2 plots D6 RIN generation relative to implied mandate needs through September 2017. Monthly gross generation was relatively steady through the first half of the year averaging just over 1.23 billion per month. Generation in the third quarter increased to an average of 1.27 billion D6 RINs per month. The gross generation projection for the year would currently be very close to 15 billion RINs. Department of Commerce data on exports of denatured ethanol for fuel use through August are reported at 285 million gallons for the year. The pace of exports increased during the third quarter, resulting in an increase in projected exports for 2017 representing 427 million D6 RINs. Accounting for exports results in a net generation estimate of approximately 14.5 to 14.6 billion D6 RINs, which would fall 400 to 500 million RINs short of the 15 billion non-advanced or renewable mandate component for 2017. 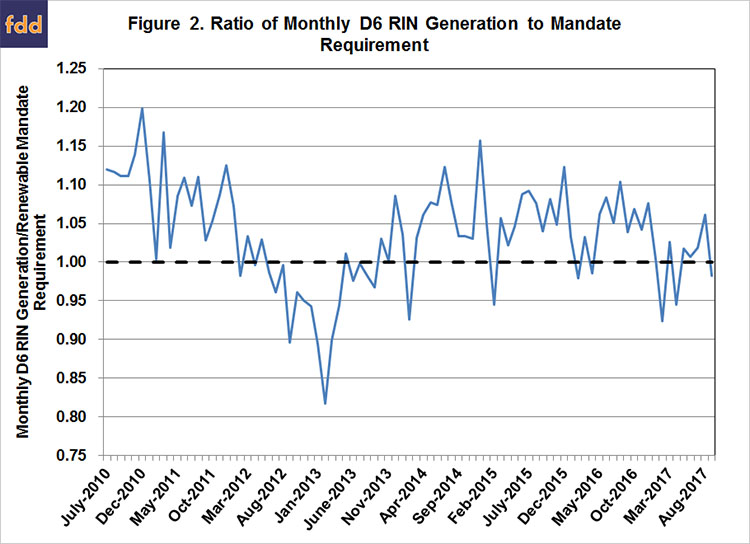 In summary, gross generation of RINs across all D-codes have consistently increased each quarter during 2017. The increase in generation of D4 and D5 RINs looks likely to be sufficient to meet non-cellulosic advanced mandate needs in 2017. However, generation of D3 and D7 RINs is still projected to fall short of the 2017 cellulosic mandate by 90 to 100 million gallons, and net generation of D6 RINs is projected to fall short of the renewable mandate component by 400 to 500 million RIN gallons. If the pace of RIN generation and/or exports do not adjust over the fourth quarter to result in sufficient 2017 RINs, the use of existing RIN stocks may be needed for 2017 compliance purposes.