For those counties in which payments will be received, farmers and land owners will soon receive Agricultural Risk Coverage (ARC) and Price Loss Coverage (PLC) payments related to 2016 production. The level and size of the ARC-CO payments are described in an October 6, 2017 farmdoc daily article. In this article, we turn attention to 2017 ARC-CO payments, which will be received in 2018. Benchmark prices will be down for corn, soybeans, and wheat. Given current price projections, county yields below the five-year Olympic average will trigger payments. Many counties likely will receive ARC-CO payments on wheat.

Agricultural Risk Coverage at the county level (ARC-CO) makes payments when a county’s revenue is below the benchmark revenue (see farmdoc daily, February 20, 2014 for more background). County revenue equals county yield as determined by the Farm Service Agency (FSA) times the Market Year Average (MYA) price. The MYA price is a national price determined by the U.S. Department of Agriculture for a marketing year. The marketing year begins in September and ends in August for corn and soybeans. For wheat, the marketing year is from June through the following May.

This Olympic averaging process is illustrated for the calculation of the $3.95 benchmark price for corn in 2017. The 2017 benchmark price is based on reference-price-limited-MYA prices from 2012 to 2016:

Benchmark Prices for Corn, Soybeans, and Wheat over Time 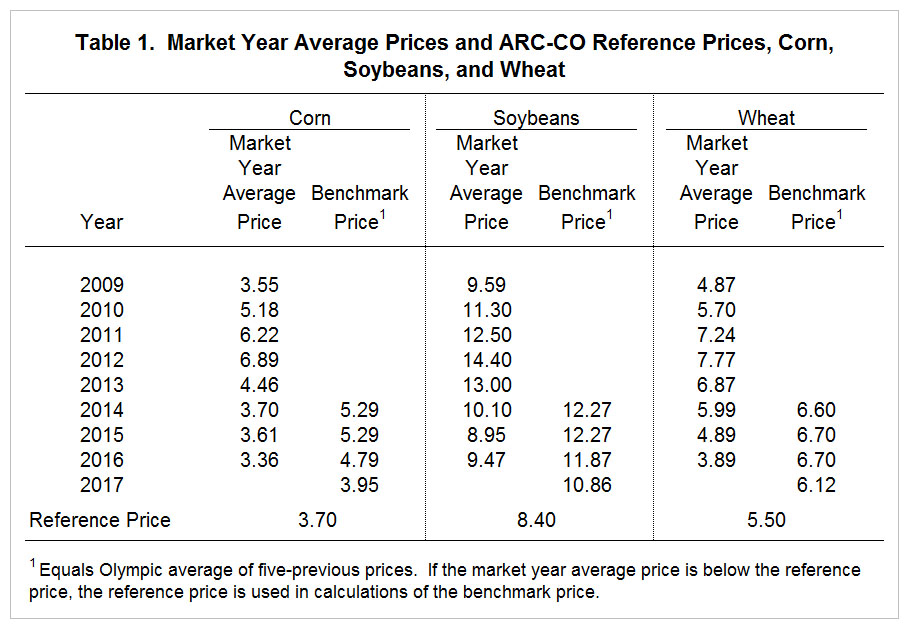 MYA for corn and soybeans will not be known until September of next year. Estimates of MYA prices can be obtained from monthly World Agricultural Supply and Demand Estimated (WASDE) reports released each month by the Office of the Chief Economist, USDA (https://www.usda.gov/oce/commodity/wasde/). The midpoint of the price range in those reports serve as estimates of MYA prices. In the September report, midpoints of the WASDE range are:

Based on the above midpoints, the 2017 yield relative to the 2017 benchmark yield that would trigger ARC-CO payments can be calculated. The equation for making this calculation is:

Those values for the three crops are:

For corn, payments will occur when the 2017 county yield is below 1.06 times the benchmark yield, given a $3.20 MYA price. For many Illinois counties, yields are projected to be near average this year. Because of recent increases in benchmark yields, near average yields will cause some counties to have payments for 2017. For some counties, those payments could be in the $40 range.

For soybeans, payments will occur when 2017 yields are below 1.02 times the benchmark yield, given a 2017 MYA price of $9.20. Soybean yields are near average, which could trigger some 2017 ARC-CO payments. In general, payments will be less than $20 per acre.

For wheat, payments will occur when 2017 yields are below 1.17 times the benchmark yield, given that the 2017 MYA price is $4.60. There appears to be good chances of wheat payments in many areas for 2017.

At this point, ARC-CO payments for 2017 corn and soybeans will likely occur if actual county yield equals or is less than the county’s benchmark yield. ARC-CO payments for wheat are more likely as an actual yield that is somewhat larger than the benchmark yield will likely trigger payment. Significant uncertainties even with these conditional statements. The outlook for 2017 payments will come into clearer focus when NASS releases their estimates of county yields in late February.