Potential trade disputes are approaching from all directions with significant implications for American agriculture. To the north and south, the US government is renegotiating the North American Free Trade Agreement [NAFTA] with Canada and Mexico. Just last week, the three countries met in Ottawa, with many thorny issues yet to be resolved. Also last week, the US imposed a tariff of almost 220 percent on certain models of aircraft produced in Canada. West, after withdrawing from Trans-Pacific Partnership [TPP] negotiations that would have affected trade across the pacific, the government has further threatened to pull out of the US-South Korea trade agreement. The US is also considering imposing tariffs on steel imports, a move aimed at China, but which also opens up disputes to the east, specifically with Germany, Turkey, and the UK. Many of these disputes are not about agriculture, but agriculture may be affected by the fallout. In particular, even non-agricultural disputes can generate retaliatory tariffs on our agricultural exports. History provides very clear examples as to how trade disputes impact agriculture.

Retaliatory tariffs are how countries respond to other countries’ policies that have been found to distort trade, and that harm their domestic industry. Whenever a country enacts a new policy that may affect trade, its trading partners who are affected the most may threaten to impose tariffs in retaliation. Trade-distorting policies may include a nation deciding to pull out or rescind trade agreements (often to avoid WTO sanctions). These retaliatory tariffs, or import taxes, are meant to coerce or convince the instigating nation to reverse their policy, plus the tariffs garner income for the retaliating country. Retaliating nations can put tariffs on any export product they import from the targeted country – the products do not need to bear any relation to the industries affected by the initial trade-distorting policy. The WTO states that retaliatory measures need to stay within the same sector, defined as: Services (Business, Financial, Distribution, Educational, Communications, etc.), Intellectual Property, and Goods (the main thing we think of when it comes to trade). When it comes to the goods sector– if a tariff on automobiles distorts trade, the retaliating nation need not target automobiles specifically, and can target any good(s)–often those targets include agriculture.

Unlike other tariffs, these retaliatory tariffs can be sanctioned by the World Trade Organization [WTO] as legal penalties for trade-distorting policies. These tariffs are the last and final step in any WTO trade dispute as tariffs harm consumers in the country that imposes them as well as the country imposing the trade-distorting policy. In short, this action is often harmful to all nations in the dispute and most disputes don’t reach this stage for this reason. However, when they do reach the retaliation stage, the cost of retaliation can be in the billions of dollars. This money comes both directly and indirectly out of the consumer’s pocket, as markets shrink for US products and the cost of the tariff is passed to the producer. Given US agriculture’s reliance on international markets, and being an industry with political clout, agricultural products are often high on the list of products targeted in retaliatory tariffs.

Many nations will target US agriculture for retaliatory measures. Retaliatory tariffs are most often strategically aimed at politically sensitive goods. Most nations have a sound understanding of the political climate in the US and know how our election system works–they will target swing states–and seek to create rifts between parties. They also target goods explicitly to make reelection/governing more difficult for the party who enacted the policy. This effect was most noticeable in 2002 when President George W. Bush enacted tariffs on imported steel from Europe, Asia, and South America. The nations that felt the greatest effect of this were Brazil, China, Germany, Japan, South Korea, and Taiwan. In response, the European Union announced that it would impose retaliatory tariffs on oranges and orange juice from the state of Florida and cars made in Michigan–two critical swing states in the 2004 presidential election. The EU is also threatening to do the same in response to President Trump’s proposed tariffs on steel imports, targeting Florida orange juice again. Mexico targeted their border states (which carry significant electoral votes) California, Texas, and Arizona in 2009’s NAFTA dispute over trucking, and Canada routinely targets products produced in their border states of Michigan, Washington, Wisconsin. These Border States are targeted specifically due to the volume of exports sent to the respective country, and the fact that these border states will be particularly dependent on export industries that sell to their neighboring country.

All of this matters for agriculture because agriculture relies on trade. The US is the number one exporter of agricultural products in the world, with more than $135 billion (20%) of production exported. In response to the US’s 2009 suspension of the NAFTA trucking program, Mexico targeted $2.4 billion of US goods. These goods included 90+ products from 40 states that faced 10-45% tariffs, hitting California the hardest. Mexico released an official list of 99 goods it was targeting in 2009–51 of those goods were agriculture-related, or 51.5% of their list. There was a 45% tariff on table grapes, 20% tariff on almonds, juices, wines, pears, paper products, and Christmas trees. All of these tariffs replaced a negotiated zero-percent tariff. In the case against the US cotton program, Brazil went after $800 million in US goods, plus $300 million in sanctions in 2010. Of the 102 goods targeted by Brazil in 2010, 26 (25.5%) had direct ties to agriculture. Cotton faced a 100% tariff; up from only 6% for neither carded or combed and up from 8% for carded or combed. Fresh & dried fruits (pears, grapes, cherries, plums), walnuts, and soy oil faced 30% tariffs, up from 10%–a 200% increase. Tariffs on potatoes went from 14% to 34% and tariffs on hazelnuts went from 6% to 26%. Canada also targeted agricultural products stemming from the US’s Country-of-Origin Labeling [COOL] rules in 2013. In retaliation, Canada went after all beef and pork products exported from the US, apples, cherries from Michigan & Washington, and cheese from Wisconsin. 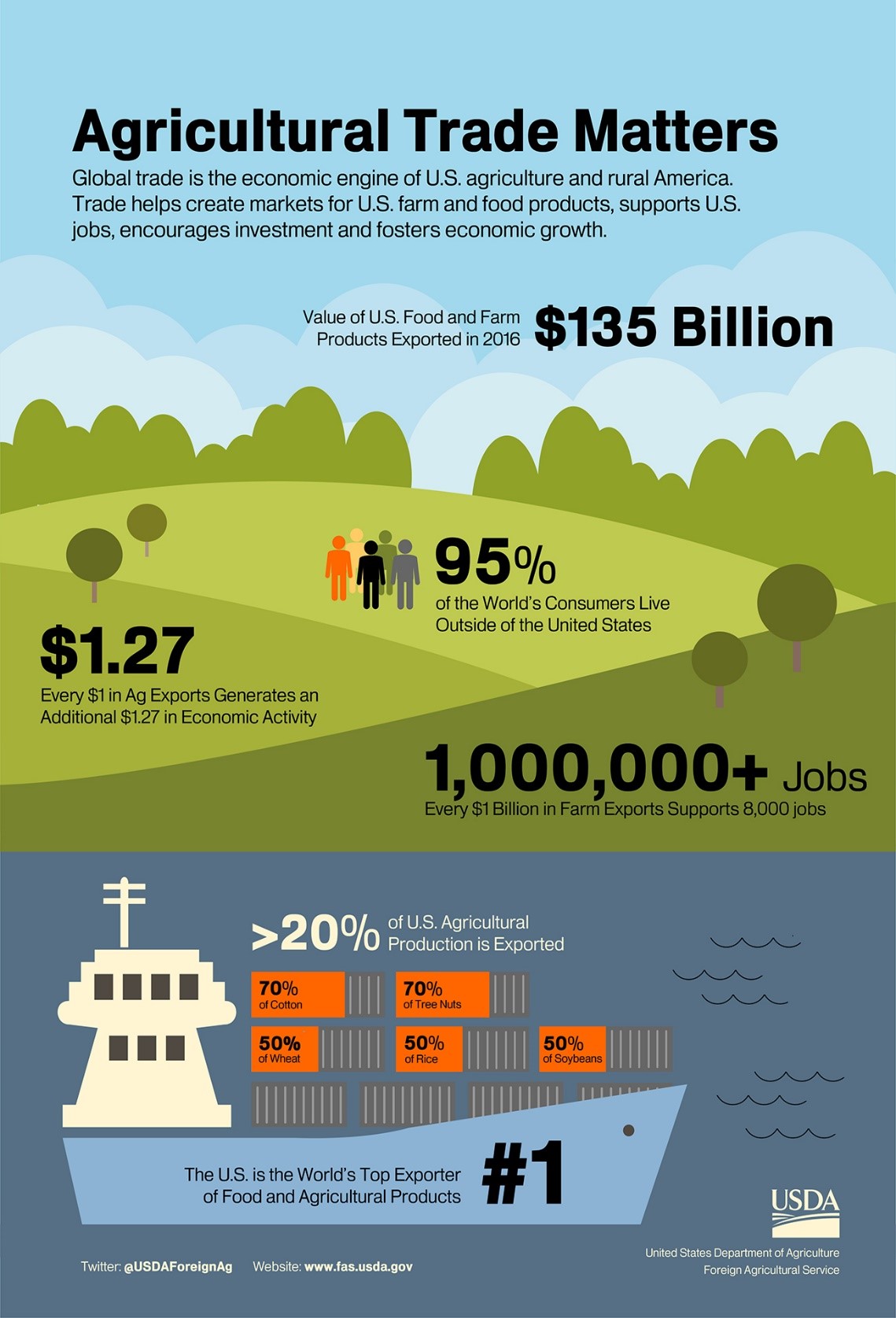 The bottom line is that almost all trade disputes impact American agriculture, and usually farm products are on the front lines of retaliation. While agriculture makes up a small percentage of overall US exports, the industry is substantially reliant on trade and is seen to have considerable domestic political influence. For this reason, when disputes arise, most countries are quick to retaliate against US agriculture. Targeting products from politically sensitive states and industries, often racking up billions of dollars in taxes which are direct costs to consumers. In conclusion, a trade dispute that doesn’t directly involve agriculture or an agriculture-related product(s) will more often than not drag agriculture into it –especially given the frequency which nations come after US agriculture in return.