On September 26, 2017, the Environmental Protection Agency (EPA) issued a Notice of Data Availability seeking comment and data on potential reductions to the 2018 biomass-based diesel (BBD), advanced biofuel, and total renewable fuel volumes (NODA). The NODA is notable in part because it was issued roughly two months after the U.S. Court of Appeals for the D.C. Circuit ruled against EPA’s attempt to expand its waiver authority under the Renewable Fuels Standard (RFS) (see, farmdoc daily, August 18, 2017). This article reviews the first of the issues raised in the NODA.

EPA’s regulatory procedures indicate that a NODA should be used to provide notice to the general public about data that EPA has developed or that it has received on a particular issue. It is used especially for new data that EPA is considering in the development of a new regulation but it can also relate to a rule that has already been proposed. EPA’s revised policy clarifies that a NODA should only be used to “announce the availability of the new data and should not otherwise propose or identify additional regulatory alternatives or change the original proposed rule” (EPA’s Action Development Process, March 2011). The recent NODA seeks data, as well as provides notice and an opportunity to comment on “potential options for reductions in the 2018 biomass-based diesel, advanced biofuel, and total renewable fuel volumes, and/or the 2019 biomass-based diesel volume under the” RFS.

As an additional background matter, it is clear from the document that this NODA is the direct result of concerns, requests and comments that EPA received in response to the proposed rule for the 2018 (and biomass-based diesel for 2019) volume requirements (EPA Proposed Rule, July 21, 2017). The NODA, however, refers only to comments from the oil industry and specifically those from the American Fuel and Petrochemical Manufacturers (AFPM), the American Petroleum Institute (API) and Valero (see, regulations.gov docket folder).

The NODA raises use of three different waiver authorities in the RFS statute to reduce mandated volumes; this article reviews only the first of the three. EPA is looking again at the waiver based on a finding of inadequate domestic supply. These three little words in the statute were the focus of the recent appellate court decision. That decision provides clear guidance on the matter and is used extensively in this discussion (see, Americans for Clean Energy v. EPA, 865 F.3d 691, 2017 U.S. App. LEXIS 13692 (D.C. Cir., 2017)).

As a threshold matter, any waiver to reduce mandated volumes must be balanced against the core Congressional intent when it passed the RFS. The appellate court was clear on this point. Congress intended the RFS to create demand and force the market to increase consumption of renewable fuels. In the words of the court:

The market-forcing design is the north star of the RFS; all decisions by EPA in the implementation of the mandate are to be guided by it.

The NODA signals that EPA may again be considering a novel interpretation of the three words in the statute (see farmdoc daily, January 7, 2016, January 14, 2016, and January 22, 2016). Previously, EPA attempted to interpret the word supply to include demand-side factors such as the ethanol E10 blend wall. It referred to these demand factors as factors affecting the supply to the ultimate consumer. The appellate court overwhelmingly disagreed. The court concluded that the only reasonable interpretation of the phrase was the adequacy of the supply of renewable fuels to the obligated parties: refiners, blenders and importers. The court differentiated between permissible supply-side factors and impermissible demand-side factors and a table breakdown of the factors is reprinted here. 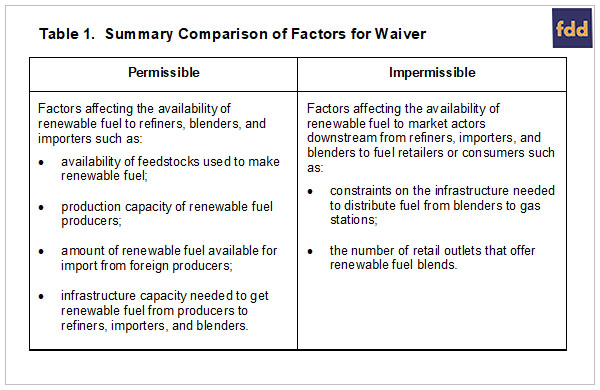 EPA’s previous interpretation of the waiver authority effectively expanded the word to include demand factors. The NODA raises the potential of another novel interpretation of the word supply, this time in terms of production. Specifically, EPA is seeking comment on whether its determination of the adequacy of domestic supplies of renewable fuels should “consider only whether there was an adequate supply of domestically produced volumes to satisfy the statutory volume requirements” (NODA, at 46177). While stated as an effort at defining the word domestic, it is more accurately a revision of the phrase inadequate domestic supply of renewable fuels to inadequate domestic production of renewable fuel.

This interpretation purposefully narrows the scope of domestic supply. The waiver authority is based on the adequacy of supplies of renewable fuels in the domestic market. While that obviously includes domestic production, it unreasonably narrows the phrase to restrict its meaning to only that part of the domestic supply that has been domestically produced. The recent appellate decision on the waiver clarified that the permissible factors for the waiver are those that affect the availability of renewable fuel to obligated parties (refiners, blenders, and importers). Among those permissible factors for determining whether domestic supplies are adequate is the amount available from imports. A reasonable reading of the court’s decision would be that imports of BBD can be considered as part of the total domestic supply of that fuel. It would not seem to support a reading that reduces the word supply to include only BBD produced in the U.S.

EPA repeatedly highlights the comments and concerns from the oil industry commenters that the phrase inadequate domestic supply should be considered in light of the Congressional intent that the RFS improve U.S. energy independence and security. They raise, and EPA seeks information on, concerns that include greater stability and certainty, as well as the potential costs of imported BBD. The issue raised may make for an interesting point; it may also be too clever by half.

The preamble for EISA 2007 does state, in part, that the goal is to “move the United States toward greater energy independence and security, to increase the production of clean, renewable fuels” (see, EISA 2007 Preamble). The method by which Congress sought to achieve that goal was, again, to mandate the blending of increasing volumes of renewable fuel into domestic transportation fuels — the market forcing policy mechanism. EPA’s implementation should certainly seek to increase domestic production of all biofuels in the mandate; on that there is no doubt. The problem, however, would be using that goal as part of the justification for reducing the mandates via the waiver provision. Doing so turns the Congressional intent against itself, using the goal for energy independence and security to reduce the pressure on the market to increase demand. The only way this might make sense is if imports of BBD were found to be taking away market opportunities for domestic BBD production, damaging the industry. In that scenario, however, the solution best in line with Congressional intent would be to increase the mandated volumes to make room for additional domestic BBD. Reducing the mandate would seem counterproductive for both the domestic industry and the goals of the statute.

Finally, presuming that a court concluded that the phrase inadequate domestic supply included only that part of the supply domestically-produced, the interpretation likely fails to support use of the waiver to reduce the mandate. In the July 21, 2017, proposed rule EPA noted that it determined in October 2016 that production capacity “at registered facilities in the United States was approximately 4.2 billion gallons” (Proposed Rule, at 34236, footnote 105). The applicable volumes for 2017 and 2018 were, respectively, 2.0 billion gallons and 2.1 billion gallons. Thus, even accepting EPA’s novel interpretation of the waiver authority EPA’s own findings would not support a waiver because there is sufficient domestic capacity to meet the mandate. Instead of justifying a reduction in the mandated volumes, it may well be that EPA should increase them and force the market to figure out how to use more BBD.

EPA’s issuance of the recent Notice of Data Availability raises significant questions about whether the agency is a contemplating another effort at expanding its RFS waiver authority through novel interpretation of the statute. An appellate court has recently made it clear that EPA should be guided by Congressional intent embedded in the market-forcing policy it passed. That first round expanded the term supply to include demand factors and was rejected; the second round narrows the term supply to include only domestic production. If EPA continues this course, does it mean that the RFS is headed for further litigation and EPA for another defeat in court? Interested parties have until October 19, 2017, to submit comments.