U.S. farm safety net policy is evolutionary (Zulauf and Orden). One evolutionary trait is updating reauthorized programs to reflect not only performance issues but also changes in markets, budget constraints, the political process, and policy objectives since the last farm bill. For example, target prices and loan rates have been routinely adjusted to reflect changes in market prices of both individual crops and all crops. This article examines the impact of the decline in market prices since 2012 on the design of the ARC-CO (Agriculture Risk Coverage – county) program.

Market – Policy Situation: (1) ARC-CO is a revenue based program, where a decline in revenue that triggers assistance is defined as county revenue less than 86% of benchmark market revenue based on the 5 prior crop years (ARC-CO is discussed further in data note 1). (2) When the 2014 farm bill was enacted, large market price declines were expected for many crops, including corn, soybeans, and wheat (see Figure 1). (3) However, prices are currently expected to remain relatively stable over the crop years associated with the next farm bill (see Figure 2). 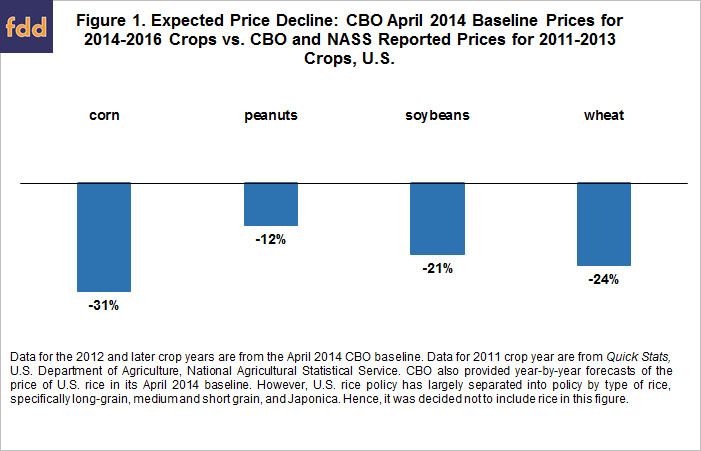 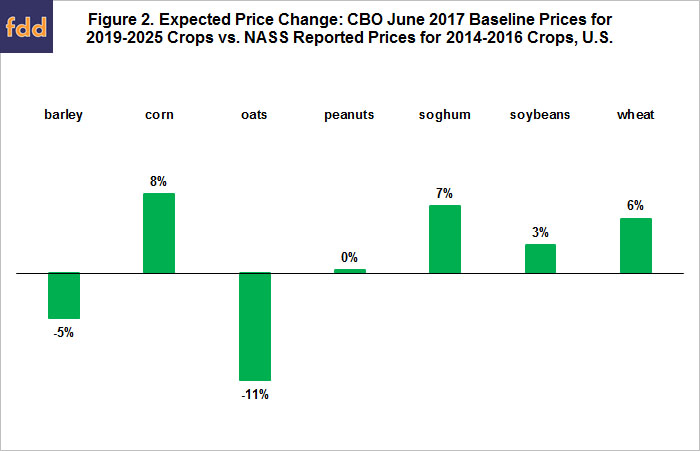 Impact on ARC-CO: Due to the change in market price behavior, ARC-CO is expected to pay less per base acre for most crops over the new farm period than it has paid over the 2014-2016 crop years (see Figure 3). Payment per base acre averages -37% less across the 6 crops in Figure 3, with corn, soybean, and wheat payments expected to decline -75%, -18%, and -58%, respectively. Payments are expected to increase only for barley. The forecasted payments for the 2019-2025 crop years, the expected time frame of the next farm bill, are from the June 2017 CBO (Congressional Budget Office) baseline. 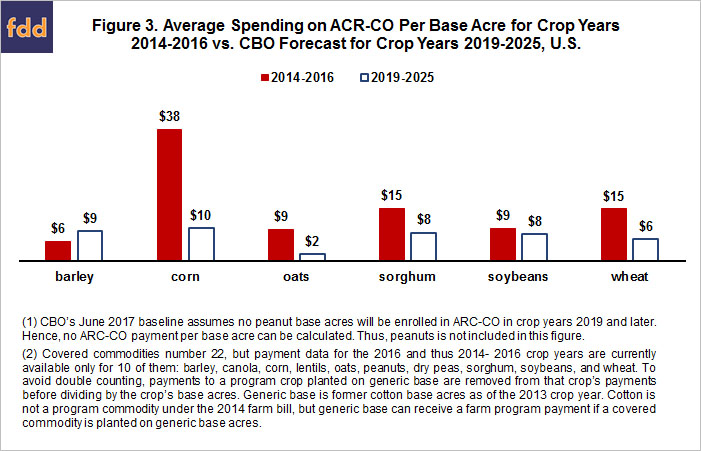 (1) ARC-CO’s benchmark revenue is calculated using 5-year Olympic averages (high and low values removed) of U.S. crop year price and county yield. Payment thus is determined on a county-by-county, not national basis. Payment is made on 85% of base acres. Per acre payment is capped at 10% of benchmark revenue. A limit exists on the market orientation of ARC-CO. If average price for a crop year is at or below a crop’s reference price, the reference price replaces the crop year price in determining the 5-year Olympic average price in the revenue benchmark. Thus, the reference price is a floor on the price used to calculate the revenue benchmark. An individual farm version of ARC also exists, commonly designated ARC-IC. Participation in ARC-IC accounts for less than 1% of all U.S. base acres.