As reported by Illinois Farm Business Farm Management (FBFM), capital purchases on Illinois grain farms increased from the mid-2000s to 2013, reaching a high of over $130 per acre. Since 2013, capital purchases have decreased to about $60 per acre in 2016 (see Figure 1). 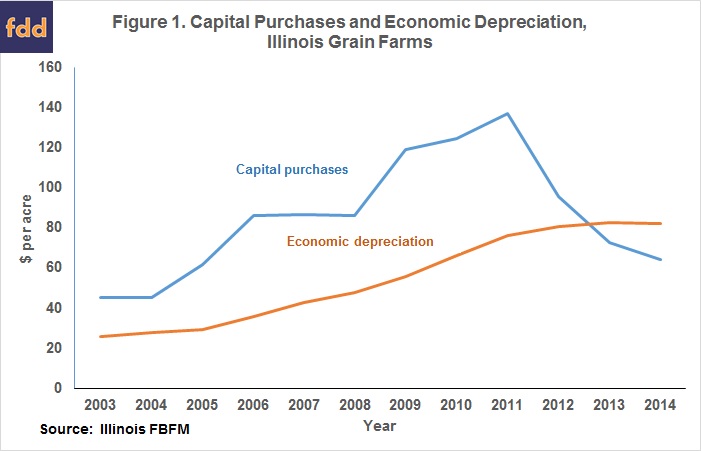 Economic depreciation differs from depreciation used for calculating income taxes. Tax depreciation often is calculated using schedules which depreciate capital items quickly. Moreover, many grain farms use section 179 expensing and bonus depreciation. Section 179 expensing allows up to $510,000 of capital purchases made in 2017 to be deducted immediately. In some cases, 50% bonus depreciation comes into play when the section 179 deduction has been reached. Often, all or a significant portion of capital purchases are used to reduce income in the year purchase. In those cases, there is little deprecation remaining over the remaining life of the capital item.

As compared to tax methods, economic depreciation schedules typically spread out depreciation over a longer period. To Illustrate, the economic depreciation schedule used by FBFM for a typical $100,000 piece of farm machinery is $6,250 in the first year of service, $11,720 in the second year, $10,250 in the third year, $9,570 in the fourth through the tenth year, and $4,790 in the eleventh year. For tax purposes, the full $100,000 of the machine may have been deducted in the first year using section 179 expensing.

Comparison of Tax and Economic Depreciation

This fact is illustrated in Table 1, which shows 2016 values of per acre capital purchases and depreciation for a sample of grain farms enrolled in FBFM. Farms summarized in this table had at least 500 acres and had useable tax and economic depreciation information. There are 546 farms summarized in Table 1 with an average farm size of 1,200 acres. 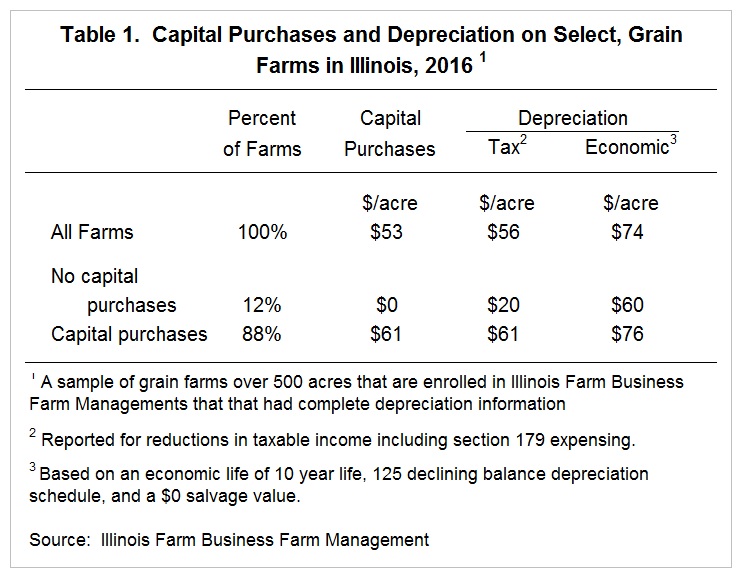