As part of the 2014 Farm Bill, the Farm Service Agency (FSA) awarded funding to the National Coalition for Producer Education (NCPE), led by the University of Illinois, and the National Association of Agricultural and Food Policy (NAAFP), led by Texas A&M University and the University of Missouri, to develop online tools to help producers make their program choice decisions. This was a rare provision of resources in the farm bill for education and outreach efforts. In this post, we discuss how farmers and landowners evaluated the decision tools (the Farm Bill Toolbox) developed by the University of Illinois team. Results presented are based on the article recently published by Ellison et al. (2017) in Applied Economic Perspectives and Policy.

Justification for Mandatory Decision Tool Funding in the 2014 Farm Bill

Unlike previous farm bills, the 2014 Farm Bill required farmers and landowners to make a set of one-time, irrevocable decisions lasting the life of the farm bill. During the election process, farmers and landowners could choose to update their program yields and/or reallocate their base acres and were required to choose between the Price Loss Coverage (PLC) and Agriculture Risk Coverage (ARC) programs. For a more in-depth discussion of the 2014 Farm Bill decisions and program options, see Taylor et al. (2017).

Recruitment and Characteristics of Study Participants

We recruited farmers and landowners to participate in our study in fall, 2015. We sought to reach farmers and landowners across geographic regions and include all program crops and farm sizes, with recruitment emails and announcements disseminated by several means. As some of you may recall, we posted a link to the survey on our farmdoc daily website (farmdoc daily, August 26, 2015) and sent an email to the website’s mailing list. We also requested dissemination by several commodity and producer groups including the American Farm Bureau Federation, the National Farmers Union, the National Corn Growers Association, the American Soybean Association, the National Association of Wheat Growers, and the National Cotton Council. The most successful recruitment strategy, however, was dissemination of the survey by FSA to its comprehensive list of U.S. farmers and landowners.

The survey was administered online. To be eligible for participation, a respondent had to (1) consent to participate; (2) be a farmer and/or a landowner; and (3) have involvement in the 2014 Farm Bill decision making process. Farmers and landowners were asked questions about their 2014 Farm Bill decisions, including any resources they consulted to make these decisions as well as questions related to personal (e.g., age, education level) and farm (e.g., size, crops grown) characteristics. 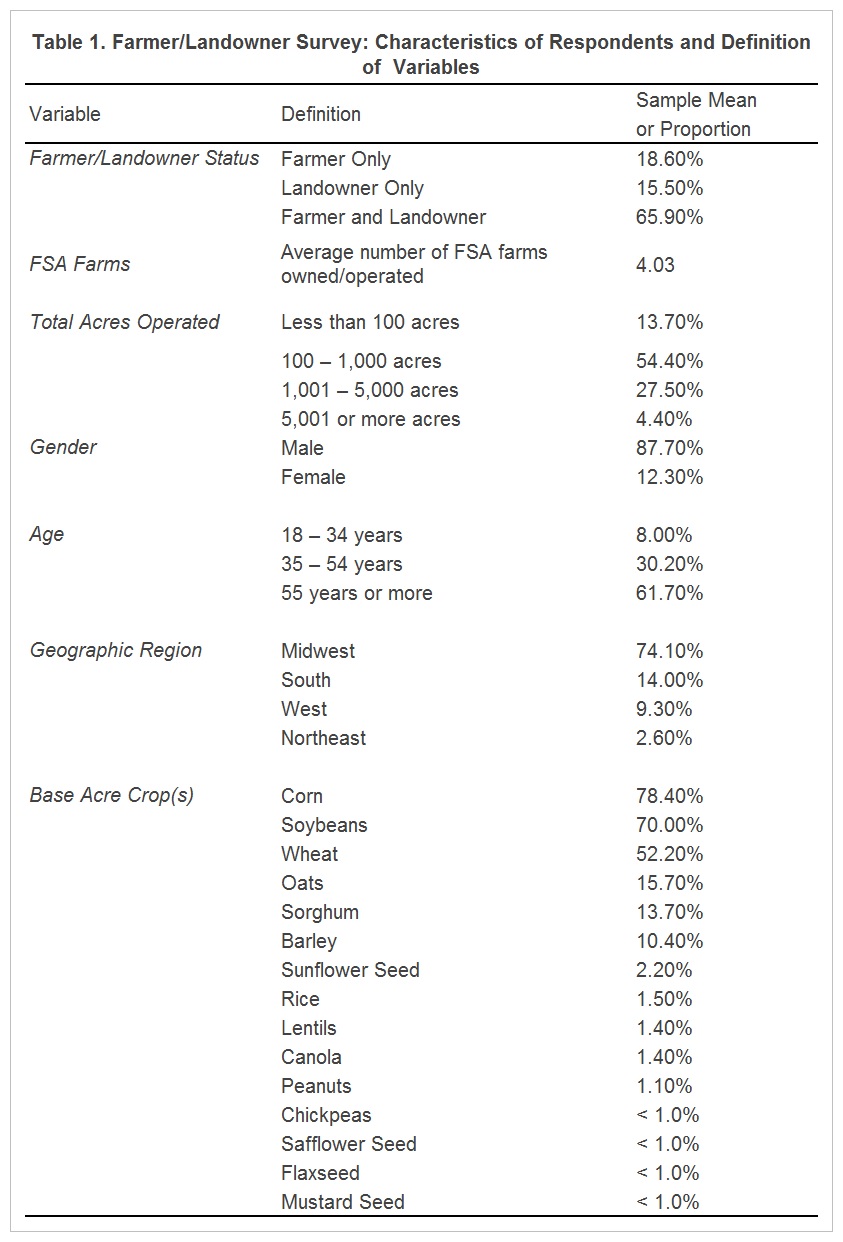 Farmer/Landowner Use and Evaluation of Decision Tools

Another way that producers evaluated the decision tool was to provide their willingness-to-pay to use a decision tool like this for future farm bills. This is not to say that producers will have to pay to use such tools in the future. Rather, our goal was to identify the monetary value farmers and landowners placed on having the tool. We found that, on average, farmers and landowners would be willing to pay $7.32 for access to online decision tools in the future (Ellison et al., 2017). The positive value likely reflects the importance of the information producers derived from the tool, but could also reflect other indirect benefits of tool use.

One important indirect benefit of tool use was time saved – a benefit that accrued to multiple parties, including producers, FSA personnel, other extension specialists, insurance agents, lenders, and professional farm managers. We found that producers who used the tool felt more prepared to make their election decisions and spent less time in the FSA office completing election paperwork on a per-farm basis compared to producers who did not use the tool. This is an important benefit for producers as well as FSA personnel. In addition, the development of a publicly-available tool allowed others who counsel producers on operating decisions (e.g., lenders, insurance agents) to avoid the time cost of building their own tool. Ellison et al. (2017) found that decision tools are one of the most difficult educational resources to develop for extension educators, but they are also one of the best resources in terms of their ability to convey information. Therefore, the development of a centralized resource can reduce time investment while maintaining the critical benefit of information dissemination to producers.

While our primary interest in this study was the online decision tool, we also asked producers about their preferred way to receive information from extension and outreach professionals about future farm bill decisions. These insights can help us better tailor our educational efforts to meet the needs and preferences of farmers and landowners.

The potential sources of information we asked about were decision tools and spreadsheets, in-person meetings, articles (online or in print), webinars, or speaking with a local FSA agent. Producers were asked to rank these educational resources from 1 to 5, where 5=most preferred resource and 1=least preferred resource. We found that while producers value decision tools, they currently have stronger preferences for in-person meetings and talking with their local FSA agent (see table 2 in Ellison et al., 2017). This suggests that decision tools and other online education efforts are unlikely to replace traditional face-to-face extension and outreach efforts any time soon, but we argue they should be viewed as complementary educational resources. With shrinking state budgets, it is increasingly difficult for extension educators to drive across their respective states or regions to deliver content to producers. Migrating some content online can reduce the time cost for educators, and our study shows that a significant proportion of producers are willing to use online decision tools.