In a July 25, 2017 farmdoc daily article, Schnitkey discussed declining cost of production for Illinois corn and soybeans. This article extends the discussion to the U.S. and to barley, peanuts, rice, sorghum, and wheat. Total cost per acre declined between 2014 and 2016 for all 7 crops. Cost declines also appear to be continuing. Assuming nothing else changes, declining costs stimulate production, decreasing prices and potentially increasing payments by fixed reference prices. To manage this scenario, fixed reference prices need to decline when crop sector cost declines.

Data: This analysis uses the cost and return data published by the U.S. Department of Agriculture (see data note). As compiled by USDA, total cost consists of operating costs (seed, fertilizer, chemicals, etc.) and allocated overhead (hired labor, unpaid labor opportunity cost, capital recovery cost, land rent, etc.). Total cost per acre peaked in 2014 for 6 of the 7 crops. Rice is the exception, but its total cost was only $2/acre higher in 2013 than in 2014. The latest year for which cost is not a forecast is 2016. Change in cost thus equals total cost for 2016 minus total cost for 2014. Like any financial variable, it is important to examine declining cost from different perspectives. Two are used in this article: $/acre decline and % decline. 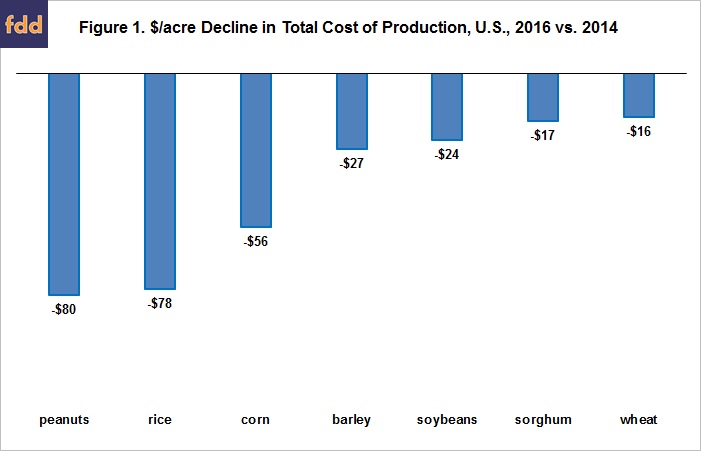 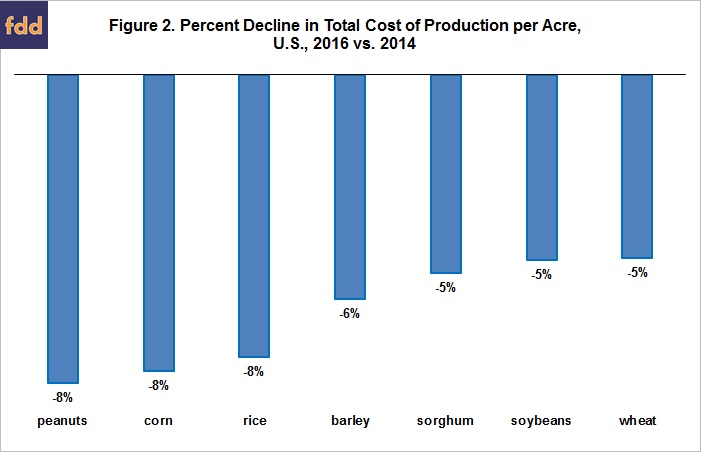 Cost of production data is also published for cotton and oats. It is not used in this analysis because the base year used to determine their costs changed with the 2015 crop. This change in procedures can affect cost in several ways. Thus, costs may not be comparable before and after a change in base year, especially when the period of analysis is short, as in this analysis.