Current fall delivery bids are near $3.60 per bushel for corn and $9.60 per bushel for soybeans. At those prices, high yields are needed for farmers to break-even on cash rented farmland. Alternatively, at trend yield levels, prices need to be above $4.00 per bushel for corn and $10.00 per bushel for soybeans for farmers to break-even. This 2018 situation is roughly the same as in 2016 and 2017. In those two years, both corn and soybean yields were significantly above trend, boosting revenue and causing net incomes on many farms to be positive. Whether above trend yields happen in 2018 remains to be seen. Incomes could turn out to be positive in 2018. However, a scenario with trend yields and prices at current fall delivery bid levels results in very low and perhaps negative incomes on many farms in 2018. 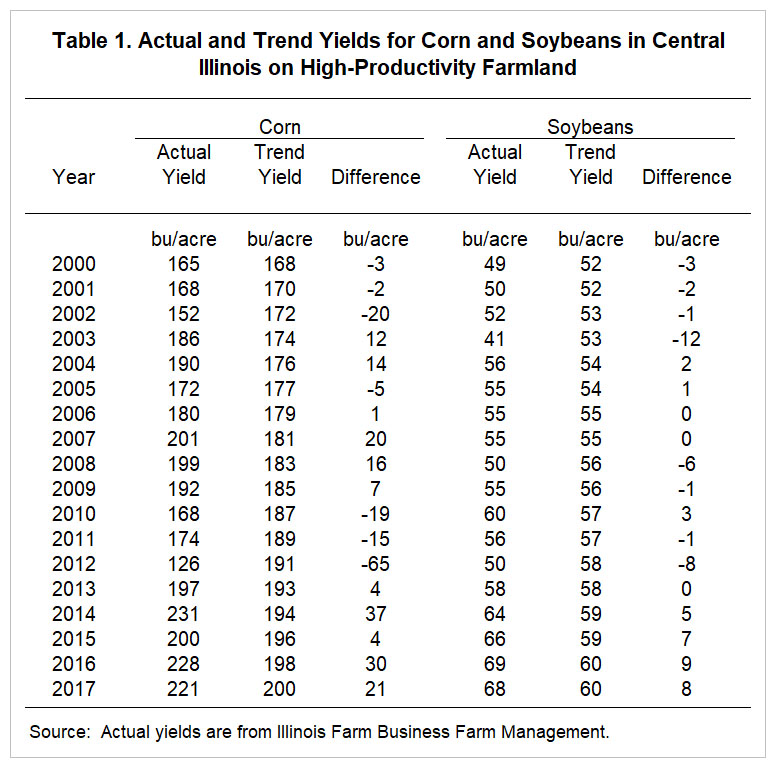 These above trend yields lead to higher revenues. In the past two years, corn averaged 25 bushels above trend. At a price of $3.40, these 25 bushels above trend contributed $85 per acre more to revenue. In 2016 and 2017, soybean yields have averaged 8 bushels above trend. At a $9.50 soybean price, these 8 bushels contributed $76 per acre more to revenue. These additional revenues were calculated without considering the impact that high yields had on crop prices. Above average yields in Illinois lead to higher corn and soybean supplies, which then decrease corn and soybean prices. Even without this consideration, it is important to realize that higher yields contributed to revenue and income in 2016 and 2017. 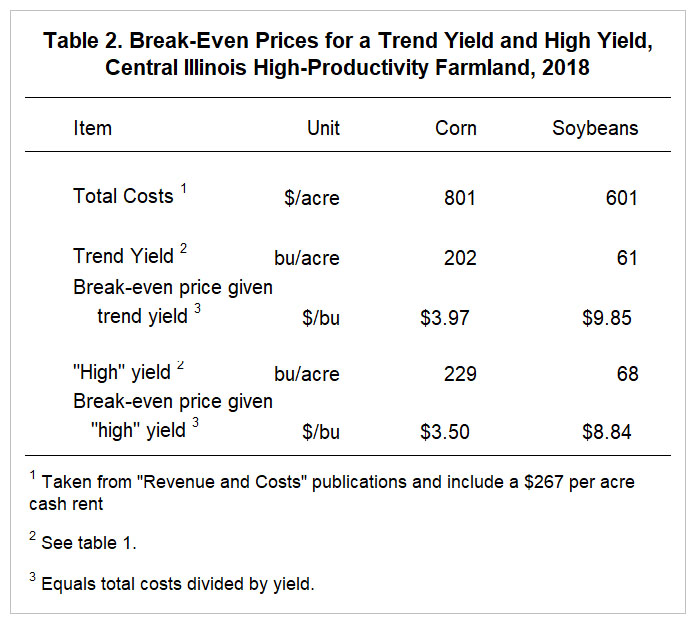 Similar to recent years, expected yields and fall delivery prices during the winter months will result in losses on many farms, particularly those who rent a majority of their farmland. Above-trend yields, higher prices, or a combination of the two could again result in positive returns. Time will tell. Still, it is a rather uncomfortable position to be in where realistic yield and price expectations result in very low incomes.

Schnitkey, G. "Revenue and Costs for Corn, Soybeans, Wheat, and Double-Crop Soybeans, Actual for 2011 through 2016, Projected 2017 and 2018." Department of Agricultural and Consumer Economics, University of Illinois at Urbana-Champaign, July 2017.