When determining rates, the Risk Management Agency (RMA) has a goal of achieving a loss ratio slightly below 1.0. Losses on crop insurance should average slightly less than total premiums over time. However, performance will vary markedly from a loss ratio of 1.0 in any given year. In drought years, for example, loss ratios exceed 1.0 by large margins. Yields and revenues are highly correlated across farms, leading to correlated crop insurance losses, and dramatically different loss performance from year-to-year.

To illustrate, total premiums on soybean policies in Illinois were $163 million in 2016. Farmers paid $69 million, or 42% of total premiums. Given that farms paid 42% of premiums, loss ratios above .42 result in farmers receiving more in payments than farmer-paid premiums. The .42 is a rough gauge as Federal support varies by type of crop insurance and coverage level. Federal support for crop insurance decreases with higher coverage levels. As a result, the .42 breakpoint will vary from farm to farm.

Loss Ratios for Corn and Soybeans in Illinois 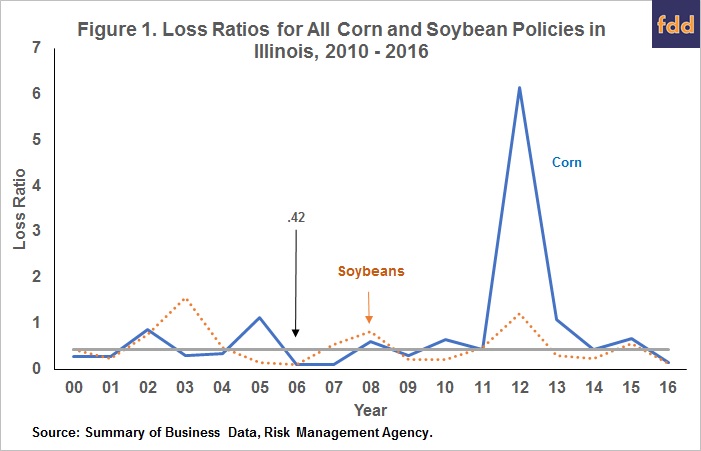 Without considering drought years, loss ratios are fairly close to the .42 value where farmers pay about the same as they receive for crop insurance. It is the inclusion of disaster year that causes crop insurance payments to exceed farmer-paid premium. In the Midwest, the frequency and severity of large droughts have a significant impact on the actuarial performance of crop insurance.

Illinois averages in Figure 1 mask variability in loss ratios across Illinois. Figure 2 shows loss ratios by county for soybean policies averaged over the years from 2000 to 2016. Loss ratios tend to be lower in northern and central Illinois. In these counties, there may be farmers that have received few crop insurance payments on soybeans in recent years. Loss ratios tend to be higher in southern Illinois than in the northern and central Illinois. 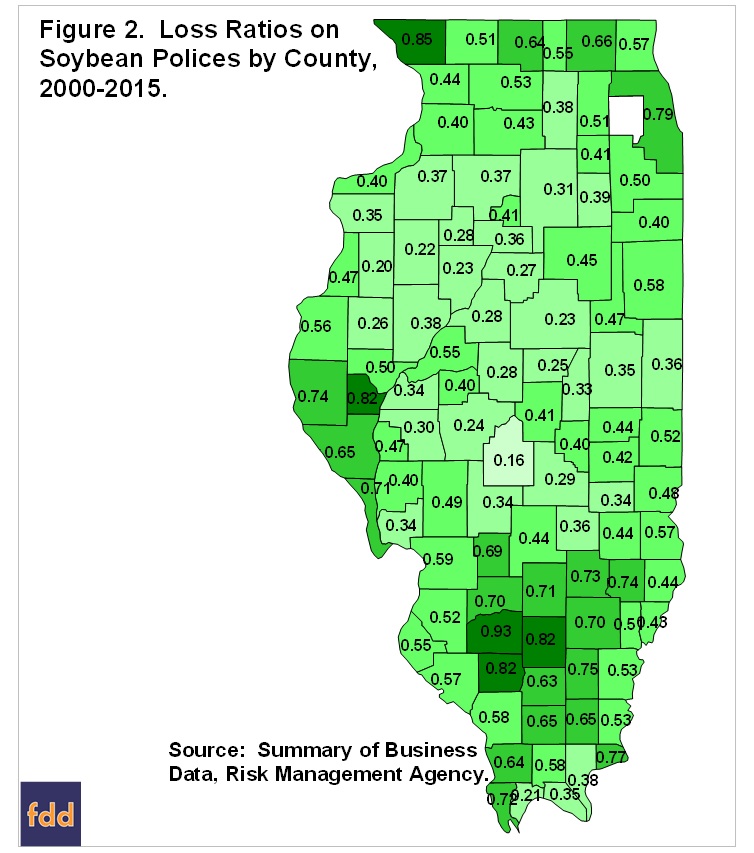 Some of the difference in performance across Illinois has to do with the impacts of the 2012 drought. The 2012 drought was centered in Missouri and southern Illinois, resulting in much higher loss ratios in southern Illinois. To illustrate, take the county with the highest average loss ratio from 2000-2016 and the county with the lowest loss ratio. Washington County had an average loss ratio of .93 from 2000-2016, the highest in the state (see Figure 2 and southwest Illinois). Washington County’s 2012 loss ratio for soybeans was 5.31. On the other hand, Christian County has an average loss ratio of .16 from 2000 to 2016, the lowest in Illinois (see Figure 2, approximately in the middle of the state). Christian County’s 2012 loss ratio was .16.

More detail on crop insurance performance by county is available in the 2018 Crop Insurance Decision Tool a Microsoft Excel spreadsheet available for download from farmdoc. Users can evaluate performance for counties by product and coverage levels. Figure 3 shows an illustration for all soybean products in Washington County, Illinois. 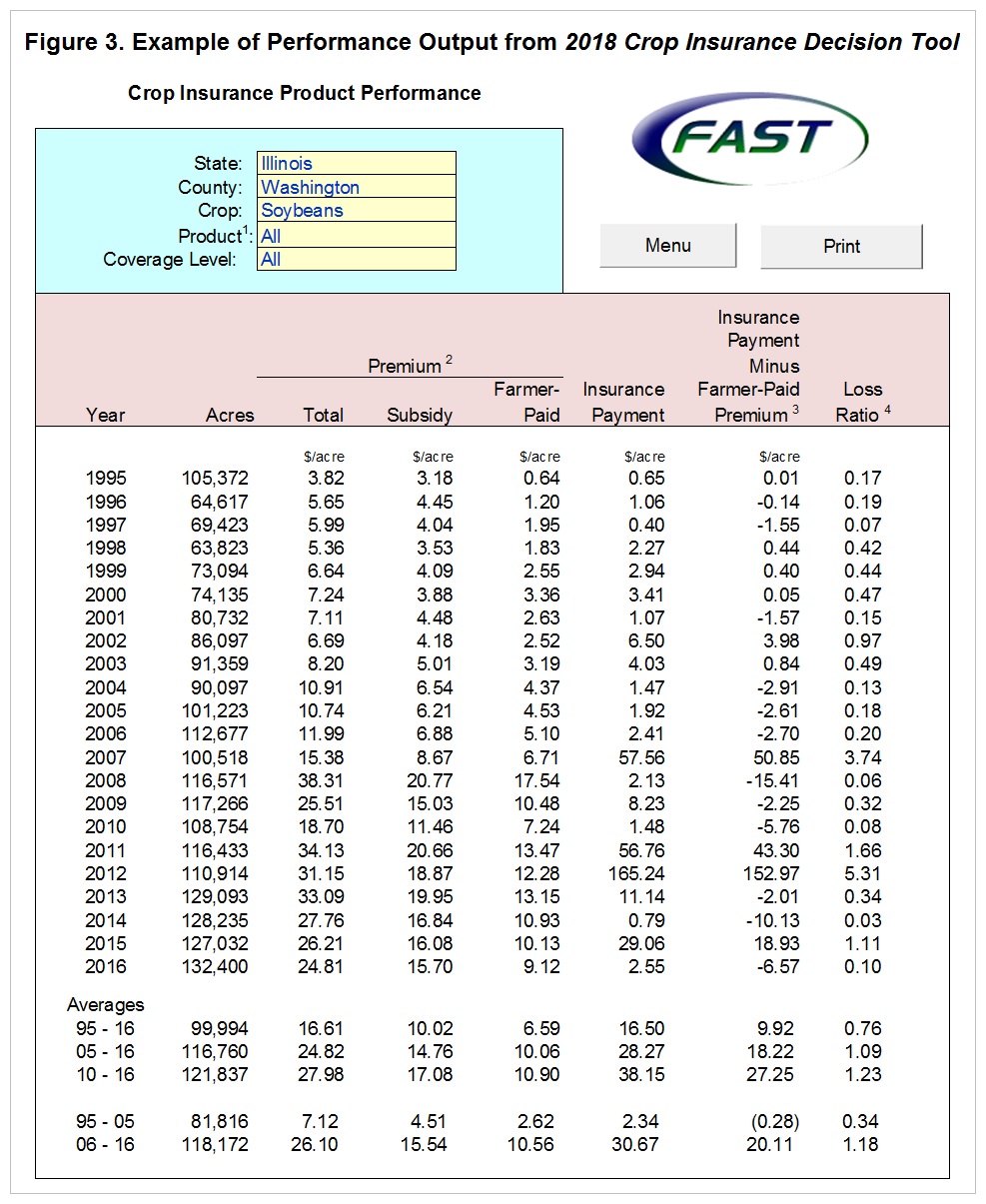 While payments have been low in recent years, particularly in northern and central Illinois, I suggest caution when considering lowering coverage levels or eliminating crop insurance on soybeans. Much of the recent low payments are associated with exceptional soybean yields. It is possible that something has happened in soybean genetics or soybean production leading to higher yields. A session was devoted to this topic at our recent Illinois Farm Economic Summit meetings. At that session, Scott Irwin concluded that “the biggest factor explaining high soybean yields in recent years is simply exceptionally good growing season weather” (farmdoc daily, December 29, 2017). This session did not explicitly address yield risk. However, if exceptional weather has caused high yields, a return to more adverse conditions could lead to low soybean yields.

Consequently, recent low loss experience on soybean crop insurance policies does not mean that low loss experience will persist. Low soybean yields are possible, perhaps through adverse weather conditions or some pest related problem. Low prices are possible. Heightened price risk may exist as trade policies come under scrutiny. In any case, there is a possibility of widespread yields or revenue losses.

Irwin, S. "IFES 2017: What Is Up with Soybean Yields?" farmdoc daily, Department of Agricultural and Consumer Economics, University of Illinois at Urbana-Champaign, December 29, 2017.