In a farmdoc daily article (February 15, 2018) last week, we showed how high D6 RINs prices can be directly traced to conventional ethanol mandates that exceed the E10 blend wall, creating a gap that has to be filled by biodiesel. When biodiesel takes on the role of the “marginal gallon” for filling the conventional ethanol mandate, this forces the price of a D6 ethanol RINs to equal the much higher price of a D4 biodiesel RINs. It was also demonstrated that a combination of the crash in crude oil prices and an improving economy increased the E10 blend wall and thereby reduced the conventional ethanol gap, to perhaps just a few hundred million gallons. This means it is possible that D6 RINs prices could fall back their pre-2013 level of just a few cents without making any changes to the RFS. The purpose of this article is estimate how much the total cost of a RINs bundle would drop if the conventional ethanol gap disappeared and the price of D6 RINs declined to just a few cents. The RINs bundle reflects the true weighted-average cost of the RINs that obligated parties under the RFS must turn in to the EPA to demonstrate compliance

To understand what is meant by the cost of a RINs “bundle” one has to understand how compliance with the RFS actually works. It does not work the way many people think it does. For example, the conventional ethanol mandate imposes an obligation on gallons of gasoline and also on gallons of diesel. Likewise, the biodiesel mandate imposes a mandate on gallons of both diesel and gasoline. In fact, every gallon of petroleum gasoline and diesel transportation fuel in the U.S. is subjected to exactly the same set of RFS mandate obligations.

In this example, obligated parties spend $0.0475 per gallon of gasoline and diesel to comply with the ethanol and biodiesel mandates. The cost of the RINs bundle is a function of both the fractional RINs obligation per gallon and the price of the two types of RINs.

With this background, we can begin the process of estimating the actual cost of a RINs bundle under the RFS. The starting point is found in Panel A of Table 1. The first four columns present the four fractional mandates specified in the annual EPA rulemakings for the RFS between 2010 and 2018–total, advanced, cellulosic, and biodiesel (biomass-based diesel). Fractional in this case simply refers to the percentage mandates divided by 100. The fractional mandate for the conventional ethanol mandate is implied from the difference between the total and the advanced mandates. In percentage terms, the total, advanced, cellulosic, biodiesel, and conventional mandates for 2018 are 10.67, 2.37, 0.159, 1.74, and 8.3 percent, respectively. 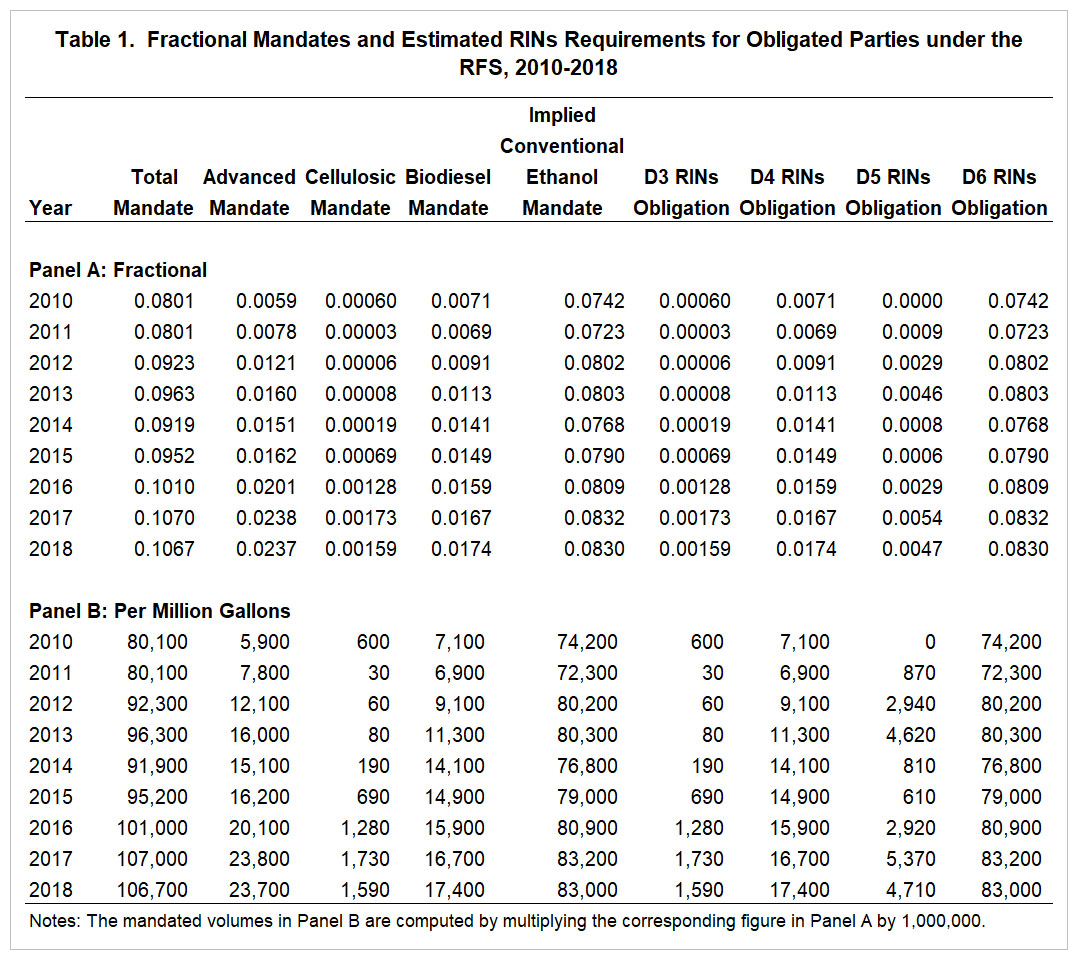 Due to the nesting provisions of the RFS, the fractional mandates are not exactly the same thing as RINs obligations. In the example above these were one and the same. The assumptions we use for the analysis are that:

These assumptions are used to compute the RINs obligations found in the last four columns of Panel A in Table 1. For example, this results in fractional obligations for 2018 of 0.00159, 0.0174, 0.0047, and 0.0830 for D3, D4, D5, and D6 RINs, respectively, for each gallon of gasoline and diesel produced in the U.S. One can also look down the columns to see the growth in a particular obligation over time. As one example, the D4 biodiesel RINs obligation increased from 0.0071 in 2010 to 0.0174 in 2018. The D6 obligation increased from 0.0742 to 0.0830 over the same time period. Panel B in Table 1 converts the fractional mandates and RINs obligations to volumes assuming gasoline and diesel production of one million gallons. This helps to highlight the dominance of the D6 ethanol RINs obligation in the total obligation and why the price of D6 RINs is the focus of so much attention in the political controversies surrounding the RFS.

The next step is to multiply the RINs obligations by RINs prices, like in the example above, to determine the weighted-average cost of a RINs bundle. The weekly RINs prices we will use in the calculations are shown in Figures 1 and 2. For each week, the RINs prices are multiplied by the RINs obligations shown in Table 1. Note that the RINs obligations only change once a year while the RINs prices can and do change weekly. The weighted average-cost of a RINs bundle from January 6, 2011 through February 15, 2018 is presented in Figure 3. The cost series starts in January 2011 because some of the RINs price data does not begin until around this time. It should be recognized that the cost of RINs bundles presented in Figure 3 are only estimates. The actual costs depend on the vintage of RINs actually used for compliance and the types of RINs used for compliance in higher nested categories (D4 for D6 compliance). Nonetheless, the estimates in Figure 1 should be a reasonable benchmark for the cost of RINs bundles over time. 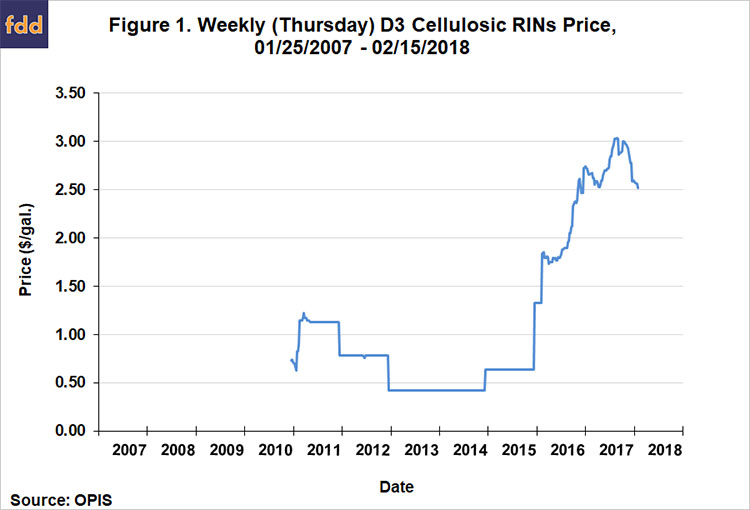 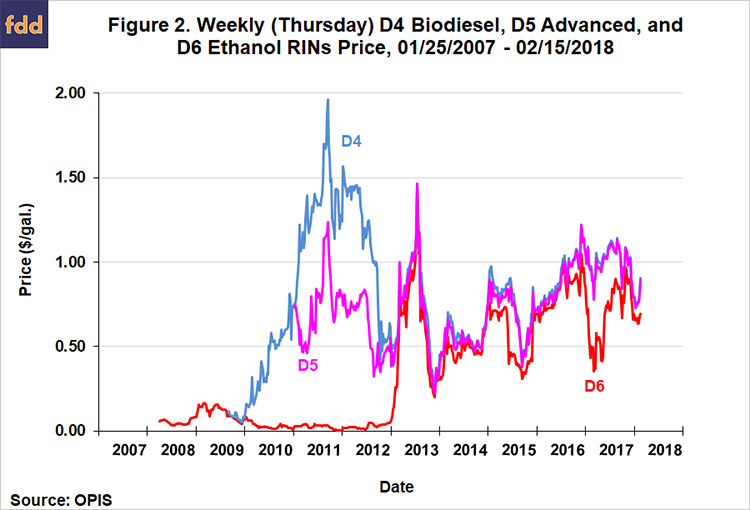 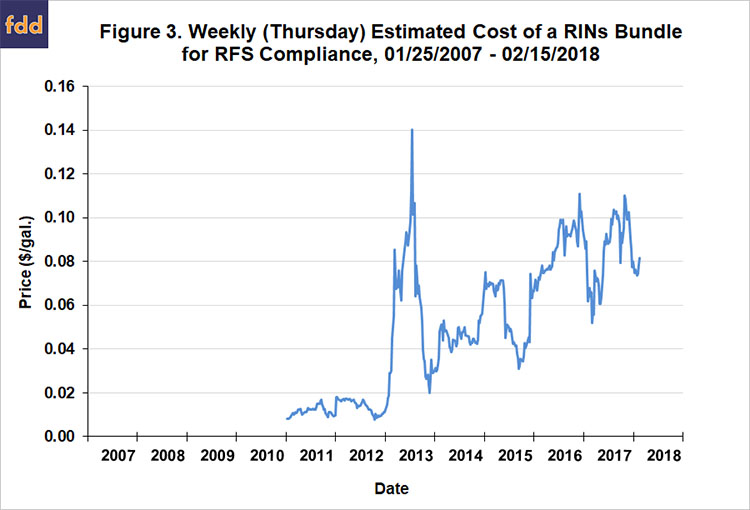 The order of the terms in the computation are D3, D4, D5 and D6. We now compute the cost of the RINs bundle assuming the D6 RINs price falls back to its pre-2013 average of 5 cents per gallon:

The drop in the cost of the RINs bundle would be over 5 cents per gallon, or about a two-thirds reduction. By any standard this would be a very large reduction in the cost of a RINs bundle. However, the projected cost of 3 cents per gallon would still be triple that of the pre-2013 level of around 1 cent per gallon. The reason is the increasing advanced mandate obligations for D3, D4, and D5 RINs. These RINs by definition must have a price that is equal to or greater than D6 RINs and their weight in the RINs bundle computation has increased over time.

Compliance for the RFS biofuels mandates does not work exactly the way most people think. The mandates for different types of biofuels apply to both gasoline and diesel production, which means that the true measure of RINs compliance cost is a weighted-average of fractional RINs obligations and the price of RINs. We estimate the cost of a RINs bundle on a weekly basis over January 2011 through February 2018. This is an estimate of the weighted-average cost of RINs obligations that must be applied to every gallon of gasoline and diesel produced in the U.S. (or imported). After spiking dramatically in 2013, the cost of a RINs bundle has steadily trended upward, with the cost bouncing between 8 cents and 11 cents per gallon the last couple of years. We next considered what might happen to the cost of a RINs bundle if the conventional ethanol gap disappears and the price of D6 RINs returns to the pre-2013 level of a few cents per gallon. The drop in the cost of the RINs bundle is estimated to be over 5 cents per gallon, or about a two-thirds reduction. However, the projected cost of 3 cents per gallon would still be triple that of the pre-2013 level of around 1 cent per gallon, due to increasing advanced mandate obligations for D3, D4, and D5 RINs. So, even if the conventional ethanol gap disappears and the price of D6 ethanol RINs returns to the low levels seen previous to 2013, the cost of a RINs bundle will not fall as much.

Irwin, S. "Fixing the RFS is Getting Easier and Easier." farmdoc daily (8):26, Department of Agricultural and Consumer Economics, University of Illinois at Urbana-Champaign, February 15, 2018.