There has been no shortage of ideas in recent months about how to “fix” the Renewable Fuel Standard (RFS). These include application of the various waiver authorities under the RFS, expanding the number of small refinery exemptions, and a $0.10 per gallon cap on the price of the RIN credits used to comply with the RFS (farmdoc daily, August 9, 2017; August 18, 2017; October 5, 2017; October 12, 2017; October 19, 2017; December 6, 2017; December 21, 2017). The reason cited over and over for the need to fix the RFS is the high cost of ethanol RINs borne by independent “merchant” refiners. In late January, Philadelphia Refining Solutions declared bankruptcy, citing high RIN costs as a major contributing factor. There is no argument that the cost of D6 ethanol RINs has indeed skyrocketed since 2012 (Figure 1). The disagreement is whether refiners have to absorb most of the RINs costs or are able to pass them on to fuel blenders in the form of higher gasoline and diesel blendstock prices. What seems to have gotten lost in all the noise surrounding the political war over the RFS is how rapidly the conditions are changing that created the high ethanol RINs prices in the first place. The key is the “gap” between the ethanol blend wall and the conventional ethanol mandate. In this article, we analyze why this gap is so important to understanding the movement of ethanol RINs prices, how the gap is rapidly shrinking, and what this means for the future level of ethanol RINs prices. 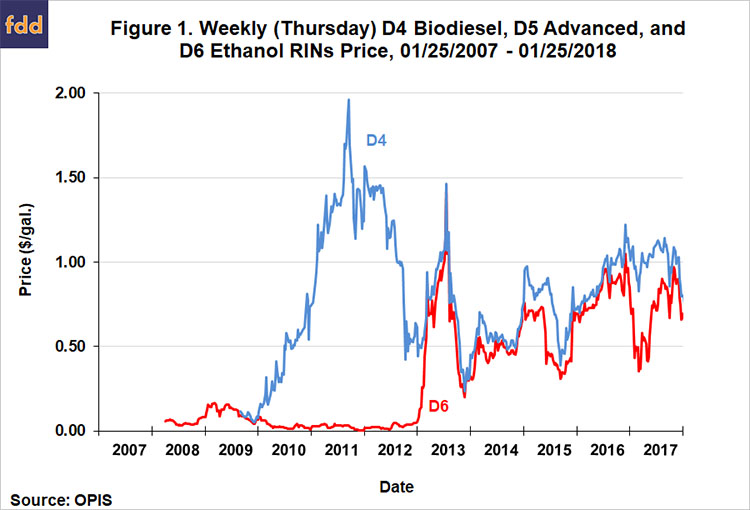 In order to understand the history of ethanol RINs prices we use a basic model of the ethanol market. Earlier versions of the model were used in several previous articles that analyze RINs pricing (e.g., farmdoc daily, July 19, 2013; September 23, 2015). The model of the ethanol market without an RFS volumetric mandate is presented in Figure 2. It represents the supply of ethanol producers and demand from gasoline blenders at the wholesale level on an annual basis. Retail demand at the consumer level is implicitly represented by a simple percentage markup of the wholesale demand shown in Figure 2. The first segment of the demand curve is assumed to be flat (perfectly elastic) up to the blend wall for ethanol prices equal to CBOB gasoline prices. We had previously assumed the breakeven ethanol price was 110 percent of the CBOB price based on Department of Energy research about the value of ethanol as an octane enhancer in gasoline blends. Our own research (farmdoc daily, March 5, 2017) shows that the octane benefit of ethanol in gasoline blends approximately offsets the energy penalty for ethanol, and hence, the new assumption of a breakeven price equal to the CBOB price. The second segment of the demand curve is vertical, reflecting the E10 “blend wall,” which is the physical limit of 10 percent ethanol blends in the gasoline supply. The third segment has a small amount of price sensitivity to reflect the demand for the higher ethanol blends, namely E15 and E85. This segment adds at most a few hundred million gallons to ethanol consumption because infrastructure constraints are assumed to restrict the ability to expand consumption of these higher ethanol blends. Note also that imports and exports of ethanol are ignored in the model for simplicity. This does not affect the main conclusions drawn from the model. 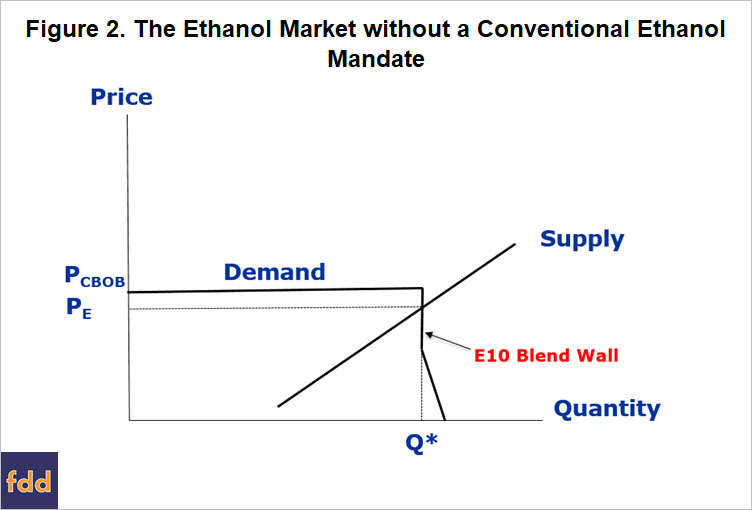 The ethanol market equilibrium shown in Figure 2 has two key features. First, the position of the supply curve results in ethanol consumption at the E10 blend wall but no consumption of higher ethanol blends. This resembles market reality in recent years. Second, the equilibrium ethanol price is below the price of CBOB gasoline, which means that adding ethanol up to 10 percent in gasoline blends ultimately lowers the cost of gasoline at the pump to consumers (assuming the lower cost of ethanol is fully passed on to consumers). Again, this appears to mirror market reality in recent years.

Figure 3 now adds to the model a non-binding conventional ethanol mandate. The mandate is “non-binding” because the mandated quantity, QCL, is lower than the market equilibrium quantity, Q*. The only change to the model is the creation of another perfectly inelastic (vertical) segment of the demand curve above the price of CBOB at the mandated quantity. Since the mandate is non-binding and does not affect the market price or quantity of ethanol, the price of D6 ethanol RINs credits for compliance with the RFS mandate is zero. The reason is that blenders are assumed to make a normal economic profit blending Q* gallons of ethanol and this more than meets the mandate quantity of ethanol under the RFS. Hence, D6 RIN credits have no economic value. This is essentially the market situation that existed before 2013. As shown in Figure 1, D6 RINs generally traded for only a few cents prior to 2013. 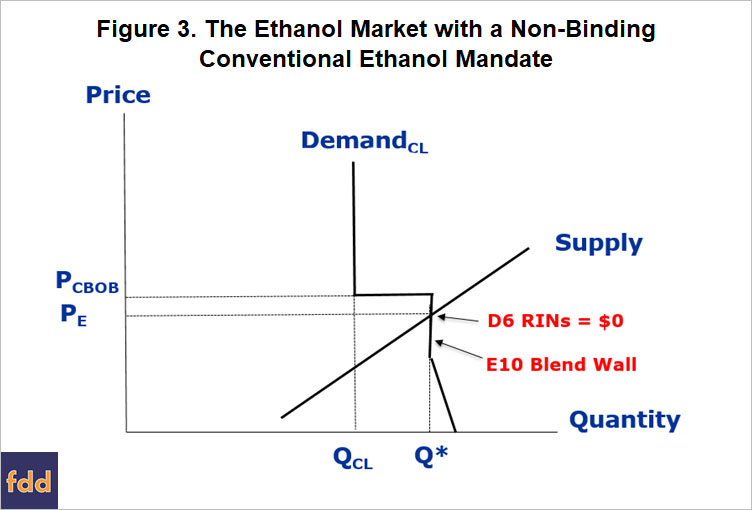 Figure 4 illustrates what happens when the conventional ethanol mandate QCH, is set higher than the market equilibrium quantity, Q*, and becomes binding. Intriguingly, the equilibrium price and quantity of ethanol are unchanged because ethanol consumption is stuck at the E10 blend wall given the assumed position of the ethanol supply curve. The conventional ethanol mandate must still be met even though it is physically impossible to do so with E10 consumption. This creates the “conventional gap” in Figure 4, which equals QCH – Q*. Something has to fill the conventional gap or obligated parties under the RFS would be out of compliance. The rules of the RFS anticipate this sort of situation and allow higher ranked RINs to be used to meet lower ordered mandates if necessary. As shown in Figure 4, the RINs required to fill the conventional gap would need to be non-ethanol and higher ranked. This perfectly describes D4 biomass-based diesel RINs (biodiesel RINs for short). 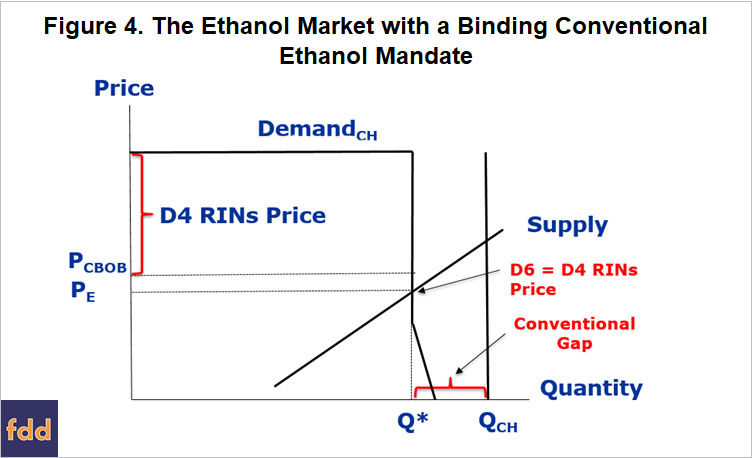 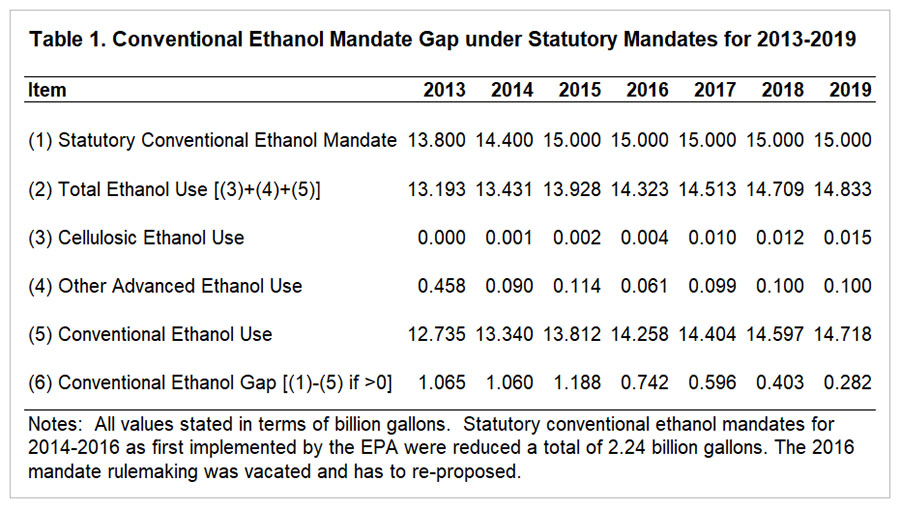 The bottom-line from this analysis is that the conventional ethanol gap is well on its way to being eliminated in the next few years, even without a large expansion in the use of higher ethanol blends such as E15 and E85. If this does occur, the impact on D6 ethanol RINs prices could be almost as profound as what we witnessed in 2013, but in exactly the opposite direction. It is not out of the realm of possibility for the price of D6 RINs to go back to their pre-2013 level of just a few cents. Of course, this assumes that the conditions that have been driving ethanol consumption upward do not change. Even if conditions do change, the size of the conventional gap is much more manageable than just a few years ago and opens the door for very modest increases in E15 and/or E85 to close the conventional gap. For example, a 300 million gallon conventional gap could be eliminated with an increase in E15 consumption of just 2 billion gallons, or about 1.3 percent of total gasoline consumption. Finally, gaps of this magnitude could also largely be met through 2022, when the RFS volumes reset, from the existing stock of RINs (farmdoc daily, February 8, 2018).

The political battle over the RFS has centered on the high price of ethanol RIN credits that are used to comply with the RFS conventional ethanol mandate. Independent “merchant” refiners claim that large RINs costs have materially harmed their profitability. We show in this article that high D6 RINs prices can be directly traced to conventional ethanol mandates that exceed the E10 blend wall, creating a gap that has to be filled by biodiesel. When biodiesel takes on the role of the “marginal gallon” for filling the conventional ethanol mandate, this forces the price of a D6 ethanol RINs to equal the much higher price of a D4 biodiesel RINs. This is essentially the story of the RFS and the resulting political battles since 2012. What has received little notice is how rapidly the conventional ethanol gap has shrunk since 2014 due to the combination of: (1) the crash in crude oil prices stimulating gasoline consumption, and (2) an improving economy. For example, the latest ethanol use estimate from the EIA for 2019 implies a conventional ethanol gap of a little less than 300 million gallons. This gap is so small that an increase in projected ethanol use for 2019 of just two percent would erase the gap completely. This means it is not out of the realm of possibility for D6 RINs prices to fall back their pre-2013 level of just a few cents without making any changes to the RFS. In this sense, “fixing” the RFS is getting easier and easier.

Coppess, J., and S. Irwin. "Another Wrinkle in the RFS: The Small Refinery Exemption." farmdoc daily (7):224, Department of Agricultural and Consumer Economics, University of Illinois at Urbana-Champaign, December 6, 2017.

Coppess, J., and S. Irwin. "The Biodiesel Waiver Provision in the RFS." farmdoc daily (7):192, Department of Agricultural and Consumer Economics, University of Illinois at Urbana-Champaign, October 19, 2017.

Irwin, S. and D. Good. "How to Think About Biodiesel RINs Prices under Different Policies." farmdoc daily (7):154, Department of Agricultural and Consumer Economics, University of Illinois at Urbana-Champaign, August 23, 2017.

Irwin, S., and D. Good. "On the Value of Ethanol in the Gasoline Blend." farmdoc daily (7):48, Department of Agricultural and Consumer Economics, University of Illinois at Urbana-Champaign, March 15, 2017.

Irwin, S., and J. Coppess. "Still Another Wrinkle in the RFS: A RINs Price Cap." farmdoc daily (7):233, Department of Agricultural and Consumer Economics, University of Illinois at Urbana-Champaign, December 21, 2017.

"Department of Energy Analyses in Support of the EPA Evaluation of Waivers of the Renewable Fuel Standard." Renewable Fuels Association. http://ethanolrfa.3cdn.net/1c8f40b533c12645b1_ubm6i6l9b.pdf