Concerns about agricultural trade continue to weigh heavily on farmers in Illinois and across the country as renegotiations over NAFTA finished up their sixth round in Montreal, Canada (Torry, Feb. 5, 2018). Despite some recent progress on telecom and digital trade, other recent developments have witnessed threats from the Canadian Prime Minister and the continued stumbling block of dairy trade (Bowden, Feb. 3, 2018; PBS News Hour, Feb. 3, 2018). Further complicating the trade discussion, two weeks ago Canada announced that it would join the ten remaining countries and sign a revised version of the Trans-Pacific Partnership (TPP). This newly revised version, now named the Comprehensive and Progressive Agreement for Trans-Pacific Partnership (CPTPP), will be signed in March by 11 of the original 12 TPP members (i.e., all original members except the U.S.). The CPTPP may provide both Canada and Mexico more leverage in the NAFTA negotiations because both will be part of a trade agreement that gives them better access to nine other markets.

We have previously discussed how and why trade is essential for U.S. agriculture, but with the revised TPP or CPTPP, moving forward and the end of scheduled NAFTA renegotiations drawing near, we want to take a deeper dive by looking at trade data specifically for Illinois. Both the CPTPP and NAFTA hold the potential for substantial impacts on Illinois industries. More to the point, Figure 1 illustrates that four of Illinois’ top six export destinations are covered by these two agreements: Canada, Mexico, Australia, and Japan. China and the EU make up the remaining two of the top six export destinations for Illinois. 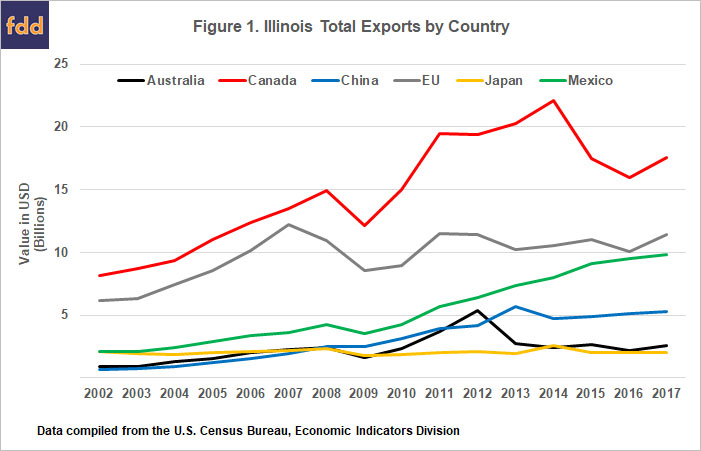 In 2017, Illinois exported nearly $65 billion worth of goods worldwide, making it the fifth largest exporting state, accounting for 4.2% of total U.S. export goods. Illinois exports are mainly comprised of non-agricultural products; however, over the last five years agriculture has averaged 11.5% of total exports and $7.5 billion annually ($7.46 billion in 2017). By comparison, the machinery industry exported $12.4 billion worth of goods in 2017, the electronics industry $9.23 billion, and the automotive industry was responsible for $6.58 billion ($1.6 billion coming from motor vehicles and $2.7 billion from motor vehicle parts). Two of the top 20 exported commodities have consistently been agricultural products: soybeans ($2.07 billion in 2017) and corn ($435 million in 2017). The full list of the top 25 exports can be viewed here.

Due to their proximity and existing trade agreements, both Canada and Mexico have long been Illinois’ top trade destinations. Over the last five years, Canada has averaged a 29% market share of Illinois exports, accounting for an average of $18.4 billion, whereas Mexico has averaged a 14% market share and $8.6 billion over the same time frame. No other country comes close to matching the combined trade numbers of these NAFTA partners. The only market that comes close–just above Mexico, but well below Canada–is the entirety of the EU, averaging 17% market share and $10.4 billion. China rounds out the top three of individual countries with an average share of 8% and $5 billion. Figure 2 illustrates the percentage of Illinois exports by destination. 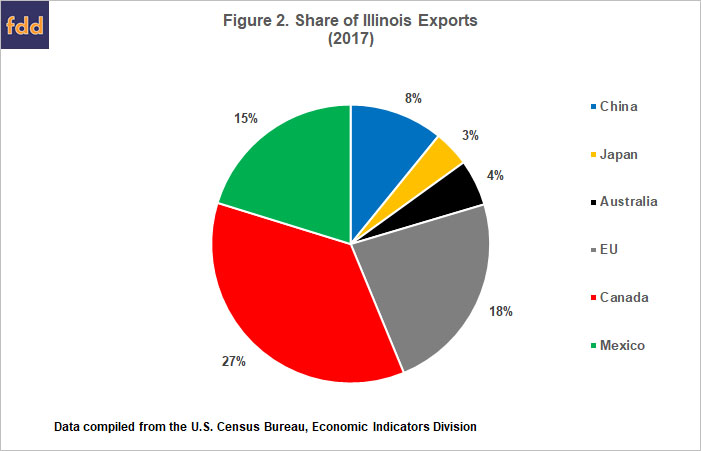 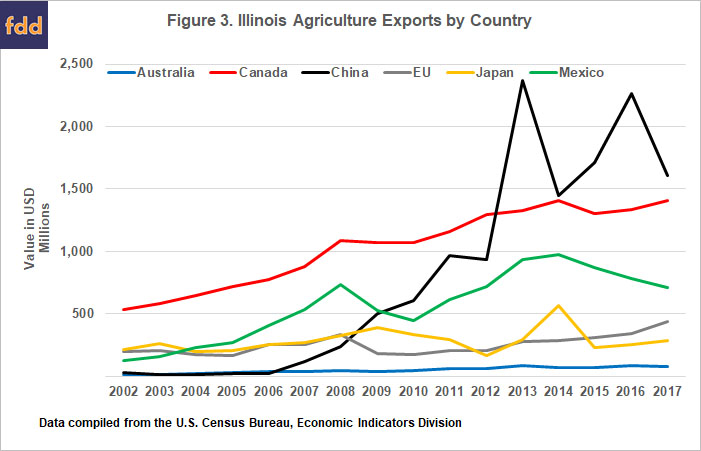 When it comes to Illinois exports, the NAFTA partners, Canada and Mexico, have combined to average 43% of Illinois’ export market over the last five years, an average of $27 billion per year. These export numbers serve as a sharp reminder of the importance of NAFTA to Illinois farmers. As the final round of scheduled negotiations begins in March, Illinois farmers will be watching closely but so will other trading partners around the world as they seek to adjust to the actions and positions of the United States.

Aiello, Chloe. "Massive Pacific Trade Deal -- Without America -- Gets the Go Ahead as Canada Agrees to Sign On." CNBC Politics. January 23, 2018. https://www.cnbc.com/2018/01/23/canada-agrees-to-sign-revised-tpp-and-hopes-to-persuade-trump-on-nafta.html

Bowden, John. "Trudeau Warns US that Canada 'Will Not Be Pushed Around' on NAFTA Negotiations." The Hill. February 3, 2018. http://thehill.com/policy/international/372147-trudeau-warns-us-that-canada-will-not-be-pushed-around-on-nafta