The Federal government subsidizes a portion of the total premium of Federal crop insurance policies and this premium support represents a large portion of total Federal outlays associated with crop insurance. An often-made proposal has been to limit Federal premium support on a per farm basis. A crop insurance subsidy limit has some precedence in that commodity title programs have had limits throughout history (see farmdoc daily, March 24, 2017). Except for peanuts, program crop payments under the 2014 Farm Bill are limited to $125,000 per individual (farmdoc daily, August 21, 2014). Limits generally arise from equity concerns about individuals receiving too large benefits from the government. An often-discussed limit on crop insurance subsidies is $40,000 per farm. Once a farm reaches the $40,000 limit, all remaining premium would be paid entirely by the farmer. The remainder of this article shows farm sizes at which the $40,000 limit is reached.

Table 1 reports farmer-paid, Federally-paid, and total premiums associated with a Revenue Protection (RP) policy for corn sold in McLean County, Illinois. McLean is a county in central Illinois that would generally be viewed as having low risk. These premiums are calculated using 2018 rates, a $3.96 projected price and a .19 volatility. The $3.96 projected price and .19 volatility are 2017 values. The values for 2018 will be known at the end of February. Premiums in Table 1 are for a 100 acre enterprise unit given a trend adjusted yield of 190 bushels per acre. RP is by far the most popular product sold for corn. In 2017, 95.2 percent of the acres in McLean County were insured using RP (Summary of Business data from the Risk Management Agency). Additionally, the most popular coverage level is 85%, which was used to insure 62.5% of the corn acres in McLean County. 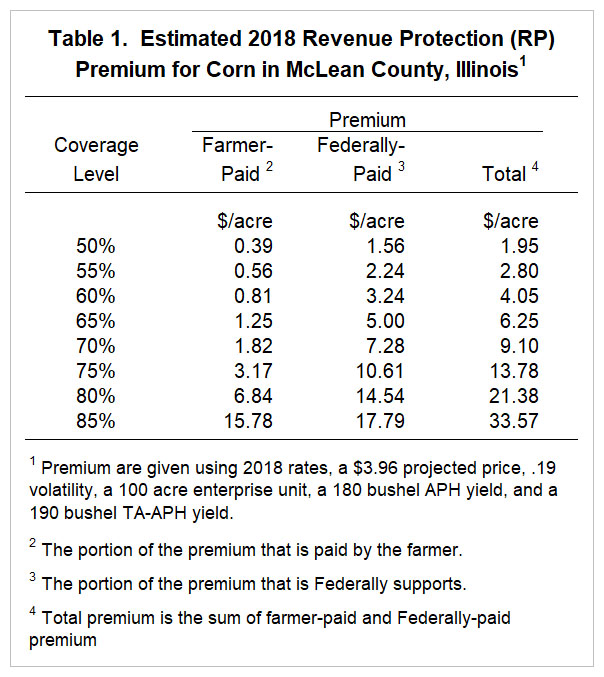 The total premium for the 85% coverage level RP policy is $33.57 per acre. This total premium is set by the Risk Management Agency (RMA). RMA sets premiums so that expected payments (indemnities) over time from a policy will approximately equal total premium. In other words, the expected payment for the 85% coverage level is $33.57 per acre. In central Illinois, these payments will not occur every year. Rather, most years will have no payments or small payments. There will be a number of years with larger payments. Very occasionally, there will be a drought year like 2012 when large insurance payments will occur. Over that variety of possible years, RMA estimates that the total payment for these policies will be $33.57 per acre.

McLean County, Illinois would generally be viewed as a relatively low production risk area. The $40,000 limit will be reached at a much lower acreage level in a higher risk area because per acre premiums are higher in these higher risk areas. To illustrate, corn premiums are also shown for Saline County, Illinois for a farm with a trend adjusted yield of 152 bushels per acre (see Table 2). Saline County is located in southern Illinois and is a riskier region than central Illinois.

Most farmer grow and insure both corn and soybeans. Soybean crops typically have lower risk than corn, resulting in lower premiums for soybeans. Those lower premiums will then impact acres required to hit the $40,000 limit. Table 3 shows Federally-paid premium for a blended acre of 50% corn and 50% soybeans, a fairly common crop rotation in Illinois. Corn premiums are those provided in Tables 1 and 2. Soybean premiums are shown in the Appendix Tables 1 and 2. 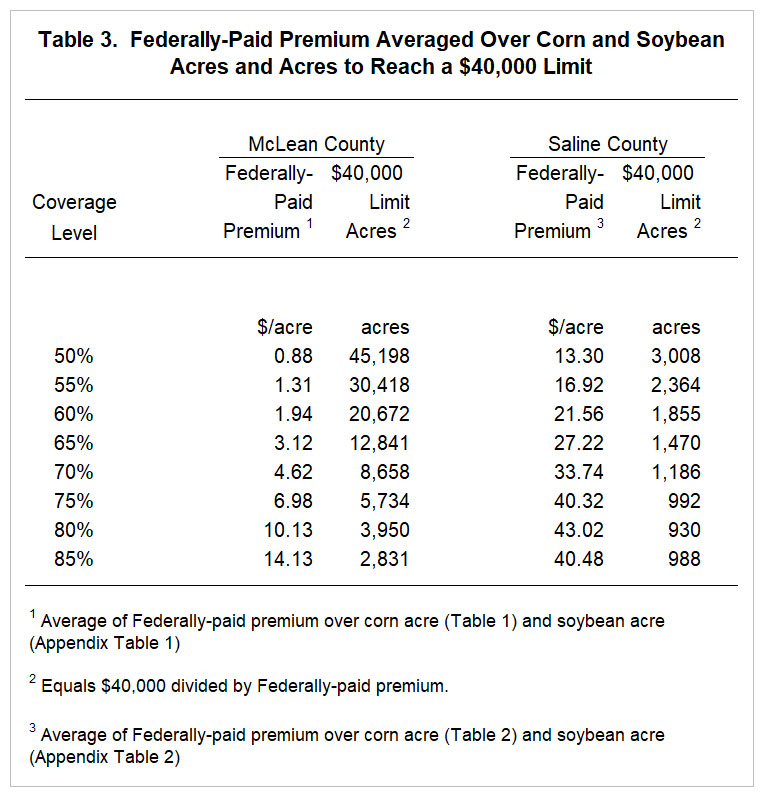 For the McLean County case, the most popular coverage option is 85%, and the $40,000 limit is reached at 2,813 acres. By way of comparison, average farm size in Illinois is 359 acres. The 359 acres include many farms that are small and receive a majority of their income from off-farm sources. The average grain farm size enrolled in Illinois Farm Business Farm Management is about 1,300 acres, representing a size that is closer to receiving more of their income from on-farm sources. There are many farms over 1,300 acres and a 2,813 acre would not be viewed as a particularly large farm.

For Saline County, the most popular coverage level is 75% and the $40,000 limit is reached at 992 acres. The 992 acres is below the average size for commercial grain farms in Illinois.

The above comparisons are based on farmers having a 100% share in the farmland. Under share rent situations, farmers would receive a portion of the crop and only insure a portion of the acreage. For example, a 50-50 share-rent arrangement would result in a 50% share in the crop. In this case, premiums costs (and resulting payments) to the farmer would be cut in half. If all farmland was 50-50 share rented, the values in table 3 would double. However, all farmland is not share rented on most farms. According to Illinois Farm Business Farm Management summaries, 46% of the farmland was share-rented in central Illinois and 37% was share rented in southern Illinois. Even after these considerations, farm sizes reaching those limits would not represent extremely large farms. Moreover, the proportion of land controlled under cash rent agreements tends to be greater on larger farms in IL, and there will be farms that have no share rented acres. Thus, the acreage limits listed in those tables would impact some farms.

Several observations from the above analysis: 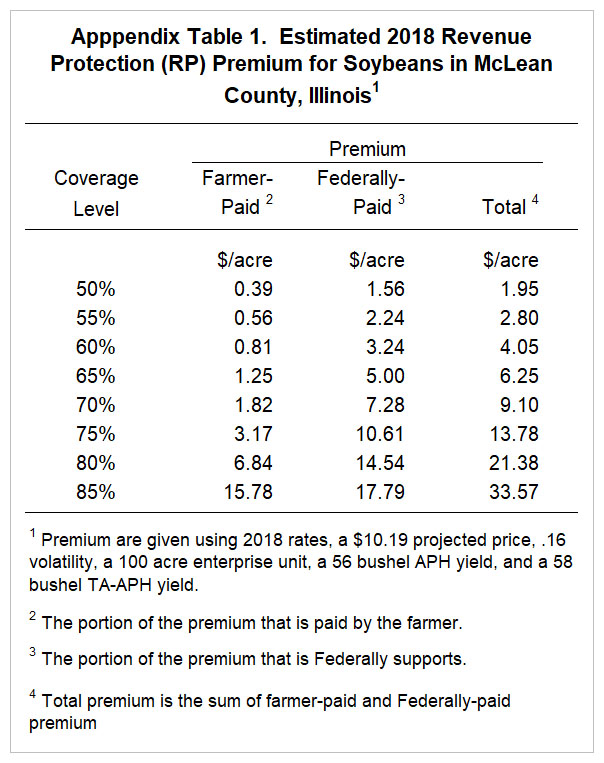 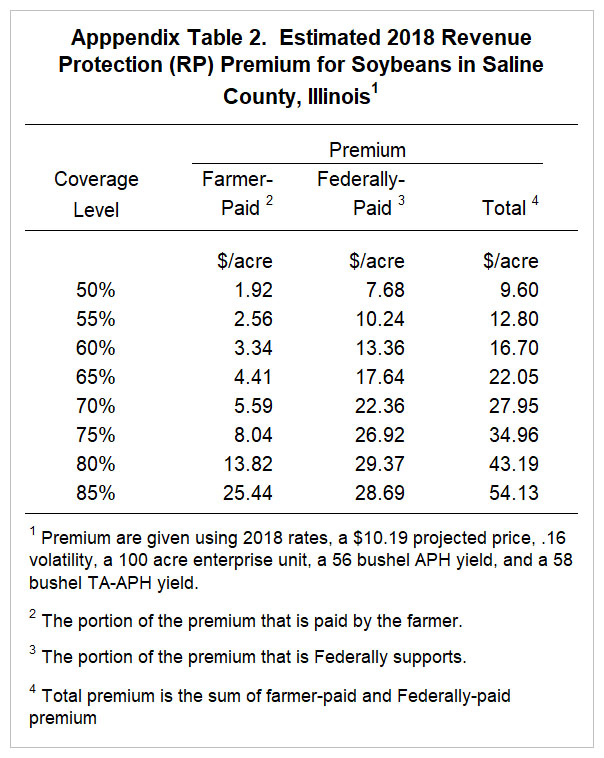