The economic state of U.S. crop farming has drawn considerable attention in recent years. This article uses U.S. Department of Agriculture (USDA) cost of production data to compare the ratio of gross revenue per acre from the market to total cost of production per acre for 9 crops over 3 recent periods: 2003-2006, 2008-2013, and 2015-2016. Also compared are farm safety net payments. The 3 periods are distinct price and income periods. Prices and income were lower in 2003-2006 than in the 2008-2013 farm prosperity period of higher prices and incomes. The 2015-2016 period is associated with lower crop prices and incomes. Both 2007 and 2014 are treated as transition years. Data note 1 contains further discussion of the cost of production data and time periods. Data note 2 contains further discussion of the farm safety net payment data. 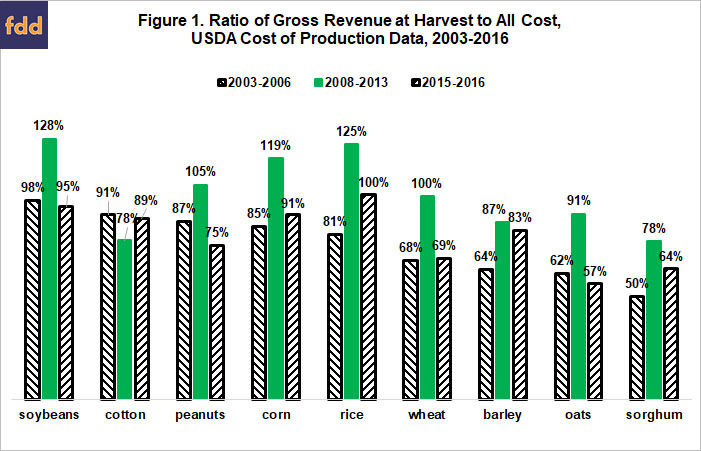 Despite the widely noted large decline in crop prices since 2012, ratio of gross revenue/acre from the market to total cost of production/acre is fairly similar by crop before and after the period of farm prosperity (see Figure 1). The ratio is higher in 2015-2016 than 2003-2006 for 4 crops (corn, rice, barley, sorghum), lower for 3 crops (soybeans, peanuts, oats), and nearly identical for 2 crops (cotton, wheat).

All ratios during 2003-2006 and 2015-2016 are less than 100% except for rice in 2015-2016. A common finding throughout the long history of studying returns to farming is that farms as a group generally do not cover all costs on an annual basis, except occasionally and during relatively short periods of prosperity. Various reasons have been offered to explain this apparently economically irrational finding. Farmers love to farm and thus may willingly accept lower returns, especially for the opportunity cost of their and their family’s labor and management. Farmers may also trade off lower immediate flow returns for the appreciation in land values that have occurred over time. This argument is reflected in the phrase, “farmers are cash poor, but land rich.” Most studies find that over the long term, returns on farm assets are competitive with returns on other assets after adjusting for risk. An implication is that on owned land farmers are better off than cost of production accounting suggest.

As an additional point of historical perspective for this assessment, the ratio of gross revenue/acre to total cost/acre averaged 13 percentage points higher in 2003-2006 than in the 4 prior years (1999-2002) for corn, cotton, peanuts, sorghum, soybeans, and wheat. The same cost-of-production methodology has been used for these 6 crops since at least 1999 (see data note 1).

Combined farm safety net payments per year are smallest in 2015-2016. Their smaller role in 2015-2016 than 2003-2006 is even more pronounced when expressed relative to total cost of production (see Figure 2 and Data Note 2). High yields led to smaller net insurance payments in 2015-2016 but to higher commodity program payments. It is thus unclear if a return to more normal yields will change the finding that farm safety net payments are lower after than before the period of farm prosperity, especially when expressed relative to crop expenses. 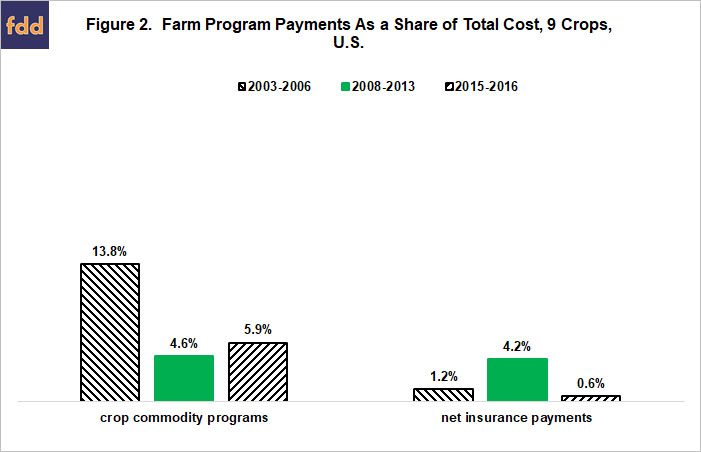 Data Note 1: USDA, Economic Research Service has compiled cost of production data for barley, corn, cotton, oats, peanuts, rice, sorghum, soybeans, and wheat since 1975. The last available year is 2016. Total cost equals operating cost (seed, fertilizer, chemicals, etc.) plus allocated overhead (hired labor, unpaid labor opportunity cost, capital recovery cost, land rent, etc.). Gross revenue is the market value of primary and secondary products at harvest; it does not include commodity program or net insurance payments. Major changes in methodology were phased in starting with 1995 peanuts and sorghum and ending with 2005 oats. They included a decision to value the opportunity cost of land as a composite of cash and share rent. Given the changes in methodology, this analysis began with 2003, the year the new methods were implemented for the next to last crop, barley. All crops except oats have 4 years of data prior to the period of farm prosperity. At harvest in 2007, it was unclear if a new price range was emerging or if the post-1974 price range would hold. Harvest price in 2007 was within the historic range for some crops but higher than this range for other crops. Thus, 2007 was treated as a transition year. Also treated as a transition year was 2014; this time because the decline in price varied across crops.