The recent release of the Prospective Planting report and the threat of a 25% tariff on U.S. soybean imports to China has resulted in swings in corn and soybean futures prices. Recent prices have not switched relative profitability between corn and soybeans. Soybeans are projected more profitable than corn, but the difference between the profitability of the crops have narrowed. Risks of significant price declines have increased, particularly for soybeans. Hedging a large percentage of 2018 expected soybean production seems prudent.

On April 4th, the Chinese government announced its intention to place a 25% tariff on the value of soybeans imported from the United States. The enactment of a 25% soybean tariff would have a significant, negative impact on U.S. soybean prices. However, the enactment of tariffs is not a foregone conclusion, and negotiations between the U.S. and Chinese governments likely will continue over the next several months. Still, the prospect of the tariff caused soybean futures prices to move sharply lower. The settlement price of the November 2018 CME soybean contract was $10.19 per bushel, $.23 bushels less than April 3rd close of $10.42.

CME soybean futures prices rebounded through the remainder of the week. The settlement price of the November 2018 contract was $10.33 on Friday, April 6th. The $10.33 price was above the $10.16 price before the release of the 2018 Prospective Planting report. Still, there appears to be much more downside risk now in the soybean market, as illustrated by an increase in the soybean volatility index. Soybean volatilities have been above .20 in recent days, well above the .14 to .16 level experience through much of late February and early March. The higher volatility indicates that traders of soybean options contracts believe there is more price variability in the market now than during the winter. 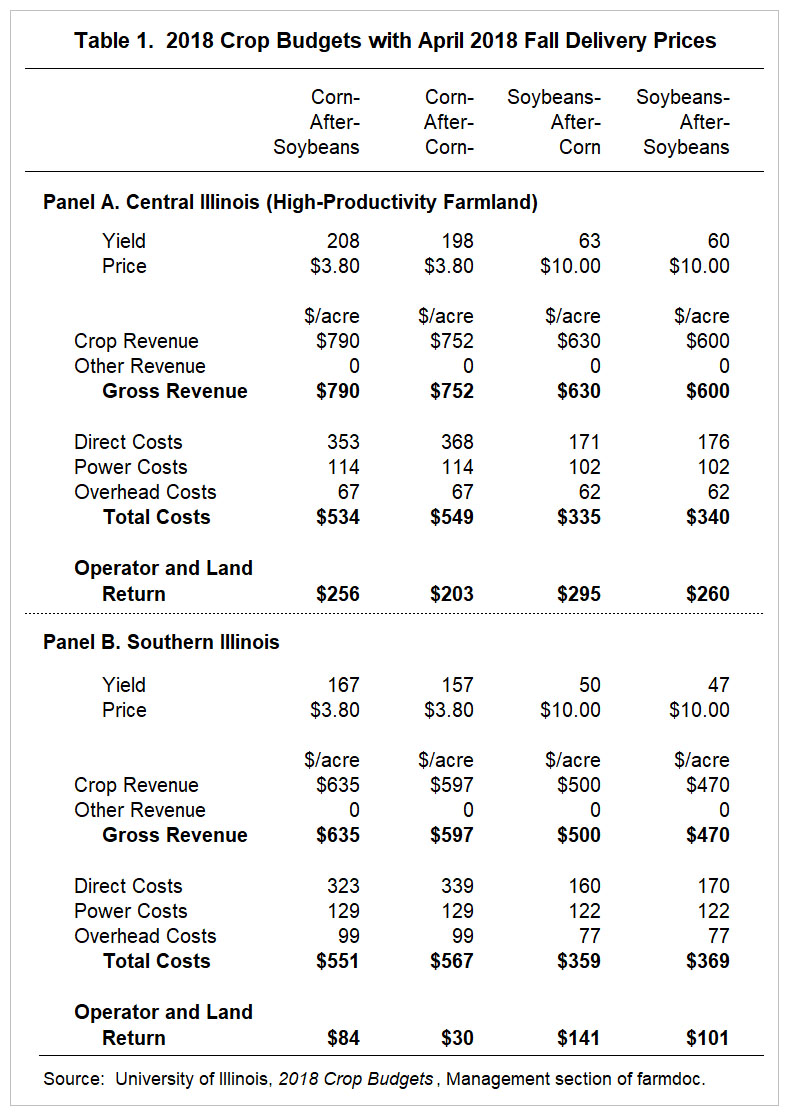 Price changes have increased corn profitability relative to soybean profitability, but have not suggested shifts in acres. Overall, price changes suggest a slightly more profitability 2018 than earlier in the winter. Still, there are concerns about overall price levels and much can change between now and harvest.

If anything, downside risks are larger now than prior to the threat of tariffs, particularly for soybeans. Higher risks suggest that forward pricing more of 2018 expected soybean production will be a prudent risk management strategy, particularly given that most farmers should be profitable at soybean prices above $10.00 per bushel given that yields are near or above trend levels. Pricing more production introduces the possibility of hedging losses if prices increase. If farmers have purchased an insurance product with a guarantee increase such as Revenue Protection (RP), offsetting payments will be received in cases when prices rise and yields are below guarantee levels.

Farmers who purchased revenue crop insurance policies will have downside price production. Given the $10.21 project price and yields at guarantee levels, the harvest price must fall below the following levels for different coverage levels to trigger payments on revenue policies (e.g., Revenue Protection (RP) and RP with harvest price exclusion):

While these revenue products will offer downside risk protection, most farmers will face loss situations if prices fall enough to trigger insurance payments.

Low prices could also result in commodity title payments under Agricultural Risk Coverage (ARC) and Price Loss Coverage (PLC). ARC is a revenue program that makes payments based on county yields and market year average prices. Given yields near guarantee levels, ARC at the county level would begin to make payments around $8.70 per bushel for the 2018 production year. PLC has a reference price of $8.40. As a result, PLC will not make payments until MYA prices fall below $8.40 per bushel. The 2018 payments under ARC and PLC would both be made in the fall of 2019, a considerable distance into the future.

Both crop insurance and ARC/PLC offer downside price protection if prices fall dramatically as the result of some event such as enactment of soybean tariff. Still, hedging a high percentage of production seems prudent, particularly given that a late planting season appears more likely now. The current cold and wet conditions could lead to later planting, and perhaps shifts to soybean acres. This switch could lead to further downward price pressures.

Recent market events have not fundamentally impacted acreage decisions. Soybeans still appear more profitable than corn but the relative profitability of corn has increased. Downside risks associated with soybean production appear to have increased, suggesting that hedging more of 2018 soybean production may be prudent. Hedging more production does carry risks, and will result in losses if prices increase. Those farmers with Revenue Protection (RP) have protection built into the policy for increasing prices and low yield situations.