China and the threat of a possible U.S. trade war with the nation have dominated global headlines in recent months. Concerns are that if the world’s two largest economies come to blows, there will be a ripple effect that is felt across the entire world economy. This most recent increase in the dispute with China isn’t something new, as the U.S. and China have had long-standing issues with each other when it comes to trade and trade practices. However, the last several months have seen matters ramp up to a potential trade war, with hundreds of billions of dollars in tariffs being proposed.

So, how did we get to this point? In January the U.S. imposed import tariffs on washing machines and solar cells; in response China started a one-year anti-subsidy investigation into U.S. sorghum imports. In early March, President Trump signed off on tariffs for imported steel and aluminum, on April 2nd, China proposed to levy $3 billion in tariffs on U.S. imports–including fresh fruits, wine, and pork. April 3rd, the U.S. released a list of $50 billion worth of tariffs on Chinese goods in response to alleged intellectual property theft. On April 4th, China published a list of 106 products which they say will receive a 25% import tariff–mainly automotive products and agriculture (corn, soy, sorghum). A full timeline of events can be found here. Then most recently, on Tuesday, April 17, China announced a prohibitive 179% tariff on U.S. sorghum imports that will take effect Wednesday, April 18th.

In our February 2018 article, we wrote about China’s importance to Illinois agriculture–Illinois’ largest agricultural export market since 2013. Now we want to look at the specific commodities being targeted by China that come out of Illinois, and the potential impact those tariffs could have. One important note, however, is except for the 179% sorghum tariff, the other items facing a 25% rate have not taken effect yet, nor is there an immediate timetable for their implementation.

Two of the potential tariff targets that most effect Illinois are soybeans and sorghum. Over the last five-years, nearly 59% of all Illinois soybean exports have gone to China, an average of $1.18 billion per year. Last year, that amounted to $1.3 billion or 60% of total Illinois soybean exports going to China last year. The 179% sorghum tariff is targeted at the top-five sorghum producing states (Kansas, Texas, Colorado, Oklahoma, and South Dakota); as we pointed out in October 2017, retaliatory tariffs are often aimed at politically sensitive areas and states. Despite not being one of the top 10 producing states, Illinois sorghum has seen a five-year average of $74 million or 93% of total Illinois sorghum exports going to China, with $133 million or 99.7% of total Illinois exports just in the last year.

Corn and pork tariffs, on the other hand, should have less of an impact on Illinois producers. Over the last five-years Illinois has an average export value of $22 million or 3% of total Illinois corn exports. However, Illinois corn exports to China have been trending downward over the same period, with only $8 million going overseas last year. And when it comes to pork, last year was the first time in five years that Illinois exported live swine to China, $1.76 million or 51% of total Illinois live swine exports (US Census State Trade Data). The last two years have seen major declines in total Illinois pork exports (live, fresh, chilled or frozen) to China–with roughly only $4 million in 2016 and 2017. This comes after a six-year major growth period with $600,000 being exported in 2010 to a ten-year high of $53 million in 2015. The last two years of pork exports has represented a 1.2% share of all Illinois pork exports, compared to 7% over the growth period.

What does the proposed 25% tariff mean for commodity prices? As noted in yesterday’s farmdoc daily article, we would expect to see soybean prices drop 85 cents to $8.85, and corn to fall 5 cents to $3.65 (Swanson, Schnitkey, Tubbs, Coppess, & Paulson, 2018). Sorghum is being specifically targeted because the U.S. is the primary exporter to China with a value of $837 million last year, and an average annual value of $1.1 billion over the previous five years. The second largest exporter of sorghum, and only real competitor to the U.S. is Australia, with an average annual value of $213 million over the five-year period from 2012-2016 (the most recent year of available Chinese data). So, the 179% prohibitive tariff should do its job, and all but price the U.S. out of the Chinese sorghum market.

One of the big risks of the tariffs is not just its direct effects, but its potentially longer run effects at facilitating growth in our competitor’s market share. By hampering our agricultural exports, these tariffs give a competitive advantage to exporters from other countries, and those effects can facilitate export growth for years. While the concern with China and intellectual property is a long-standing issue in Chinese-US trade, bilateral trade threats may not be the most effective method through which this issue can be addressed. Meanwhile, our agricultural exports are on the front lines, with potential long-lasting consequences. 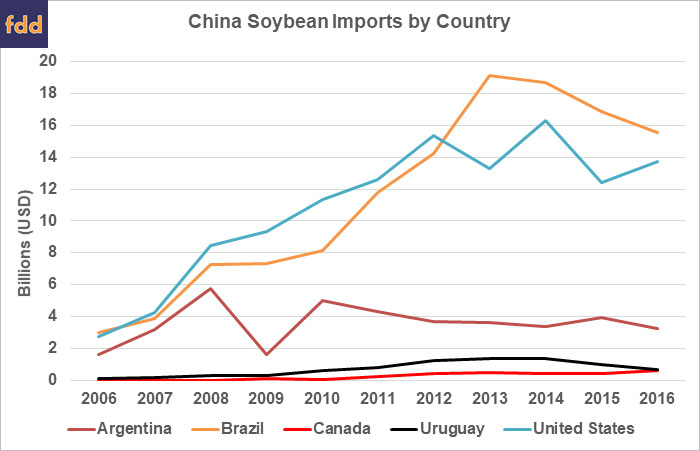 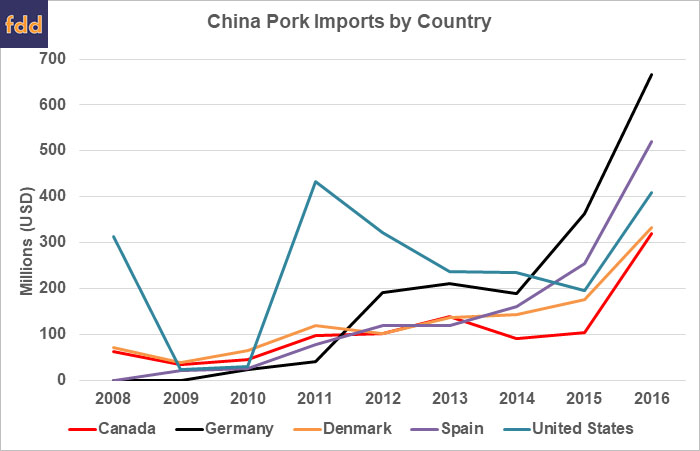 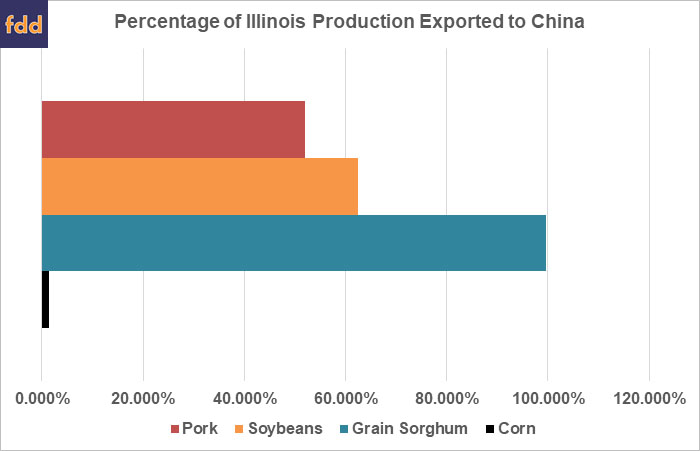 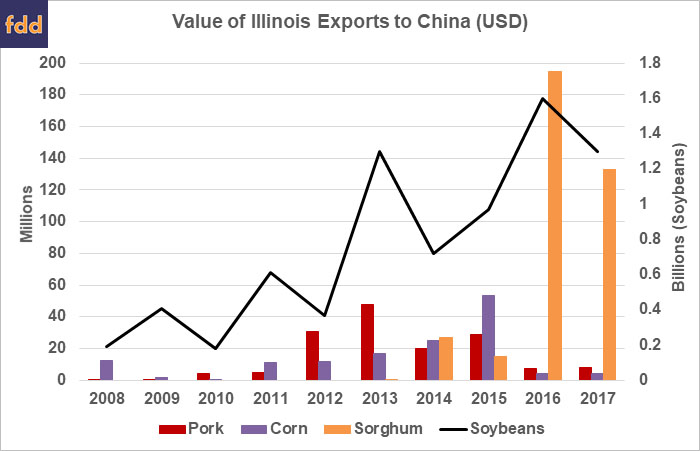 Country-level Exports are from World Integrated Trade Statistics at the World Bank https://wits.worldbank.org/

Crabtree, Justina. "The Full List of US Products That China is Planning to Hit With Tariffs." CNBC Asia-Pacific News. Published on April 4, 2018 and updated April 5, 2018. https://www.cnbc.com/2018/04/04/the-full-list-of-us-products-that-china-is-planning-to-hit-with-tariffs.html