In recent months, nitrogen fertilizer prices have increased, reaching roughly the same levels as in 2017. To achieve lower nitrogen fertilizer costs in 2018 than in 2017, many farmers will need to lower rates, particularly those who apply most of their nitrogen in the spring. Farmers who apply nitrogen above agronomically recommended levels may consider reducing rates as a means of cutting costs while at the same time increasing returns from corn production. 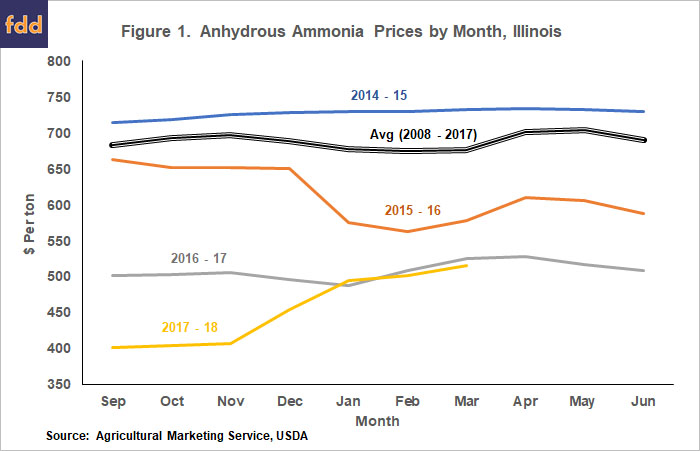 Guides for nitrogen rates are provided in the Corn Nitrogen Rate Calculator, a website maintained by universities in Corn Belt states. “Maximum Return to Nitrogen (MRTN) rates suggested for northern, central, and southern Illinois from this calculator are shown in Table 1. These rates are actual nitrogen and would have to be adjusted for the fertilizer applied (e.g., a pound of anhydrous ammonia has .82 pounds of nitrogen). The MRTNs were derived using a $3.80 per bushel corn price and a $525 per ton anhydrous ammonia price. Rates in this calculator are relatively insensitive to price changes. For example, increasing the corn price from $3.80 per bushel to $4.50 per bushel only increases the MRTN for corn-after-soybeans in central Illinois by 6 pounds from the 181 pounds shown in Table 1 to 187 pounds per acre. As a result of this price insensitivity, the MRTNs in Table 1 are applicable to most price expectations that farmers could have in the spring of 2018. 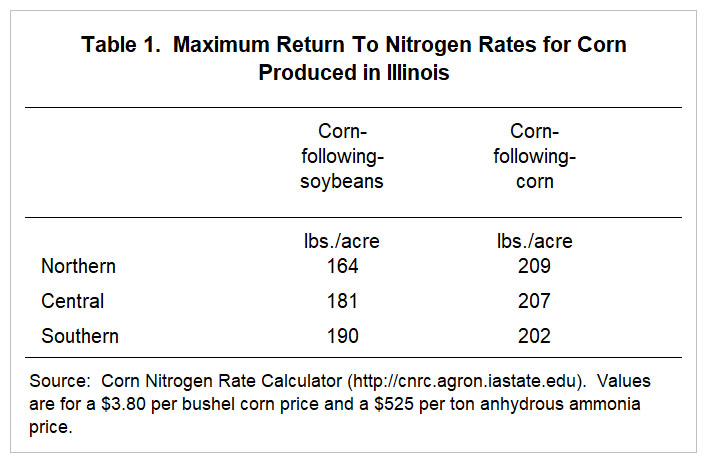 Some farmers may be applying above these MRTN amounts. Above MRTN applications may be based on a motive of having nitrogen there in years in which field conditions are suitable for higher yields. When developing the MRTNs, the methodologies specifically include many cases, with a number of cases resulting in higher corn yields at higher rates (see Nafziger, E., Using the N Rate Calculator). Accurately predicting when those situations of higher yields will result from higher rates before the fact is not possible at this point in time. The MRTN rate maximizes returns from corn production over the yield/rate cases contained in the MRTN calculator.

Nitrogen fertilizer costs have increased since the fall of 2017, with March 2018 prices near levels in 2017. Farmers who apply most of their nitrogen in spring likely will not have lower 2018 nitrogen fertilizer costs less than 2017 costs if they apply roughly the same rates in 2017 as in 2018. Farmers applying above MRTNs may consider reducing rates as a means or reducing costs while at the same time increasing expected returns from corn production.