This article uses 2017 data from Illinois Farm Business Farm Management to highlight selected differences between the highest profit grain farms (high one-third) and lower profitability grain farms (low one-third).  Farms are grouped by region in the state – north, central and south.  The central area is further divided into a group with higher productivity soils and one with lower productivity soils.  All farms were at least 500 acres in size. 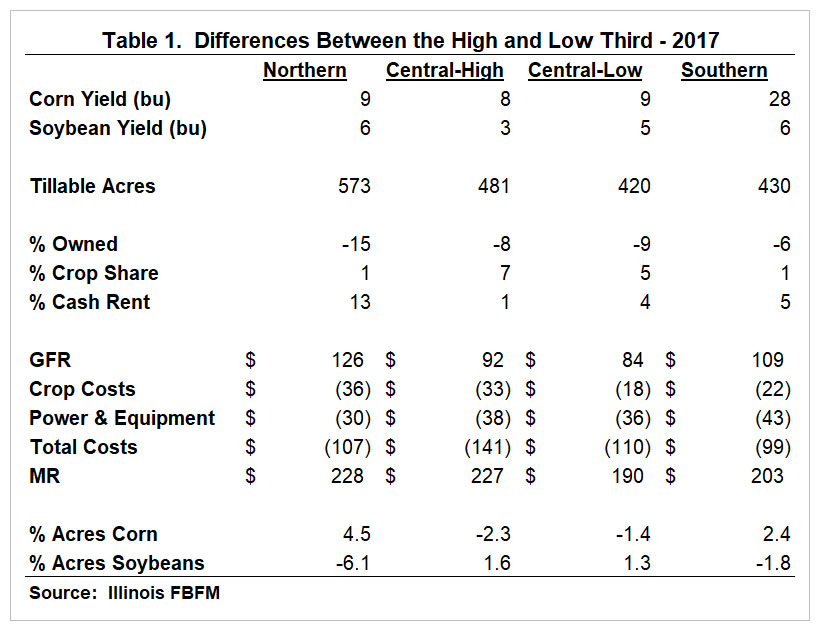 Farm size appears to be a contributing factor in higher profitability.  The four sorts all report over a 400 tillable acre larger farm size on average for the high one-third profit farms.

There are many factors contributing to the economic success of a farm operation.  There is not one single thing that higher profit farm operators do that mark their success – there are many things that they do that influence their farm operations financial success.

The authors acknowledge the data used in this article are from the larger dataset maintained by the Illinois Farm Business Farm Management Association.  Without the cooperation of the members and staff of Illinois FBFM, information as comprehensive and accurate as this would not be available for educational purposes.  Illinois FBFM maintains a roster of approximately 5,700 members who are served by 69 professional field staff.  Illinois FBFM is an not-for-profit entity with membership available to all farm operators in Illinois.  Illinois FBFM field staff provide counsel and guidance in the areas of recordkeeping, farm financial management, business entity planning and income tax management.  For more information, please contact the Illinois FBFM office located in Mumford Hall within the Department of Agricultural and Consumer Economics at the University of Illinois.  The phone number is 217.333.5511 and the website is www.fbfm.org.