Although the weather has been predominantly dry, some producers are reporting issues with seedling diseases in several areas of the state. Consequently, now is an excellent time to brush up on seedling diseases. Seedling diseases are caused primarily by fungi or fungal like organisms that, under the correct conditions (soil moisture, temperature, susceptible variety) can colonize the seed or germinating seedling and cause the seedling to die before it reaches the soil surface, or soon after emergence. These pathogens may release enzymes and toxins that can kill tissues, when then are used by the pathogen to fuel its growth and development.  Seedling diseases largely originate from the soil, where they survive from season to season as recalcitrant overwintering structures or in residue.  When soybeans are planted into fields with these organisms, and conditions favor pathogen development, the organisms can grow, encounter or locate germinating soybeans or developing roots, and colonize tissues, eventually killing the seedling. Yield losses are typically attributed to stand reductions, but on occasion, reduction in growth due to activity of the pathogen may reduce yields.  In cases where stand losses are severe, replanting may be required. 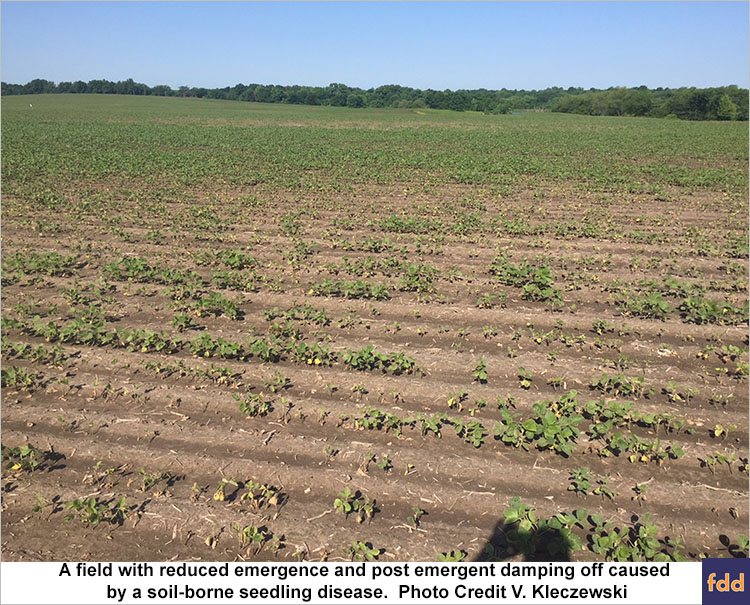 There are several species of Pythium that can infect and cause problems for soybeans.  Pythium are oomycetes, which are fungal like organisms that thrive in wet, saturated soils.  Pythium often causes pre-emergent damping off, or the death of the seedling before it breaks through the soil surface.  Symptoms of Pythium infection include underdeveloped roots and stem with a tan brown, mushy appearance.  When running the roots in between your fingers, the outer tissues will easily slough off.  Because there are numerous species of Pythium that can infect soybeans, this disease complex can be observed over a range of temperatures.  The most important factor for disease development are wet, saturated soils soon after planting.  This disease complex is best managed by: 1) improving drainage in problematic areas of the field, 2) using high quality seed (>85% germination in a standard test) 3) planting into warm soils (>65° F) to favor soybean growth and germination, and 4) Consider using a seed treatment containing an oomycete specific active ingredient.  Remember, oomycetes are not true fungi, and therefore chemicals that control true Fungi may not always be effective on these organisms. 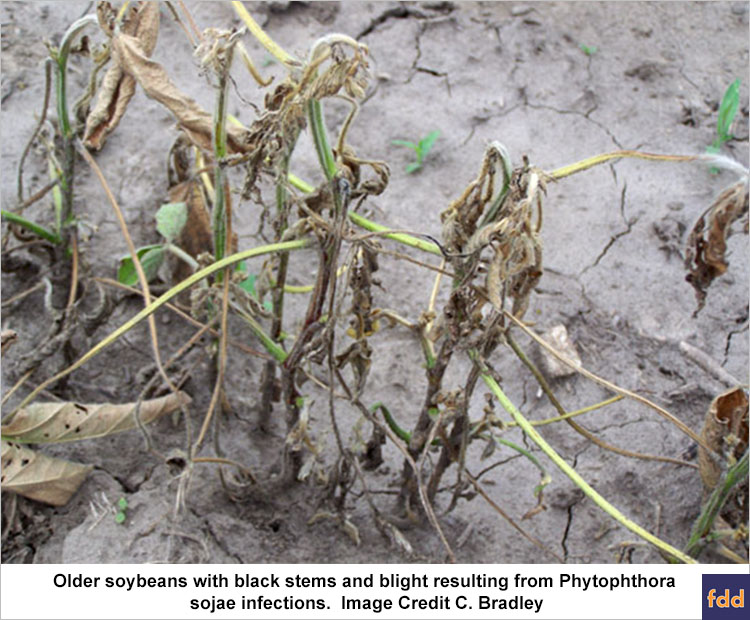 Phytophthora sojae is the most common species associated with Phytophthora seedling blights, although recently other pathogenic species have been associated with soybeans.  Phytophthora are similar to Pythium in that they are oomycetes, and therefore are favored by wet, saturated conditions soon after planting.  Early symptoms of Phytophthora are similar to Pythium and other seedling diseases; however, this disease often causes a black/brown lesion that will extend from the roots to several inches above the soil line on the main stem in older plants.  Such plants are easily removed from soils if pulled from the ground, as the root system will be greatly reduced or rotted.  Resistant varieties, especially those containing multiple P. sojae resistance genes, are very effective for managing this disease.   Seed treatments with oomycete active ingredients can also be effective. 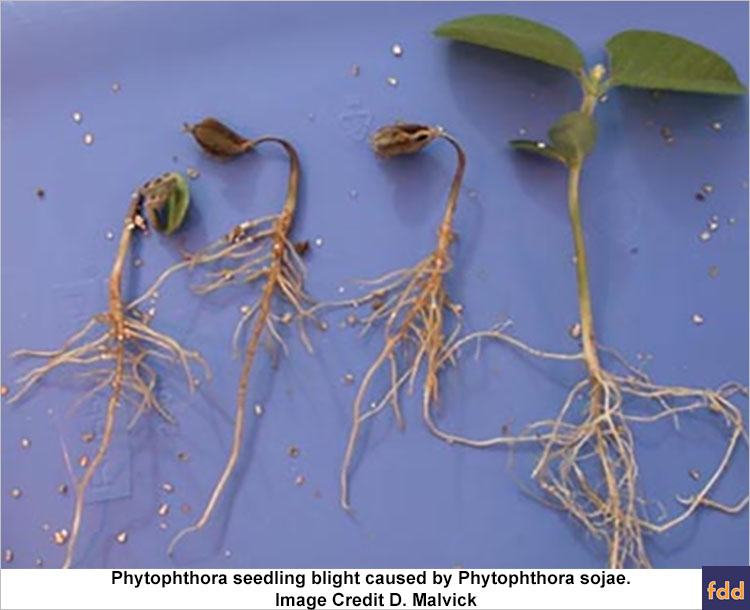 There are numerous Fusarium species that cause soybean seedling diseases, although F. solani is most often associated with pre and post-emergence damping off in soybeans.  .  Consequently, you can find Fusarium on soybeans growing under many different environmental conditions.  Stressed plants tend to succumb to these diseases more frequently.  Fusarium infected plants are often stunted and can have a weak, spindly look to them.  Root systems are underdeveloped and may appear brown.  Management of Fusarium related species often starts with minimizing stress after planting.  In some cases, such as if F. virguliforme (causal agent of Sudden Death Syndrome) is involved, the use of a resistant variety and seed treatment can help reduce early season seedling disease and related stand losses.

Rhizoctonia solani is a fungus causes seedling disease in soybeans.  Symptoms include red to brown sunken lesions (notches) at or just above the soil line that extend to the roots.  Root systems are underdeveloped and rotted.  Unlike Pythium, affected stems tend to be dry or corky.  Although environmental conditions that cause this disease vary with the genetic makeup of the pathogen, the disease typically is not favored by saturated soils but, moist soils at planting and hot (77-85°F) temperatures.  There is no plant resistance to Rhizoctonia, but some varieties are more tolerant to infection and therefore are less likely to suffer serious yield losses if planted.