USDA publishes estimates of total agricultural debt outstanding in the United States (see Economic Reporting Service, USDA website at http://www.ers.usda.gov/). This series is available from 1960 onwards and gives the amount of debt outstanding as of the year-end. 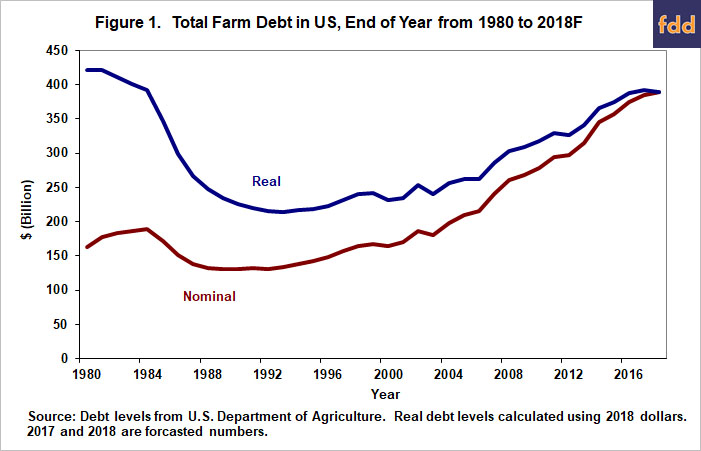 Since 1990, agricultural debt increased an average of 4.1% per year. The rate of increase varied from year-to-year but exhibited no escalating or decreasing trends. The highest rate increases occurred between 2006-2007 and 2013-2014 when increases were 11.6 and 9.5%, respectively. Increases of less than 3% occurred nine times in this period while decreases happened in 3 years with the greatest at negative 3.2% in 2002-2003.

Using the gross national product – implicit price deflator to state nominal debt levels in terms of 2018 dollars gives a different picture of debt levels (see the real line in Figure 1). In terms of 2018 dollars, agricultural debt started at $421 billion in 1980 before declining until 1994. Since 1993, agricultural debt in real terms increased all but four years 2000, 2003, 2012 and forecasted for 2018. Since 1990, the rate of increase averaged 1.8% for real debt levels, much lower than the 4.1% nominal rate increase.  The forecasted numbers for 2017 and 2018 are the highest levels in real terms since 1984

Additional perspective on debt can be obtained by analyzing farm level data from FBFM. Table 1 presents average data for grain farms enrolled in FBFM who have certified-useable balance sheets. The data is stated in nominal terms, and debt levels are stated as of year-end 1991 through 2017. Three measures of debt level are presented in Table 1: debt-to-asset ratio, debt per tillable acre, and interest expense per tillable acre. 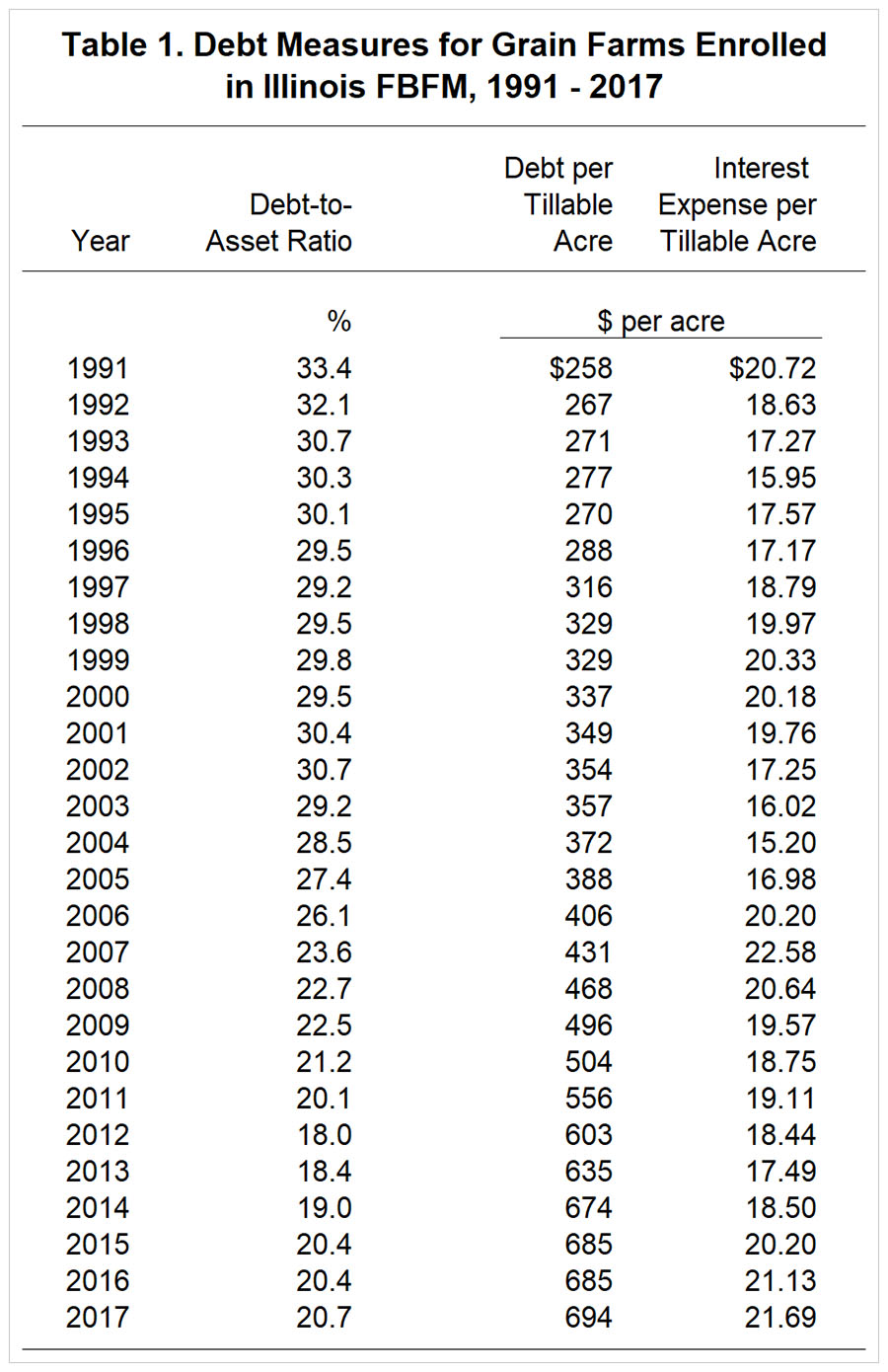 The importance a farmer puts on monitoring their debt level is becoming increasingly important in this period of lower farm returns.  With lower crop prices and higher inputs, we will continue to see the increase in debt per acre.  With interest rates moving higher, this mean a rising interest expense as well.  Also, with some farm assets decreasing in value, this can also lead to higher debt-to-asset ratios even without any additional debt.  Finally, as debt levels increase, farmers need to monitor their term debt and capital lease ratio.  The greater the number, the greater the margin to meet all term debt and capital lease payments.  A ratio of one means that income available is equal to the term debt and lease payments.  In 2016, the average for the 2,507 Illinois farms enrolled in FBFM with useable data was 1.79 compared to 0.42 in 2015.  Establishing or maintaining good recordkeeping during these times will help farmers identify areas of concern faster and be able to make better farm financial decisions.

The author would like to acknowledge that data used in this study comes from the local Farm Business Farm Management (FBFM) Associations across the State of Illinois.  Without their cooperation, information as comprehensive and accurate as this would not be available for educational purposes.  FBFM, which consists of 5,500 plus farmers and 65 professional field staff, is a not-for-profit organization available to all farm operators in Illinois.  FBFM field staff provide on-farm counsel with computerized recordkeeping, farm financial management, business entity planning and income tax management.  For more information, please contact the State FBFM Office located at the University of Illinois Department of Agricultural and Consumer Economics at 217-333-5511 or visit the FBFM website at www.fbfm.org.