Conference negotiations for a 2018 farm bill reportedly continue behind the scenes, but with little indication about progress (Good, August 19, 2018).  In the meantime, a recent article in the Washington Post provided a reminder about important farm bill authorizations that get less political attention, including the Cooperative Extension Service and agricultural research (Fosdick, August 21, 2018).  This article contains a discussion on the topic of extension and research; note at the outset that by reading it you are consuming a product of Extension and research from the land grant university system (farmdoc daily, About Us).

Historical Perspective on Research and Extension

Concerns about agricultural research and extension include those about the appropriate levels of funding, as well as relevance to current and future constituencies.  For example, USDA’s Economic Research Service (ERS) found that public spending on research has fallen since 2009 and that the United States’ share among high income (Organization for Economic Co-operation and Development (OECD)) countries has fallen by 10% since 1960 (Heisey and Fuglie 2018).  The study also found that both public and private investments in agricultural research and development have been key to long-term growth in agricultural productivity and that economic value of such spending is high.

For extension, concerns about funding are at the fore but also stretch beyond it to matters of constituencies and relevance.  The Cooperative Extension Service was created at a time when 30% to 40% of Americans worked in farming and half of the U.S. population lived in rural communities.  Today, less than 2% of the workforce is currently estimated in farming (Lubell, Niles and Hoffman 2014; Hoag 2005).  Moreover, Extension operates in a society with higher education levels and with overwhelming levels of digitally-available information.  This includes the agricultural sector where fewer, more sophisticated farmers work in increasingly specialized production systems and are increasingly inundated with widely distributed information, knowledge and research.  Concerns are that Extension’s survival could be in doubt if it focuses on a dwindling constituency with increasing options.  Its survival may also be in doubt, however, if it expands too far beyond this core constituency; attempting to meet all needs may result in meeting none.

Historical perspective is important to this discussion.  While created by Congress in the Smith-Lever Act of 1914, the roots of extension can be traced to the Morrill Acts of 1862 and 1890, as well as the Hatch Act of 1887 (Kile 1948; Ellison et al. 2017).  The Morrill Acts established land grant colleges and universities, while the Hatch Act established agricultural experiment stations.  The system formed at the local level, with agents funded at the county level beginning around 1906, reached roughly 1,000 county agents within a year of the Smith-Lever Act.

During the early era, Federal efforts to increase production during World War I and World War II conflicted with Federal efforts to reduce or control production to combat the Depression and address the natural resource catastrophe in the Dust Bowl.  These Federal efforts were also substantial drivers of Extension’s development and growth.  Extension and its agents were embedded within land grant university systems and in local rural communities, translating research and delivering it to farmers and rural residents (Garst & McCawley 2015).  They were also an integral part of the founding and growth of farm interest political organizations and power, including most notably the American Farm Bureau Federation (Kile 1948; Benedict 1953; Campbell 1962).

The key concept underlying the founding of Extension and its early development was the use of demonstrations to translate and apply research outside of the laboratory and the university. Accordingly, demonstration is the foundation upon which Extension was built.  The concept traces to the William McKinley administration in the late 1890’s and the use of demonstration farms, especially through the work of Seaman A. Knapp (Benedict 1953).  Knapp was a scientist hired by USDA to help combat the spread of the boll weevil.  He is credited with arguably the most succinct and powerful observation for Extension: “What a man hears, he may doubt.  What he sees, he may possibly doubt.  But what he does himself, he cannot doubt” (Benedict 1953).

Adapting the foundational concepts for agricultural research and extension to modern constituencies and technology should be a critical component in any discussion about future directions and funding.  The concept of demonstration and doing-for-oneself may stretch from traditional on-farm work to digital publications, bulletins and articles to web-based tool capabilities that allow users to explore issues and design their own solutions or decisions.  Combining these capabilities and integrating them with online and in-person communications could also be important elements (Ellison et al. 2017; farmdoc daily, December 8, 2017).  At the least, advanced modeling and visualization capabilities in an era of exponentially-increasing data about food, farming, farmers, and the natural world should offer vast potential for demonstration, extension and research.  Authorities designed by Congress in farm bills and sufficient levels of funding from Congressional appropriations and state and local contributions will be vital to meeting this potential.

An Overview of Funding and Authorities

Title VII of the farm bill, including the 2018 versions passed in the House and Senate, contain a long list of reauthorizations for Cooperative Extension Service funding and authorities, as well as for research covering agriculture, food, natural resources and energy.  Unlike the titles with substantial mandatory funding (e.g., Titles I, II and IV), Title VII contains mostly authorizations that have to subsequently be funded by the House and Senate Committees on Appropriations.  This generally appears to limit the political and partisan disputes over the title and its authorizations.

The 2008 Farm Bill undertook a reorganization for research, education and extension authorities.   Congress created the National Institute of Food and Agriculture (NIFA) within the U.S. Department of Agriculture (USDA) which assumed all authorities previously under the Cooperative State Research, Education and Extension Service (CSREES).  These authorities were generally continued by the 2014 Farm Bill and Congress created the Foundation for Food and Agriculture Research (FFAR) to further advance agricultural and food research by providing additional support for key problems and issues.  Notably, Congress provided FFAR with $200 million in mandatory funding, under which grants had to be matched equally by non-Federal funds.  Both the House and Senate farm bills generally continue the research, education and extension authorizations with differences between them on some specifics.  For example, the Senate transfers an additional $200 million in mandatory funding to FFAR and adds authorities for an advanced research and development pilot, as well as an extension design and demonstration initiative.

Figure 1 illustrates the appropriated funding provided to NIFA by Congress, including funding for Extension activities and Research and Education activities for fiscal years (FY) 2009 through the estimates for FY2018.  Figure 1 also includes the funding proposed by the President’s Budget for FY2019.  Table 1 was compiled from USDA, Office of Budget and Program Analysis (OBPA), Budget Explanatory Notes for Congressional Appropriations Committees (USDA, Budget Congressional Justifications). 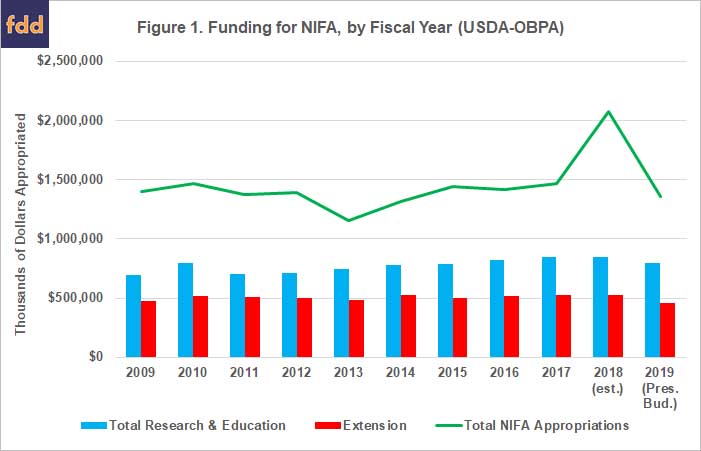 As established by the Smith-Lever Act of May 8, 1914, funding under the Cooperative Extension Service is for the national (out-of-classroom) education network that uses scientific knowledge focused on issues and needs in agriculture and rural America.  Approximately two-thirds of its Federal funding is formula funding for extension activities, allocated to the States on the basis of the rural and farm population of each State (and territory).  Smith-Lever funds are allocated as follows:  20% is first divided equally among the States; 40% to states based on their proportion of rural population; and 40% to the states based on their proportion of farm population.

A notable component of Extension funding is the interaction among Federal, State and local investments.  Traditionally, one-third of Extension’s funding came from Federal appropriations, one-third from the State, and one third from county or local funding (Franz & Townson 2008).  Today far more variation exists in this traditional balance.  Each partner (Federal, State and Local) may fund Extension ranging from 10% to 70% depending on the state, its fiscal situation and even the availability of local funding (Franz & Townson 2008).  Regardless of the exact level of contribution, the statute requires that Federal funds are matched dollar-for-dollar by non-Federal funding.

Among the many accounts for research in Title VII, one of the most prominent is the Hatch Act of 1887 (7 U.S.C. 361a-361i).  Funds appropriated by Congress are allocated to all 50 states, the District of Columbia, Puerto Rico, Guam, the Virgin Islands, Micronesia, American Samoa, and the Northern Mariana Islands for agricultural and rural life research.  A fixed base (1955 allocation) exists.  Funds appropriated in excess of the base are allocated such that 20% goes to each State equally. Not less than 52% of the excess funds are allocated so that half are distributed proportionately to the relative rural population of each State and half proportionate to the relative farm population of each State.  These funds must be matched dollar-for-dollar by non-Federal funds.  Funding for research is also appropriated to the Agriculture and Food Research Initiative (AFRI) for competitive grants for fundamental and applied research, extension and education that addresses food and agricultural sciences.  Of the funds available for research, no less than 60% can be used for fundamental research and no less than 40% for applied research.  Figure 2 illustrates appropriations for the two major research accounts (Hatch and AFRI) from USDA OBPA. 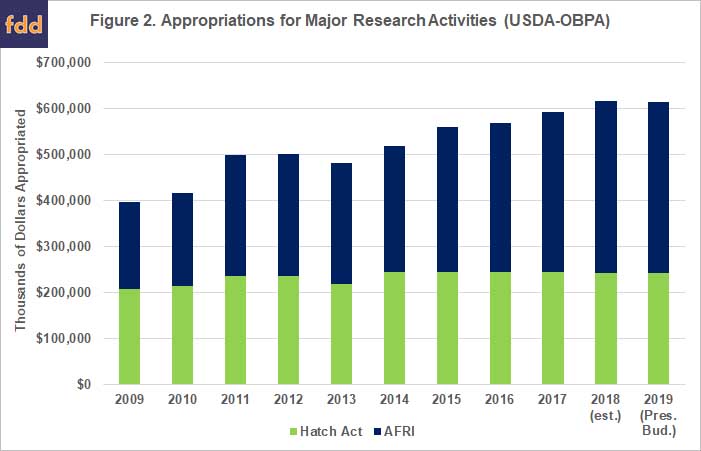 Concerns about the relevance of agricultural research and extension in a changing society are complicated.  They include funding challenges and a struggle to identify constituents, while adequately meeting their needs.  Funding often follows relevance, however, and it may be that the questions of relevance in a modern, information-inundated, technologically-savvy and networked age prove to be the most profound and difficult.  If the foundational concept in research and extension history holds—that a person may doubt what they are told but not what they do themselves—then these questions and concerns should explore how it operates in the digital age of social networks, big data, comprehensive modeling and vast visualization capabilities.  These are matters to be worked out at the local level, within universities and among communities or constituencies, as well as in the halls of Congress as it debates a farm bill.

Ellison, B., N. Paulson and J. Coppess. "The Value of Decision Tools to Farmers and Landowners." farmdoc daily (7):226, Department of Agricultural and Consumer Economics, University of Illinois at Urbana-Champaign, December 8, 2017.