Today’s post provides the third quarterly update on RIN generation for 2018.  Generation figures and projections are based on available data from EPA’s EMTS through September of 2018, with annual projections compared with the target mandate levels outlined in the final rulemaking for 2018. The previous RIN updates (farmdoc daily, July 26, 2018; May 23, 2018) provided summary net generation estimates for the first and second quarters of 2018. 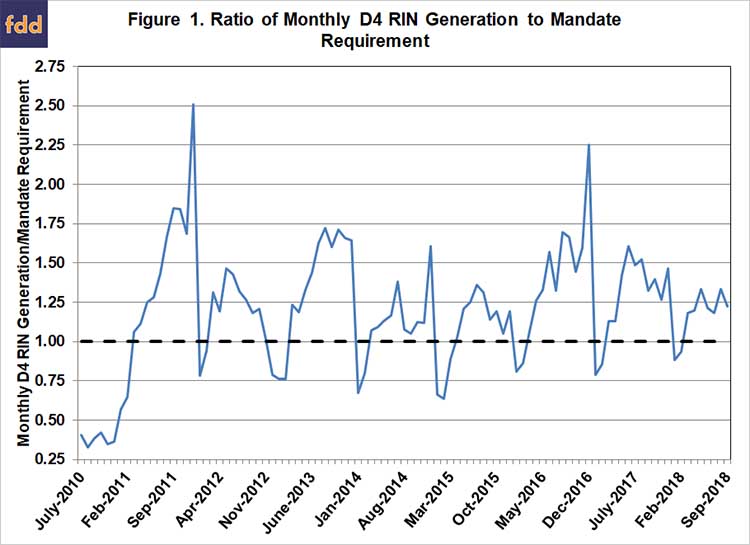 Combining the D4 and D5 RIN generation projections results in a total estimated gross generation at or slightly exceeding the 4.01 billion RIN non-cellulosic advanced mandate level for 2018 (4.29 billion total advanced less the 288 million cellulosic). Retirements of a portion of those RINs due to biodiesel exports and non-compliance purposes will ultimately reduce the amount available for compliance. 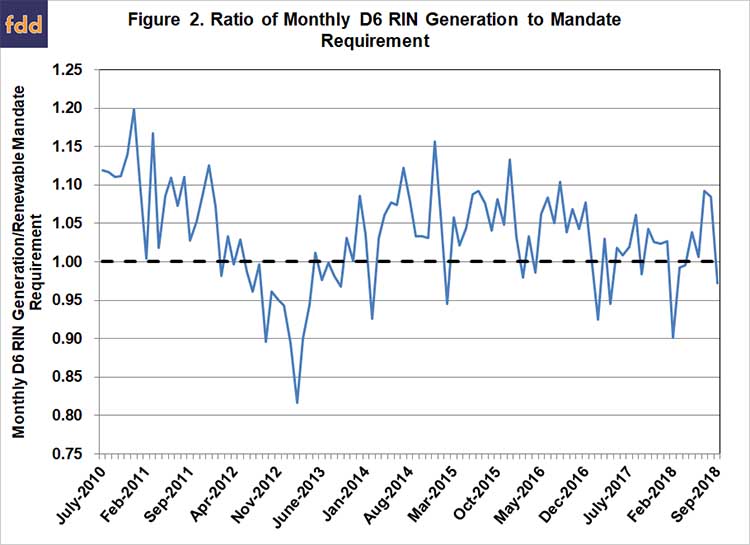 While this rate of generation would be sufficient to cover the 15 billion RIN renewable gap portion of the overall mandate for 2018 (19.29 billion total less the 4.29 billion advanced mandate), a portion of these D6 RINs will be unavailable for compliance due to ethanol exports and other non-compliance retirements.

Data on RIN generation from EPA’s EMTS through the third quarter of 2018 indicates that the rate of gross generation of all categories of RINs is at or slightly above that experienced in 2017 and, similar to previous years, has strengthened in recent months relative to earlier in the year. Gross generation will likely be sufficient to meet compliance requirements for all but the cellulosic portions of the RFS mandates for 2018.

However, the pace of exports of biodiesel and denatured ethanol in 2018 has also exceeded those experienced in recent years, and are on pace to reach record levels. Exports and other non-compliance retirements will ultimately reduce the amount of 2018 RINs available for use towards mandate compliance.

Assuming a loss of around 150 million D4 RINs due to export in 2018 would put net generation of non-cellulosic advanced RINs in the neighborhood of the 4.01 billion mandate level towards which D4 and D5 RINs can be applied.  Gross generation of 15.3 billion D6 RINs coupled with 700 million gallons in denatured ethanol exports would put net generation at around 14.6 billon, falling 400 million RINs short of the 15 billion RIN renewable gap component of the overall mandate. This suggests that RIN generation rates need to continue to increase through the last quarter of 2018, the rate of exports needs to decline, or carryover RINs from previous years may be required for 2018 compliance.