Dairy policy has been a cornerstone US farm policy issue of 2018.  Along with cotton policy, it was initially addressed in the Bipartisan Budget Act of February 2018.  Dairy policy has continued to receive considerable attention during the farm bill debate, likely because of financial stress in the US dairy sector.  This article discusses dairy policy since the 2014 Farm Bill with an emphasis on the changes contained in the House and Senate farm bills.  The proposed changes most impact mid-size dairy farms.

MPP-Dairy (Margin Protection Program for Dairy Producers) was initiated by the 2014 Farm Bill as a replacement for the Dairy Price Support Program and Milk Income Loss Contract payment program (see Congressional Research Service).  Payments were based on a bimonthly margin defined using the US All Milk price less a feed cost measure incorporating US average prices for corn, soybean meal and hay.  A no-premium base coverage level of $4.00 per 100 pounds ($4.00/cwt.) was offered.  Added coverage between $4.00 and $8.00/cwt could be elected.  Farms elected whether to cover from 25% to 90% of their milk production history.  Production history is the highest production in 2011, 2012 or 2013.  Fixed producer-paid premiums were specified for covered production of less than 4 million pounds (Tier I production) and covered production of more than 4 million pounds (Tier II production) (see Figure 1). 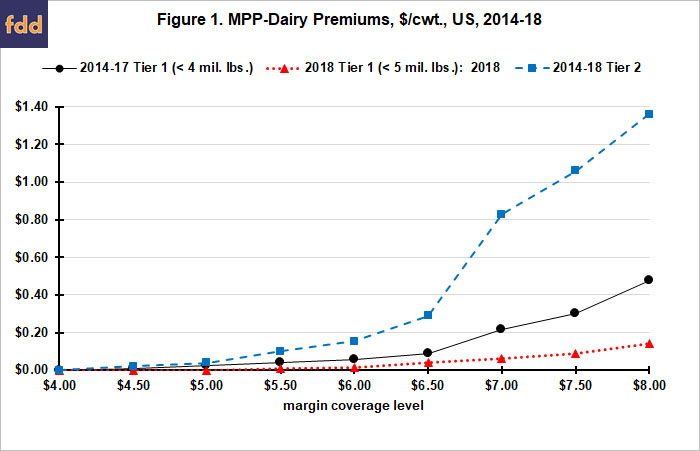 MPP-Dairy made few payments through 2017.  Farm-paid premiums exceeded indemnity payments by about $75 million over 2014-17.  Declining participation lead to program changes enacted in the Bipartisan Budget Act.  Changes included lower premiums for Tier I production, especially at the $8.00/cwt. margin (see Figure 1); monthly payment calculations, an increase in the Tier I limit to 5 million pounds, and a sign-up retroactive to January 2018.  At the end of the signup period, the changes guaranteed a net payment for Tier I production and the $8.00/cwt. margin.  Assuming MPP-Dairy makes no more payments in 2018, net payments will total almost $24,000 for farms who had $8.00/cwt. coverage on 5 million pounds of Tier I production.

MPP-Dairy ends December 31, 2018, but both the House and Senate draft farm bills extend the program through 2023.  Both bills also: 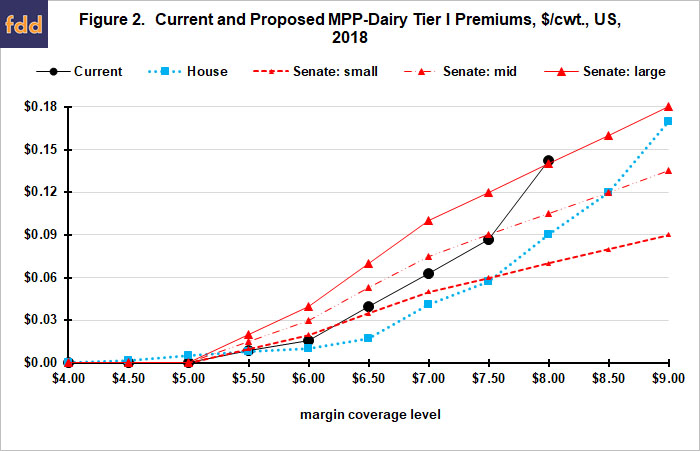 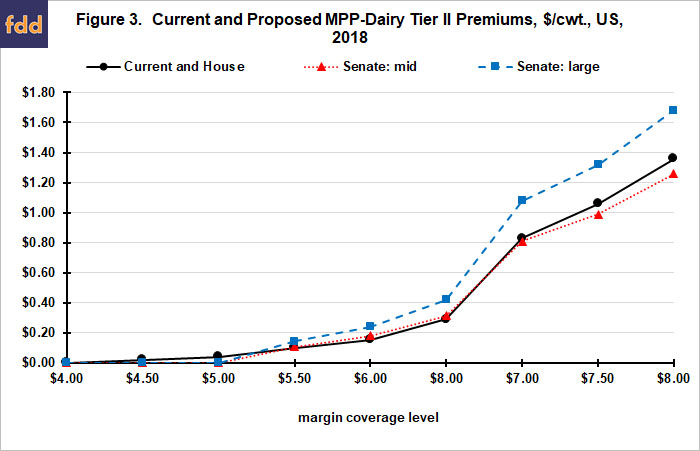 Other significant differences include:

It is always tenuous to project future payments by a program from history.  In addition, payments from a new program may alter supply response, particularly if its payments are large enough to keep financially-stressed farms from exiting.  Nevertheless, historical size and pattern of the Actual Dairy Production Margin (ADPM)—Dairy-MPP version of income over feed cost—is a useful and reasonable starting point for understanding potential payments. 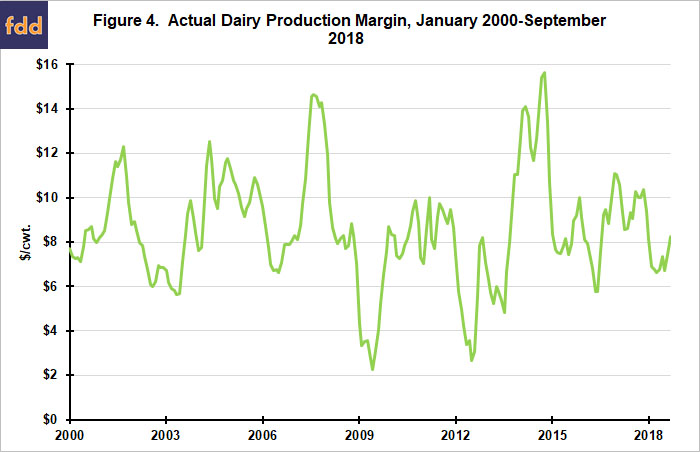 Tier II protection is not available at $8.50 or $9.00/cwt. margins.  Moreover, its premiums is over $1/cwt. higher than premiums for Tier I protection at the $8.00 margin, making it an undesirable option in most years.  Tier I is thus our focus. Unsurprisingly given Figure 4, average annual net MPP-Dairy Tier I payments are period dependent.  For the current MPP-Dairy version, average payment net of producer-paid premiums for the $8.00 margin varies from $0.27/cwt. per year for 2000-06 to $1.02 per year for 2007-13 to $0.14/cwt per year for 2014-18 (see Figure 5).  The size of this range underscores the importance of the distribution used to estimate future payments by MPP-Dairy. 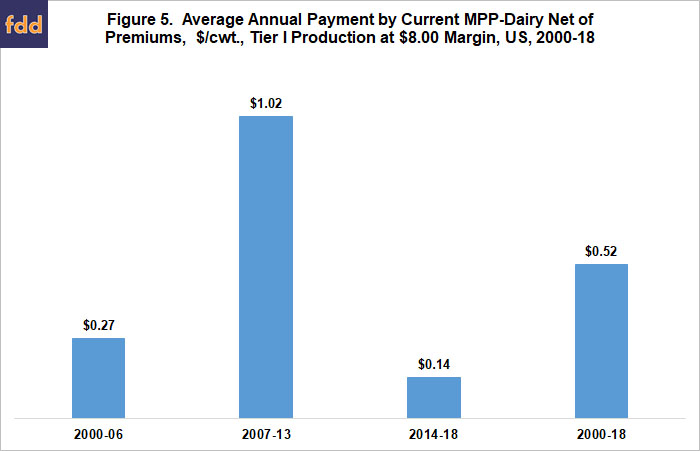 In the discussion that follows 2014-18 is used as the comparison period.  It is the latest period, does not include the period of high crop prices which appear unlikely to be repeated in the near future, and is a period over which MPP-Dairy existed.

For 2014-18, the discounts proposed by the Senate increase average annual payment for small and medium dairy farms by $0.07/cwt. and $0.06/cwt., respectively, relative to large dairy farms (see Figure 6).  By comparison, raising the highest margin from $8.00/cwt. to $9.00/cwt. roughly tripled average payment per cwt. on Tier I production (see Figure 6).  Average payments at the $9.00 margin are similar for the House version and for large dairy farms in the Senate version. 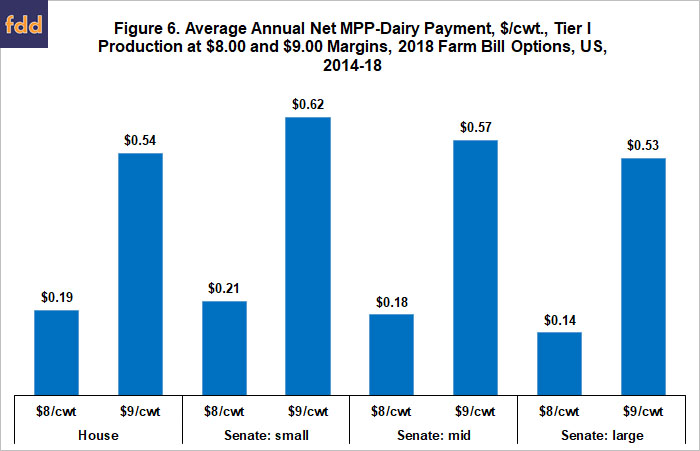 Financial stress of dairy farms has attracted considerable attention the past year.  It is likely one of the reasons that the changes made to MPP-Dairy in early 2018 effectively guaranteed a payment at signup.  A second key current economic feature of the US dairy sector is strong economies of size (see Zulauf, farmdoc daily May 25, 2017 and August 17, 2017).  Table 1 therefore compares average annual payment by the Senate proposal on MPP-Dairy at the $9.00/cwt margin for 2014-18 to average profit above total cost by dairy farm size as reported by USDA, ERS (U.S. Department of Agriculture, Economic Research Service).  Data for the latter variable exist for 2014-17 but not 2018.  Thus, the two variables cover different periods.  While this difference needs to be kept in mind, the comparison is reasonable and involves the latest available data.  Impact is measured as the percent change in profit or loss (see Data Note).  The Senate proposal most impacts profitability of farms with 100 to 1000 cows, especially 200-499 cow farms.  It impacts small farms more than large farms.  MPP-Dairy payments are not large enough to turn a loss into a profit for any farm size.  It is worth noting that considerable controversy surrounds the measurement of cost on dairy farms, especially on small farms.  Thus, these conclusions may be dependent on the data set chosen to measure cost and return.