On November 7, 2018, the Congressional Budget Office (CBO) reported that the total federal budget deficit for fiscal year (FY) 2018 was $779 billion or 3.8 percent of gross domestic product (GDP) (CBO, November 7, 2018).  This represented a $113 billion increase in the deficit compared with FY 2017.  Issues of federal budgeting—debt, deficit, spending and tax revenues—have been among the most consistently dominant issues in Washington DC for decades.  They are also difficult to comprehend but have substantial implications.  This article begins a series discussion of various issues regarding the federal budget, the debt and deficit and Congressional attempts at reform and discipline.

Budgeting is considered the “life-blood of the government, the financial reflection of what the government does or intends to do” (Wildavsky, 1961).  Repeated efforts by Congress to reform the federal budget and institute discipline on itself have been controversial; not the least of which because of the implications for Congress, sovereign power, policymaking and our system of government (Doran, 2018; Levinson and Sachs, 2015; Garrett, 2000; Kahn, 1986; Kamlet and Mowery, 1985).  It is a matter linked directly to the Constitution and the enumerated powers of Congress; the powers to tax and spend public funds, as well as borrowing money, paying debts and the requirement that all spending be pursuant to appropriations (Stith, 1988).

As the life blood of government, budgeting occupies a central place in politics and policy because it involves and determines the distribution of scarce resources among the citizenry and competing interests.  It is the process of collecting revenues from some among the citizenry and interests and distributing it among others.  Because there are always more demands than funds available, budgeting also necessarily involves conflict among competing interests (Wildavsky, 1975).  The farm bill, in fact, can serve as a window into this matter, providing specific examples—and some cautionary lessons—about how budget discipline and reforms have impacted policies, policymaking, as well as the implications for the legislative process (Coppess, 2018).

To complete this background, Table 1 is a timeline highlighting some of the major budget legislation produced by Congress.  It also summarizes some of the specific methods Congress has sought to put in place for budget discipline and reform.  It is not an exhaustive list, nor is it intended to be, but rather a snapshot of key and relevant legislative efforts.

The federal budget is measured in trillions of dollars, which can be difficult to conceptualize.  CBO reported in June that federal budget deficits and the federal debt would increase over the next 30 years with expectations that it will reach the highest level of national debt in history as measured against GDP (CBO, June 26, 2018).  Figure 1 is CBO’s chart of federal debt held by the public as measured as a percentage of GDP from its June report.  The chart covers the entire history of federal debt, from the nation’s founding and through CBO’s projections for the future. 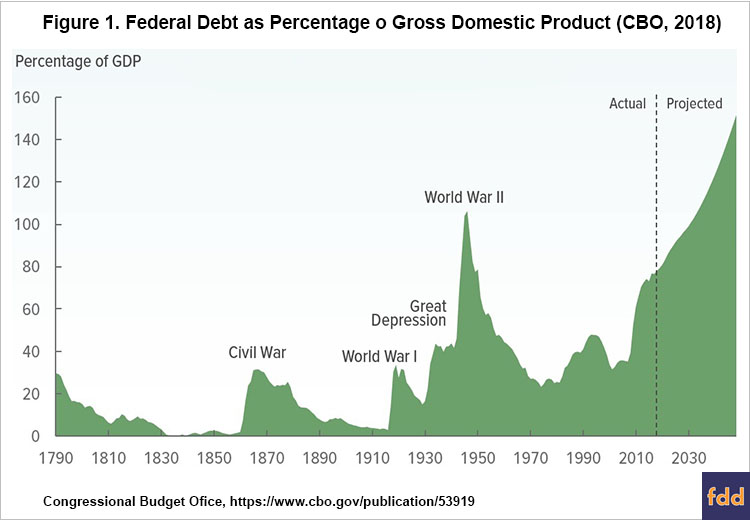 The federal deficit is simply the difference between revenues (e.g. taxes) and outlays or spending, where outlays exceed revenues.  Figure 2 illustrates revenues and outlays from the historical budget data reported by CBO in April 2018 (CBO, April 2018). 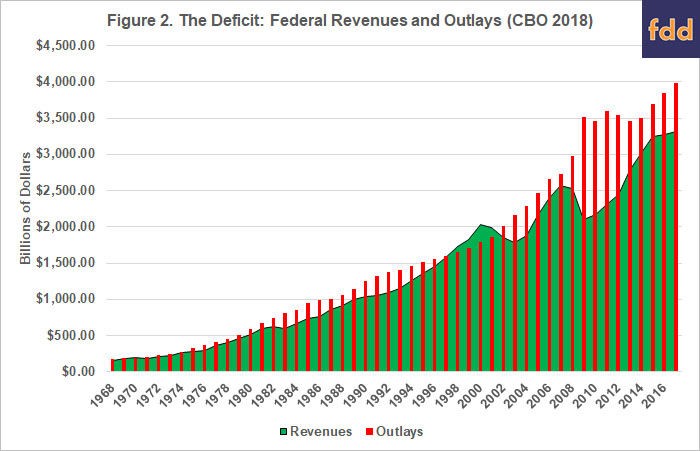 Where spending (outlays) exceeds revenues in any fiscal year, the federal budget runs a deficit.  Figure 3 illustrates the deficit or surplus from the CBO historical budget data.  As is evident, surplus has been rare in recent times; since 1968, CBO reports surplus only in FY 1998 through FY 2001.  Figure 3 also highlights the substantial impact the Great Recession of 2008 had on the federal deficit. 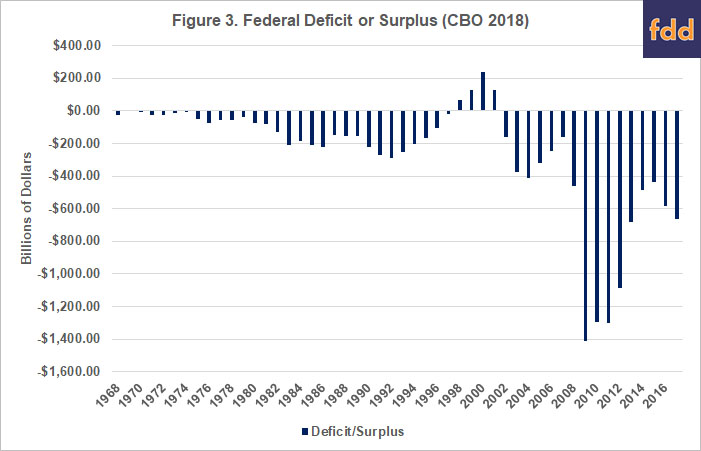 The federal debt is the accumulation of deficits over multiple fiscal years.  Figure 4 illustrates the federal debt held by the public as reported by CBO. 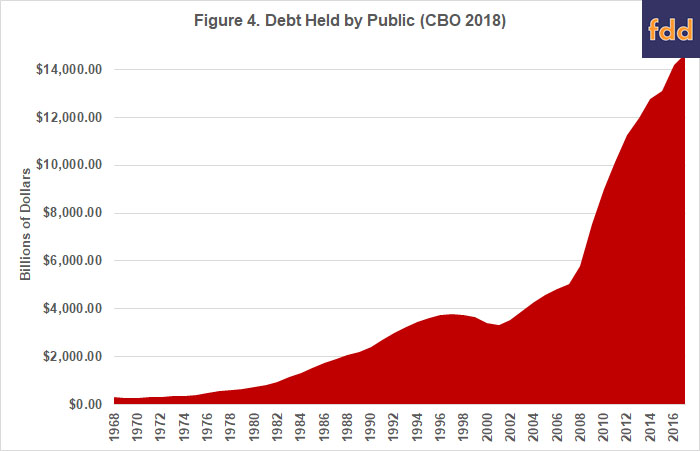 It may be all-too-easy to jump to conclusions from these initial perspectives and this brief review of budget issues.  The numbers on deficit and debt alone would appear to call into question the effectiveness of budget discipline, control or reform.  There is, however, much more to the picture.  The federal budget is a massive and complex matter that has vast implications for the Nation and all federal policies.  Future articles in this series will explore further aspects of the federal budget, the budget process and Congressional attempts to reform it.

Jonathan Coppess, The Fault Lines of Farm Policy: A Legislative and Political History of the Farm Bill (University of Nebraska Press 2018), https://www.nebraskapress.unl.edu/university-of-nebraska-press/9781496205124/.

Paul W. Kahn, “Gramm-Rudman and the Capacity of Congress to Control the Future,” 13 Hastings Law Quarterly 185 (1986)