Land-use change is in the forefront of human-nature interaction and is the nexus of food security, farm economy, greenhouse gas emission, and ecosystem services. How the development of corn-based biofuel affects land-use change, particularly at the extensive margin, has been the focus of the debate regarding the environmental and economic impact of U.S. biofuel policies since the ethanol boom about one decade ago. Many studies have investigated the question; however, no consensus has been reached.

Incentivized by the Energy Policy Act of 2005 and the U.S. Energy Independence and Security Act of 2007, the corn-based ethanol industry in the United States expanded exponentially in the studied period (2003-2014). For instance, the number of corn-based ethanol plants increased from 55 in 2003 to 201 in 2014, almost quadrupled. The total ethanol production capacity increased from 2.8 billion gallons in 2003 to 14.6 billion gallons in 2014. Graphs (a) and (b) in Figure 1 (adapted from Li et al. 2018) depict the ethanol production capacity and the number of ethanol plants over 2003-2014, from which we can see that ethanol production plateaued around 2009. On the other hand, crop prices over 2003-2014 experienced roughly two distinct cycles (see Graphs (c) and (d) in Figure 1). Land uses (corn acreage and total cropland) did not fluctuate significantly during the same period (see Graphs (e) and (f) in the figure). 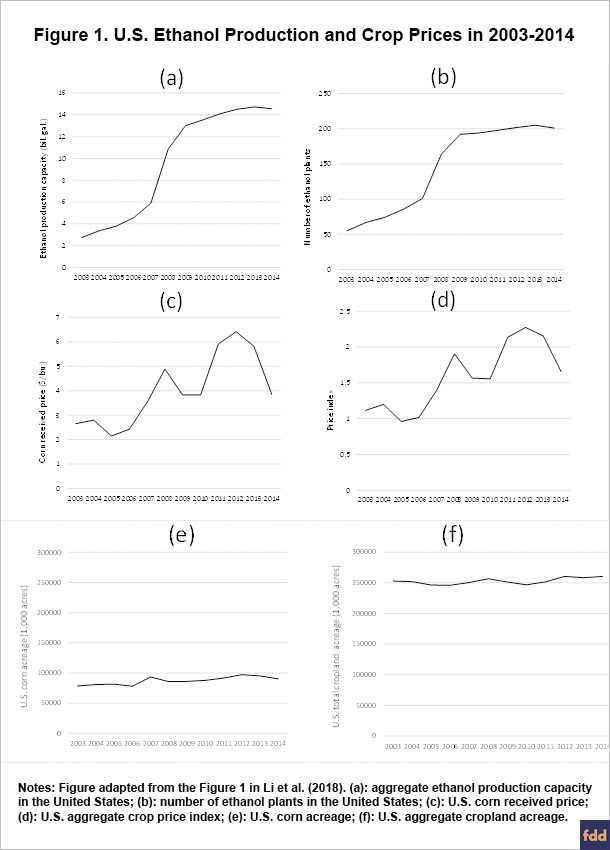 Complete citation for the study discussed here is: