This article updates the farmdoc daily article of November 30, 2018 by examining the dairy policy provisions in the recently passed Agricultural Improvement Act of 2018.  It renames the current Margin Protection Program for Dairy Producers (MPP-Dairy) the Dairy Margin Coverage Program (DMC). DMC, which is authorized from January 1, 2019 through December 31, 2023, has enhanced coverage and lower premiums relative to the current MPP-Dairy program. 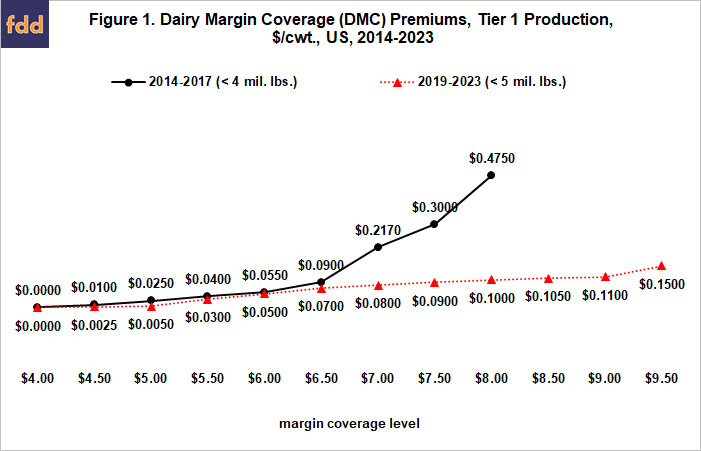 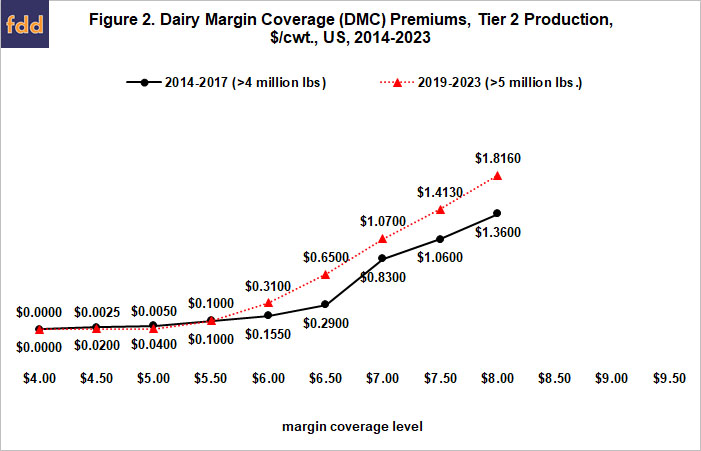 5-Year Sign-Up Discount:  Any dairy that signs up in 2019 and commits to keep its coverage decisions for the life of the 2018 farm bill will receive a 25% discount on their annual premium.

Multi-Producer Dairies:  A multi-producer dairy is treated as a single operation under DMC.  However, not every owner has to sign up for DMC.  Total premium due and total payment will be adjusted downward to reflect the proportion of ownership participating in DMC.

New Dairies:  Dairies started after January 1, 2014 are provided an option to establish a DMC production history.  DMC payment is prohibited to a dairy the Secretary of Agriculture, hereafter Secretary, determines reorganized its operation solely to qualify as a new DMC operation.

Feed Cost Review:  The Secretary is required to submit reports to the relevant congressional committees that (1) evaluate the representativeness of data used to calculate DMC feed cost per cwt. of milk and that (2) detail costs incurred by dairies that use corn silage and compares this cost with the feed cost of corn.  The Secretary must also revise monthly surveys to report prices for high-quality alfalfa hay in the 5 top milk producing states measured by volume.

DMC and Livestock Gross Margin for Dairy Program (LGM):  Dairies are permitted to participate in both DMC and LGM on the same production.  Moreover, dairies locked out of the revised 2018 MPP-dairy program due to LGM participation are allowed to retroactively participate in MPP-dairy for the months in 2018 they were excluded from participation.

2014-2017 Premium Repayment:  The Secretary is required to repay each dairy that participated in MPP-dairy during calendar years 2014-2017 part of the difference between total MPP-dairy premiums and payments.  Repayment equals (1) 75% of the difference if repayment is taken as credit toward DMC premiums or (2) 50% of the difference if repayment is taken as cash.  If ownership and production history of a dairy has been sold or transferred, the current owner receives the refund.  Owners of a dairy that ceased operation or been dissolved will receive a refund based on their ownership share.  An application is required for repayment to occur.

Milk Donation Program:  The current Dairy Product Donation Program is repealed; a new Milk Donation Program is authorized.  Objective is to make it easier for dairy producers, processors, and cooperatives to donate fluid milk to public or private nonprofit organizations that provide food assistance to low income groups.  Mandatory funds of $9 million in fiscal 2019 and $5 million each succeeding fiscal year are provided to reimburse eligible costs by “accounting to the Federal Milk Marketing Order pool at the difference in the Class I milk value and the lowest classified price for the applicable month (either Class III milk or Class IV milk).”  Preference is to be given to donner-distributor partnerships that provide funding and in-kind contributions.  Resale of donated products is prohibited, and audits are required.

Historic DMC Payments: It is always tenuous to project future payments by a program from history.  Payments may alter supply response, particularly if payments are large enough to keep financially-stressed farms from exiting.  Nevertheless, history is a useful and reasonable starting point for understanding potential payments.  Tier II protection has a premium near $2/cwt. for its highest available margin ($8.00/cwt.), making it an undesirable option in most years.  Thus, Tier I protection is our focus.

Consistent with the November 30, 2018 farmdoc daily article, the historical period used to estimate payment is the recent period from January 2014 through October 2018, the latest available month.  To simplify and focus the presentation, only coverage margins of $8.00/cwt. and above are discussed as they are likely to be the most attractive coverage levels for participating farms.  Average annual net payment over the 2014-2018 period ranges from $0.18/cwt. to $0.83/cwt. at the $8.00/cwt. and $9.50/cwt. margins, respectively; assuming no 5-year sign-up discount (see Figure 3).  The 5-year discount adds an extra $0.02-$0.03/cwt. at each coverage margin.  The obvious implication is that adding coverage margins above $8/cwt. is a major change in dairy policy.  For 2014-2018, having the highest margin coverage level at $9.50/cwt instead of the current $8.00/cwt. would have increased per cwt. average annual Tier I protection payments by 330% or $0.66/cwt. ($0.86-$0.20). 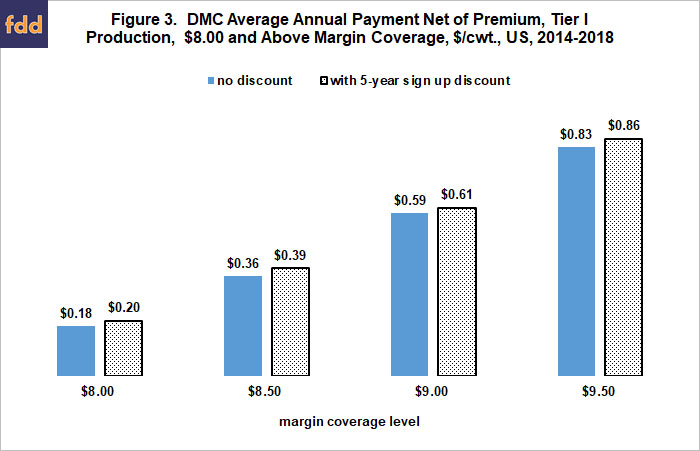 One Perspective of DMC Impact on Dairy Farm Profits:  Financial stress of dairy farms has attracted considerable attention the past year.  To provide one perspective on how DMC may impact dairy profitability, Table 1 presents average annual 2014-2018 payment at the $9.50 margin by dairy farm size relative to milk production profit and loss as reported by USDA, ERS (U.S. Department of Agriculture, Economic Research Service).  Economies of size is a key feature of the US dairy sector (see Zulauf, May 25, 2017 and August 17, 2017 farmdoc daily).  Dairy cost of production data are available for 2014-2017 but not for 2018.  Thus, the two variables cover different periods.  While this difference must be kept in mind, the comparison is reasonable and involves the latest available data.  The average payment data used in Table 1 does not consider the 5-year sign up discount.  The estimated average payment of $0.83/cwt. (see Figure 3) is reduced for the smallest herds by 5% to $0.79/cwt to account for 95% being the highest amount of production history DMC can cover.  We assume that larger dairies can exactly adjust the coverage margin so they exactly cover the 5 million pound cap on Tier I protection.

Impact is measured as both $/cwt. and percent of profit or loss (see Data Note).  The $/cwt. impact is greatest for the smallest dairy farms as annual production is less than the 5 million pound limit for Tier I protection.  $/cwt. impact declines as milk production increases above 5 million pounds.  Measured as percent change in profit or loss, impact is greatest for 200-499 cow herds.  While a loss still occurs, it declines by 41%.  DMC 2014-2018 payments did not result in any farm size turning a loss into a profit.  DMC is estimated to increase per cwt. profit on 500-999 and 1000 or more cow dairies by 18% and 3%, respectively.  It is worth noting that considerable controversy surrounds measurement of cost on dairy farms, especially on small dairies.  Thus, these findings may be dependent on using the USDA, ERS data set to measure cost and thus profit and loss.