Average Illinois soybean yield first exceeded 50 bushels per acre in 2004, when it was 50.5 bushels. It was 51.5 bushels in 2010, and 50 bushels in 2013. Over the five years beginning in 2014, it was 56, 56, 59, 58, and, in 2018, an astonishing 65 bushels per acre. Yield in each of the past five years was above trendline, which is a first—the longest stretch of above-trendline yields in the previous 30 years was for three years. In each of three years—2004, 2014, and 2018—Illinois soybean yield exceeded the previous record by about 10 percent. Illinois corn yields were record-high in each of these three years as well, showing that both crops tend to respond similarly to unusually good growing conditions.

Most people have already selected varieties for 2019. There are a lot of good varieties and a lot of information available on their performance. The University of Illinois soybean variety trials are only a small part of this information, but there are comparisons there that might not be available from other sources. Still, seed companies remain the primary source for information about the varieties they sell, and finding topnotch genetics shouldn’t be too difficult.

One issue that continues to attract interest is how varietal maturity affects yield. In the UI variety trials, entries at each location are separated in roughly equal numbers into two sets: one with longer- and one with shorter-maturity varieties. These two sets are planted in separate trials, mostly so the early-maturing ones can be harvested first if a long delay will compromise their performance. Averaged across 13 UI testing sites in 2018, the “early” varieties averaged 74.8 bushels per acre, and the “late” ones averaged 73.5 bushels per acre. So across a range of maturities within and among regions running from north (average MG 2.7) to south (average MG 4.2) in Illinois, maturity was not consistently related to yield. We might want to choose a mixture of earlier and later varieties to spread harvest some, but should concentrate more on yield potential than on maturity.

We continue to hear a great deal of talk about the need to plant soybeans early in order to get high yields. This is hardly a new discovery: ever since we saw major improvements in seed quality and seed treatments several decades ago, we have known that early-planted soybeans were capable of emerging without the need to wait until soils had warmed up to 55 or 60 degrees before planting.

In recent years, though, some have taken “early” planting to an extreme, with claims that soybean planting should some before corn planting, as early in March if possible. Figure 1 summarizes the results of 26 planting-date trials conducted in central and northern Illinois between 2010 and 2016. Our target planting dates were in mid-April and then about every two weeks to early June. Planting dates were converted to days after April 1, and yields within each trial to percent of maximum yield for that trial. 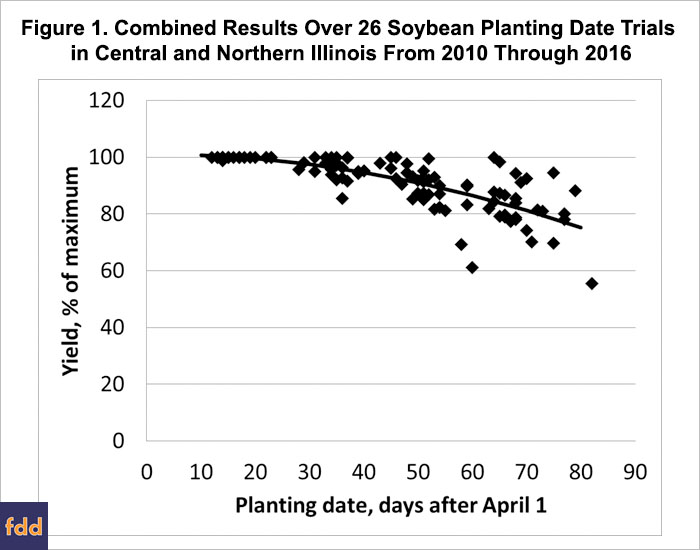 These results showed little yield decrease when planting was done by May 1 (day 31), a decrease fo about 7% if planting was on May 15 (day 46), and 14% lower yield if plfanting was on June 1 (day 62). While we did not plant before April 10 in any of these trials, the fact that yields were no higher from planting on April 15 than on April 30 shows that the “early planting” advantage is generally maximized if planting can be done by the end of April.

Other than showing that it “can be done,” it’s not clear what advantage there might be in planting soybeans in March, or even, as some did in 2017, in February. Emerged soybean plants are can tolerate temperatures in the upper 20s, with the exception of the few days when the “hypocotyl hook” appears above-ground but before it straightens (in response to light hitting its upper surface) to pull the cotyledons above the soil surface. If frost hits at this point, the exposed hook (stem tissue) can be killed, which kills the seedling. Seedlings are usually in slightly different stages down the row, so frost at this stage will seldom kill all of the seedlings, but it can certainly thin them out.

Soybeans planted in March 2018 encountered cold, wet conditions, including several snow events, during the month after planting. While any emergence under such conditions testifies to the toughness of soybeans, low stands likely led to replanting most March-planted soybeans in 2018.  Besides stand loss, soybean plants exposed to low temperatures early in the season typically stay short, and often do not yield as much as later-planted soybeans. This shortening might have been partially reversed by increased internode elongation during very warm May weather in 2018. Still, soybeans planted in late April in 2018 had better stands than those planted very early, and with a rapid start under warm temperatures in May, probably yielded more than those that survived March planting. The goal of planting early is not to have the crop survive, but to have it yield more. Low stands and short plants aren’t generally conducive to highest yields, and issues with crop insurance coverage may be another disincentive. There is little potential reward for taking the risk of planting very early.

Should later-maturing varieties be planted first in order to take maximum advantage of the longer time in the field? There’s no problem with doing that, although early planting moves up harvest date some, so works counter to the goal of spreading harvest time by using different maturities. In 2018 we ran a trial at Urbana, supported by a seed company, to see how varietal maturity affected response to planting date. The first planting date was April 26, the last was June 6, and varieties ranged in maturity from MG 2.3 (very early for this location) to MG 3.6, which is a little later than average for this location. 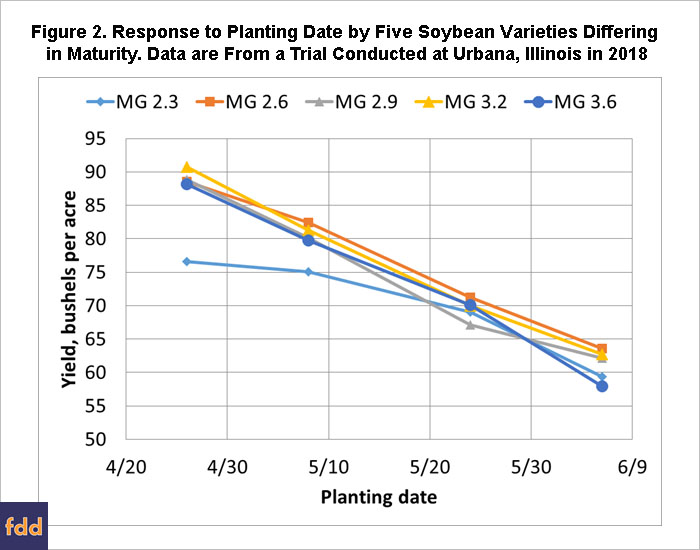 The month of May 2018 was much warmer than normal, and this got the soybean plants off to a very fast start. Warm nights are conducive to early flowering, and this was especially notable in 2018. In the early-planted crop, first flowers appeared in early June, well before the longest day of the year, and unlike the interruption of flowering that often takes place under normal night temperatures for about a week before and after the longest day, flowering was early and continuous in 2018. As a result, nearly half of the Illinois soybean crop was flowering by July 1. The warm May probably affected the yield response to planting date as well; with warm temperatures, early-planted soybeans developed as fast as late-planted ones, and this widened the developmental gap between the different plantings.

Planted on April 26, the earliest variety reached first flower on June 9 and matured on August 28, compared to June 15 and September 17 for the latest-maturing variety; this 14-day difference in flowering to maturity translated into an 11-bushel yield advantage for the longer-maturing variety. When planted on May 24, the earlier and later varieties flowered on June 15 and July 2, and matured on September 12 and September 25, respectively. So when planted late, both varieties flowered early in their life cycles, both spent about the same number of days from flowering to maturity, and they ended up yielding about the same. While in this case it’s accurate to say that the later-maturing variety benefitted more from early planting, that’s only because the early-maturing one was physiologically less able to use the longer growing period allowed by early planting to produce high yield.

Seed quality as measured by the standard warm germination results is probably good in most cases this year, but there were enough issues related mostly to harvest time weather last fall that vigor—the ability to produce good stands under stressful soil conditions—may be lower than in some previous years. Vigor is commonly measured by the “cold test”, which consists of keeping the seed in soil at 50 degrees for several days followed by a standard warm germination test. Cold test results can be somewhat hard to interpret, but most of the time, actual emergence is higher than the cold test score. Many companies take cold scores and might be willing to share them for seed lots this year.

Although promoting low soybean seeding rate for high yields seems to have cooled a little, some still contend that planting 100,000 seeds per acre is enough. We have conducted small-plot seeding rate trials each of the past four years at six or seven sites per year around Illinois. We plant rates of 50, 100, 150, and 200 thousand seeds in replicated trials, and report yields by actual plant stands. Figure 3 below shows the results from the 2018 trials. Plant stands as percentage of dropped seeds were high in 2018, and yields were high to very high. Optimum stands ranged from 86,000 to 201,000 plants per acre. 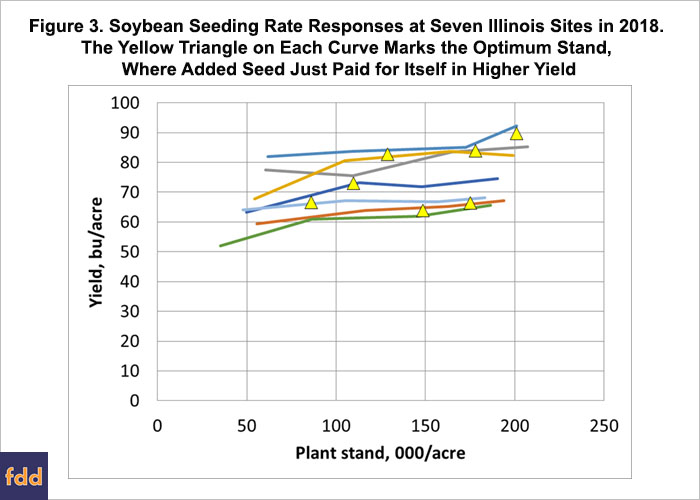 The wide ranges of optimum plant stands and yields in 2018 were not unusual; across all 27 trials over the past four years, optimum stands ranged from 50,000 to 201,000, and yields at optimum stands from 53 to 90 bushels per acre, with no discernible correlation between yields and stands (Figure 4). How do we deal with such variability across sites? We certainly can’t plant enough seeds to make sure we never have too few plants—that would take planting more than 200,000 seeds per acre. With no correlation between yield and seeding rate, we also can’t reasonably adjust seeding rate by expected yield, and we can’t know actual yield. A reasonable approach is to cover most cases by planting to produce stands of about 120,000 plants per acre, which is close to the stand needed to maximize return to seed (gross return minus seed cost) in the majority of responses. 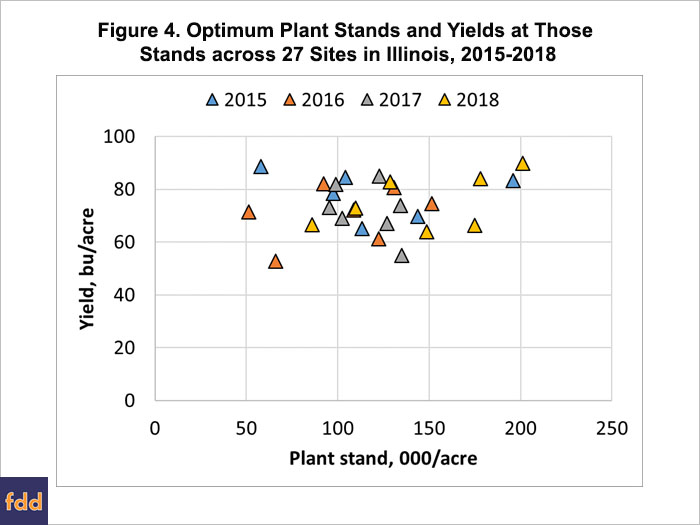 How many seeds do we plant if we want to end up with 120,000 plants? Over the trials reported here, plant stand as a percentage of dropped seeds averaged in the low 80s for the first three years, and was close to 100% in 2018. We normally divide the desired stand by the warm germination (percentage expressed as a fraction, as in 0.95), and then by a percentage that, based on soil conditions and seed placement, we reasonable expect to produce a stand. Planting seed with high germination percentage into good soil conditions with a planter that places seed well, it may be reasonable to expect 80% establishment. If we want 120,000 plants, that would mean planting 120,000 ÷ 0.80 = 150,000.

Should we raise seeding rates to avoid having to replant if we’re planting into cool soils the last week of April? We may want to raise them a little if the cold test percentage is marginal. But the most common cause of having to replant is heavy rains after planting that leaves seeds without oxygen in the soil, causing seed death and very low stands. In few cases like this does raising the seeding rate increase the stand enough to avoid replanting.

On soils heavier than loam in texture, it is unlikely that adding nitrogen fertilizer at planting, or during the season, will increase yields. On lighter soils, adding urea at planting might increase early growth and yields, but the chances of this happening are not high. There has been some data from Iowa and Indiana suggesting that adding sulfur might help soybean yields, especially (but not only) in lighter soils. As with N, we don’t have good guidelines on when S might be needed, but it is clear that the need to supply S as fertilizer (ammonium sulfate, gypsum, ammonium thiosulfate, elemental S) is not universal, and in many soils, adding S is unlikely to increase soybean yields. Ammonium sulfate broadcast at planting at a rate of about 20 lb. of S (83 lb AS) can supply both N and S, but is not inexpensive. Keep in mind that most of the outstanding soybean yields in 2018 were produced without adding N, S, or other products not known to be needed routinely for high soybean yields.

A version of this was posted on March 11, 2019 at the University of Illinois Bulletin at http://bulletin.ipm.illinois.edu/?p=4491