Part 1 opened this series by providing some initial background information and a quick overview of federal budget basics (farmdoc daily, November 29, 2018).  This article continues the budget discussion with a review of revenue and spending data as reported by the Congressional Budget Office.  Where spending exceeds revenue in any year, the federal government runs a deficit; each year of deficit adds to the federal debt.  This article reviews specific categories of both revenues and spending.

Beginning with the big picture from the Congressional Budget Office (CBO), which reports regularly on the budget outlook.  On March 6, 2019, CBO provided an updated outlook for the budget through 2029; the graphic below is from that presentation (CBO Budget Outlook, March 6, 2019).  CBO’s illustration is a historical perspective of the federal debt held by the public as a percentage of Gross Domestic Product (GDP), including projections well into the future. 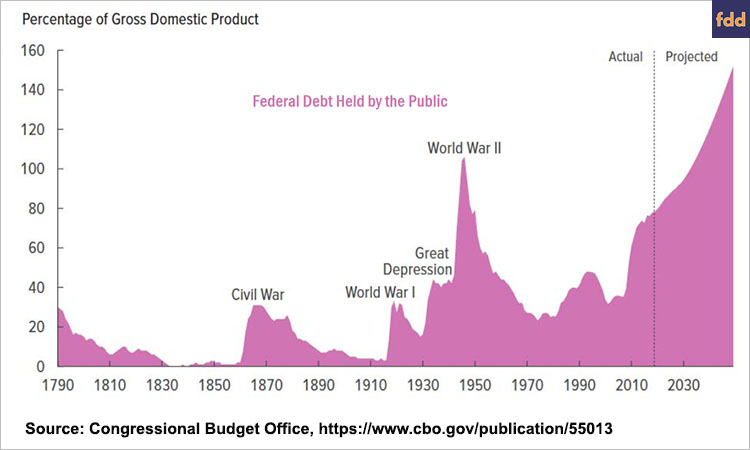 CBO’s historical perspective on the federal debt provides clear illustration for the political fixation on this topic.  According to CBO projections, the federal debt will reach levels that are unprecedented, exceeding debt levels experienced during World War II.  Taking CBO’s federal debt chart as the starting point, the following discussion provides a breakdown of the building blocks of the debt.

As discussed in Part 1 of this series, the federal debt is the product of yearly deficits that are the result of federal expenditures exceeding federal revenues (farmdoc daily, November 29, 2018).  Figure 1 illustrates the major sources of federal revenues as reported by CBO, covering historic revenues from 1969 and the projections through 2029 (CBO, Historical Budget Data, January 2019; CBO, 10-Year Projections, January 2019).  According to CBO data, the largest sources of federal revenues are from individual income taxes (green), which have grown from $87 billion in 1969 to $1.7 trillion by 2018.  CBO’s projections are for income taxes to average $2.3 trillion from 2019 to 2029.  The next highest source of revenue is from payroll taxes (blue), which have grown from $39 billion in 1969 to $1.2 trillion in 2018; CBO projects average payroll taxes of $1.5 trillion in the next ten years.  The other sources of revenue (black) consist of excise taxes, estate and gift taxes, customs duties and miscellaneous receipts.  Corporate income taxes (red) constitute a smaller share of revenue, growing from $36.7 billion in 1969 to $205 billion in 2018; CBO projects an average of $364 billion from 2019 to 2029. 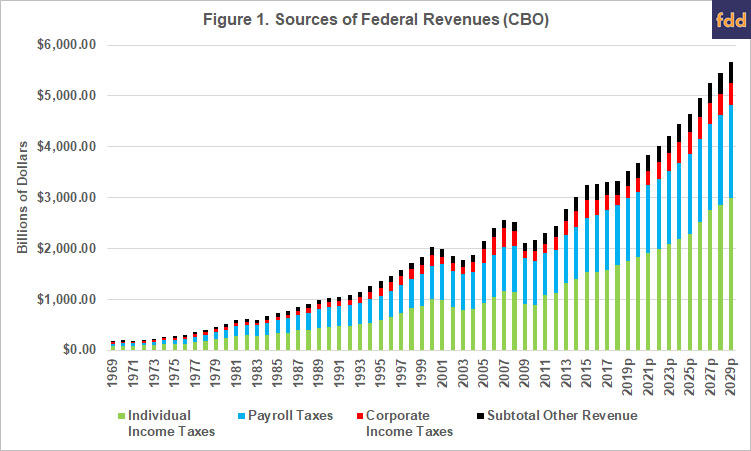 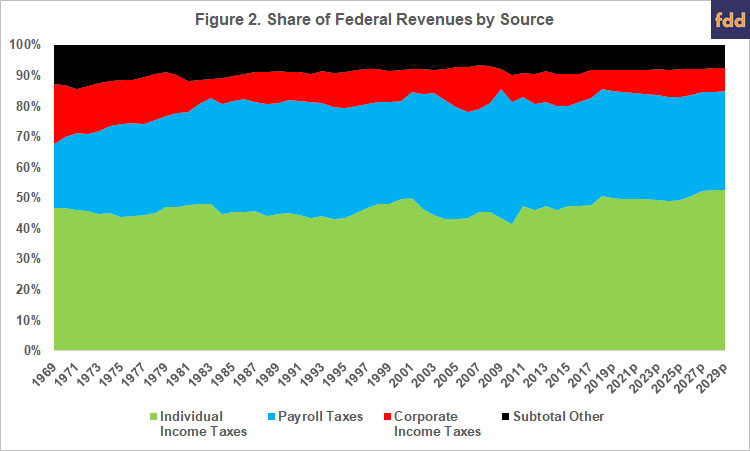 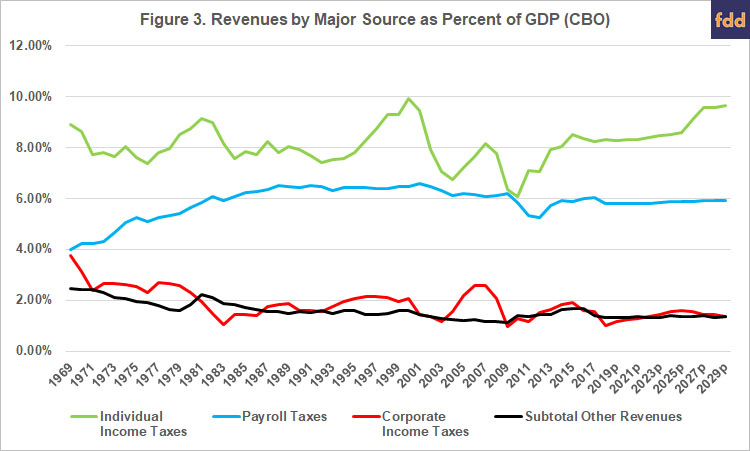 The other part of the deficit is federal spending.  Figure 4 illustrates CBO’s reported historic data by major category of spending and CBO’s projections for 2019 through 2029.  The category “Other Mandatory Programs (less offsetting receipts)” in Figure 4 (blue bars) consists of income security programs, federal civilian and military retirement, veteran’s programs and all other mandatory programs, minus the offsetting receipts for some of these mandatory programs.  This is the category that would include entitlement spending for farm programs, crop insurance, conservation and the Supplemental Nutrition Assistance Program (SNAP) in the farm bill.  The discretionary spending accounts are appropriated each year (as compared to mandatory spending in entitlement programs) and are split between defense and nondefense programs.  The third subset is the net interest on the federal debt (black). 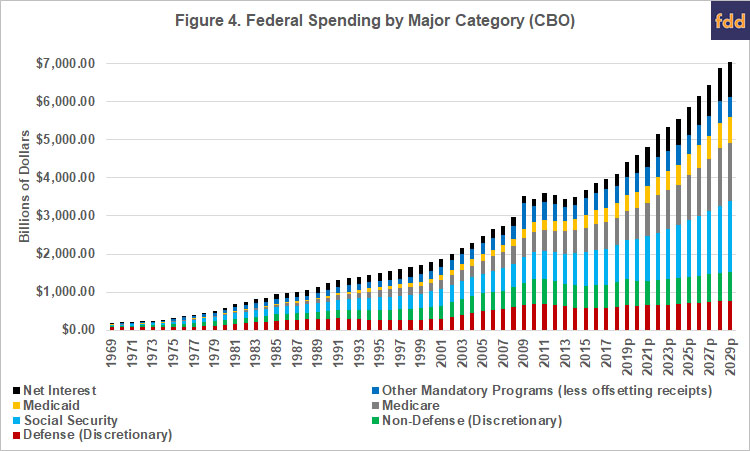 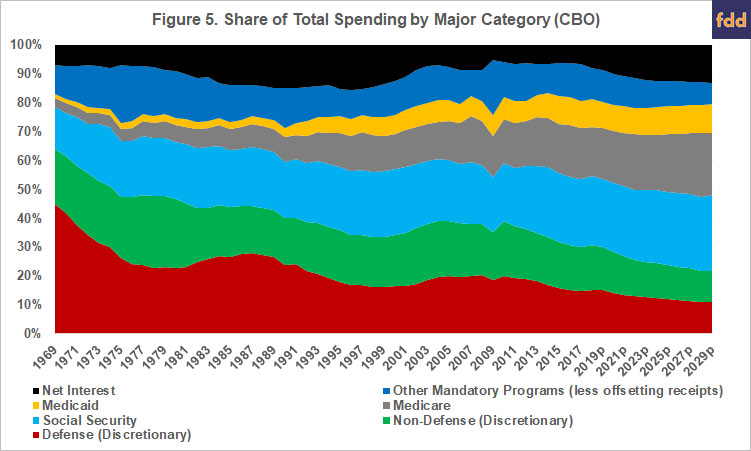 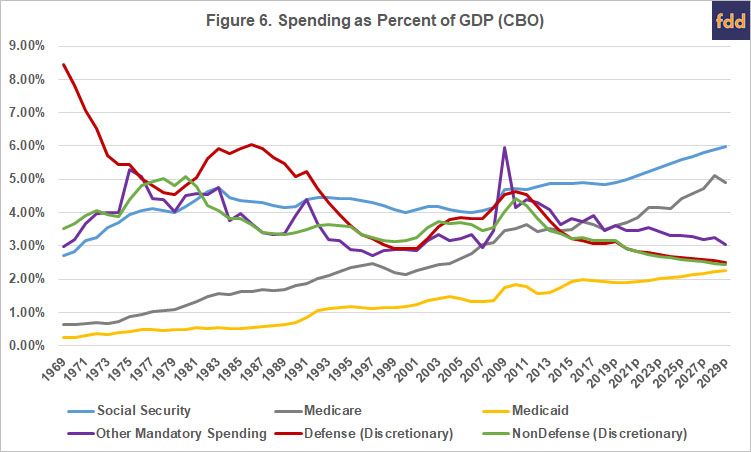 The impacts of the Great Recession on spending are another notable data point in Figure 6; spiking to nearly 6% of GDP in 2009 from 2.9% in 2007.  That corresponds to an increase in outlays that went from $242 billion in 2007 to more than $660 billion in 2009.  Spending on these mandatory programs has decreased steadily since 2009, falling to over $440 billion in 2018 or 3.47% of GDP.  In general, these numbers demonstrate the counter-cyclical nature of the mandatory entitlement programs such as SNAP.

To conclude part 2 of this series, Figure 7 updates the CBO graphic in the background section.  Figure 7 illustrates federal debt held by the public (red), federal outlays (navy line) revenues (green line) all as a percentage of GDP from 1969 to projections for 2029.  To better illustrate the degree of changes over time, federal debt is shown on a separate axis (right-hand) from 0% to 100% while revenues and outlays using the left-hand axis from 10% to 25%. 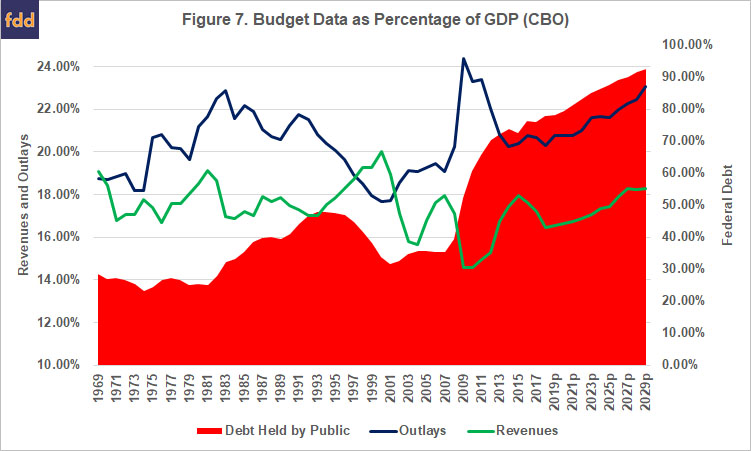 According to CBO, the nation ran a $3 billion surplus in 1969 and the federal debt was nearly $280 billion.  At that time, the debt was 28% of GDP on revenues that were 19% of GDP and spending that was 18.7% of GDP.  In 2018, CBO reported that the federal debt was 77.8% of GDP; spending was 20% of GDP but revenues were only 16.5% producing a deficit of 3.85% of GDP.  As noted earlier, Congress initiated efforts at comprehensive budget discipline in 1974 when revenues were 17.75% of GDP, outlays were 18% and the deficit was -0.4% of GDP.  In 1974, the federal debt was down to 23% of GDP.  These numbers add further to the federal budget picture but also raise additional questions.  Along the revenue and outlay lines are the policy decisions in Congress with respect to tax and spending policies; the extent there are answers to the questions raised they will be found there.  Future articles in this series will seek to explore these issues further.