A World Trade Organization (WTO) dispute panel circulated its report on April 18, 2019 concerning U.S. claims that China’s administration of tariff rate quotas (TRQs) for corn, rice and wheat has been inconsistent with its legal obligations (WTO 2019). This article summarizes the dispute arguments and panel findings. A key conclusion of the panel is that China has failed to ensure that administration of its TRQs would not inhibit the filling of each TRQ, and the panel recommended that China be requested to bring its measures into conformity with its obligations. This is the second time in 2019 that the U.S. has successfully challenged China’s agricultural support and trade measures at the WTO. An earlier panel report, adopted by the WTO on April 26, 2019, found that China’s domestic support for wheat and rice had exceeded its WTO commitments during 2012-2015 (farmdoc daily March 6, 2019) and requires China to bring its domestic support into compliance.

A TRQ is a two-tiered import tariff system. The first tier has a lower tariff rate that applies up to a specified quantity of in-quota imports. The second tier has a higher tariff rate that applies to imports that are in excess of the quota quantity. TRQs are designed to allow at least some market access for commodities where the second-tier tariff provides high protection. Forty countries have 1,128 agricultural WTO TRQs.

In acceding to the WTO in 2001, China agreed to allow global access for imports of certain quantities of corn, rice, and wheat at a low 1% in-quota tariff.  Maximum annual first-tier TRQ imports by China from all sources are 283 million bushels of corn, 117 million hundredweight of rice, and 354 million bushels of wheat. These maximums are approximately 3%, 4%, and 7% of China’s recent production of corn, rice, and wheat, respectively. Out-of-quota imports above these limits face a tariff of 65%.

China’s domestic prices of corn, rice and wheat have been well above world prices since 2013. High domestic prices create an incentive for in-quota TRQ imports to take advantage of lower world prices. However, China’s imports of these crops have remained far below its TRQ in-quota levels, motivating the U.S. complaint (Gale 2017).

China’s accession agreement includes two unique additional provisions concerning its TRQs. First, China’s obligations regarding TRQ administration are more specific than the obligations of other WTO members. China committed to administering its TRQs “on a transparent, predictable, uniform, fair and non-discriminatory basis using clearly specified timeframes, administrative procedures and requirements that would provide effective import opportunities; that would reflect consumer preferences and end-user demand; and that would not inhibit the filling of each TRQ” (WTO 2001, paragraph 116).

China’s alleged noncompliance with its obligations on TRQ administration is the issue in the dispute. The panel did not require the U.S. to quantify numerically the effects of China’s administration on under-filling of its TRQs and no numerical assessments are evaluated in the panel report. In making its evaluations, the panel considered the legal instruments and other documents by which China established and administered its TRQs and the administrative procedures and practices followed by its National Development and Reform Commission, examining in particular the legal instruments and practices as applied in 2017.

For exporters to China’s grain markets, the fill rates of the TRQs are the bottom line in terms of market access. Thus, we focus on the panel findings concerning two aspects of TRQ administration on which the U.S. prevailed in its claim that China failed to ensure that filling of each TRQ was not inhibited.

The panel found first that China’s legal instruments and other documents failed to explain how it allocated the COFCO and non-state trading enterprise portions of TRQs and did not provide the possibility of applying for one portion or the other. The uncertainty this created was found inconsistent with China’s commitments to transparency, predictability and clearly specified administrative procedures. However, the panel did not conclude that this failure inhibited China from filling its TRQs.

The panel then considered China’s administrative practice. Among its various findings the panel determined that allocating the entire state trading enterprise portion of the TRQs to COFCO and not requiring its unused allocations to be returned for reallocation “precludes non-STE [non-State Trading Enterprises] applicants from applying for and receiving COFCO’s unused TRQ amounts during the reallocation process” (WTO 2019, paragraph 7.112). The panel thus concluded that China’s administrative practice violated its obligation to administer TRQs for corn, rice and wheat in a manner that would not inhibit the filling of each TRQ.

China requires that corn and wheat imported under TRQs be processed and used at the importer’s own production plant. The panel concurred with the U.S. that these usage requirements precluded firms from using TRQ imports in the most efficient and thus least cost manner for their commercial needs in all circumstances. It agreed that absent such requirements, firms would apply for larger TRQ allocations, and, thus, the usage requirements inhibited the filling of China’s corn and wheat TRQs.

China usage requirement for rice is different. Sales of rice imported under the TRQ are required to be organized in the name of the importing enterprise. The panel rejected the U.S. argument that this usage requirement violated China’s obligation to ensure that its TRQ administration would not inhibit filling of China’s rice TRQ.

The U.S. asserted that other aspects of China’s TRQ administration also violated one or more of its obligations. The panel ruled against the U.S. claim that China’s failure to provide public notices of allocated, returned and reallocated TRQs violated China’s obligations of transparency, predictability and ensuring that TRQ administration would not inhibit filling of each TRQ. The U.S. arguments on the remaining administrative aspects did not go to the point of claiming that they violated China’s obligation to ensure the filling of each TRQ was not inhibited. However, China’s violation of other independent but inter-related commitments contributed to the panel’s overall conclusion that administration of the corn, rice and wheat TRQs was inconsistent “as a whole” with China’s obligations.

A summary of the U.S. assertions and panel conclusions is presented in Table 1, showing that the panel concurred with the U.S. on most of its complaints. If neither the U.S. nor China appeals the panel report, the WTO will adopt it no later than June 18, 2019. 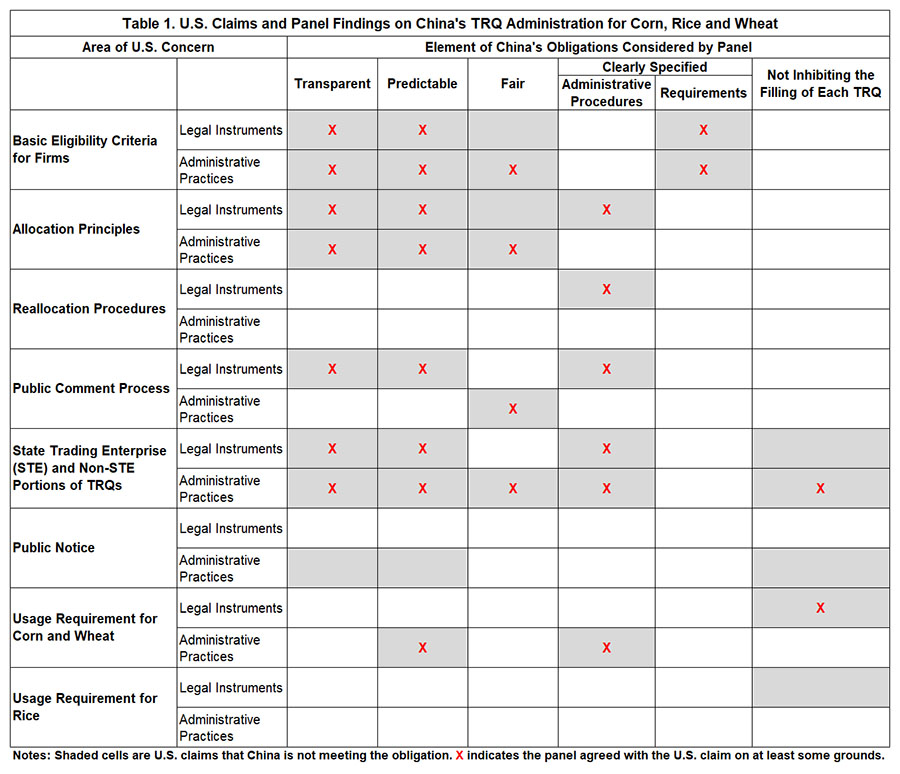 Context of the Dispute Outcome

As noted above, the panel did not require the U.S. to quantify the effects of China’s TRQ administration on TRQ fill rates. However, China’s imports of corn, rice and wheat during 2013-2017 demonstrate the potential importance of the panel conclusions. During these recent years, China’s high domestic prices created incentives for in-quota TRQ imports. As discussed in-depth by Grant, Xie and Boys (2019), based on firm-level data there appear to be substantial differences in the TRQ fill rates between the COFCO and non-state trading enterprise portions of the TRQs during these five years.

Several other recent studies and projections are consistent with this conclusion. Chen, Villoria and Xia (2018) estimate that, if TRQ administrative obstacles were removed, the total fill rates in in 2017 would have been 22 percentage points higher than observed for corn, 11 percentage point higher for rice, and 34 percentage points higher for wheat. Kimura and Gay (2019) find that China’s corn and wheat imports would fill the TRQs in a scenario where China’s support programs did not encourage production. Last, projections at China’s 2019 Agricultural Outlook Conference also suggest imports will increase although remaining below the maximum in-quota TRQ levels.