The lateness of planting the 2019 U.S. soybean crop has rightfully been getting a lot of attention.  We have highlighted this issue and its implications for acreage, yield, and prices in two previous farmdoc daily articles (May 9, 2019; June 6, 2019).  The measure of late planting used in these articles: i) reflects only soybean acres planted fairly late in the planting window; ii) is computed for the entire U.S., and iii) starts in 1980.   The purpose of this article is to introduce an alternative measure of the timeliness of planting the 2019 soybean crop that can be computed over a longer time period and at the individual state level for Illinois, Indiana, and Iowa.  This will provide additional perspective on the magnitude of late soybean planting in 2019.  The analysis parallels that of corn in the farmdoc daily article of June 12, 2019.

The measure of late planting for soybeans used in previous farmdoc daily articles (e.g., June 6, 2019) is based on the percentage of soybeans planted late in the U.S. over 1980-2019 based on a June 5 cutoff from 1980 through 1985, and a May 30 cutoff date from 1986-1999, and a May 25 cutoff from 2000-2019.  The change in cutoff dates in the mid-1980s and late May in 2000 reflects recommendations for earlier planting that appeared around that time.  This specification emphasizes soybean acres planted well past the optimum planting window as historically defined by agronomic planting date field trials.  Figure 1 presents this measure and it shows that, on average, late planting was 39.2 percent.  The average level of late planting for soybeans, 39.2 percent, is much higher than for corn, 17.7 percent, which was reported in the farmdoc daily article of June 12, 2019.  At least half of this difference can be attributed to double-crop planting of soybeans.  Late-planted soybean acreage in 2019 came in at the highest total since 1980 with 72 percent remaining to be planted as of March 30.   While 2019 was the highest in the sample period, note that late planting was almost as high in two previous years (1990 and 1995). 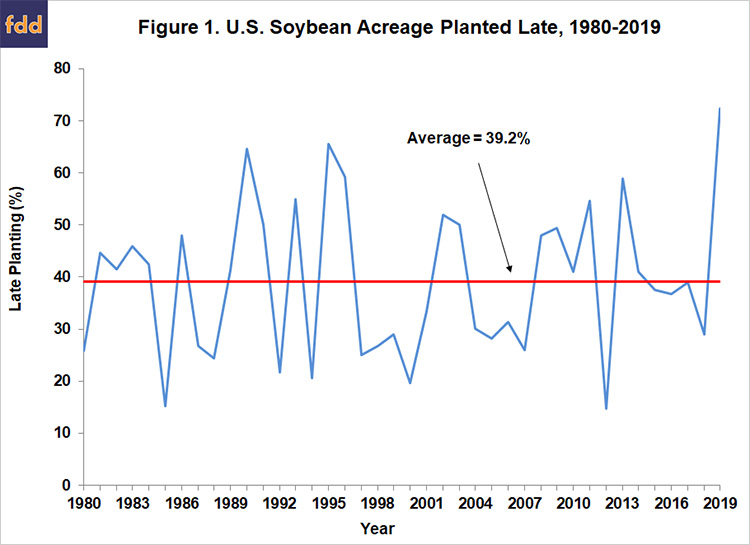 We compute the number of days before or after May 1st that 50 percent soybean planting progress is reached in Illinois, Indiana, and Iowa over 1960 through 2019.  These three states contained 30 percent of the soybean acreage planted in the U.S. during 2018 and should be representative of planting rates over much of the Corn Belt.  Figures 2-4 present this measure for each state, respectively, with positive observations on the vertical axis indicating the number of days after May 1st that 50 percent planting progress is reached and negative observations indicating the number of days before May 1st.  Estimated linear trend lines over 1960-2019 are also included in each figure. 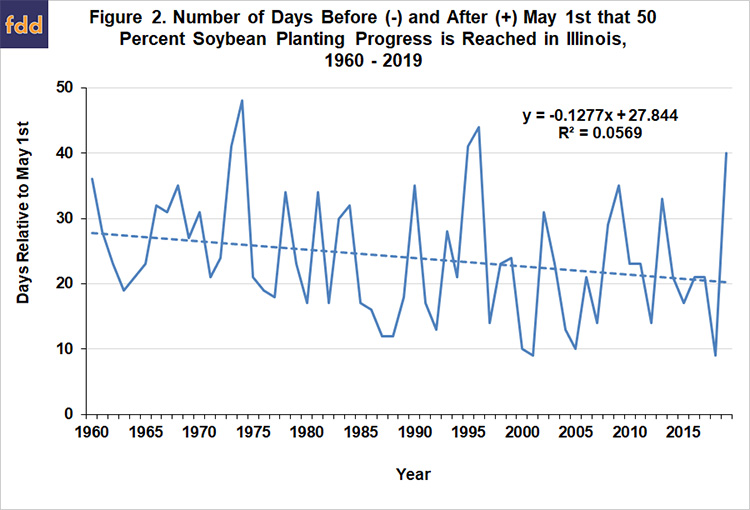 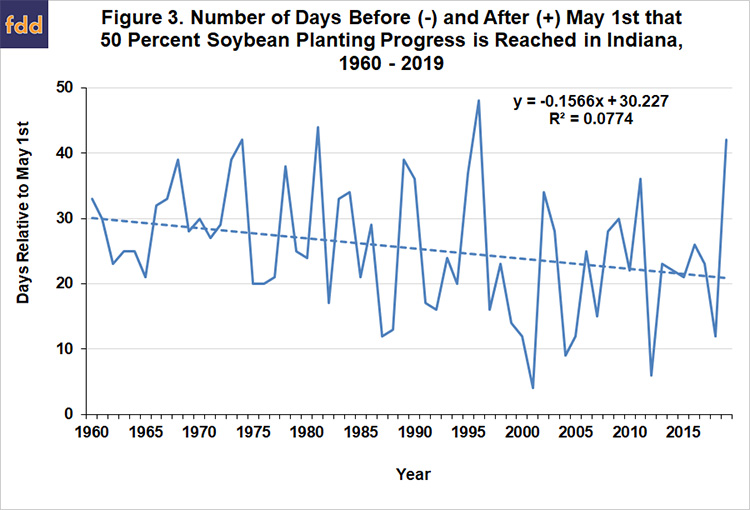 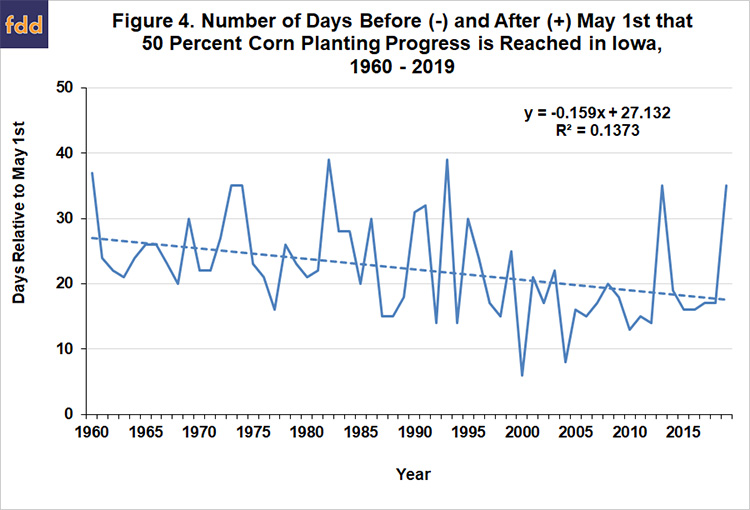 While Figures 2-4 indicate there has been substantial annual variation in planting progress in each state from year-to-year, a clear trend towards earlier planting is evident.  Since 1960, the trend lines indicates that the 50 percent completion date moved from about May 30th to May 20th for Illinois and Indiana, and from about May 25th to May 15th for Iowa.  In general, the 50 percent progress date in these three states is now about 10 days earlier than in 1960.  While this is clearly a move towards significantly earlier planting for soybeans, it is not as large as the shift of two to three weeks earlier observed for corn since 1960 (farmdoc daily, June 12, 2019).  Another observation is noteworthy in Figures 2-4.  Specifically, the trend towards earlier planting in soybeans has been surprisingly steady for the last six decades.  This contrasts with corn, where the biggest moves toward earlier planting dates occurred in the 1960s and 1970s and only modest moves toward earlier planting were observed since the mid-1980s.

It is common knowledge that the 2019 U.S. soybean crop has been planted late due an exceptionally wet spring.  We provide additional perspective on the magnitude of late planting by computing the number of days before or after May 1st that 50 percent soybean planting progress is reached in Illinois, Indiana, and Iowa over 1960 through 2019.  Since 1960, the trend in the 50 percent completion date moved from about May 30th to May 20th for Illinois and Indiana, and from about May 25th to May 15th for Iowa.  In general, the 50 percent progress date in these three states is now about 10 days earlier than in 1960.  The analysis also shows that soybean planting in 2019 did not reach 50 percent completion until June 10th in Illinois, June 12th in Indiana, and June 5th in Iowa.  Relative to trend, these were the first or second latest dates for reaching 50 percent completion in the last 60 years.  So, by any measure, soybean planting in 2019 was extraordinarily late.

Irwin, S. and T. Hubbs. "Another Look at Late Planting of the 2019 Corn Crop." farmdoc daily (9):108, Department of Agricultural and Consumer Economics, University of Illinois at Urbana-Champaign, June 12, 2019.