One of the most pressing questions as planting continues into June after a very wet May is whether or not the high rainfall amounts over the past month have affected the amount of nitrogen fertilizer needed for the corn crop this year. This is a complicated question, related both to concern about how much early-applied N might be lost and to decreased yield potential from late planting that might lower the need for N. The recent price increase in corn also provides an incentive to make sure the crop gets enough N.

Dr. John Sawyer of Iowa State University posted an article this week in which he described their finding that the crop is likely to respond to additional N if total rainfall from April through June exceeds 16 inches in most of Iowa, and if March-June rainfall exceeds 18 inches in southeastern Iowa. The MRTN rate from the N rate calculator in Iowa is 140 lb N per acre, less than the 180 lb N or so in southern and central Illinois, and 170 in northern Illinois, for corn following soybean.

It’s not clear how well this way of predicting the need for additional N applies to corn in Illinois, especially with so much of the crop planted late this year. The on-farm N responses produced by Dan Schaefer of IFCA (with funding from NREC) may give us a clue about this. The following table shows percentages of central and northern Illinois (where most of the trials included here were located) that received more than 16 inches of rain between April and June each of the last four years, and percentages of the on-farm N trials that showed the need for more than 180 lb N. 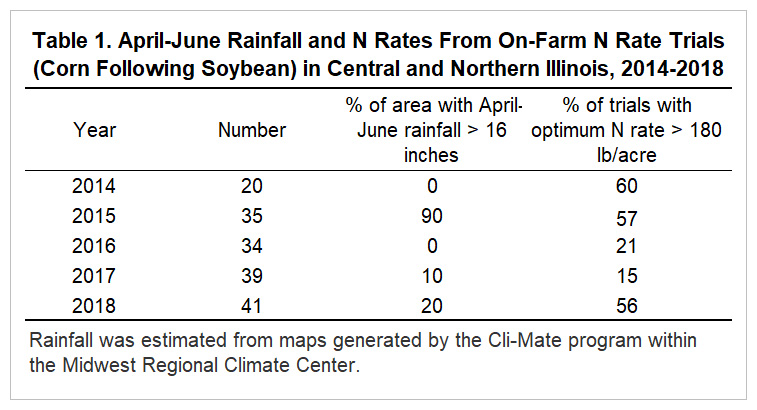 While these numbers show that higher rainfall during the spring is associated with the need for more N, the fact that the numbers in 2014 and 2018 don’t follow this trend indicates that this is complicated. For one thing, when it rains might be as important as how much it rains: April and May rainfall were at or below normal in 2014 and most other years (2017 was an exception), while June rainfall was well above normal in 2014, 2015 and, except in western Illinois, in 2018—all years with more responses to higher amounts of N. Yield levels were also higher in 2018 than in other years, which likely increased N demand. Because June rainfall isn’t very predictable at the beginning of June, we will probably need to wait into at least the middle of this month to assess the need for more N based on rainfall amounts.

When the N was, or will be, applied is a factor in trying to pin down N rate this year. It’s not a stretch to guess that some of the N applied last fall or early this spring has moved (as nitrate) below the rooting zone, and some of that is likely to have left the field through tiles. In places where water has stood, some has also been lost to denitrification. So in well-tiled fields in the “wet triangle”—from about Quincy to Chicago then west to Carroll County—it is likely that some early-applied N has been lost to this year’s crop, and may need to be replaced. If the crop got (or will get) some N at planting in that area, that will probably maintain yield potential until we can better guess at final amounts of N.

As I wrote in the Bulletin on May 31, when and if rainfall pauses long enough to allow soils dry to dry out will be a critical factor is how soon the crop gets access to N already in the soil. Corn planted on May 16 here (with N applied as UAN before planting) reached stage V4 on June 4 (at 403 GDD after planting, very close to the 395 GDD to V4 given in the Illinois Agronomy Handbook, Chapter 2), and is beginning to take on the healthy, green color we’ve been hoping for. So as roots grow out into the soil, they’re bringing N into the plant with water. If there isn’t much rain over the next week, we can expect a rapid improvement in the color of the crop. That’s helped along by good mineralization rates, and by warm, dry weather to stop the downward movement of N.

Where N was applied in May followed by wet weather, and the crop has been planted only in the last week, will that N be enough N? We should wait to see: if we’re in a period of moderating rainfall now, and the crop develops good color by the time it has 2 or 3 leaves, we may not need more. If it turns wet again and the crop stays yellow or pale green for a week or more after emergence, we might consider that as a sign that the crop isn’t getting the N that it needs. If it dries out (again) and the crop greens up, the roots are likely back to taking up N again, and the need for more N will be averted.

Some have considered using a soil test for nitrate or perhaps a tissue test to see if there’s enough N for the crop. Tissue tests can be expected change quickly over time this soon after planting, and they are probably no better than simply observing the crop to see how green it is. Soil N testing that we’ve done (funded by NREC) over the past four years shows that, following application of 200 lb N in the fall (spring-applied ammonia is similar), nitrate levels in the top foot of soil were about 30 ppm in mid-May (stage VE to V2); about 30 ppm in early June (stage V5-V6); and a little less than 20 ppm by mid-June (stage V8-V10) averaged across three sites and four years. In all cases this amount of N was enough for maximum corn yield, so we can’t say with precision what the minimum soil N amount should be.

Plants take up less than 15 lb of N per acre by stage V5-V6, but take up as much as 75 or 80 lb per acre between stages V5-V6 and V10. So it makes sense that soil N levels decline as plants take up N; 1 ppm N in the top foot of soil is roughly 4 lb N per acre. So if soil N drops by 10 ppm (from 30 to 20) as the crop takes up 75 lb of N between V5 and V10, only about half of the N taken up is accounted for by the (net) drop in soil N; the rest comes from mineralization. Because there are these two sources of N, as well as some N perhaps moving up from deeper in the soil as plants take up water, the amount of nitrate we find in the soil during vegetative growth is not a very good indicator of the N supply to the plant, especially in June when soils are warm.

Growing plants will often indicate soil N availability better than does the amount of N in the soil. So we can watch the crop to see when it begins to take on a better green color. One difficulty with this is that it can, during early growth, be hard to tell how dark green the plant should be: we can’t very well know if a pale color means that there’s N in the soil that’s not available to the plant or if there simply isn’t enough N. Those doing canopy color sensing address this problem by putting “high-N reference strips” at one or more places in a field, with the idea that crop color in that strip can only be limited by factors not related to N level. Canopy color in the rest of the field is then referenced to that in the high-N strip to give a relative value.

I’ll suggest here using this approach in fields recently planted, especially in fields where it’s not clear if enough N remains available to keep the crop green and growing well. A simple way to do this is to drop some urea alongside or on top of the row in a small area in a field, then to watch the crop there relative to the crop that doesn’t have the extra N, to see if there is a difference in color. What rate we use for this isn’t critical, but a half-cup of urea (46-0-0) applied to 20 ft. of row is roughly 90 lb of N per acre—that should be plenty. To do this, find a place past the endrows (or a few rows into the side of the field) that will be easy to see later, and dribble a half cup of urea down 20 ft (8 steps is close enough) of each of 4 rows next to each other, to form a little “high-N patch” (HNP) for comparison. Plant a flag in the center of the patch, or flags on the corners. If a field has both light- and dark-colored soils, it might be interesting to place an HNP in each soil.

Then, simply look at the HNP every few days, especially a day or two after rain moves the urea into the soil, to see if the corn there turns greener than the corn outside the patch. If it doesn’t, then the crop is likely not limited by the amount of N available to it. If it does turn darker green, then continue to watch it for a week or so longer. If the rest of the crop greens up so that the HNP is no longer visible, then no more N should be needed, providing that enough N was applied.

But if the corn in the HNP stays greener than corn outside for a week or more, that is a signal that applying more N would likely improve yield prospects. How much more N should be used in a supplemental application? For the trials in the table above that showed the need for more than 180 lb N, the average amount by which they exceeded 180 lb N was between 25 and 35 lb N except in 2015, when it was 51 lb N per acre. So unless June turns out to be wetter than normal, 30 to 40 lb of additional N should be enough. Apply in such a way that gets N to the plants quickly—dropping solution N (UAN) near the row is probably the best way to do this. Broadcast urea would be next-best, and might be better if it can be applied by air when field conditions don’t allow ground applications.

Where corn is planted but most or all of the N still needs to be applied, the MRTN rate, applied as UAN, urea, ammonia, or a combination should be enough N for the crop, unless June ends up being very wet. A lot of rain in June often causes root damage, and that plus the lack of soil oxygen under very wet (including flooded) soils lowers the ability of the roots to take up N. Because the crop looks deficient whether there’s not enough N or the roots can’t take it up, it can be difficult to know whether adding more N will boost yields. We’ll wait to see what June brings.

A final note: now that we have a crop that’s mostly been planted late and into less-than-ideal soil conditions, it will be better if rainfall and temperatures during the rest of the 2019 growing season remain in normal ranges, and above-normal rainfall in July and August would be even better. There won’t be very many days this year between our wishing it would stop raining and our hoping that it starts again.