This is the first of 3 articles that discuss land use practices as reported in the 2017 US Census of Agriculture (see farmdoc daily, July 25 and August 1).  Cover crops is examined in this article.  Cover crops have attracted intense interest as a practice that may reduce negative impacts of farming on the environment.  Potential benefits noted by proponents include less soil erosion and reduced loss of nitrogen and other nutrients from the soil (Myers, Weber, and Tellatin, 2019). Despite the attention paid to cover crops over the last few years, acres planted to cover crops equaled only 3.9% of all US cropland in 2017.  Only 2 states (Maine and Maryland) averaged a 1 percentage point per year increase in cover crops as a share of cropland between 2012 and 2017.

Section 4 of the 2017 Census of Agriculture questionnaire addressed “Land Use Practices.”  One practices was the use of cover crops.  Respondents were specifically asked, “During 2017, considering the cropland acres on this operation, how many acres were planted to a cover crop? (Cover crops are planted primarily for managing soil fertility, soil quality, and controlling weeds, pests, and diseases.)  Exclude CRP.” (Appendix B, page B-30).  The wording of this question means a cover crop could be the only use of land during 2017 or it could have been planted after a harvested crop. 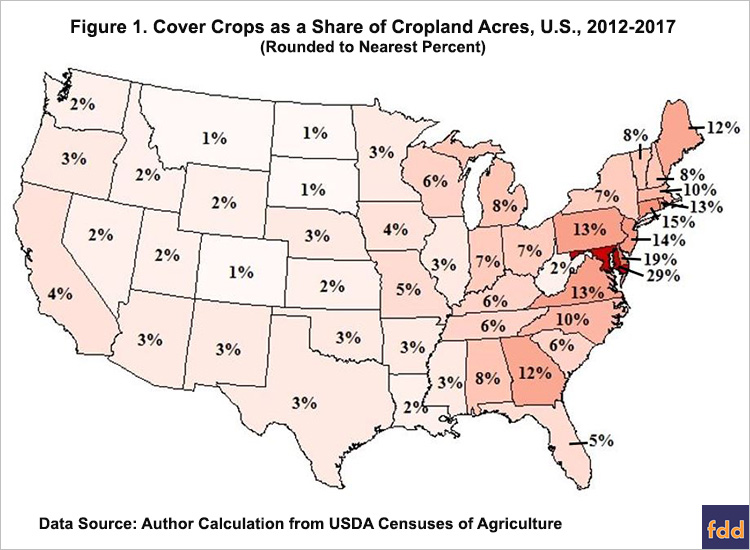 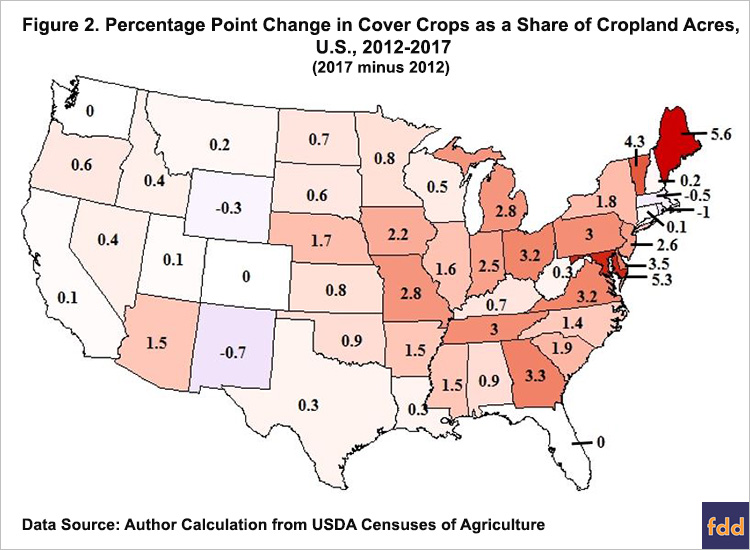 Zulauf, C. and B. Brown. “Tillage Practices, 2017 US Census of Agriculture.” farmdoc daily (9): 136.  Department of Agricultural and Consumer Economics, University of Illinois at Urbana-Champaign. July 25, 2019.

Zulauf, C. and B. Brown. “Use of Tile, 2017 US Census of Agriculture.” farmdoc daily (9): 141.  Department of Agricultural and Consumer Economics, University of Illinois at Urbana-Champaign. August 1, 2019.