This is the second article discussing land use practices as reported in the 2017 US Census of Agriculture (see farmdoc daily, July 24 and August 1). Tillage is examined in this article.  Tillage is of interest for several reasons, including its relationship to cost of production, yield, soil compaction, soil erosion, and water quality.  Tillage system used in 2017 varies substantially by state.  Main change from the 2012 Census was a shift from intensive to reduced tillage.  Use of no-till increased marginally.

The tillage practice question was asked in the context of cropland acres on the farm.  The following identifying phrases were used: “no-till practices,” “reduced (conservation) tillage, excluding no till practices,” and “intensive (conventional) tillage practices” (bolding as in question) (Appendix B, page B-30).  Instructions for the questionnaire noted, “Conservation tillage leaves 30 percent or more of the soil surface covered by crop residue after planting.  Conventional tillage has 100 percent of the soil surface mixed or inverted” (Appendix B, page B-51).

No till was used on 37% of US acres for which a tillage system was reported, up from 35% in the 2012 Census of Agriculture.  Variation by state is substantial, ranging from 79% for Tennessee to 6% for Minnesota (see Figure 1).  Variation for geographically contiguous states can also be large.  For example, the 6% share in Minnesota contrasts with 35% in Iowa and North Dakota and 52% in South Dakota.  Vermont had the largest increase in no-till between 2012 and 2107, +15.3 percentage points (pp) (see Figure 2).  Louisiana had the largest decline, -2.3 pp. 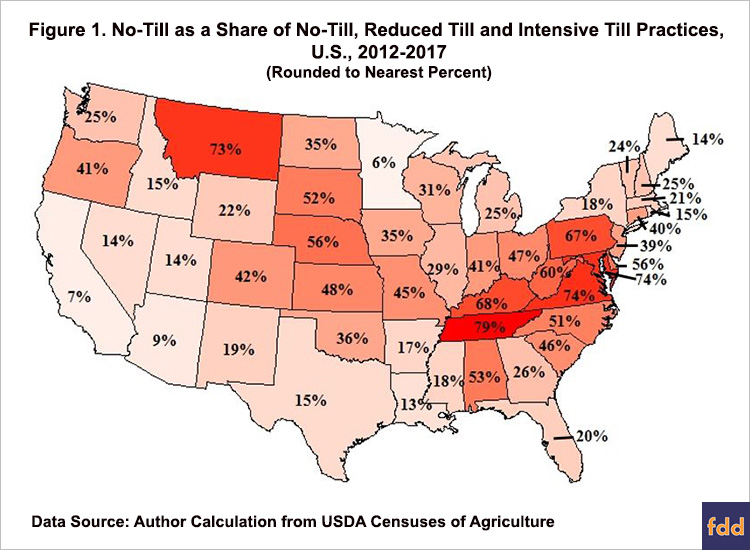 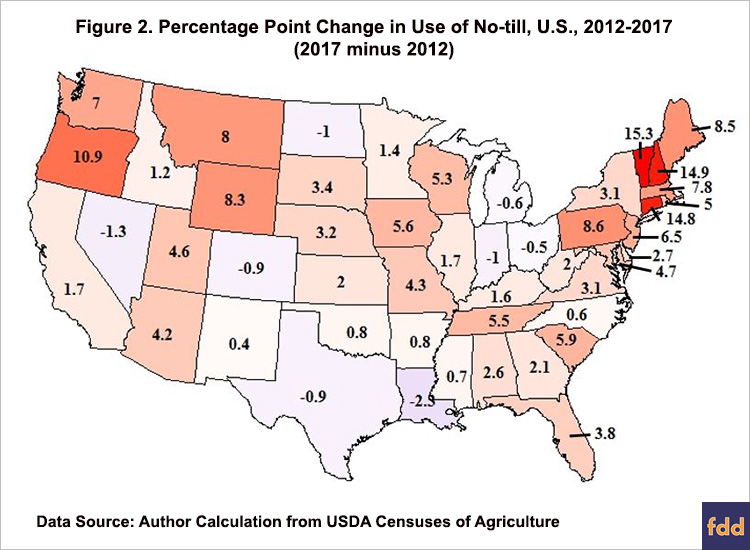 Reduced till, excluding no till, was used on 35% of US acres for which a tillage system was reported, up from 27% in 2012.  Compared with no-till, reduced till’s share varied less by state, ranging from 44% for Washington and Minnesota to 11% for Rhode Island (see Figure 3).  Reduced till’s share declined from 2012 for only 4 states, with the largest being -1.3 pp for Connecticut (see Figure 4).  Alaska had the largest increase, +24.9 pp. 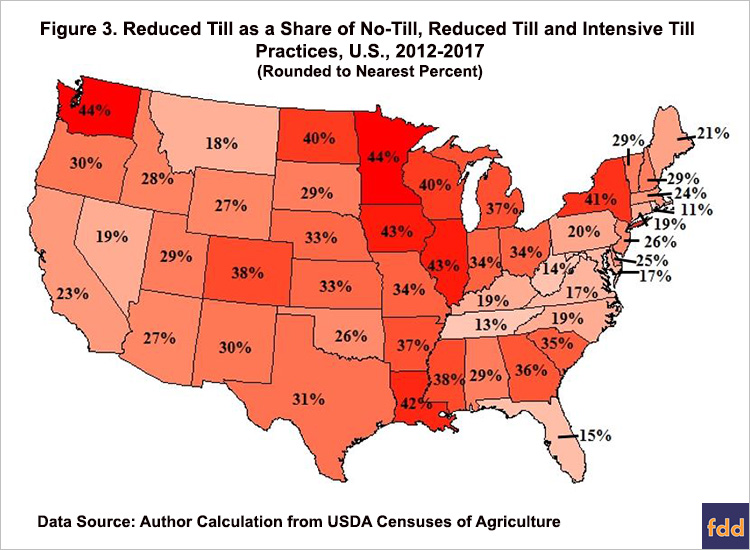 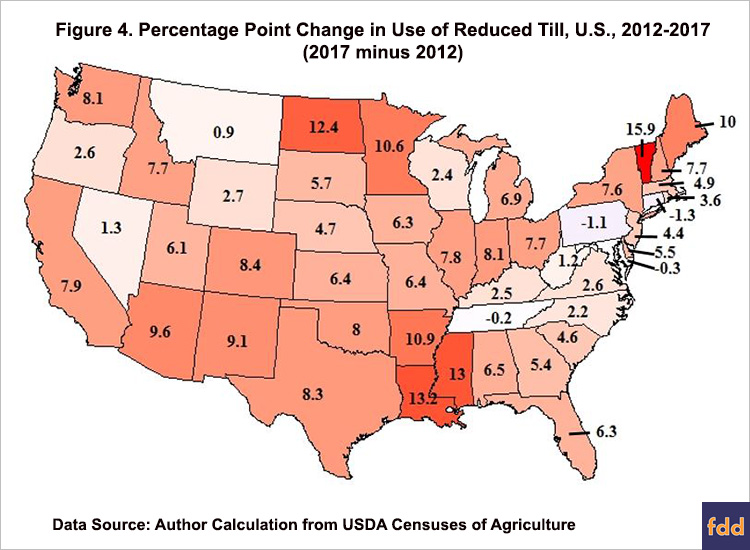 Intensive till was used on 28% of US acres for which a tillage system was reported, down from 38% in 2012.  Like no-till, intensive till’s share varied substantially by state, ranging from 75% for Rhode Island to 8% for Tennessee (see Figure 5).  Also similar to no-till, variation for contiguous states could be large.  For example, Rhode Island’s 75% share in 2017 compares with shares of 55% for Massachusetts and 41% for Connecticut.  Intensive till’s share was lower in 2017 than 2012 for 49 of the 50 states (see Figure 6).  Nevada’s share did not change.  Largest decline was -31.3 pp for Vermont. 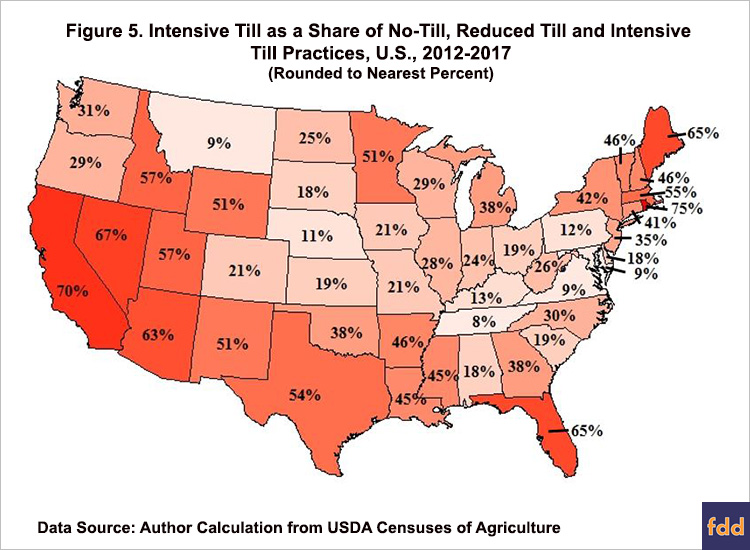 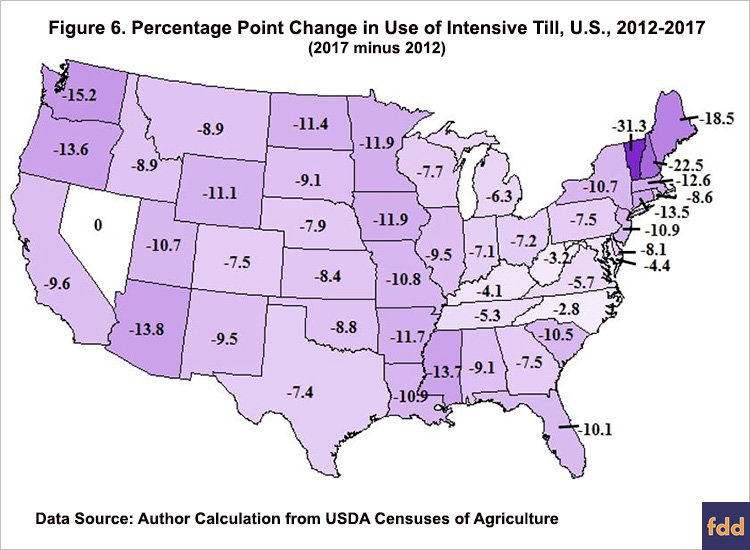 Zulauf, C. and B. Brown. "Cover Crops, 2017 US Census of Agriculture." farmdoc daily (9):135, Department of Agricultural and Consumer Economics, University of Illinois at Urbana-Champaign, July 24, 2019.

Zulauf, C. and B. Brown. “Use of Tile, 2017 US Census of Agriculture.” farmdoc daily (9): 141.  Department of Agricultural and Consumer Economics, University of Illinois at Urbana-Champaign. August 1, 2019.