Strip-till is a relatively common tillage practice on farmland that will be planted to corn in east-central Illinois, accounting for about 14% of the acres planted to corn in Precision Conservation Management (PCM) from 2015 to 2018.  Returns to strip-till have been roughly the same as other one-pass tillage systems, with one-pass systems having higher returns than either two-pass or no-till systems. Nutrients applied using strip-till vary across farms.  The highest returns are associated with farms that do not apply anhydrous ammonia with the strip-till pass.

We summarize data from corn production on farmland in east-central Illinois for the years from 2015 to 2018. PCM is a farmer service program led by the Illinois Corn Growers Association in partnership with over 30 entities including other commodity associations, conservation groups, private foundations, supply chain providers, the Soil and Water Conservation Districts, and the Natural Resource Conservation Service (NRCS). In an effort to address the goals of the Illinois Nutrient Loss Reduction Strategy, the mission of PCM is to help farmers make decisions about adopting on-farm conservation practices in a financially responsible way. Through PCM’s regional Specialists, PCM works one-on-one with over 200 farmers enrolled in its 16-county service area, representing over 200,000 acres of Illinois farmland.

For this article, PCM provided aggregated farmer data to further explore how the economics of tillage practices on farms.  For each field in PCM, the farmer indicated all of their field passes, as well as input usage.  Yields and moisture levels also were included.  This data were used to develop an economic report from each field.  This report included:

Operator and land returns are summarized across tillage benchmarks and strip-till types in the following sections.

Operator and land returns for farmland that were planted to corn are summarized based on the number of tillable passes performed before planting corn.  The following tillage benchmarks resulted:

Note that only tillage passes went into the definition of the system.  All systems had other passes that included fertilizer applications, spraying pesticides, planting, and harvesting.

Table 1 shows the percent of farms falling into each benchmark, as well as the average return, amount of nitrogen applied, and yield.  Note that strip-till had a $253 per acre return and one-pass light systems had a $264 per acre return.  These one-pass systems had higher returns than any of the tillage systems with more tillage passes:  two-pass-light had $242 return, two-pass-medium had $240 return, and 2-plus system had $242 return.  Two-pass systems did not have higher yields than one-pass systems such that there was not an offset associated with the higher tillage costs associated with two-pass systems.  While two-plus systems had higher average yields, the additional yield from two-plus systems did not cover the higher costs of the systems. 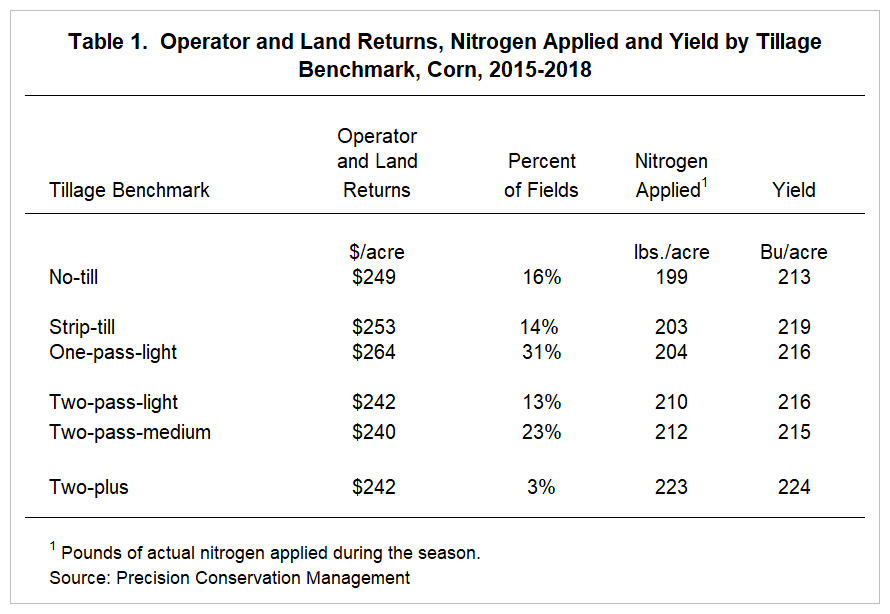 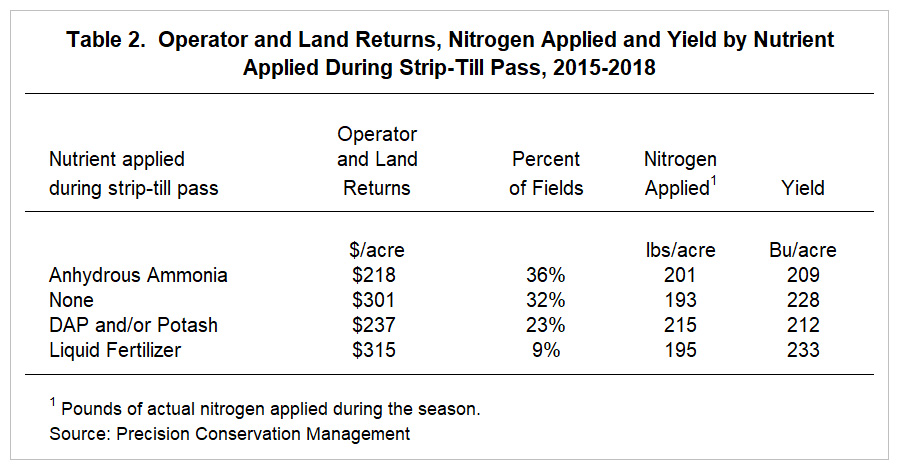 When anhydrous ammonia was applied, 84% of the fields had most nitrogen applied in the fall (“Mostly Fall” in Table 3), with 16% split between pre-plant and sidedress (“50% pre-plant/50% sidedress” see Table 3).

Table 4 shows the average operator and land return from 2015-2018 on strip-till field by nitrogen class. Mostly because of higher yields, trip-till fields categorized as 3-way split have the highest average returns at $292 per acre of any nitrogen benchmark. 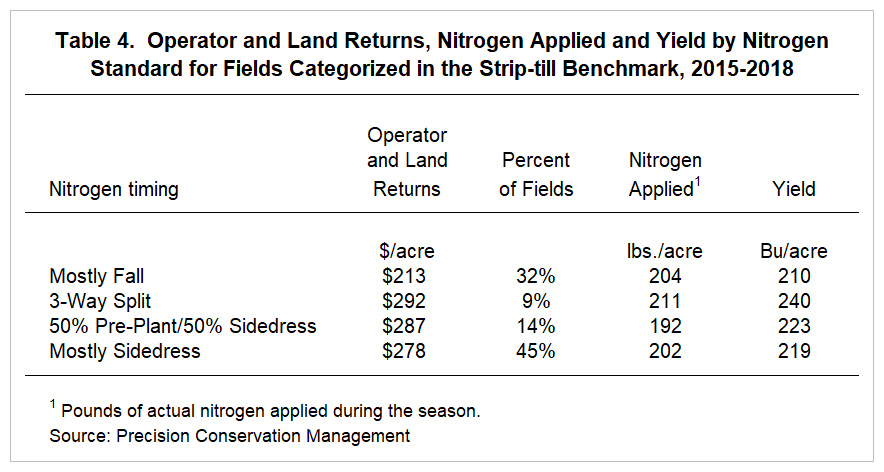 Farmers in Illinois use strip-till in a variety of ways. Even though the most often-applied product with strip-till is anhydrous ammonia, the majority of strip-till fields in this sample applied most of the N fertilizer application in sidedress operations. Strip-till is an economically competitive tillage method. There are other factors which may contribute to a farmer’s decision on whether or not to implement strip-till, such as timing, machinery availability, and labor availability.

The authors would like to acknowledge that data used in this study was generated from the Precision Conservation Management (PCM) program, a farmer service program led by the Illinois Corn Growers Association. PCM is currently enrolling farmers in Champaign, Christian, DeWitt, Douglas, Edgar, Ford, Livingston, Macon, Macoupin, McLean, Piatt, Sangamon, Tazewell, Vermilion, and Woodford counties. For more information, please contact PCM by email at info@precisonconservation.org, or visit the PCM website at www.precisionconservation.org.