Table 1 shows corn and soybean yields in 2018 and 2019 for the Midwest states. These state-level yields come from the National Agricultural Statistical Service (NASS), an agency of the U.S. Department of Agriculture. Yields for 2019 still are projections, with the potential for modifications in the future. 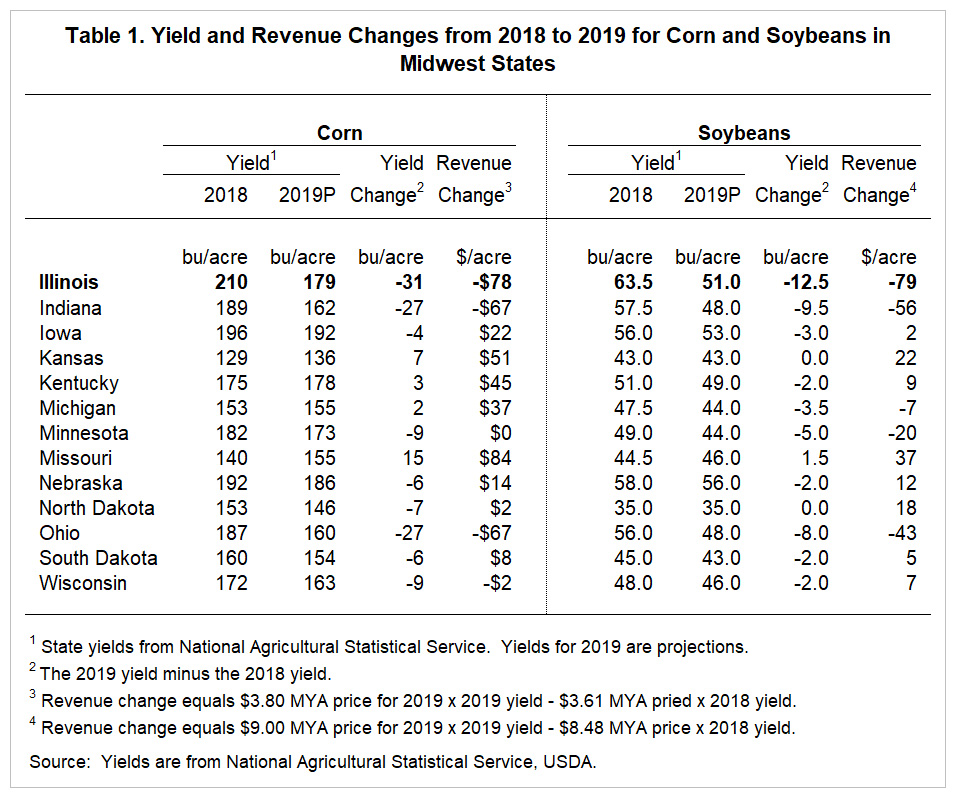 Actual 2019 prices could vary considerably from the current projections. As a result, actual revenue can vary from those shown in this article.

Farms in the western corn-belt could have higher incomes in 2019 compared to 2018. Crop revenue changes could be positive and increases in MFP payments could contribute to higher incomes.

Recent soybean price increases have considerably brightened the income outlook. To illustrate, the Office of Chief Economist of USDA was projecting a 2019 MYA price of $8.10 per bushel in May, increasing to $8.50 in September, and $9.00 in October. Using an $8.50 soybean would result in a -$104 per acre revenue change in Illinois, rather than the -$79 per acre value shown in Table 1 for a 2019 MYA price of $9.00 per bushel.

As is always the case at this time of year, there is a great deal of uncertainty concerning MYA prices for the year. The 2019 marketing year for corn and soybeans has just beginning, and market prices could change considerably from the projections shown in this paper.

Finally, revenue changes will vary considerably across states. In Illinois, for example, yield declines likely will be much larger in parts of northern and southern Illinois compared to central Illinois. Farms with prevented planting could have differing revenue from those that did. As a result, revenue and incomes could vary considerably across farms within states. Even across local areas, yield across farms will vary, leading to income variability.