Nitrogen timing and application rates can also have important implications for water quality. Nutrient losses from agricultural fields have become a high-profile water quality issue since the release of the 2015 Illinois Nutrient Loss Reduction Strategy which determined that 80% of the nitrate-N leaving Illinois through our major rivers originates from agricultural fields.  Nitrate losses from agricultural fields can contaminate local drinking water supplies, forcing local municipal water treatment facilities to upgrade their water treatment equipment.  Increased nitrate levels have also been shown to increase the area of the hypoxic zone further downstream in the Gulf of Mexico, impairing waters for aquatic organisms living there.

We summarize data from corn production on farmland in central Illinois for the years of 2015 to 2018. PCM is a farmer service program led by the Illinois Corn Growers Association in partnership with over 30 entities including other commodity associations, conservation groups, private foundations, supply chain providers, the Soil and Water Conservation Districts, and the Natural Resource Conservation Service (NRCS). In an effort to address the goals of the Illinois Nutrient Loss Reduction Strategy, the mission of PCM is to help farmers make decisions about adopting on-farm conservation practices in a financially responsible way. Through PCM’s regional specialists, PCM works one-on-one with nearly 300 farmers enrolled in its 16-county service area, representing over 200,000 acres of Illinois farmland.

For this article, PCM provided aggregated farmer data to further explore the economics of nitrogen applications on 1,664 central Illinois corn fields, with 64% of the fields classified as high productivity soil (above 130 Soil Productivity Index).  For each field in PCM, the farmer indicated all their field passes, as well as input usage.  Yields and moisture levels also were included.  These data were used to develop an economic analysis of each field.  This report included:

Each field raising corn is classified by a nitrogen benchmark based on the timing of the nitrogen application. This benchmark is characterized into the following classes

The most commonly applied nitrogen products from the PCM dataset on central Illinois corn fields are anhydrous ammonia, UAN 28%, and UAN 32%. Other products applied include urea, custom dry fertilizer, custom liquid fertilizer, DAP, MAP, and AMS. Chart 1 displays the average pounds of nitrogen applied by nitrogen benchmark class. Each bar on the chart displays the average pounds of each product applied within each benchmark class. Anhydrous ammonia is the product most often applied in the fall application class and mostly pre-planting nitrogen class. For the 3-way split, 50% pre-plant/50% sidedress, and mostly sidedress benchmark classes, the most commonly applied product is UAN. Of the 2,557 UAN field passes in the data, 58% of the passes are UAN 28% and 42% of the passes are UAN 32%. 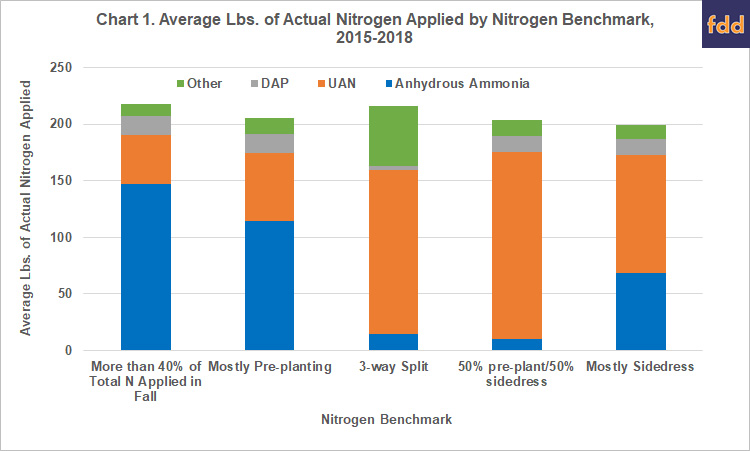 Farmers in central Illinois apply a variety of nitrogen products, with the most-often applied products being anhydrous ammonia, UAN 28%, and UAN 32%. On average, farmers who apply 40% or more of their nitrogen in the fall had the second highest yield but lower returns compared to other nitrogen management classes. The lower returns for fall nitrogen application can mainly be attributed to the cost of a nitrification inhibitor for anhydrous ammonia applications. On average, the other post-fall nitrogen applications provided equally as high or higher operator and land return compared to fall application.

The authors would like to acknowledge that data used in this study was generated from the Precision Conservation Management (PCM) program, a farmer service program led by the Illinois Corn Growers Association. PCM is currently enrolling farmers in Champaign, Christian, DeWitt, Douglas, Edgar, Ford, Livingston, Macon, Macoupin, McLean, Piatt, Sangamon, Tazewell, Vermilion, and Woodford counties. For more information, please contact PCM by email at info@precisonconservation.org, or visit the PCM website at www.precisionconservation.org.