Fertilizer, seed, and chemical costs represent a sizable portion of the total costs of producing corn.  In this article, costs for these three inputs are reported for the years from 2000 to 2017.  Since 2013, fertilizer costs decreased while seed costs remained stable.  In recent years, pesticide costs increased.  Looking forward into 2019, it seems reasonable to expect pesticide costs to be at higher levels while seed costs may remain stable.  At this point, fertilizer costs are difficult to predict.

The sum of fertilizer, seed, and pesticide costs are shown in Figure 1 for:

The two cost series follow each other tightly, having a correlation coefficient of .98.   The high correlation of the series suggests that costs reported by FBFM are reflective of trends across the greater Midwest.  Central Illinois costs are higher than Heartland costs, likely because yields are higher on high-productivity farmland in central Illinois.  From 2015 to 2017, average corn yields were 218 bushels per acre in central Illinois compared to 191 bushels per acre in the Heartland. 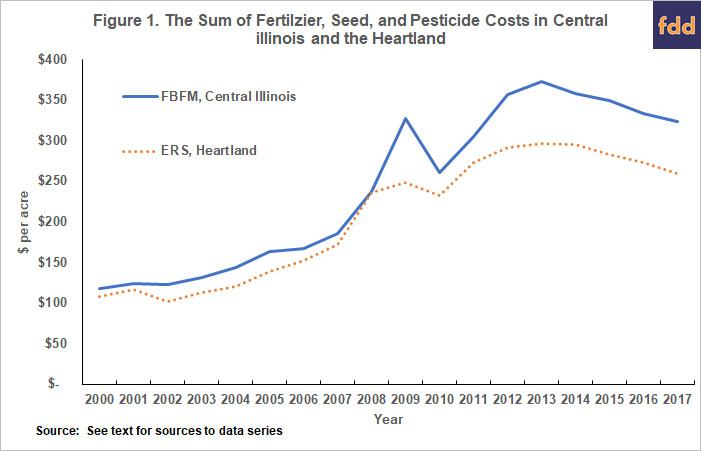 For 2018 production, fertilizer prices began the major purchase period in the fall of 2017 with prices lower than 2017 crop year averages.  Fertilizer prices increased throughout late 2017 and the first part of 2018.  It is likely that average fertilizer costs for corn will be higher in 2018, but the timing of purchase will have a large impact on costs.  Farmers purchasing fertilizer earlier will have lower costs than those purchasing later.

No bids for 2019 are publicly available at this point.  It seems reasonable to expect roughly the same costs in 2019 as in 2018.  Still, as illustrated in Figure 2, fertilizer costs can vary tremendously from year to year. 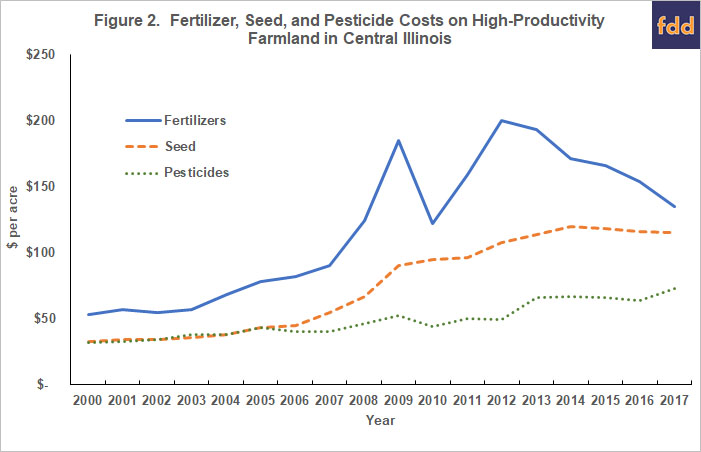 Seed costs are highly related to harvested acres in the world (farmdoc daily, July 18, 2017).  U.S. acres are projected down in 2018 (USDA, Prospective Plantings). However, world acres are not projected down in 2018 (USDA, Foreign Agricultural Service).  As a result, seed costs likely will remain the same in 2018 as in 2017.  Similarly, stable seed costs in 2019 seem a reasonable projection.

When developing 2019 crop budgets, having seed costs per acre remain stable and pesticide costs the same or higher than 2017 levels seems reasonable.  Fertilizer costs will come into clearer perspective towards fall.  At this point, it seems reasonable to expect the sum of fertilizer, seed, and chemical costs to remain stable or increase in 2019.

Schnitkey, G. "Revenue and Costs for Corn, Soybeans, Wheat, and Double-Crop Soybeans, Actual for 2011 through 2016, Projected 2017 and 2018." Department of Agricultural and Consumer Economics, University of Illinois at Urbana-Champaign, February 2018.