In the last few years, there has been a hot debate about how important it is for a country to be open to trade. As a result of the recent trade war between China and the United States, there is increasing interest in knowing whether current account deficits are bad (or good), and what are the determinants of those trade deficits. Devaluating the currency has been suggested in the past to close these trade imbalances, but the effectiveness of this policy is limited, and it can have long-term consequences for countries in terms of inflation and volatility.

While a current account deficit is not good or bad per se, its persistence is an indication of a currency that is appreciating in value because it indicates net inflows of investment. When the local currency appreciates, exports become more expensive, and imports become cheaper. From the perspective of the producer and exporter, a highly valued currency poses a challenge to their competitiveness because what they sell becomes more costly to consumers, both domestically and abroad. As a consequence, governments can be tempted to devalue their currency to foster exports and improve their trade balance.

For example, since 2003, Argentina has had persistent trade deficits with Brazil, one of its most important trading partners (Figure 1). With a currency devaluation in 2018 and 2019 (Figure 2), Argentina closed the trade deficit with Brazil. All else equal, goods and services from Argentina become relatively cheap compared to the rest of the world. Hence, in the short run, there is an increase in the demand for the goods and services that Argentina produces. In consequence, the devaluation of the Argentine peso improves the balance of trade. 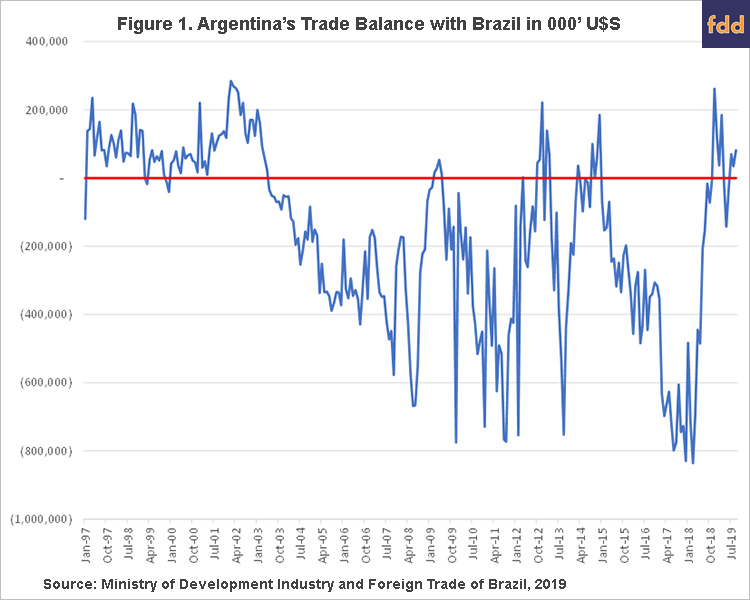 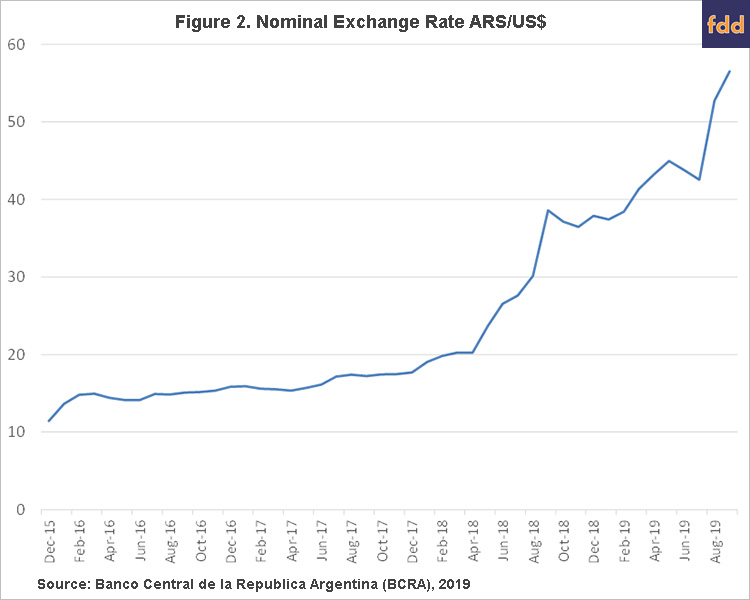 The effect of a devaluation is also reflected by the increase in the Real Effective Exchange Rate (REER). The REER is a measure of a currency for a basket of currencies from the main trading partners weighted by their importance in bilateral trade.  In Argentina, the devaluation increased the REER with respect to its central export destination countries (Figure 3). However, this increase in the REER is temporary because the effect of the devaluation is being eroded by the increase in inflation. Since year-over-year inflation is already high, the positive impact of the initial depreciation lasted less than a year. 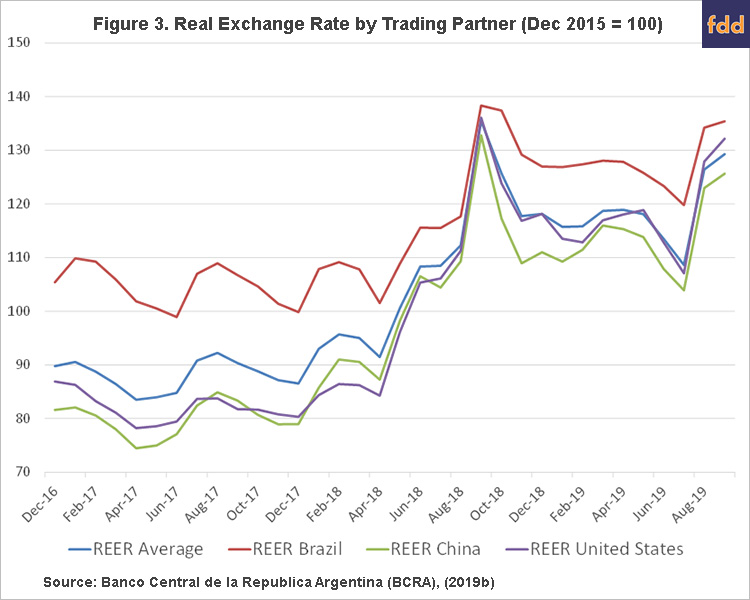 A currency devaluation is not without consequences. Targeting trade imbalances with a currency devaluation can generate inflation, a general increase in price levels of the goods and services faced by consumers. In the short run, the quantity of good and services produced in a country is relatively fixed. So, an increase in the nominal exchange rate increases local prices and decreases the purchasing power of domestic consumers. After the devaluation in April 2018, Argentina saw a rise in the year-over-year inflation from a 22-24% (Yes, for Argentina, this is a low inflation rate!) to rates around 45-50% by the end of the year. 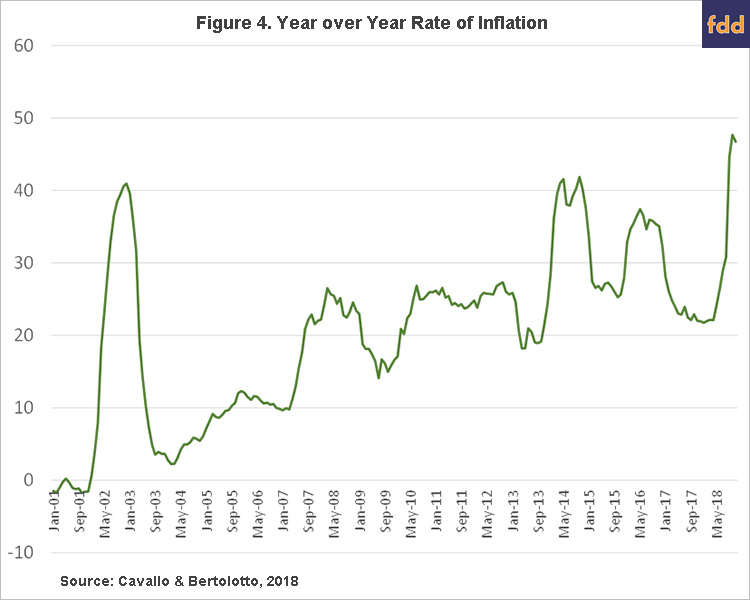 Things can get worse if a country has a persistent fiscal deficit along with a current account deficit, called “twin” deficits. If a country has a fiscal deficit, its revenue from taxes is lower than its expenditure. As in the case of trade deficits, a devaluation may also help to close the fiscal gap. By devaluing the currency, the rise in government revenue increases the value of the taxable goods and reduce the real value of government spending in the same way as any other consumer of the local economy. Since 2011, trade deficits coexist with fiscal deficits in Argentina (Figures 5 and 6). In 2018, as a consequence of the devaluation, we saw that there is a turning point. However, this level of deficit as percentage of the Gross Domestic Product (GDP) is high (5%) compared to the average of Latin America (2.9%). 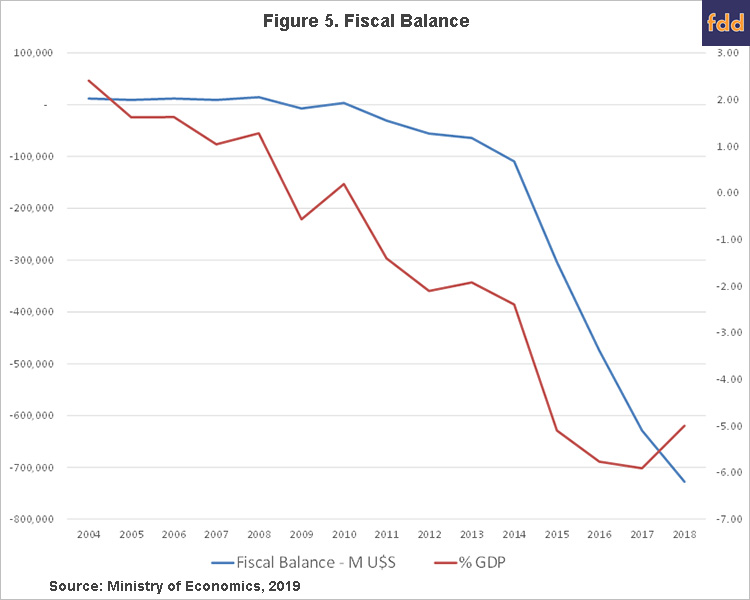 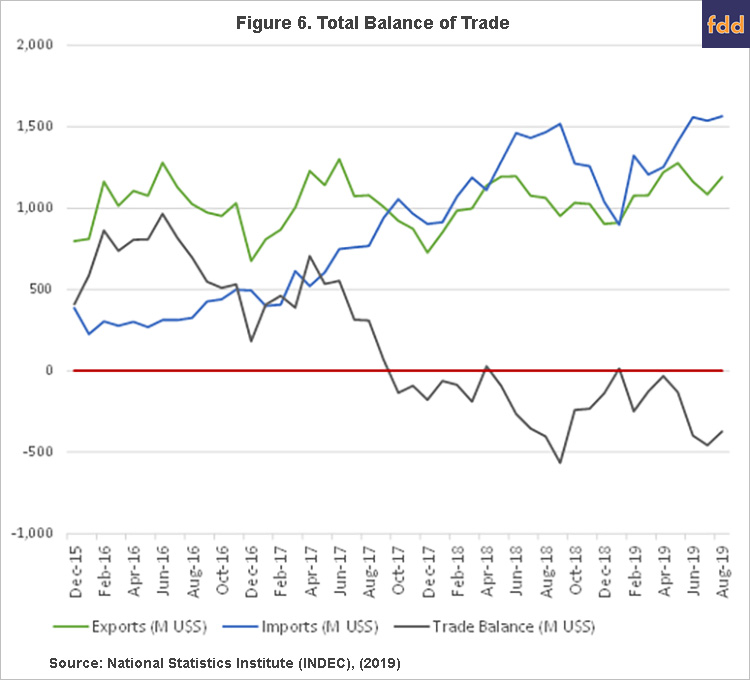 While a devaluation might improve the balance of trade in the short run, it does not solve structural problems in the economy. The currency depreciation generates inflation and it can deteriorates the real exchange rate so quickly that the benefits of doing so might not outweigh the costs. An alternate way for  Argentina to improve the balance of trade would be to reduce export taxes.  Second, despite being a country with substantial comparative advantages in the production of many export goods, Argentina has a relatively closed economy.  In 2017, Argentina was 169 out of 171 countries in its ranking of trade openness. If it reduced its import tariffs, while it might increase the trade deficit in the short run, it could stimulate long-run economic growth because these trade opportunities will increase industrialization and value-added in the country. Given it’s history and continued future potential as an agricultural powerhouse, it has much to gain from having a stable and open economic relationship with the rest of the world.