Going into election year 1956, surpluses of the major commodities had piled up, prices remained depressed (at least compared to costs) and the politics around farm policy had become more contentious.  President Eisenhower was on the ballot and Congressional Republicans were still hurting from the mid-term losses in 1954.  The major innovation on the table was to pay farmers to reduce acres planted to the surplus bulk commodities. A concept that originated with farmers in Illinois, went on to be promoted by President Eisenhower and eventually signed into law with the Agricultural Act of 1956.  This article continues the conservation discussion with a look at the development of the Soil Bank from concept to statutory program.

On January 9, 1956, President Dwight Eisenhower delivered a special message to Congress on farm policy (Eisenhower 1956).  The centerpiece of the President’s proposal was the creation of a Soil Bank that would consist of two programs.  First, the Acreage Reserve Program would pay farmers who voluntarily reduced the acres they planted to the major surplus crops (corn, wheat, cotton and rice) below their acreage allotments.  The second part of the Soil Bank was the Conservation Reserve Program, pursuant to which USDA would rent acres out of crop production for a longer term; a program applied to those acres that were considered less productive.  Farmers would enter into the long-term contract, agreeing to establish a conservation cover and not produce any crop on the acres.  In return, the farmer would receive annual rental payments and a per-acre payment to establish a conservation cover on the land.

In total, the Soil Bank was intended to reduce incentives to overproduce crops that were already in surplus, thereby helping to reduce the surplus stocks held in government storage.  It was also intended to help conserve soils both in the years of the temporary reduction, as well as for those acres that were less-suitable to production and put in the long-term reserve.  President Eisenhower estimated 12 million wheat acres and 3 million cotton acres would go into the Acreage Reserve, which would cover three to four year contracts; annual costs he estimated to be about $250 million to be largely offset by reduced storage and handling costs.  The Conservation Reserve, he estimated, would cover about 25 million acres at a cost of $350 million in 1956, rising to $1 billion thereafter.  In terms of 2019 dollars, this would be over $2 billion annually for the Acreage Reserve costs and over $3 billion for the Conservation Reserve, rising to $9.6 billion (BLS Inflation Calculator).

As discussed previously, the initial concept for a soil bank had been proposed by Melvin P. Gehlbach of Lincoln, Illinois to the House Agriculture Committee in a field hearing in October 1953 (farmdoc daily, January 9, 2020).  The most notable feature of the original proposal, arguably, was the concept that farmers would deposit funds into the soil bank based on production and that those funds would be used to pay farmers to reduce plantings of the crops on less productive (low-yielding) acres (House Agriculture Committee, 1953; Senate Agriculture Committee, 1954).  Similar to the current check-off concept in its original design, farmers would fund the soil bank, shifting some money to low-yielding acres.  To provide perspective, Figure 1 illustrates the total production of the major crops in the years leading up to 1956.  Using the average of these years for corn (2.9 billion bushels), a $0.02 per bushel deposit into the soil bank would have raised just over $57 million per year to pay farmers reducing corn acres on low-yielding acres; farmers planted an average of 82 million acres in corn during these years. 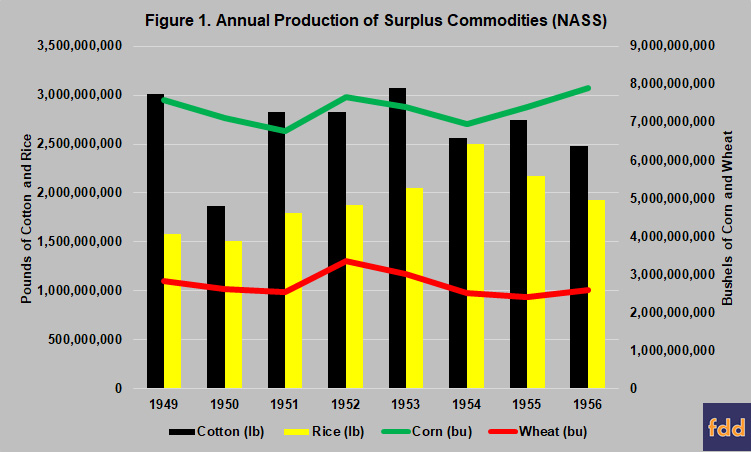 Professor H.C.M. Case of the University of Illinois, Department of Agricultural Economics, produced an alternate version of the soil bank concept in papers he published in 1954 and 1955 (Case, 1954; Case, 1955).  Pointing out the political problems with having farmers pay into a soil bank that would then compensate other farmers on acres reduced, he proposed direct payments to farmers for reducing acres planted to surplus crops on lower yielding (or less productive) lands, as well as adjusting price supports based upon the percentage of acres put into soil conservation.  The primary goals of his proposal were to stabilize farm income on a more equitable basis and “achieve good land use for both present and future production needs” (Case, 1954, at 57).  He added variable price support levels in the 1955 version of the proposal, which he argued would cut surpluses of the supported commodities, “provide freedom to the farmer” and “a shift in low-producing land to grazing use on a permanent basis” while also “help to discourage the excessive and uneconomic use of fertilizers and other measures designed to increase production in order to get an artificially high price for farm products and a high income through high price supports” (Case, 1955, at 6).

Political momentum was quickly building behind the concept.  In 1954, Senator Edward Thye (R-MN) introduced a bill that would create a special program for payments on acres diverted out of the production of surplus commodities and into conservation rather than production of either crops or livestock (U.S. Senate, S.3036, 1954).  Senator Thye’s bill used rental contracts for those acres with the rental payment calculated on at least 25% of the support price and the average yield.  In 1955, multiple bills were introduced in the House and the Senate that sought to create a conservation acreage reserve program that would reduce acres and divert them into conserving uses (cover) in return for rental payments; most prioritized sub-marginal or low-productivity acres for the reserve and payments.  Also in 1955, the American Farm Bureau Federation adopted a resolution calling for enactment of a soil bank policy (Lacey, 1965).

President Eisenhower’s 1956 proposal combined many of the concepts in earlier proposals: an Acreage Reserve to reduce planted acres of surplus commodities, diverting them to conservation cover rather than competing crops; and a long-term Conservation Reserve to remove from production acres that were not ideal for intensive crop production.  The President’s proposal added a unique policy concept: pay farmers for the Acreage Reserve in kind from surplus stocks of the Commodity Credit Corporation.  Farmers who voluntarily reduced their acres of a crop below the allotment would be issued certificates for stocks of that commodity held in government storage; the certificates could be converted to cash or redeemable for commodities that the farmer could sell on the market in place of the crop not harvested.  This component of Eisenhower’s plan was intended to use the existing surplus to assist farmers in reducing the surplus.  Farmers would receive certificates based on historic yields for the acres reduced.

Secretary of Agriculture, Ezra Taft Benson, followed the President’s proposal with testimony to the Senate Committee on Agriculture and Forestry on January 12, 1956.  He stressed the damaging impact of CCC surpluses on farm prices and income, informing Senators that USDA economists estimated that the surpluses “reduced farm income in 1955 by the staggering sum of more than $2 billion”—the equivalent of $19.25 billion in 2019 dollars, according to the BLS Inflation Calculator (Committee on Agriculture and Forestry 1956, at 3294). Secretary Benson informed Senators that a USDA advisory commission had studied the issues and various proposals, concluding that the Soil Bank was the best chance of addressing the problems.  In particular, he argued that the payment-in-kind certificate feature would provide income to offset the lost income for the farmer on acres reduced below allotments and placed in the Acreage Reserve, while saving federal costs by reducing surplus storage and handling.

Finally, the Secretary reiterated the President’s goals for program acreage: between 40 and 45 million acres in the Soil Bank with 25 million in the long-term Conservation Reserve and 15 million to 20 million in the annual Acreage reserve; of the acres in the Acreage Reserve, Secretary Benson stated that most (12 to 15 million acres) would be reductions in wheat allotments.  While the Acreage Reserve was proposed for wheat, cotton, corn and rice, much of the focus remained on the diversion of wheat and cotton acres into feed grains.  This diversion was considered to have caused surpluses in feed grains that hurt prices but also contributed to overproduction of cattle and hogs and lower prices for those farmers; forcing reductions in wheat and cotton acres appeared to be rippling across the farm economy.  The Secretary claimed that the acreage reserve program of the “soil bank will cut into the production of feed grains” but indicated little focus on corn and other feed grain acres, indicating that the acreage reserve program would have to be “adapted” to corn (Committee on Agriculture and Forestry 1956, at 3296).  To put the President’s Soil Bank proposal into perspective, Figure 2 provides another look of acres planted to these commodities as reported by NASS Quick Stats (see also, farmdoc daily, January 9, 2020, Figure 4) and Table 1 compares planted acres to acreage allotments and the Acreage Reserve as proposed. 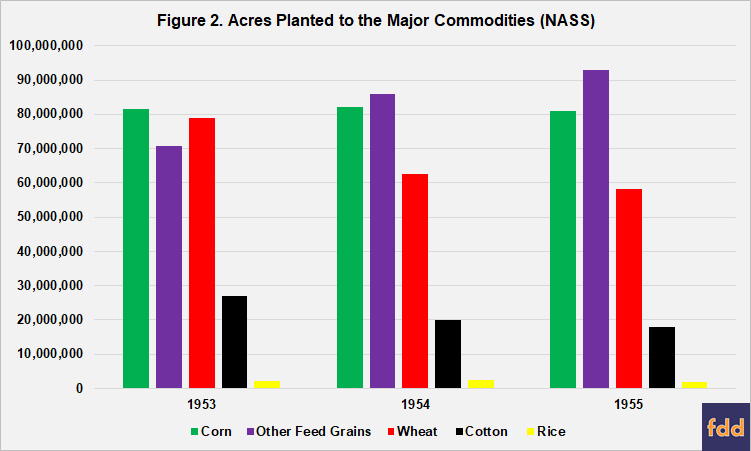 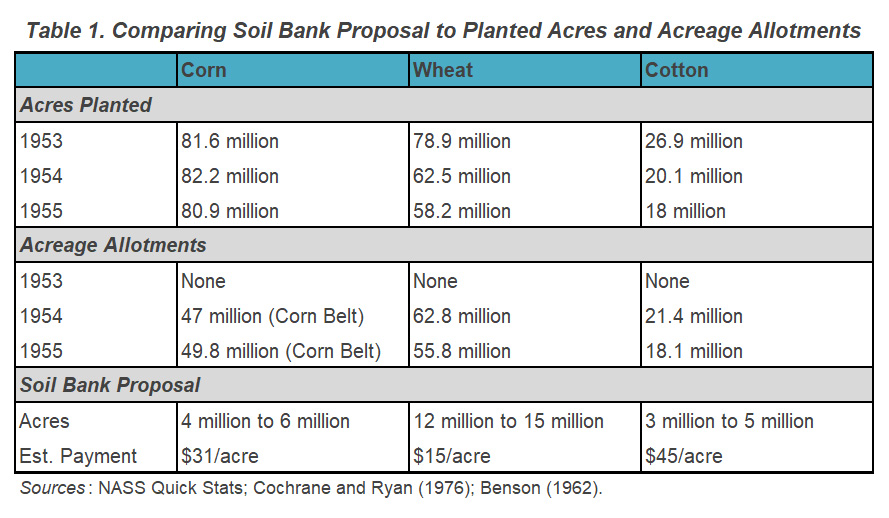 From concept to enactment, the Soil Bank’s development took less than three years (1953 to 1956).  The initial concept included having farmers contribute funds from production of soil-depleting crops to pay other farmers to reduce planted acres of those crops, supplementing income for those acres diverted to conservation.  Members of Congress sought to create a long-term reserve program that removed from production those acres considered less productive or sub-marginal.  President Eisenhower’s USDA combined these and other concepts into the 1956 Soil Bank proposal he submitted to Congress, while adding a new payment feature.  The Administration program sought to reduce acres on a short-term basis of price-supported crops that were in surplus (the Acreage Reserve) with in-kind compensation to the farmer through certificates on CCC stocks.  This annual reduction was coupled with a long-term program to remove acres from production (the Conservation Reserve) in exchange for annual rental payments.  The final steps in the Soil Bank development as it was written by the Congressional Agriculture Committees faced political challenges and will be explored in the next article in this series, as well as the program’s implementation and operation.