It being February, the political focus turned momentarily back to matters of budget and deficit.  In late January, the Congressional Budget Office (CBO) released its updated baseline estimates for federal mandatory spending programs, as well as updated projections on federal deficits and debt.  February also brings the annual release of the President’s budget proposal.  This article reviews the latest information for the federal budget and farm assistance; an updated chapter in the long-running discussion of budget discipline and reform (see e.g., farmdoc daily, November 29, 2018).

CBO released its Budget and Economic Outlook for 2020 to 2030 at the end of January (CBO, January 28, 2020).  The most notable projection by CBO was that the federal budget deficit—the amount by which outlays exceed revenues in a fiscal year—will be $1.015 trillion in 2020 and average $1.3 trillion every year from 2021 to 2030.  Figure 1 illustrates the CBO data from 1970 through the projections for 2030 for federal revenues, outlays and deficits or surplus measured as a percentage of Gross Domestic Product (GDP).  CBO added that the new projections included an $8 billion increase in the deficit for 2020 above what it projected in August 2019, and $160 billion more in deficits from 2020 through 2029.  CBO explained that the increases were due to the consolidated appropriations bills for 2020, one of which included the extension of several dozen expiring (or expired) tax breaks, as well as the repeal of three health care excise taxes.  These increases in deficits were expected to be offset by higher employment but somewhat slower growth. 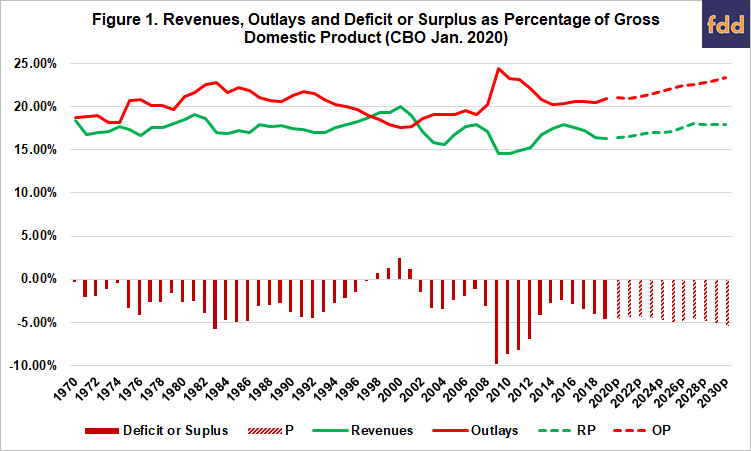 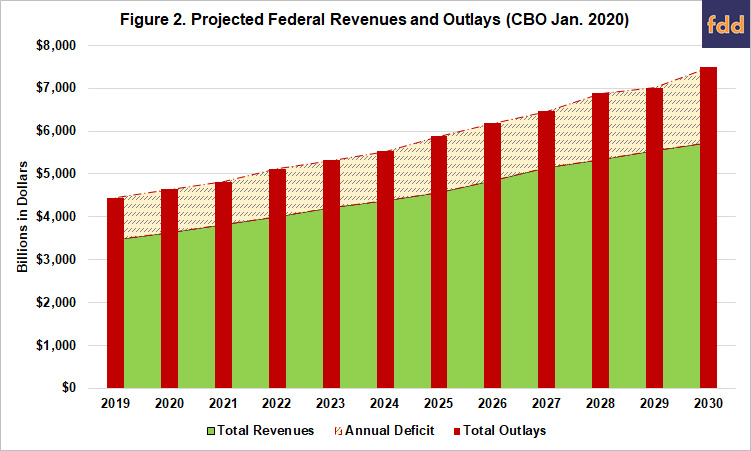 Within this background of federal revenues, outlays, debt and deficit exist the mandatory spending programs of the farm bill.  The four major programs of farm bill mandatory spending are the commodities support programs in Title I, conservation programs in Title II, the Supplemental Nutrition Assistance Program (SNAP) in Title IV, and crop insurance spending in Title XI.  The following discussion will review the updated baselines for these programs, as well as what the President proposed in his budget.

In addition to its overall budget picture, CBO also produces individual projections for the baselines of certain mandatory spending programs.  These projections include baselines for USDA Mandatory Farm Programs (CBO, Farm Programs, Jan. 2020) and for the Supplemental Nutrition Assistance Program (CBO, SNAP, Jan. 2020).  Figure 3 illustrates the projections for all mandatory farm bill programs, as well as the outlays attributed to the Administratively-created Market Facilitation Program (MFP) and other Commodity Credit Corporation (CCC) spending initiated due to the trade conflict. 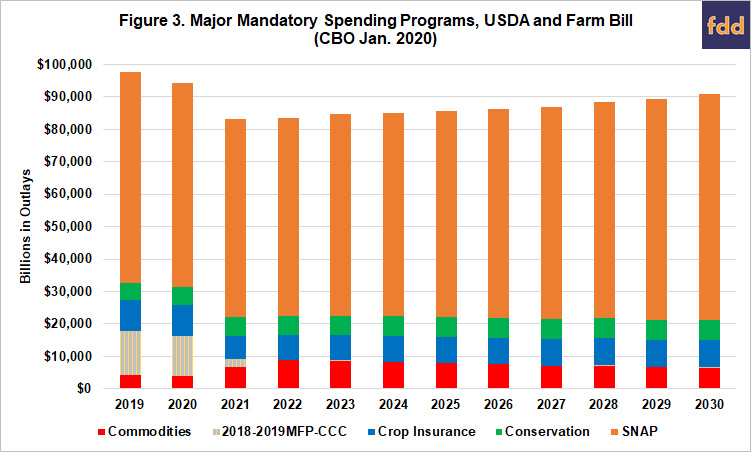 Clear in Figure 3, SNAP benefits to low-income persons and families for the purchase of food remains the largest program in terms of outlays in the Farm Bill.  Figure 4 further illustrates CBO’s projects for SNAP, comparing outlays and average monthly persons expected to participate in the program.  CBO is projecting a continued decline in the number of persons participating in the program, falling from almost 38 million Americans on average each month in 2019 to just over 30 million per month in 2030.  These estimates also serve as a reminder that SNAP is by far the largest program in terms of beneficiaries of assistance in the farm bill, which is the reason for its large level of outlays compared to the other programs.  Spending on benefits initially declines with this reduction in participation but starts to climb in the later years as the average monthly benefits increase due to expected increases in the cost of food. 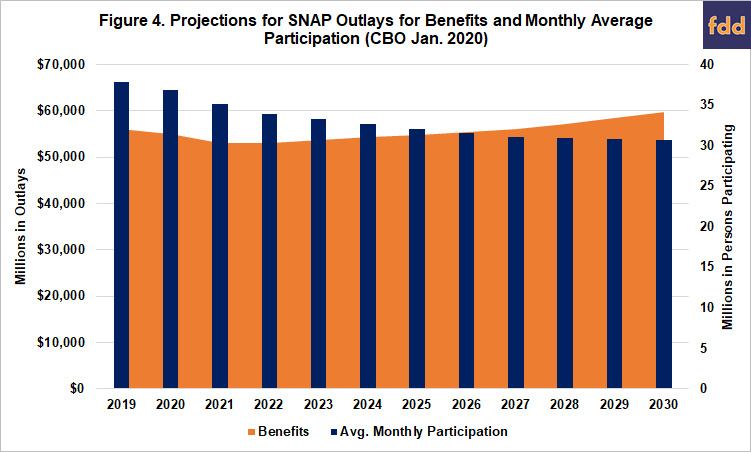 Figure 5 illustrates the projections for spending on farm policies, commodities support programs, crop insurance and conservation.  Similar to Figure 3, the initial three fiscal years (FY2019, 2020 and 2021) in Figure 5 include the outlays for the USDA-initiated spending in MFP and other CCC outlays, all of it without direct Congressional authorization in the farm bill.  As previously discussed, spending for MFP and other Administration-initiated CCC programs exceeds the outlays from individual farm bill program titles and nearly equals the total of all other spending on farmers in fiscal years 2019 and 2020; MFP dwarfs the ARC/PLC outlays reauthorized in the 2018 Farm Bill and pushes total outlays for farmers in each of those fiscal years above $30 billion. 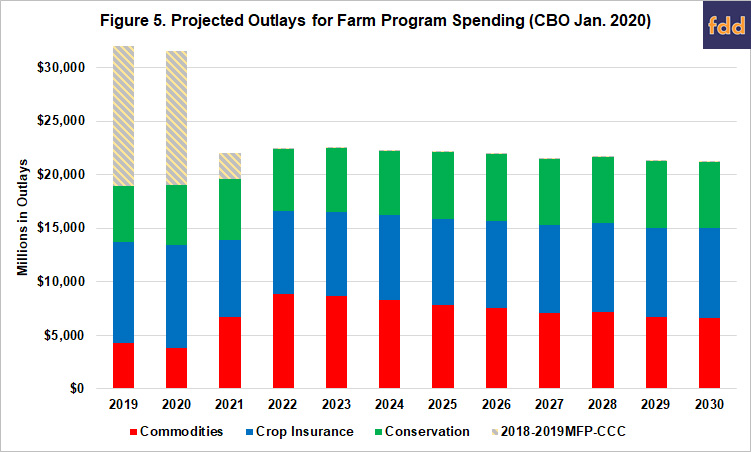 Finally, on February 10, 2020, President Trump released the annual budget message and proposal for fiscal year 2021 (President’s Budget, FY2021).  For farm policy, the President recommended a total of nearly $47.7 billion in spending reductions over 10 years.  As explained by USDA, the proposal includes lowering Adjusted Gross Income (AGI) eligibility requirements to $500,000 or less for all commodity program and conservation payments, as well as eliminate the separate $125,000 payment limit for peanuts; the proposal includes limiting all farms to only a single manager qualifying as actively engaged and subject marketing loan assistance to the $125,000 limit (USDA, 2021 Budget Summary).  The budget estimates saving $2.7 billion over 10 years with these changes.

The budget also recommends eliminating the Conservation Stewardship Program (CSP) and reducing funding for the Agricultural Conservation Easement Program to save an estimated $8.6 billion over 10 years.  In addition, the budget proposes requiring a $500,000 AGI for crop insurance premium subsidies and reducing subsidy for Harvest Price coverage by 15 percentage points and all insurance premium subsidy rates by 10 percent, while also capping underwriting gains for insurance companies.  In total, the President’s proposal estimates that its recommended changes to crop insurance would save nearly $25 billion over 10 years.  Finally, the budget includes eliminating what it calls “redundant Farm Bill programs” to save $6.4 billion over 10 years.  Figure 6 illustrates the estimations from the Office of Management and Budget of the savings these recommended cuts to farm assistance programs would produce. 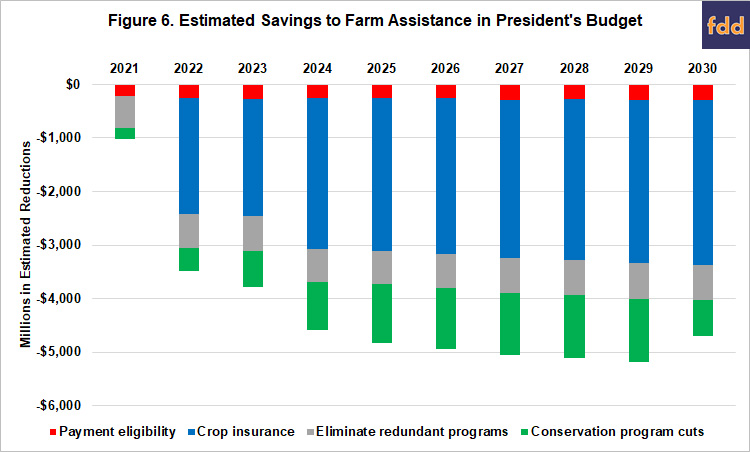 Maybe the most notable aspect of the President’s budget proposal and USDA’s explanation is the juxtaposition with its MFP and other CCC assistance.  For example, MFP eligibility required $900,000 in AGI averaged across 2015, 2016 and 2017 (USDA, farmers.gov).  In addition, a supplemental appropriations act revised eligibility for the 2018 MFP payments, making eligible those producers who had been ineligible because of having an AGI above $900,000.  The 2019 MFP payments doubled the statutory limit of $125,000 in payments to a $250,000 limit per farmer and, although the rule states that actively engaged requirements apply, reports indicate some farms have managed to collect payments well in excess of these limits (Faber et al., June 11, 2019).  Finally, and arguably most notably, the MFP program has spent more in three fiscal years ($28.7 billion) than the President proposes to cut from crop insurance and farm programs over 10 years ($27.6 billion).

The President’s budget and its recommendations for legislative changes by Congress to cut spending have become increasingly irrelevant in recent years.  President Trump’s proposal for fiscal year 2021 appears destined to become the least relevant yet; likely designed more for messaging purposes in the campaign than for any consideration by Congress (Tankersley et al., February 10, 2020).  This is largely due to the fact that the federal government is currently operating under a two-year budget agreement negotiated in 2019 (Davis, July 22, 2019).  Additionally, the Congressional Budget Office is estimating an increase in the yearly deficits and the federal debt; deficits topping $1 trillion per fiscal year for the foreseeable future.  For the programs that provide direct assistance to farmers, the President is proposing substantial cuts to crop insurance and conservation programs, while also seeking some reductions to spending for farm programs based on eligibility requirements.  The sincerity of these proposals, however, is called into question by the Administration’s own actions in using Commodity Credit Corporation authorities to spend more in MFP in just three fiscal years—and with higher payment limits and looser eligibility requirements—than the President proposes to cut from crop insurance and farm programs over 10 fiscal years.