Extraordinary restrictions have been put in place in an attempt to slow the spread of the coronavirus in the U.S. and many other nations. The restrictions range from shelter-in-place orders to milder social distancing guidelines. The result is a contraction in economic activity unlike anything witnessed since the Great Depression. For example, the U.S. Department of Labor reported that 3.3 million people filed for unemployment benefits last week alone, dwarfing any previous level even in recessions. One implication of the virus-related restrictions is that people are driving much less than before, which means that gasoline and ethanol use are declining. The impact on the price of ethanol has been swift and severe, as shown in Figure 1. The price of ethanol at the Iowa plant level has declined $0.32 per gallon, or 26 percent, since late February. There is naturally great interest in the magnitude of ethanol demand destruction and the implications for corn ethanol use going forward. The purpose of this article is to investigate the potential level of ethanol demand destruction over the next few months and the associated impact on corn ethanol use. 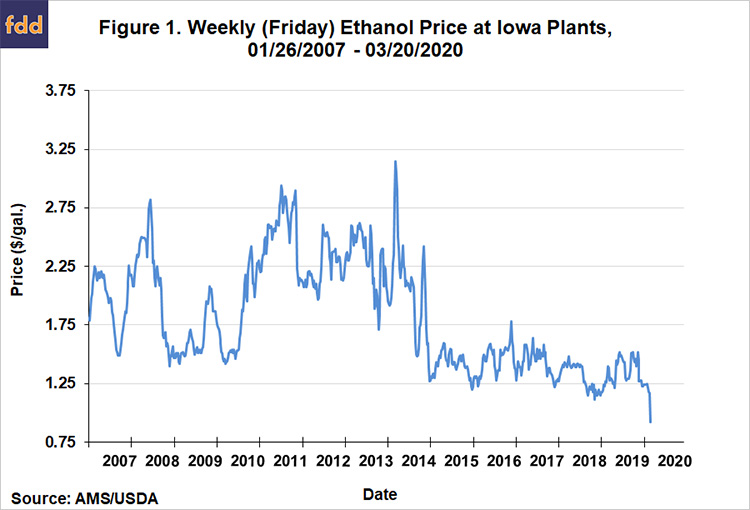 We begin by reviewing the available data of the impact of coronavirus restrictions on gasoline use in the U.S. The weekly use of gasoline in the U.S. can be derived from stock and production data published in the EIA Weekly Petroleum Status Report. The latest available data on implied gasoline use is shown in Figure 2. It reveals a steep drop in implied gasoline use for the week ending March 20th, about 9 percent and well below the level of 2019 and the five-year average. This is obviously only a partial picture because many of virus-related restrictions had just been instituted last week and more have been instituted since. Qualitative indicators of the full impact on miles driven and gasoline use are provided by traffic statistics in metro areas and pollution levels. A recent New York Times article provides anecdotal evidence of traffic declines in major U.S. cities of 40 to 60 percent and correspondingly large reductions in air pollution. 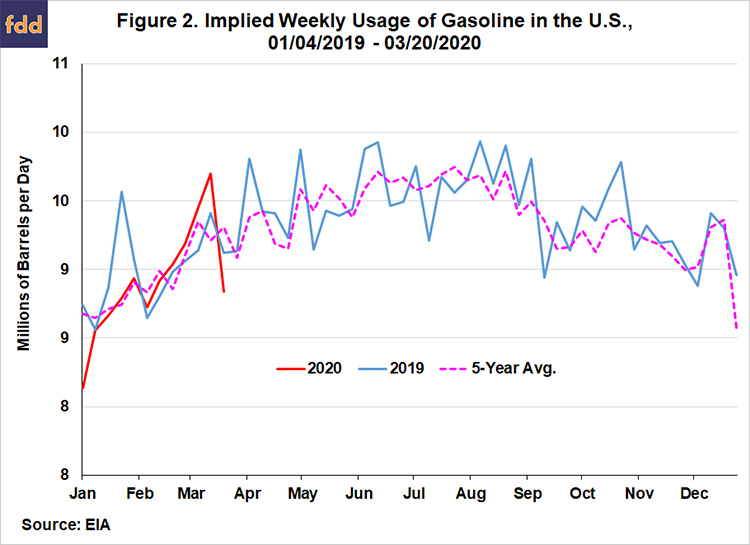 While this information is helpful, it does not provide a sufficient foundation for making national projections of the impact on gasoline and ethanol use. The approach we take here is based on the level of restrictions currently in place in every state in the U.S., making an assumption about the impact of the restrictions on miles driven and gasoline use, and then weighting the impact by the proportion of gasoline use represented by each state. The specific steps are as follows:

The reductions in gasoline, ethanol, and corn use discussed above are based on the assumption that virus-related restrictions in place in late March stay in place through the entire month of April and then lessen in May. There is obviously considerable uncertainty whether this will turn out to be the case. To provides some perspective on a possible worst-case scenario, we re-do the analysis assuming that 80 percent of gasoline demand is represented by the shelter-in-place category and 20 percent is represented by the social distancing category. All other assumptions remain the same. In this alternative scenario, the total decline in gasoline use for the three months is 9.9 billion gallons, the decline for ethanol use is 999 million gallons, and the decline in corn use for ethanol is 345 million bushels. We could also consider scenarios that lengthen and shorten the amount of time that the restrictions are in place, which would correspondingly increase and decrease the projections of demand destruction.

As a final step in the analysis, we examine the signal that the market is providing to ethanol producers to shut down production. Figure 3 shows the weekly market price of ethanol at plants (same as in Figure 1) and the shutdown price for a representative ethanol plant over January 26, 2007 through March 20, 2020. The representative plant model is discussed in detail in the farmdoc daily article of January 29, 2020. The shutdown price equals variable costs minus non-ethanol revenue (DDGS and corn oil). It turns out that the market price and the shutdown price are basically the same right now, about $0.92 per gallon. The implication is that the market is signaling that the representative plant should be shutting down or at least reducing production drastically. It is no surprise then to read reports of ethanol companies shuttering half of their production, although this is a larger reduction than the analysis in Table 1 suggests is necessary. 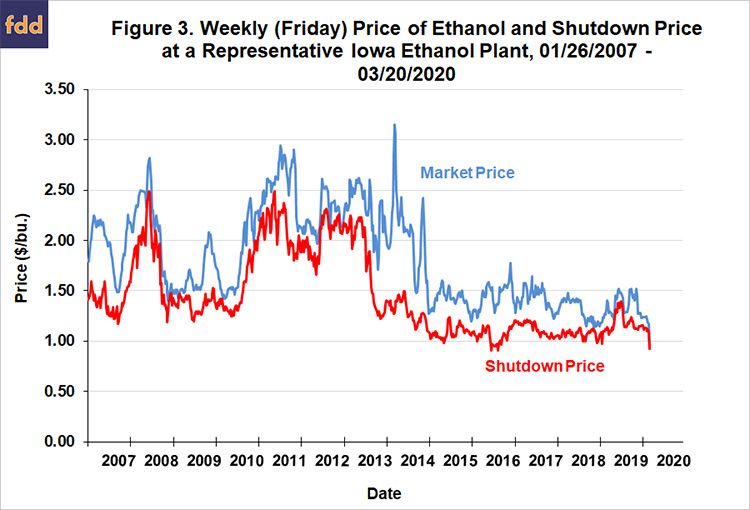 The coronavirus pandemic is having profound impacts on the U.S. economy. A key question for the grain markets is how much ethanol demand destruction will be caused by the ongoing economic contraction. We develop a procedure here to estimate ethanol demand destruction based on the impact of virus-related restrictions on gasoline use in the U.S. for the March through May 2020 period. The estimated reductions in ethanol use are 143 million gallons in March, 391 million gallons in April, and 207 million gallons in May, for a total reduction of 741 million gallons. Converting these to reductions to corn used to produce ethanol results in a total reduction in corn ethanol use for the three months of 256 million bushels, an amount that would materially increase corn ending stocks for the 2019/20 marketing year. These projections should be viewed with considerable caution, as there is still great uncertainty about the path of the coronavirus pandemic and the severity and length of restrictions necessary to contain the spread. Upcoming weekly EIA reports on the pace of gasoline consumption will provide crucial data whether the pace of demand destruction is better or worse than our projections.

Irwin, S. "Why are Ethanol Prices So Low?" farmdoc daily (9):23, Department of Agricultural and Consumer Economics, University of Illinois at Urbana-Champaign, February 8, 2019.