The U.S. ethanol industry faced major headwinds in 2019, including low ethanol and dried distillers grain (DDGS) prices and continued policy setbacks in the implementation of the RFS.  There was some good news with the granting of a year-round RVP waiver for E15, but the immediate impact was modest at best.  The impact of these headwinds on ethanol production profits is certainly of interest to those in the ethanol industry, as well as policymakers and legislators interested in the financial health of the U.S. renewable fuels industry.  The purpose of this article is to estimate the profitability of U.S. ethanol production in 2019 using the same basic model of a representative Iowa ethanol plant that has been used in earlier farmdoc daily articles on the subject (e.g., February 1, 2017; March 14, 2018; February 13, 2019).

As noted above, a model of a representative Iowa ethanol plant is used to track the profitability of ethanol production.  The model is meant to be representative of an “average” ethanol plant constructed in the mid-2000s.  There is certainly substantial variation in capacity and production efficiency across the industry and this should be kept in mind when viewing profit estimates from the model.  Some of the model assumptions include:

Note that some of the above assumptions have changed from those in previous farmdoc daily articles on ethanol production profitability.  First, the original construction loan was assumed to be paid off in 2017, so interest expense for the loan is no longer part of fixed costs starting in 2018.  Second, in order to reflect efficiency gains over time, the corn/ethanol conversion rate is increased from 2.80 gallons of ethanol per bushel of corn in 2007-2014 to 2.85 gallons in 2015-2018, and increased again to 2.90 gallons in 2019.  Similar percentage increases in DDGS production per bushel of corn are also assumed.  See the discussion below for the evidence justifying these changes to conversion rates.

To track plant profitability over time, weekly ethanol and DDGS prices at Iowa ethanol plants are collected starting in late January 2007.  Crude corn oil prices for the Midwest are available from OPIS.  Natural gas costs over 2007-2013 are estimated based on monthly industrial prices for Iowa available from the EIA.  Since January 2014 the Iowa industrial price has only been reported sporadically, and when reported, has been out-of-line with its historical relationship to nearby natural gas futures prices.  Consequently, a regression relationship between nearby natural gas futures prices and natural gas costs over 2007-2013 is used to estimate natural gas costs starting in January 2014.

Figure 1 presents the three components of plant revenue per gallon—ethanol, DDGS, and corn oil—on a weekly basis from January 26, 2007 through January 3, 2020.  The chart shows that ethanol prices (net of netback marketing costs) started 2019 at historically low levels of $1.25 per gallon, rose to a peak of $1.52 in late June, and then moved in a range the rest of the year between these two extremes.  DDGS prices experienced extreme volatility in 2019, with prices starting the year about 1.3 times the price of ethanol, but then plunging to only 0.8 times the price of ethanol at mid-year.  Total revenue in 2019 averaged $1.73 per gallon almost the same as the $1.72 per gallon average in 2018.  Figure 2 shows the four major cost components for producing ethanol.  The cost of corn is the major input cost, now about 80 percent of variable and fixed costs on average. The price of corn trended up during 2019, with a significant spike in May and June.   Increasing corn prices pushed up average total variable costs for 2019 to $1.60 per gallon, compared to $1.53 in 2018. 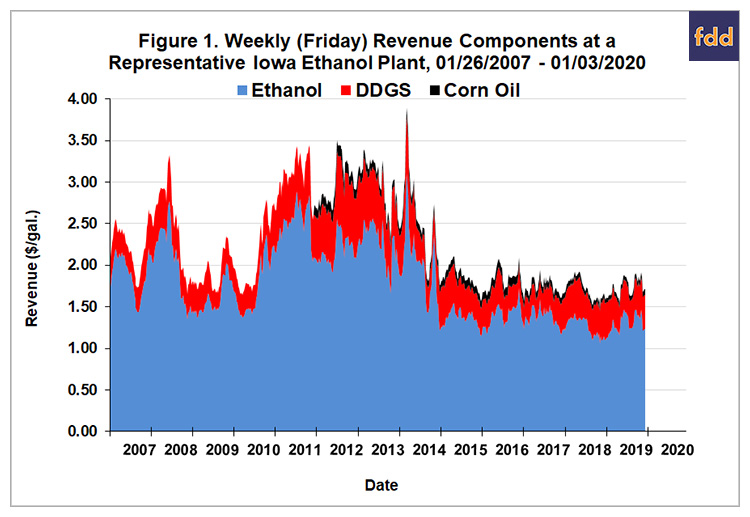 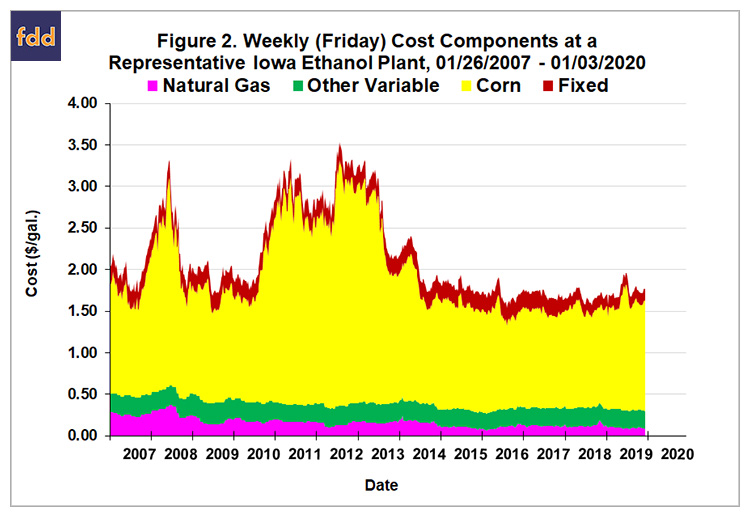 Figure 3 presents (pre-tax) estimates of ethanol production profits net of all variable and fixed costs.  Net profits in 2019 averaged a loss of -$0.02 per gallon, compared to a gain of $0.05 in 2018.   The pattern of net profits in 2019 can be divided into two distinct periods.  The average net loss from January through September was -$0.05 per gallon.  The net gain from October through December averaged $0.07 per gallon.  While the turnaround in the last quarter was a welcome reprieve for ethanol producers, margins turned negative again late in the year.  The depth of the losses experienced in mid-2019 is highlighted in Figure 4, which shows the market price of ethanol at plants (net of marketing costs) and the shutdown price for the representative plant.  The shutdown price equals variable costs minus non-ethanol revenue (DDGS and corn oil).  The market price came within $0.10 per gallon of dropping below the shutdown for much of the summer.  It is no surprise then that some ethanol plants went offline during 2019. 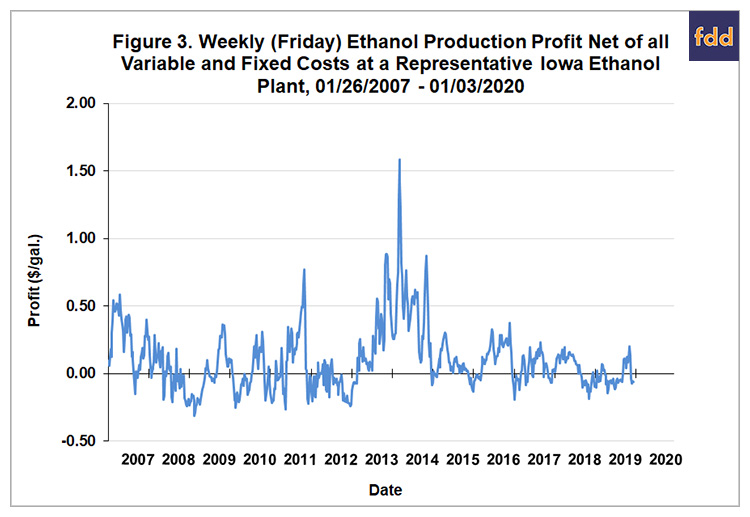 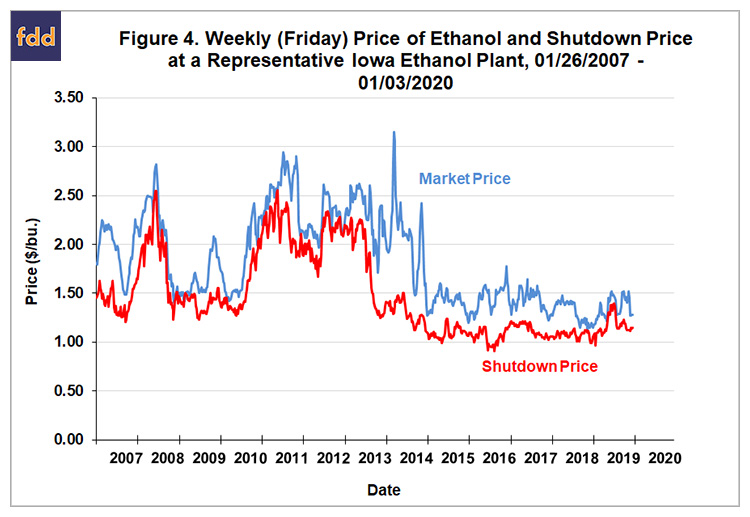 There has been no shortage of debate about the cause of the losses experienced by ethanol producers in 2019.  One explanation, favored by many in the ethanol industry, is the impact of small refinery exemptions (SREs) granted under the Renewable Fuel Standard (RFS) by the U.S. EPA.  While there is no doubt that SREs have opened a backdoor mechanism for the EPA to reduce the statutory and obligated RFS biofuels volumes, the evidence reported in several previous farmdoc daily articles shows that the physical use of ethanol has declined little due to the SREs (September 13, 2018; December 13, 2018; January 16, 2019; January 24, 2019; January 31, 2019).  The basic evidence in support of the conclusion that SREs did not “destroy” domestic ethanol demand is found in Figure 5, which shows the aggregate monthly blending rate for ethanol in the U.S. over January 2007 through October 2019.  While there is considerable variation in this (implied) blending rate from month-to-month, there is no evidence of a decline in the average blending rate over time due to the impact of SREs.  While it is true that SREs may have prevented the blending rate from growing as much as it might otherwise have in recent years, the SREs did not cause a decline in the overall blending rate. 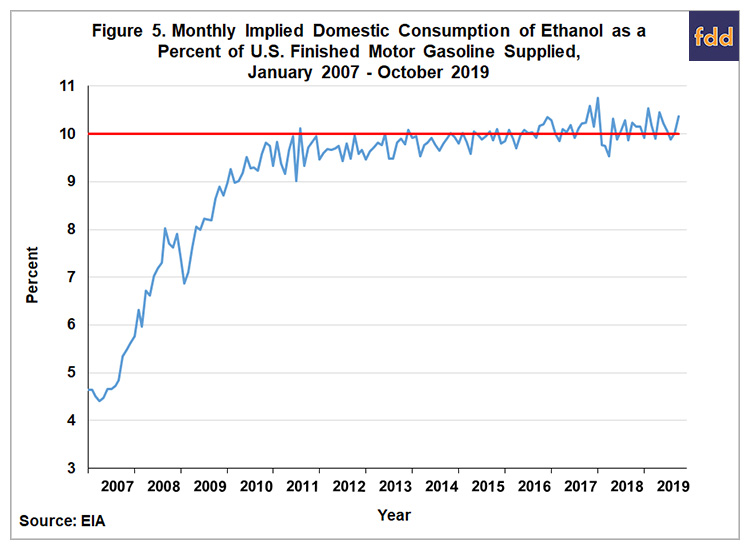 A more plausible demand-side explanation for the losses of ethanol producers in 2019 is the sharp drop in net exports.  Figure 6 shows U.S. monthly net exports (exports – imports) of ethanol over January 2010 through October 2019.  Without much fanfare, net ethanol exports for January through October 2019 fell by 340 million gallons compared to the same period in 2018.  The decline in net exports this is due to a combination of exports dropping by 206 million gallons and imports increasing by 134 million gallons.  The sensitivity of ethanol prices and profits to ethanol trade has been documented in earlier farmdoc daily articles (e.g., June 11, 2014). 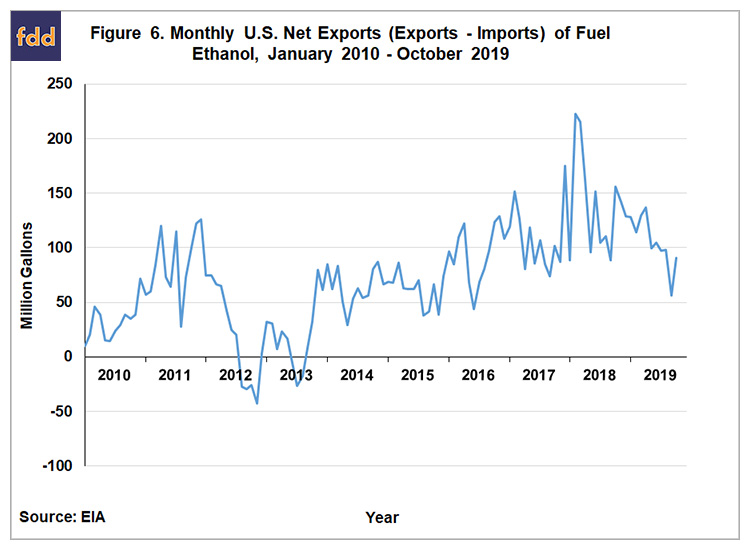 Another likely contributor to the losses in the ethanol industry is capacity expansion. The expansion of production capacity since 2014 has taken the form of building a few new plants and increasing production efficiency at existing plants.  Figure 7 provides a measure of the efficiency gains at ethanol plants in the U.S.  It shows the aggregate monthly conversion rate for ethanol per bushel of corn and sorghum feedstock from October 2014 through October 2019.  The feedstock data are collected from the USDA’s Grain Crushings and Co-Products Production report.  Notice that the aggregate conversion rate in 2014 and 2015 averaged around 2.80 and then began marching steadily upward, reaching a high almost 3.00 in recent months.  From the beginning to the end of this sample period, the conversion rate increased 5.7 percent.    For perspective, if the conversion rate had remained at 2.80, ethanol production in 2019 would likely have been about 600 million gallons smaller.  This added ethanol production via efficiency gains certainly contributed to downward pressure on ethanol prices and profits in 2019. 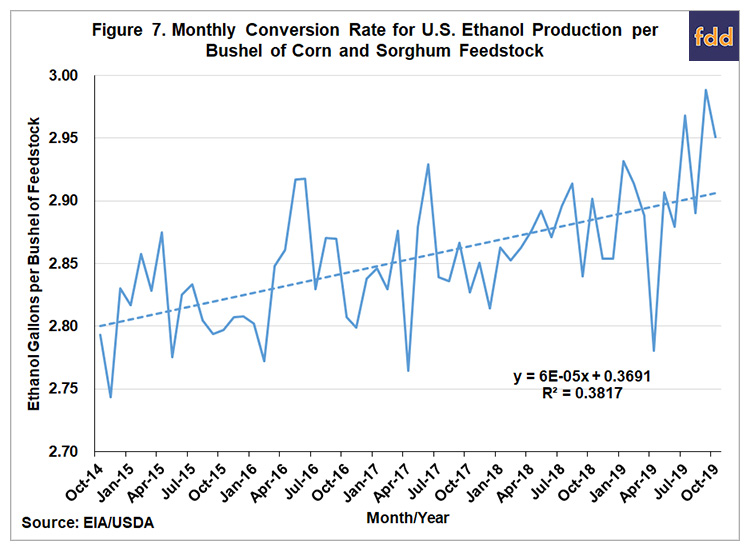 Finally, it is also useful to consider ethanol production profitability aggregated over an annual horizon for 2007-2019, as shown in Figure 8.  Profits are presented in terms of both total pre-tax net returns and percent return to equity.  The 2019 net loss of -$1.6 million was the first annual loss since 2012 and only the fourth annual loss over 2007-2019. It ended a string of six consecutive years of positive profits for the representative ethanol plant.  With the 2019 loss, the total cumulative (pre-tax) return to equity holders for the 2007-2019 period stands at $129.7 million, slightly more than the assumed equity investment for the representative plant of $126.6 million.  We can use the average net loss for the representative plant to make a rough estimate of profit for the entire U.S. ethanol industry in 2019.  Assuming all plants in the industry earned a net loss of -$0.02 per gallon and that total ethanol production for the U.S. was 15.7 billion gallons in 2019, aggregate ethanol industry (pre-tax) losses can be estimated at -$314 million. 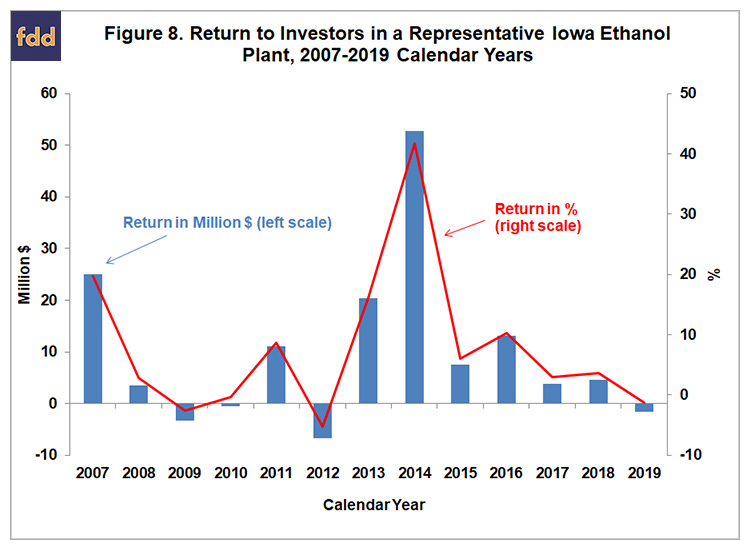 The percent return to equity holders provides useful information on the attractiveness of investment in ethanol plants relative to other investments.  The average return was 7.9 percent over 2007-2019 and the standard deviation, a measure of risk, was 12.5 percent.  By comparison, the average return for the stock market over this period, as measured by the S&P 500, was 10.4 percent and the associated standard deviation was 18.1 percent.  The ratio of average return to standard deviation provides one measuring stick of an investment’s return-risk attractiveness, and on this measure the ratio for ethanol investment, 0.63, continues to compare favorably with the ratio for the stock market as a whole, 0.57.  This provides important context when considering the losses experienced by ethanol producers in 2019.  Even with this loss included in the data, ethanol plants have a respectable record of investment performance over the last 13 years.

The ethanol industry in 2019 experienced its first losing year since 2012, thereby ending a run of six consecutive years of positive returns.  The estimated loss for a representative Iowa ethanol plant in 2019 was -$1.6 million.  While large, the 2019 loss was still far less than the -$6.7 million loss in 2012.  The evidence points to a combination of a steep drop in net ethanol exports and increases in production efficiency as the driving forces behind the low prices and financial losses experienced by ethanol producers during 2019.  The fortunes of the U.S. ethanol industry will probably not improve until production and use are better balanced.  This will require shuttering some production capacity, additional demand, or some combination of the two.  The most optimistic scenario is additional demand for U.S. ethanol exports as part of the Phase 1 trade deal with China.

Irwin, S. “How Tough of a Year was 2018 for Ethanol Production Profits?” farmdoc daily (9):26, Department of Agricultural and Consumer Economics, University of Illinois at Urbana-Champaign, February 13, 2019.

Irwin, S. “What Happened to the Profitability of Ethanol Production in 2017?” farmdoc daily (8):45, Department of Agricultural and Consumer Economics, University of Illinois at Urbana-Champaign, March 14, 2018.

Irwin, S. “The Profitability of Ethanol Production in 2016.” farmdoc daily (7):18, Department of Agricultural and Consumer Economics, University of Illinois at Urbana-Champaign, February 1, 2017.

Irwin, S. and D. Good. “Why Are Ethanol Prices and Production Profits So High?” farmdoc daily (4):108, Department of Agricultural and Consumer Economics, University of Illinois at Urbana-Champaign, June 11, 2014.