The novel coronavirus pandemic and the massive reaction in America and around the world to try and halt the spread has created a situation without a straight-forward historical analogue.  For farm policy this is also true.  In the scramble to work out appropriate policy responses there may be value in historical perspectives on acreage responses during previous times of crisis.

USDA released its Prospective Plantings report on March 31 and it was most notable for indicating that farmers intended to play nearly 97 million acres of corn in 2020 (farmdoc daily, April 6, 2020).  The report is, of course, early and merely a measure of intentions rather than actual planted acres.  It also involves responses prior to the novel coronavirus pandemic and the global response (farmdoc webinar, April 3, 2020).  It cannot be outright dismissed, however, because planting season is already underway and even those farmers who have yet to begin to plant have already made seed and other input purchases. 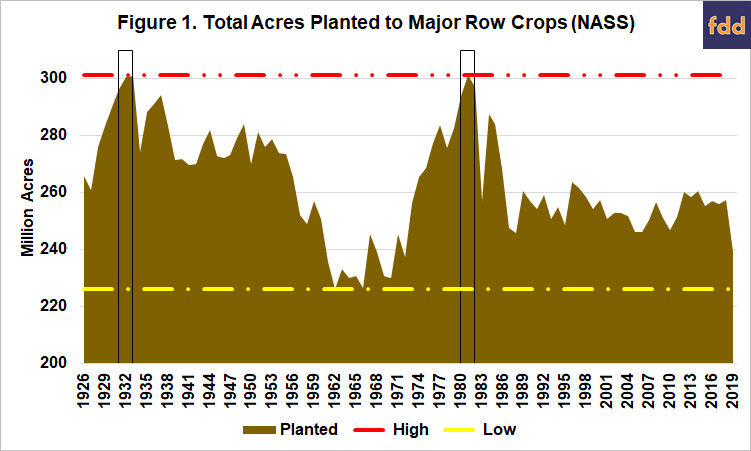 Highlighted in Figure 1 are the peak years for acreage, 1932, 1933 and 1981.  Total planted acres for the major row crops increased in the early years of the Depression, adding 18 million acres to the 283 million acres planted in 1929.  The historic high acreage level of 301 million acres planted was reached in both 1932 and 1933. As noted above, total cropland used for crops also approached the peak acreage during the early years of the Great Depression, which began in October 1929.  These acreage increases are notable because of the vast harm to farmers and the farm economy brought about by the Depression.  One result was policy to reduce acres planted to corn, wheat and cotton, including the Agricultural Adjustment Act of 1933, the Soil Conservation and Domestic Allotment Act of 1936 and the Agricultural Adjustment Act of 1938.

Both total acres of cropland used for crops and total acres planted to the major commodities peaked again in 1981, at 387 million and 301 million, respectively.  Total acres planted to the major crops increased from 269 million acres planted in 1975 to 294 million in 1980 and then the 301-million-acre peak in 1981.  This second peak was the end of the era of substantially elevated acreage levels that began in the mid-1970s and is clear in Figure 1.  Similarly, total cropland used for crops increased from 367 million in 1975 to 369 million acres in 1978, before reaching the 387 million acreage peak in 1981.  The pattern of increased acres was also similar to the Great Depression; the acreage increases took place as the farm economic crisis deepened and worsened. 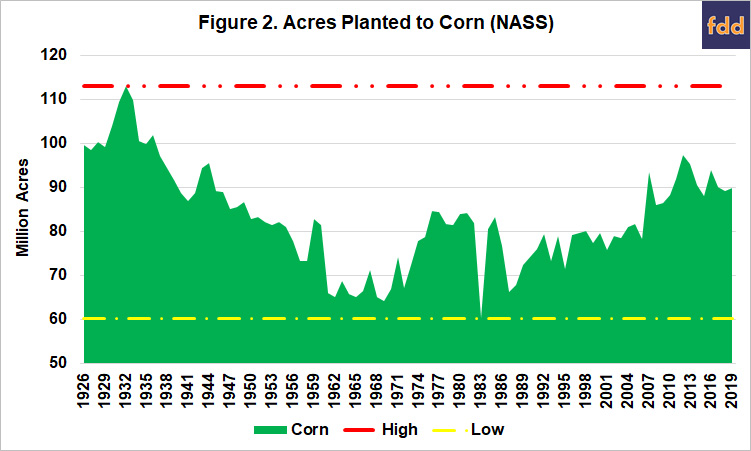 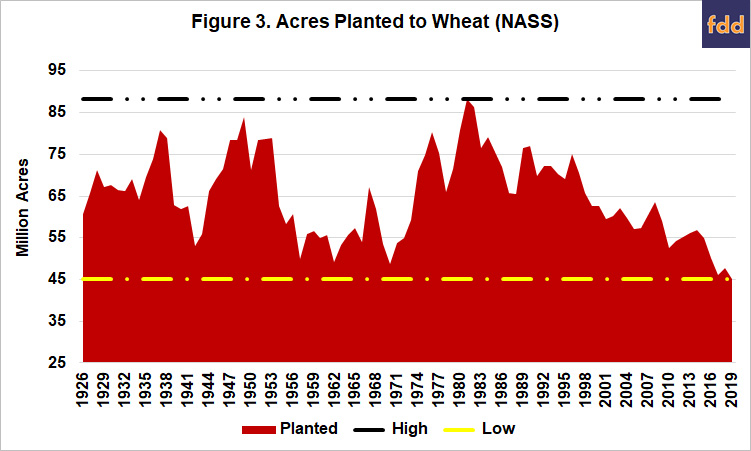 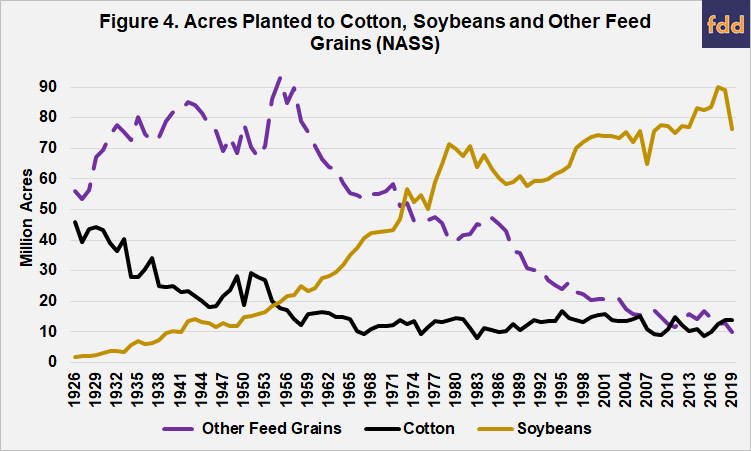 There is one other piece to the acreage discussion, the impact of policies designed specifically to address planted acres.  Figure 5 illustrates the total acres planted to the major row crops and the acres removed from production or planting by policy.  Acres removed by policy are indicated by the navy bars and work down from zero on the right-hand side.  The brief history of acres removed by policy can be divided into the parity system of the 1930s, which used allotments to restrict planted acres of surplus crops.  Next was the Soil Bank (1956 to 1958) which coincided with allotments for cotton and wheat but also removed additional acres in an acreage reserve and a conservation reserve program (farmdoc daily, February 20, 2020).  It was followed by specific feed grains legislation in the 1960s that used Payment-in-Kind policy to encourage farmers to reduce acres planted to corn and the other feed grains (barley, oats, rye and sorghum).  The impacts of those policies can also be clearly seen in Figure 4.  Next, set-aside policy was used in the 1970s and 1980s but was terminated in the 1996 Farm Bill.  Finally, the Conservation Reserve Program (CRP) was enacted in the Food Security Act of 1985.  Since 1996 when farm program payments were decoupled from planting and set-aside authority ended, CRP has placed between 21 million acres (2019) and 37 million acres (2007) of environmentally-sensitive land under long-term conservation practices.  From 1996 to 2019, CRP has averaged approximately 30.5 million acres. 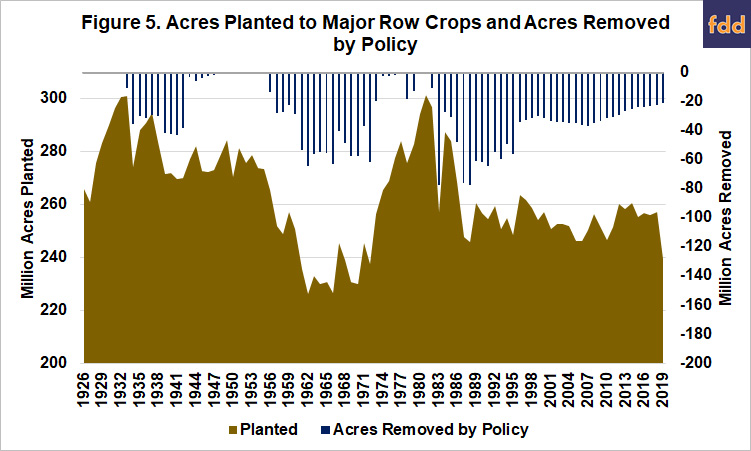 Finally, Figure 6 compares the 2020 prospective planted acres with the two previous peaks in 1932 and 1981 for corn, wheat, other feed grains (barley, oats, rye and sorghum), southern crops (cotton, rice and peanuts), soybeans and acres removed by policy.  Notably, there was no policy to remove acres in 1932 and set aside acres were not used in 1981; CRP was not in place in 1981 either.  The prospective plantings for these crops in 2020 total just under 257 million acres.  For CRP in 2020, the fiscal year 2020 cap established by the 2018 Farm Bill is 24.5 million acres and that is the number of acres used in Figure 6.  FSA recently reported that just over 3.4 million acres were accepted in signup 54.  Combined, the acres planted and CRP equal 281 million acres, which is 20 million acres below the 1932 and 1981 peak planted acres. 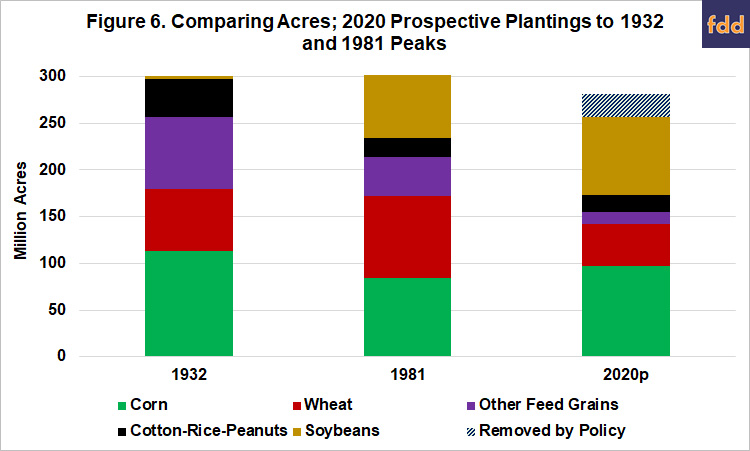 Reviewing the history for acres in farm production, as measured by total acres planted to major row crops, offers perspective for consideration in this current pandemic and the economic crisis expect to result.  Planted acres increased in the early years of the two most significant economic crises for farmers, in the early years of the Great Depression and as the 1980s farm crisis developed.  During each of these eras, corn and wheat were the largest drivers of the acreage increases.  The historic policy response has been mechanisms for encouraging farmers to plant less.  Three major policy changes in the last 30 years are also important to keep in mind: the Conservation Reserve Program created in 1985; decoupling and the end of set-aside policy in 1996; and the Renewable Fuels Standard beginning in 2005.  Since at least 1996, corn and soybeans have been the largest crops in terms of acres planted and they have been the predominate drivers of increases or decreases in overall acres in production. USDA’s Prospective Plantings report offers an early prediction that farmers may increase planted acres of corn (97 million) and soybeans (83.5 million) compared to 2019 but that total planted acres are well below earlier peaks; approximately 20 million acres remain unaccounted for by either prospective plantings or CRP.