The Soil Bank was enacted as part of the Agricultural Act of 1956 but it struggled, caught in the regional battle over policy and the post-war technological revolution.  The Soil Bank was signed into law in late May, 1956; implementation too late to impact plantings that year.  The program came under substantial political attack and eventually faded out of operation going into the 1960s.  This article, part seven in the series on conservation, briefly reviews how the Soil Bank was lost.

As discussed previously, the Soil Bank policy concept was initiated by farmers in Illinois and built upon by agricultural economists at the University of Illinois (farmdoc daily, January 9, 2020).  It gained momentum, with components of the policy introduced by various Members of Congress and eventually making it into President Eisenhower’s 1956 message to Congress (farmdoc daily, January 24, 2020).  The increasing surplus of the supported commodities was at the core of the farm policy debates of this era, complicated by political fights over price supporting loan rates and the diversion of acreage among supported crops.  The technological revolution overtaking American agriculture was single biggest factor fueling the surplus but was not accounted for in the policy debates.  This technological revolution built upon the earlier adoption of mechanized farming going into World War II with new hybrid seeds; it also included the widespread adoption of synthetic fertilizers and pesticides that were byproducts of WWII scientific advances, as well as repurposing machinery for center-pivot irrigation in the arid western Great Plains.  Yield increases were unmanageable by the increasingly ineffective parity policy system.  Figure 1 traces the increase in national average yields for corn, cotton and wheat from the Roosevelt through Eisenhower Presidencies and farm bill debates. 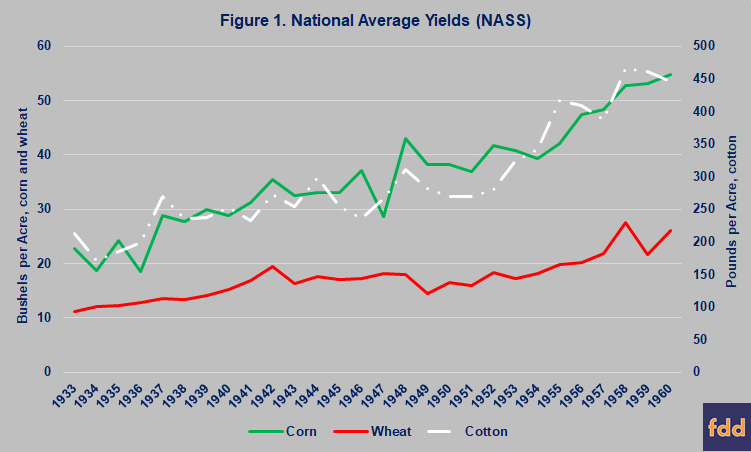 Most notable in Figure 1 is that yields for all three crops more than doubled over this timeframe; corn yields increased by 240%, wheat yields by 209% and cotton yields by 233%.  From a policy perspective, the parity system—which relied upon acreage allotments to control supplies for price-supported commodities—would have required vast reductions in the acres planted to these crops to keep supplies under control.  The 1957 crop year provides a clear example as summarized in Table 1.  Congress had placed statutory minimum allotments on cotton and wheat, keeping acres well above the levels calculated by USDA as likely to balance supplies with demands. 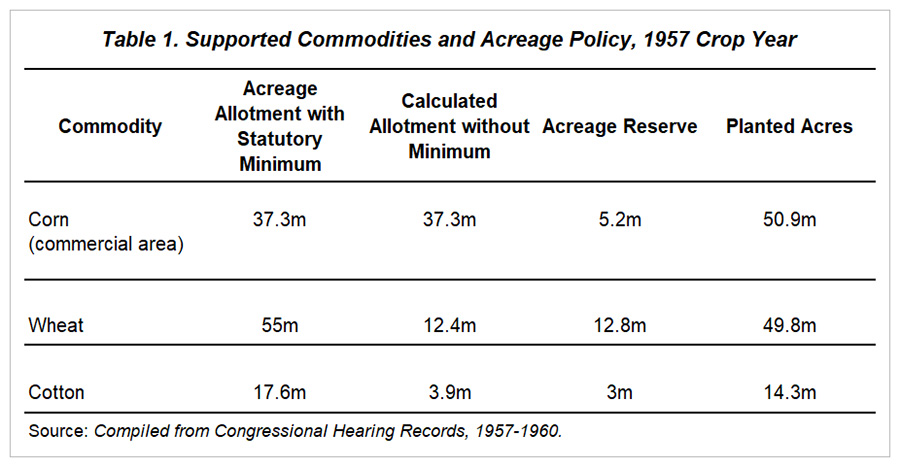 Political realities made full enforcement of acreage reduction policy untenable.  The combination of acres planted with yield increases helped build massive surpluses of commodities forfeited under the price supporting loans.  The Soil Bank was intended to help alleviate the acreage and surplus problems plaguing the agricultural economy and farm policy.

Politics was a large part of the Soil Bank’s undoing; first Southern agricultural leaders in Congress placed a big bet they could force President Eisenhower to accept a return to 90% of parity in his reelection year but they lost.  They had to scramble to pass a bill that could overcome his veto.  The result pushed enactment of the Soil Bank into late May—after most planting had commenced—causing the program to stumble out of the gate.  The poor start would go on to provide ample fodder to Congressional critics.

The Soil Bank quickly stumbled upon the same regional political disputes that have always plagued farm policy; it ran into fierce resistance from Southern gavels in Congress.  House Agriculture Committee Chairman Harold D. Cooley (D-NC) and vice-chair W.R. Poage (D-TX) complained about unfair treatment of southern crops in the Soil Bank compared to corn; to them, it began with Midwestern corn farmers receiving a windfall in the Soil Bank by being able to plant more acres and receive payments equal to nearly $180 million in 1956.  They were joined in this attack by Senate Agriculture Committee Chairman Allen Ellender (D-LA).  Likely the most powerful and effective adversary of the program was Representative Jamie Whitten (D-MS), the chair of the House Agriculture Appropriations Subcommittee, who once stated in a hearing that “I think about the worst thing that has happened to this country is the soil bank program” (U.S. House of Representatives, 1959).  The Eisenhower Administration gave up on the acreage reserve of the Soil Bank, recommending to Congress in its 1959 Budget that Congress terminate the program at the end of the 1958 crop year; Congress agreed and the acreage reserve ceased operation.  Table 2 summarizes data regarding the acreage reserve of the Soil Bank, most of it compiled from Congressional hearing records, as well as production data from NASS. 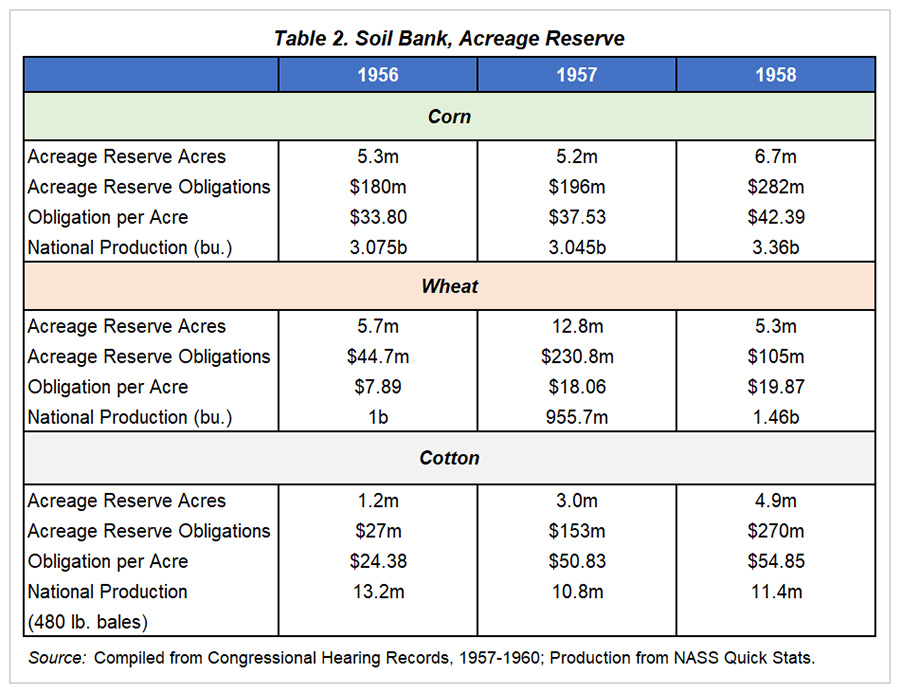 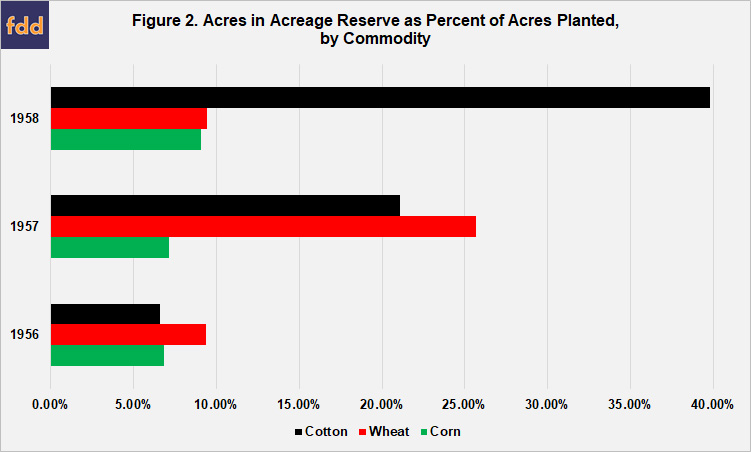 The Soil Bank also included authority for a conservation reserve, under which USDA entered into longer-term contracts with landowners for removing whole fields from production, placing the acreage under conservation cover such as grasses or trees.  While the Eisenhower Administration recommended termination of the acreage reserve for 1959, it continued to support the conservation reserve and requested that Congress extend the authority.  Congress did not extend its authority but existing contracts, some as long as 10 years, continued to be honored.  The program peaked in 1960 with 28.7 million acres contracted with over 300,000 farms.

The conservation reserve also ran into strong political opposition, again led by Southerners such as Representatives Cooley, Poage and Whitten.  In the Senate, the opposition expanded to the Northern Great Plains, including Senator Milton Young (R-ND) and Senator Henry Dworshak (R-ID).  Among the concerns discussed were the amount of spending for the program, which had reached cumulatively $339.5 million by 1960.  Members questioned the spending on acres considered less valuable because they were of average or below-average productivity; paying for such acres unlikely to achieve much in the way of supply control or surplus reduction.  The bigger political issue, however, was the enrollment of whole farms and the resulting perception of negative impacts on rural businesses, economies and communities (Talbot 1961).  There was also concern that some landowners, mostly timber interests, were gaming the program and getting the federal government to foot much of the bill for them.  Figures 3 through 5 summarize data on the conservation reserve of the Soil Bank, cumulative to 1960, the program’s peak prior to expiration of its authorization (House Ag Committee 1962). 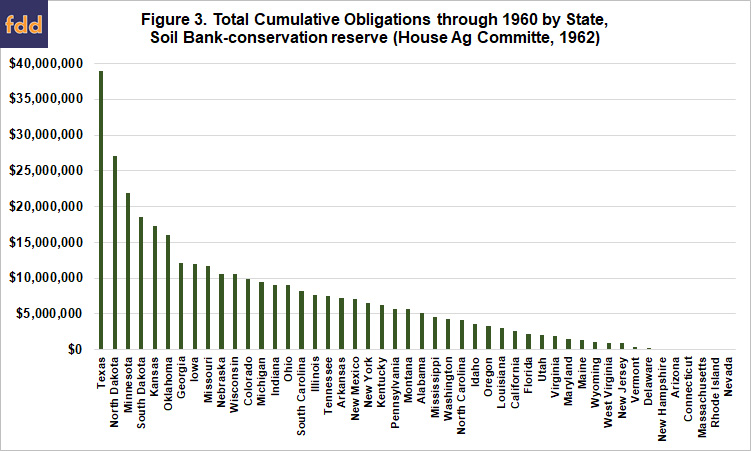 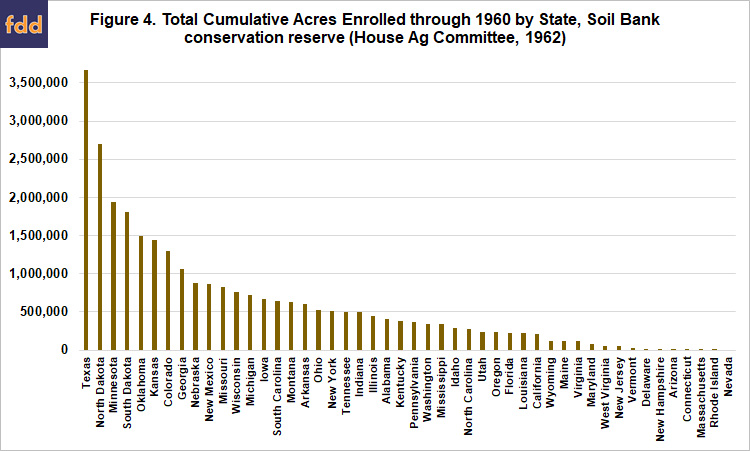 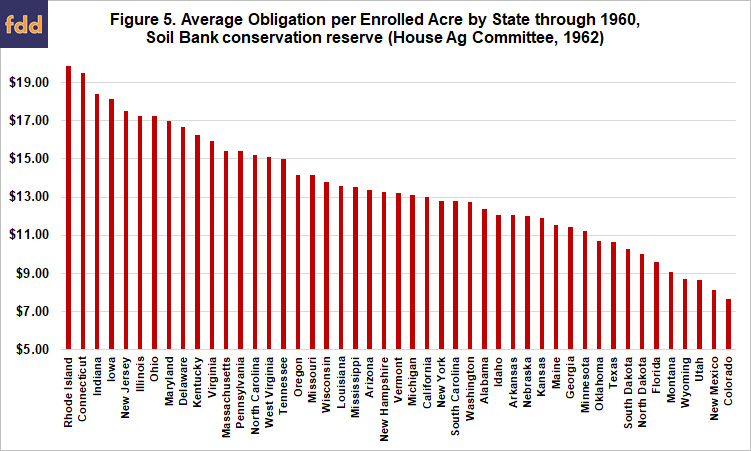 Texas, North Dakota, Minnesota, South Dakota and Kansas led in terms of acres enrolled and the total obligations under the program.  Smaller states in the Northeast mostly led in terms of obligation per acre enrolled, although Indiana, Iowa and Illinois were among the higher per-acre average.

Through the beneficial lens of hindsight, the Soil Bank appears doomed from the start. Brought forth in the maelstrom that was the farm policy debate of the Fifties, the program faced the regional-partisan political battles as Southern Democrats worked against the Republican Eisenhower Administration that they viewed as too closely aligned with Midwestern corn farmers.  The program was yet another version of supply control via acreage reduction, which was increasingly falling out of favor with farmers and had proven ineffective in the post-war technological revolution under which yields were expanding faster than any reduction in acres could offset.  Worse still, it suffered a late and bad start in 1956 after nearly being lost to the regional-partisan fight over high, fixed loan rates; the late enactment meant it had little impact on planted acres in 1956 which, in turn, provided fodder for its critics for unrelenting attacks.  To the Southerners, the Soil Bank was an extravagant windfall for corn farmers in the Midwest that cost too much with little to show in terms of reducing the surplus.  While it was attacked less, the longer-term conservation reserve contracts raised separate concerns because the program was viewed as paying for acreage that was the least productive and likely shouldn’t have been in farming, thus open for abuse.  Possibly more politically consequential, there was growing concern in Congress that the program took whole farms out of production with drastic economic consequences for rural economies and communities.  Conceived at the grass roots and cloaked in the comfort of conservation, the Soil Bank was a short-lived experiment in farm policy that provides lessons aplenty; the progeny of Dust Bowl concepts it was also the forebearer of later conservation policies, most notably the current Conservation Reserve Program (CRP).

Coppess, J. 2018.  The Fault Lines of Farm Policy: A Legislative and Political History of the Farm Bill (University of Nebraska Press).

U.S. House of Representatives, Subcommittee of the Committee on Appropriations, “Department of Agriculture Appropriations for 1960,” Hearings, Part 4 (March 18, 1959).