Congress has authorized $2.7 trillion in spending to address health and economic issues arising from the COVID-19 pandemic (Coppess, et al., farmdoc daily, April 24, 2020).  Government assistance is clearly warranted based on experiences in other sharp market contractions, including the 2008 Great Recession.  However, the US has added debt at a record peacetime rate since then, and now has the 6th highest ratio of debt to gross domestic product (GDP) among countries that account for 95% of world GDP.  Therefore, this article addresses the size and potential importance of US Federal debt. 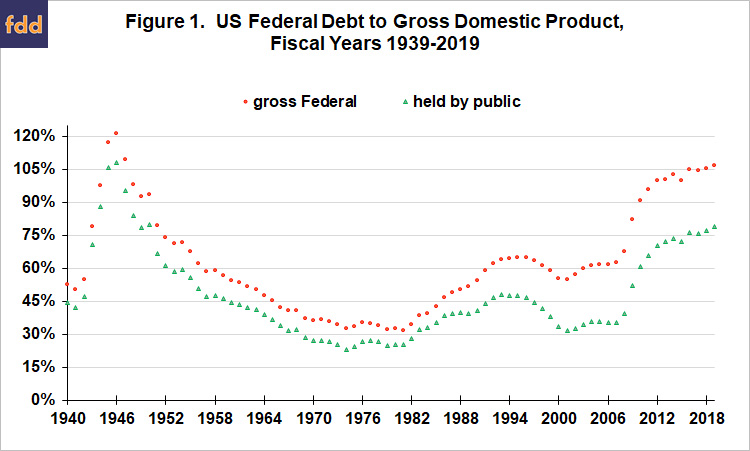 Growing even faster has been the debt ratio most experts track, the ratio of Federal debt held by the public to GDP.  It has more than doubled from 35% in FY2007 to 79% in FY2019.  This debt measure excludes US debt held by US government agencies, such as the Social Security Administration.  The argument for focusing on debt held by the public is that credit worthiness of government is impacted less when it defers interest payments to itself than when it defers interest payments to public bondholders.  For a detailed discussion of US Federal debt, with a focus on the increase since the Great Recession, see Federal Debt: A Primer (Congressional Budget Office (CBO), March 2020).

Based on data compiled by the International Monetary Fund (IMF), as of 2019 the US had the 6th highest ratio of government gross debt to GDP (see Figure 2).  This debt measure is similar to gross Federal debt in the Economic Report of the President.  Singapore, Portugal, Italy, Greece, and Japan had a higher ratio, with Japan (238%) and Greece (177%) markedly above the other high debt counties.  Figure 2 was constructed from the set of countries that accounted for 95% of world GDP in 2019.  This restricted set eliminates countries with the smallest economies, thus reducing the possibility of a large ratio primarily due to a small denominator, a small GDP in this case. 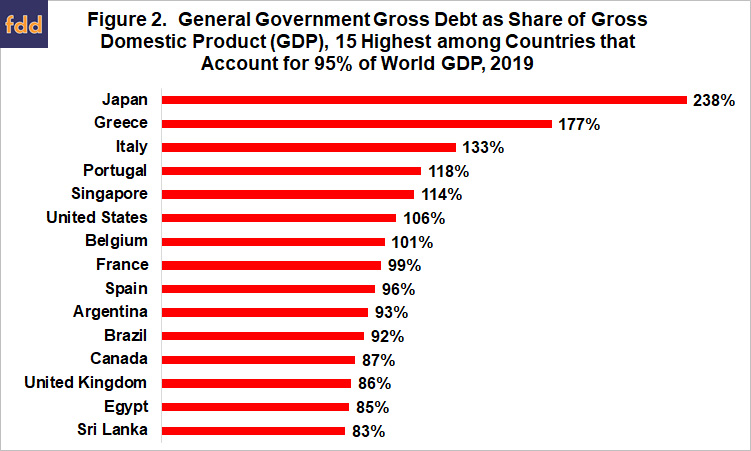 US Debt Ratio and COVID-19 Pandemic

The largest 1 year, peacetime increase in the ratio of gross Federal debt to GDP was 14.6 percentage points (67.7% to 82.3%) in FY2009.  Federal receipts declined 16.6% ($0.42 trillion) from FY2008 levels, in part due to a -2.1% contraction in GDP.  Federal outlays rose 17.9% ($0.53 trillion) vs. FY2008, largely for programs to address economic impacts of the Great Recession and associated housing crisis.  If FY2020 Federal receipts contract by 16.6%, they will decline by $0.57 trillion from FY2019 levels.  Combining this estimate of lower receipts with the $2.7 trillion in spending authorized so far for COVID-19 related programs implies a 15.4 percentage point increase in the ratio of gross Federal debt to GDP, a larger increase than in FY2009.  The estimate is probably conservative as both a larger economic contraction than in FY2009 and further spending on COVID-19 related programs seem likely.

Interest paid by government to holders of its debt is a claim by past government deficits on current government receipts.  This situation can be viewed as a competitive tradeoff and become the focus of government policy, as happened in the US during the late 1980s and much of the 1990s.  However, government can also decide to fund both current spending and debt payments, as the US has done since the Great Recession of 2008.

A critical factor determining which approach emerges is interest rate.  Figure 3 contains the closely watched 10-year US Treasury bill constant maturity interest rate.  Source is the Federal Reserve Bank of St. Louis.  In the earlier period interest rates were high as the Federal Reserve successfully removed high inflation from the US economy.  Net interest paid on the Federal debt exceeded 13% of Federal outlays from FY1984 to FY1999 (see Figure 4).  In contrast, since the Great Recession of 2008, interest rates have been low and trending lower (see Figure 3).  As a result, net interest as a share of government outlays and GDP has changed little even with the large increase in government debt.  For FY2019, net interest on US government debt was 8.4% of Federal outlays and 1.7% of US GDP.  Both are near their average values since FY1940 of 8.9% and 1.7%.  On May 18, 2020; the 10-year US Treasury rate was 0.75%, compared with the annual average rate of 2.14% for 2019.  More broadly, the downward time path of the 10-year Treasury bill interest rate since 1981 appears to remain intact (see Figure 3).  Last, as a final indicator of the important role of interest rate, a 1 percentage point increase in the average interest rate on US Federal debt increases net interest payments by approximately $170 billion, or 3.4% of FY2019 Federal outlays. 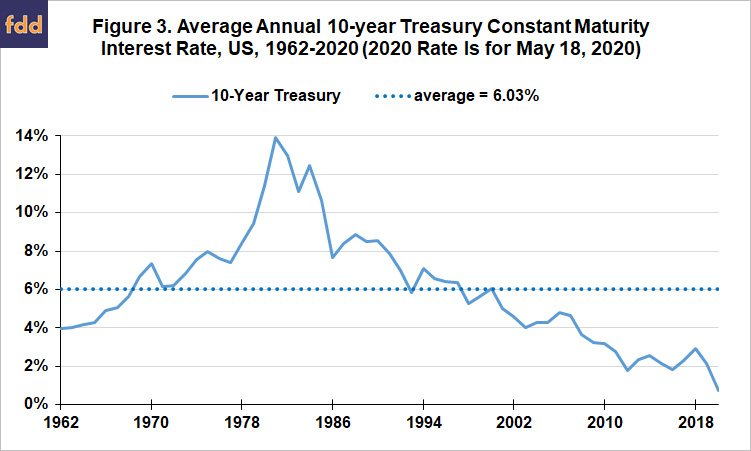 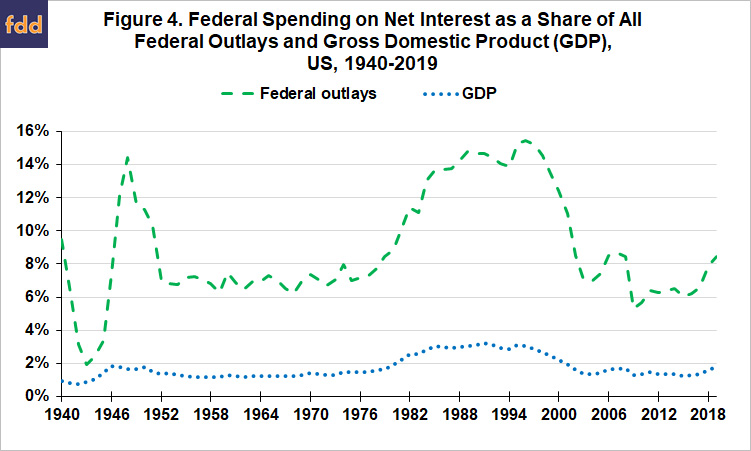 An often-expressed concern in public debates about US Federal debt is that high debt will reduce future growth (see, for example, CBO, March 2020).  Considerable disagreement exists among economists about this relationship.  As a simple illustration of why disagreement exists, Figure 5 contains the relationship between ratio of gross government debt to GDP in 2010 and subsequent, cumulative growth in GDP between 2010 and 2019 for countries that accounted for 95% of world GDP in 2010.  Source of this data is IMF.  The relationship is negative and significant at 95% statistical confidence.  Higher government debt ratios were thus associated with subsequent lower economic growth.  However, the 2010 debt ratio explains only 7% of the variation in GDP growth across countries.  In other words, 93% of GDP growth between 2010 and 2019 is explained by other factors.  To further muddy the discussion, average cumulative growth over 2010-2019 for countries with a debt ratio in excess of 80% was 39% (see Data Note 1).  In contrast, average cumulative growth for all other counties in Figure 5 was 55%, or more than 1% per year higher.  Another important question is thus, “Does government debt act as a drag on growth only after it reaches a certain level?”  In Figure 5, GDP is measured as current international dollars using the Purchasing Power Parity (PPP) adjustment.  This is the measure most economists prefer (see Data Note 2 for more discussion of the PPP adjustment). 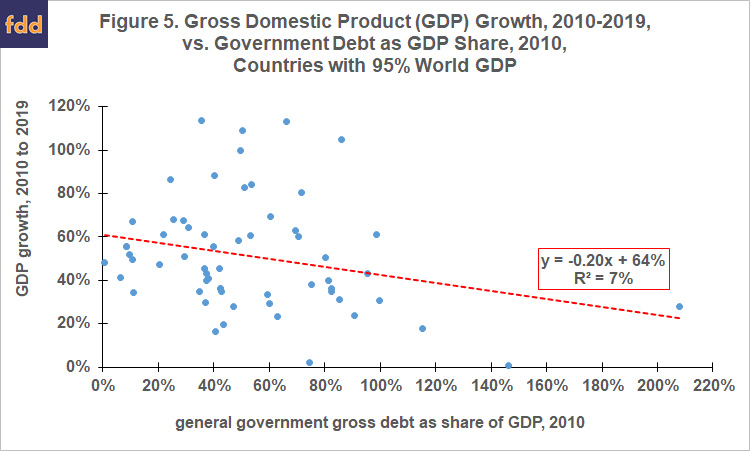 As are most countries, the US is incurring substantial government debt to address health and economic consequences of the COVID-19 pandemic.  The US is all but certain to see the largest one year, peacetime increase in its ratio of Federal debt to GDP.  This increase comes on top of the large increase in the ratio since the Great Recession of 2008.

Since the Great Recession, low and declining interest rates have, however, meant that US net interest payments on the Federal debt have not increased as a share of GDP or Federal outlays.

It is not easy to assess long term consequences of high government debt.  Considerable disagreement also exists among economists regarding the impact of size of government debt on economic growth.

We know debt per se is rarely the sole cause of economic problems from debt.  It is usually debt combined with an unexpected, negative event, often events.  A potential key risk for the US, given current low (near zero) interest rates, is a sudden increase in interest rates and thus interest payments on the Federal debt.

A common reason for interest rates to increase is price inflation.  Most experts at present are concerned about deflation due to declining demand, but it is important to note that per unit cost of production has increased due to the pandemic.  Social distancing (increased cost of space per employee or patron), enhanced sanitation, and supply chain reorientations have put upward pressure on per unit cost.  Higher per unit costs will result in higher prices, although the short-run pressure will be muted by demand contraction.  Nevertheless, it is important to watch this economic dynamic.

Counterbalancing the previous point, the downward trend since 1981 in the widely watched 10-year Treasury bill interest rate appears to remain intact with the declines that have occurred so far in 2020.  It increasingly appears possible the US could join the list of countries with negative interest rates.  Negative interest rates is a strategy for keeping net interest payments on government debt in check  Again, it is important to watch this economic dynamic.

High debt also may reduce future political and policy flexibility, in particular US monetary and fiscal policy.  How this consideration plays out depends upon political and policy decisions, such as the willingness to raise taxes and the willingness of buyers of US debt to continue buying it.  Financing from abroad, all else equal, implies larger trade deficits (Zulauf and Orden, farmdoc daily, January 25, 2019), but the dynamics of how the new federal debt will be financed are not yet known.

A current issue is how much weight to assign future policy flexibility during a crisis.  At the very least, the uncertain but potential value of future flexibility makes an argument for directing crisis assistance, as much as is possible, to those negatively impacted and not as broad-based payments.

A looming issue is what role taxes will play.  Recent history provides two very different responses to higher government debt:  higher taxes in the 1990s vs. lower taxes after the Great Recession of 2008 (except for allowing some tax cuts to expire in 2012).  Key determinants of which path the US ultimately takes will be interest rates, magnitude of the debt increase, severity of the economic contraction, response of private markets to US debt, and whether the pandemic impacts the view of Americans on the roles of the private market vs. government.  A key factor in the latter will be the American public’s answer to, “Did government or the private market respond more effectively to the pandemic?”  The November 2020 elections will likely be, in part, a test of sentiment on this question / issue.

It is easier to assess the impact of the large increase in Federal debt on future farm policy.  History strongly reveals that high Federal debt leads to efforts to reduce spending on farm bill programs.  The 2014 and 2018 farm bills suggest SNAP (Supplemental Nutrition Assistance Program) could again be a target.  It is not unreasonable to expect increased attention on reducing land in US production, thus raising market prices and lowering spending on the farm safety net.  But, all titles, including conservation and insurance, are likely to be put under the magnifying glass, particularly if the political focus of the US becomes debt and deficits.