Trend yield projections are foundations of early season forecasts of U.S. corn and soybean production.  In two recent farmdoc daily articles (June 11, 2020; June 18, 2020) we investigated the sensitivity of 2020 trend yield estimates to the sample period used to estimate the underlying trend regression model.  We found that linear trend yield projections for corn in 2020 can vary by as much as 4 bushels per acre simply based on the starting year used for the estimation period.  Similarly, we found that trend yield projections for soybeans can vary by as much as 2.5 bushels per acre.  This analysis was based on “unconditional” linear trend regressions that did not account for weather impacts across years, a methodology thought to result in a slight under-estimate of trend yield due to the asymmetric effect of weather on actual yields (e.g., Swanson and Nyankori, 1979).  That is, poor weather reduces yields more than good weather improves yields so that the impact of technology (trend) is under-estimated due to sharp reductions in yield from poor weather years.  The purpose of this article is to use “conditional” crop weather models to examine the sensitivity of trend projections for the 2020 U.S. average corn and soybean yields to the starting year of the estimation period.  This will allow us to directly estimate any bias inherent in unconditional trend regression model estimates. 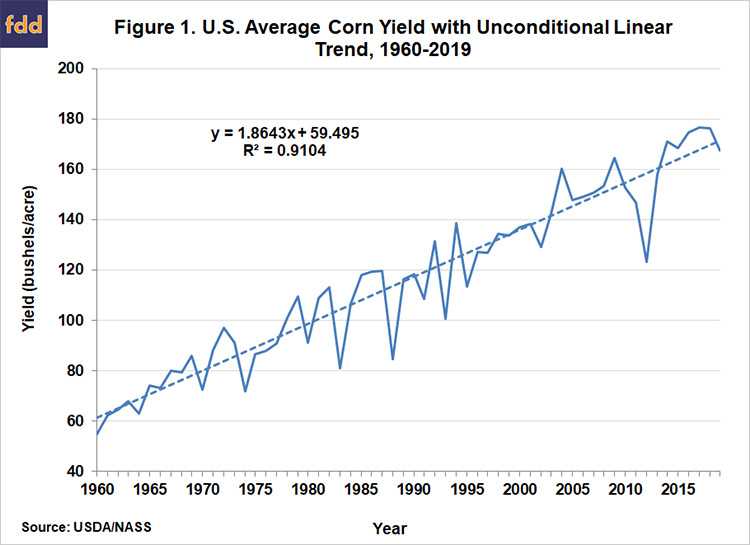 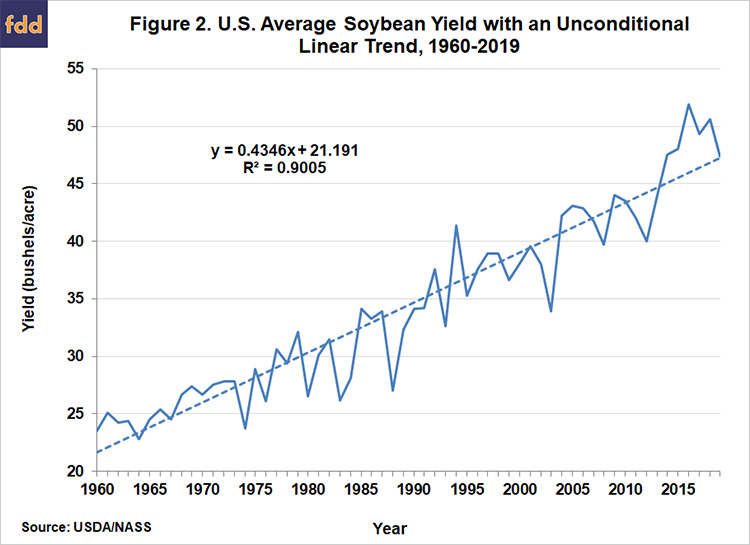 We use in the analysis a version of the crop weather regression models for corn and soybeans specified in these two earlier farmdoc daily articles (May 13, 2020; May 20, 2020) on late planting impacts.  The earlier versions related the U.S. average corn or soybean yield to a linear trend, late planting, quadratic functions of preseason (September-March), April, June, July, and August precipitation, and linear functions of April, May, June, July, and August temperatures as explanatory variables.  The weather variables are acreage weighted-averages for the Corn Belt.  For the present analysis, we reduce the number of variables to only the most important in order to preserve the highest degrees of freedom in smaller estimation samples.  Specifically, the revised models relate corn or soybean yield to a linear trend, late planting, a quadratic function of July precipitation, and July temperature.  For the full sample period 1960 through 2019, the R2 of the corn model is 97 percent and the soybean model is 94 percent.  So, despite the reduced number of variables the explanatory power of the models remains high. 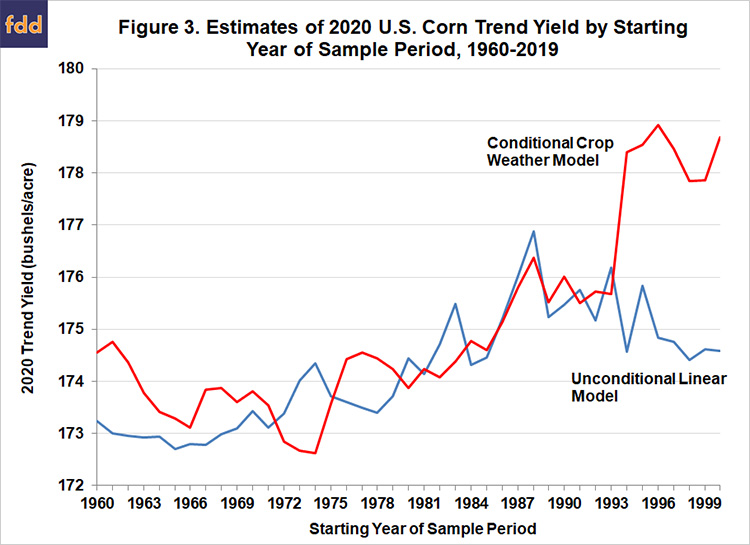 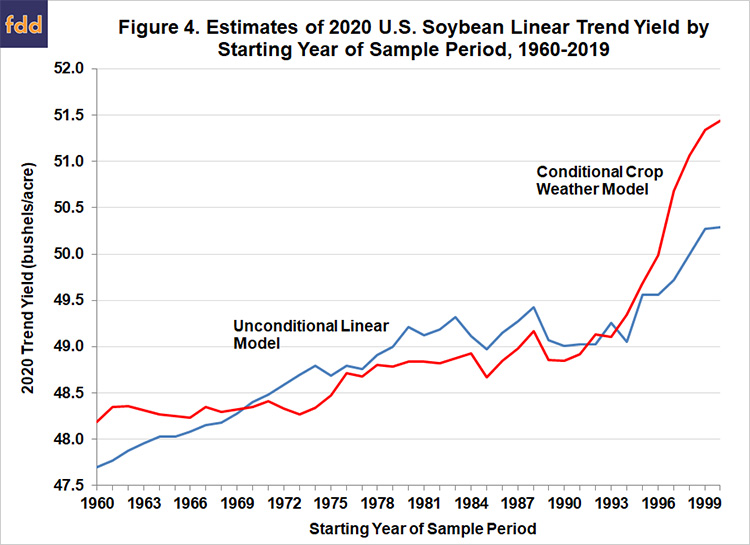 The reason for the divergence of the unconditional and conditional trend estimate for samples beginning in the 1990s is illustrated in Figures 5 and 6.  Figure 5 shows the unconditional trend for corn over 2000-2019 with and without 2012, a year of dramatically low yield due to a historic summer drought.  Figure 6 shows the same thing for soybeans with and without 2003 and 2012.  The 2003 soybean crop was historically low due to dry weather and aphid infestations.  Notice the large impact that inclusion of the extremely low yields have on unconditional trend estimates.  This happens because the sample period is relatively short and these low yielding years therefore have an inordinate influence on the estimated slope of the trend regression. The problem does not appear with crop weather model trend estimates based on the same sample because the models adjust for the severe weather in these years. 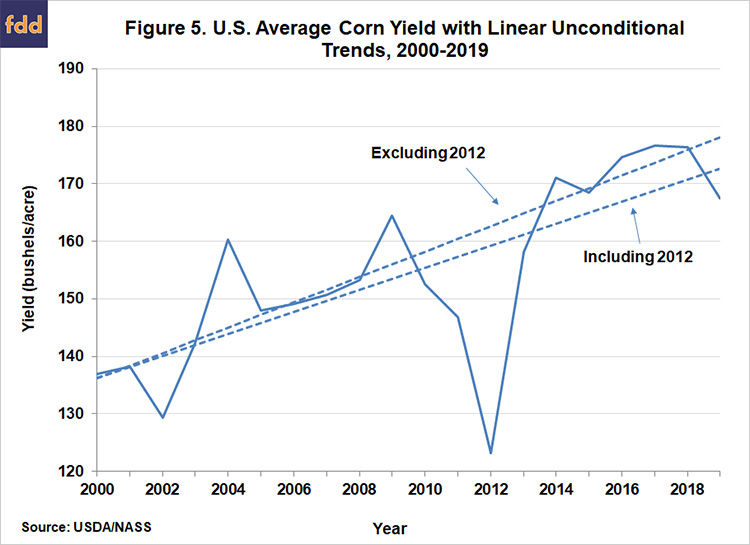 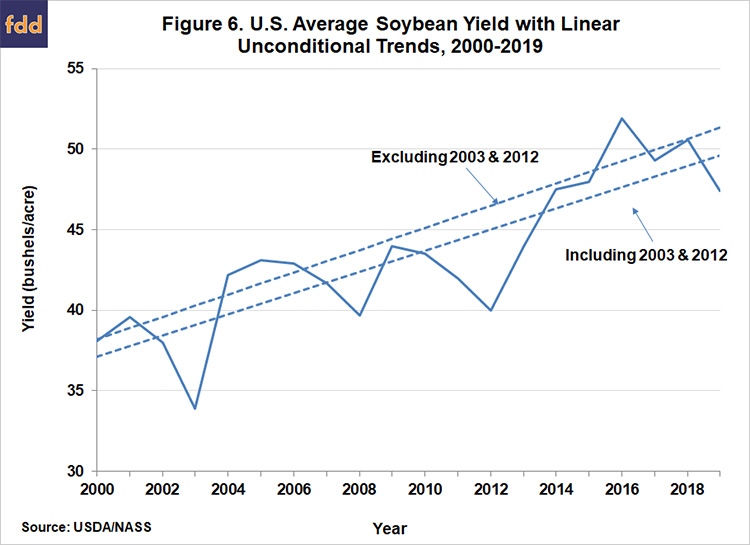 A variety of methods and data samples can be used to estimate corn and soybean trend yields for the U.S.  The most common method is to estimate simple “unconditional” trend estimates based on samples of historical yields, as we did in two recent farmdoc daily articles (June 11, 2020; June 18, 2020).  However, unconditional linear trend estimates do not account for weather impacts across years, a methodology that may result in a slight under-estimate of trend yield due to the asymmetric effect of weather on actual yields.  We estimate crop weather models for corn and soybeans for sample periods starting in 1960 through 2000 and project “conditional” trend yields for 2020.  For all practical purposes, we find no difference in the corn and soybean trend yield estimates from unconditional and conditional models for samples that begin in the 1960s through the 1980s.  Hence, for these relatively long samples there does not appear to be any notable bias in simple unconditional trend projections. However, there is a substantial difference in the trend estimates for samples starting in the 1990s, which can be explained by the exaggerated influence of extremely low yields, such as in 2012, on unconditional trend regressions in small samples.  This is an important lesson about the dangers of projecting unconditional trends using small samples of data.

Irwin, S. and T. Hubbs. "How Sensitive Are Trend Yield Projections for U.S. Soybean to the Starting Year of the Estimation Period?" farmdoc daily (10):111, Department of Agricultural and Consumer Economics, University of Illinois at Urbana-Champaign, June 18, 2020.

Irwin, S. and T. Hubbs. "How Sensitive Are Trend Yield Projections for U.S. Corn to the Starting Year of the Estimation Period?" farmdoc daily (10):107, Department of Agricultural and Consumer Economics, University of Illinois at Urbana-Champaign, June 11, 2020.