The return of low prices and the impacts of trade conflict and the coronavirus pandemic have driven increased interest in land retirement or set aside policies and prompted this series, beginning with a historical review of such policy in the US (Coppess, Schnitkey, Paulson, Swanson, and Zulauf, June 26, 2020).  This article is Part II of the series.  Its central thesis is that a declining US role in world crop markets, combined with a shift to production outside the northern hemisphere, calls into question whether US land retirement programs can raise US prices even within a single crop year unless they are large and thus costly.  They are also likely to lead to a loss in US market share.

Economic reasoning and empirical studies consistently find land retirement programs to be less than 100% effective.  Reducing plantings by 1 acre thus reduces output by less than 1 acre. This effect, where the reduction in output is less than the reduction in planted acreage, is commonly referred to as slippage.  Frequently cited reasons for slippage are:

The US has historically retired farmland for two reasons: (1) to reduce supply and (2) for conservation purposes.  Different versions of these two programs have been tried.  Slippage is found in all cases, although the magnitude varies by study.  One of the more recent studies, Dvoskin, 1988), citing existing literature, concluded that yield of diverted acres is approximately 80% of average crop yield.  In addition, using historical US program data, Dvoskin estimated that each retired US acre resulted in a 0.66 reduction in US harvested acres. .

This article focuses on slippage resulting from actions by farmers in the rest of the world.  They are not bound by US acreage retirement programs.  Deepening concern that the US was ceding export market share to other counties was a key reason the Agriculture Improvement and Reform Act of 1996 eliminated annual acreage reduction programs (Orden, Paarlberg, and Roe. 1999; Coppess, 2018).  Land retirement to reduce supply has thus been out of vogue in the US for over 20 years.  Changes in the US role in world corn, cotton, soybean, and wheat markets since the 1996 Farm Bill are examined in the next two sections. 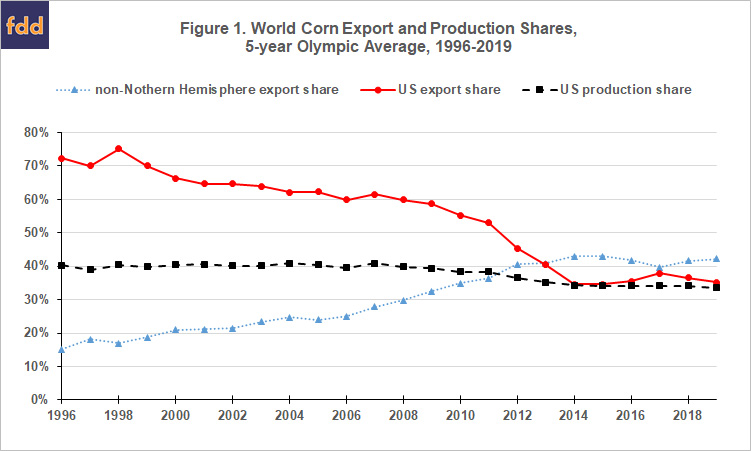 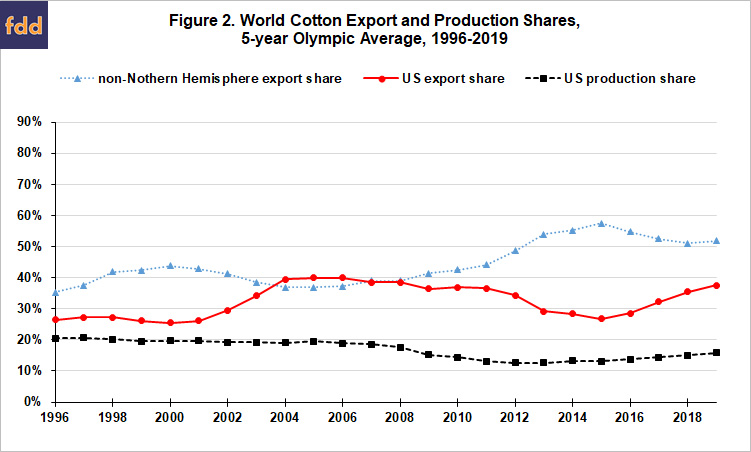 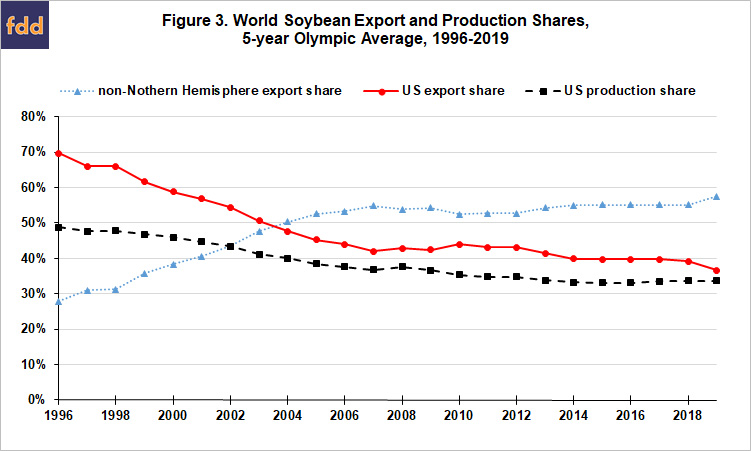 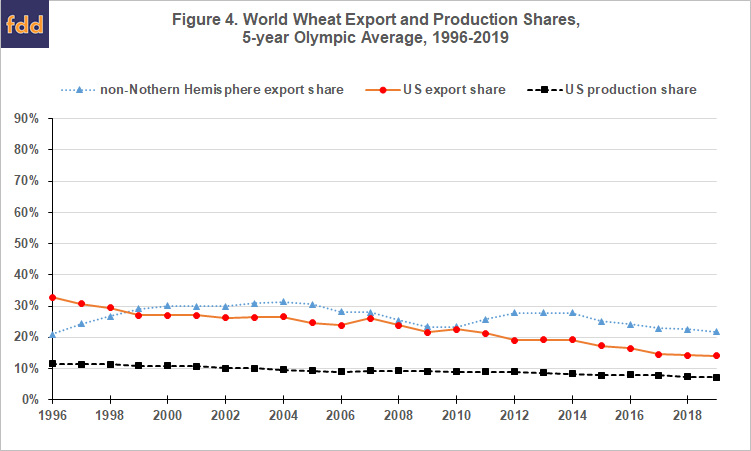 Rise in Exports from outside the Northern Hemisphere

Declining world dependence on US production and exports and growth in off-US season production implies that retiring US land is likely to be less effective today than historically.

Rest of the world has a much greater capacity to respond to US land retirement programs today than during the mid-1990s, the last time the US retired land for the purpose of reducing production.

The jump in exports (and production) from outside the northern hemisphere means rest of the world can respond much more quickly to supply reductions in the US.  The response is likely to occur within 6 months, or within the same US market year.

These three points suggest US retirement of corn, cotton, soybean, and wheat acres will likely lead to a quick loss in US share of world exports and production.  Moreover, what may have been enacted as a temporary reduction in US output has the real potential to become a permanent reduction.

Areas of the world in the USDA, FAS data considered to be in the northern hemisphere are East Asia, European Union – 28, Former Soviet Union – 12, North America, and Other Europe.