2019 Loss Ratios by Crop and for the Nation

The performance of the crop insurance program often is judged by loss ratios, which equal insurance payments divided by total premium. A loss ratio of 1.0 means that crop insurance indemnity payments are equal to total premiums. Ratios above 1.00 indicate that payments exceed premium, which occurs with some frequency. On the other hand, loss ratios below 1.00 indicate that payments are less than premium. Given the way RMA sets premiums according to legislative mandates, loss ratios should average slightly below 1.00 over time.

Loss ratios and other performance measures presented here come from the Summary of Business, which is available from the Risk Management Agency (RMA) website. Data were downloaded in the middle of July 2020. More 2019 data could enter into the system, causing performance to vary slightly from values presented here. 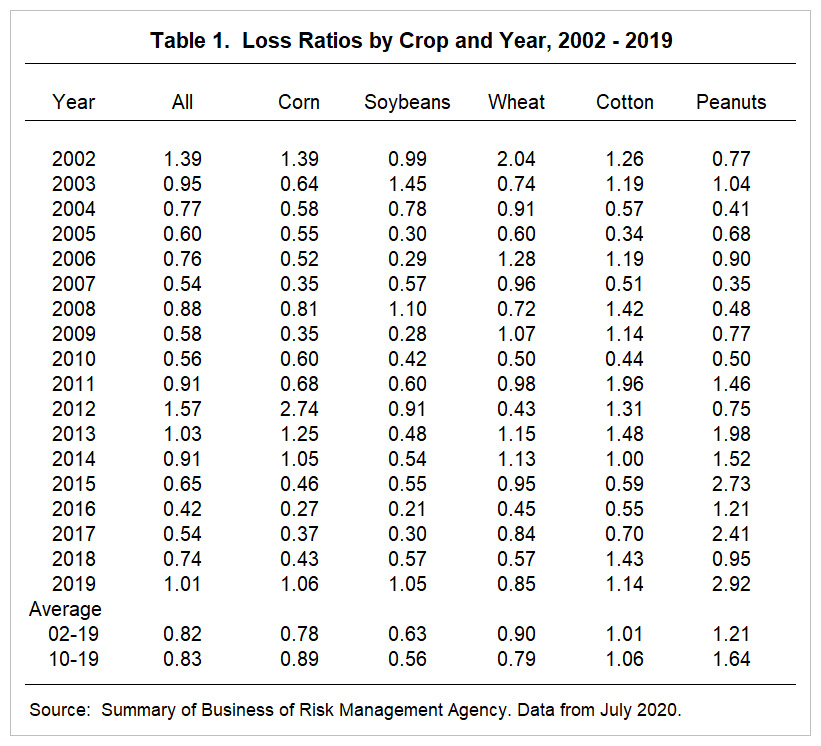 For 2019, the loss ratio for corn was 1.06, above the 2002-2019 average of .78 and above the ten-year average of .89 (see Table 1). Wet weather caused corn’s loss ratio to be higher than in recent years, but the loss ratio is not particularly high.  It would appear that droughts have much more impact on losses than does wet weather.  The highest loss ratio for corn occurred in the 2012 drought year and was 2.74. Even given the 2012 drought year and 2019 prevent plant year, the ten-year and the longer-term average corn loss ratios are below the 1.00 benchmark.

As is typical, loss ratios varied widely across the United States, and wet weather and prevented planting were positively correlated with higher losses.  Prevented planting payments represented 34% of total payments for corn and 30% of total payments for soybeans in 2019.  Those areas with large amounts of prevented planting also had claims from yield and revenue losses, likely because wet weather caused late planting, which reduced yields on farmland that was planted.  Late and prevented planting was prevalent along the South Dakota/Minnesota border, Wisconsin, northern and southern Illinois, northern and central Indiana, Ohio, northwest and north-central Ohio, and central and southern Michigan (see Figure 1). 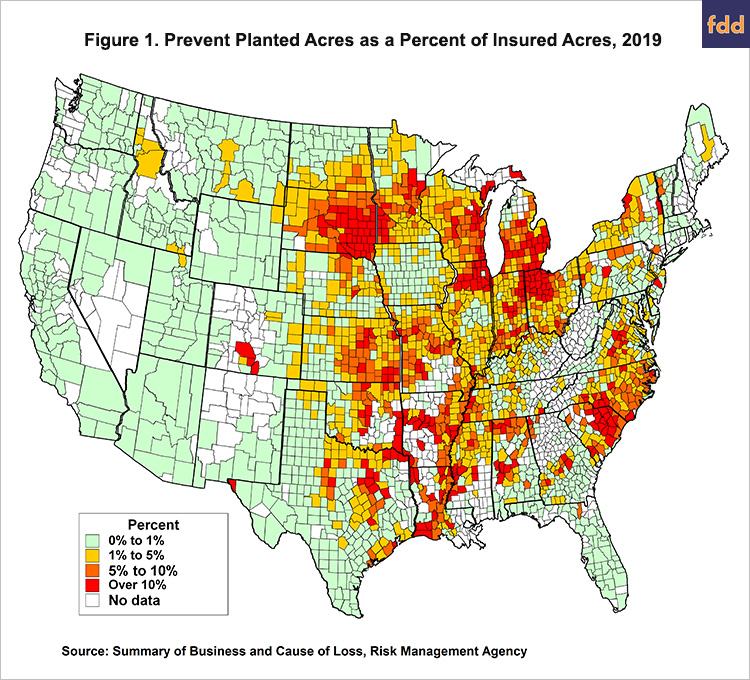 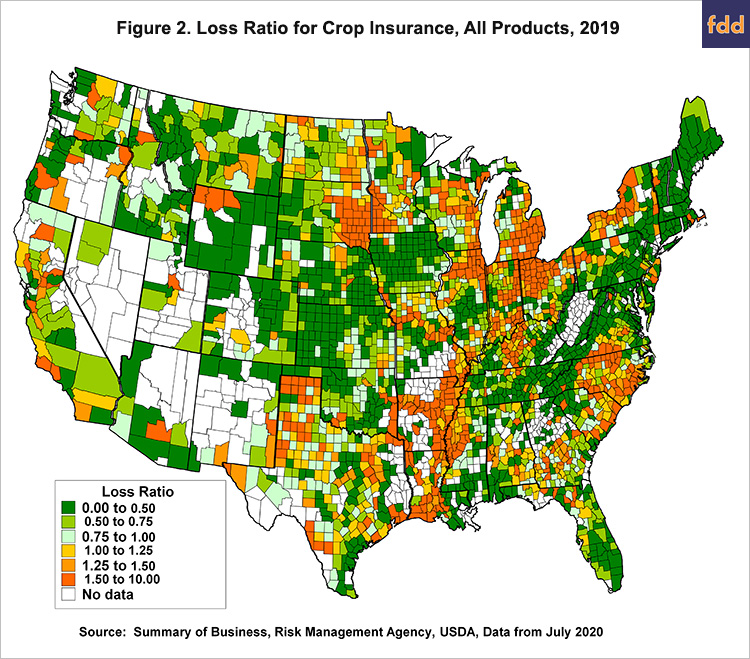 Loss Performance by Product in Illinois 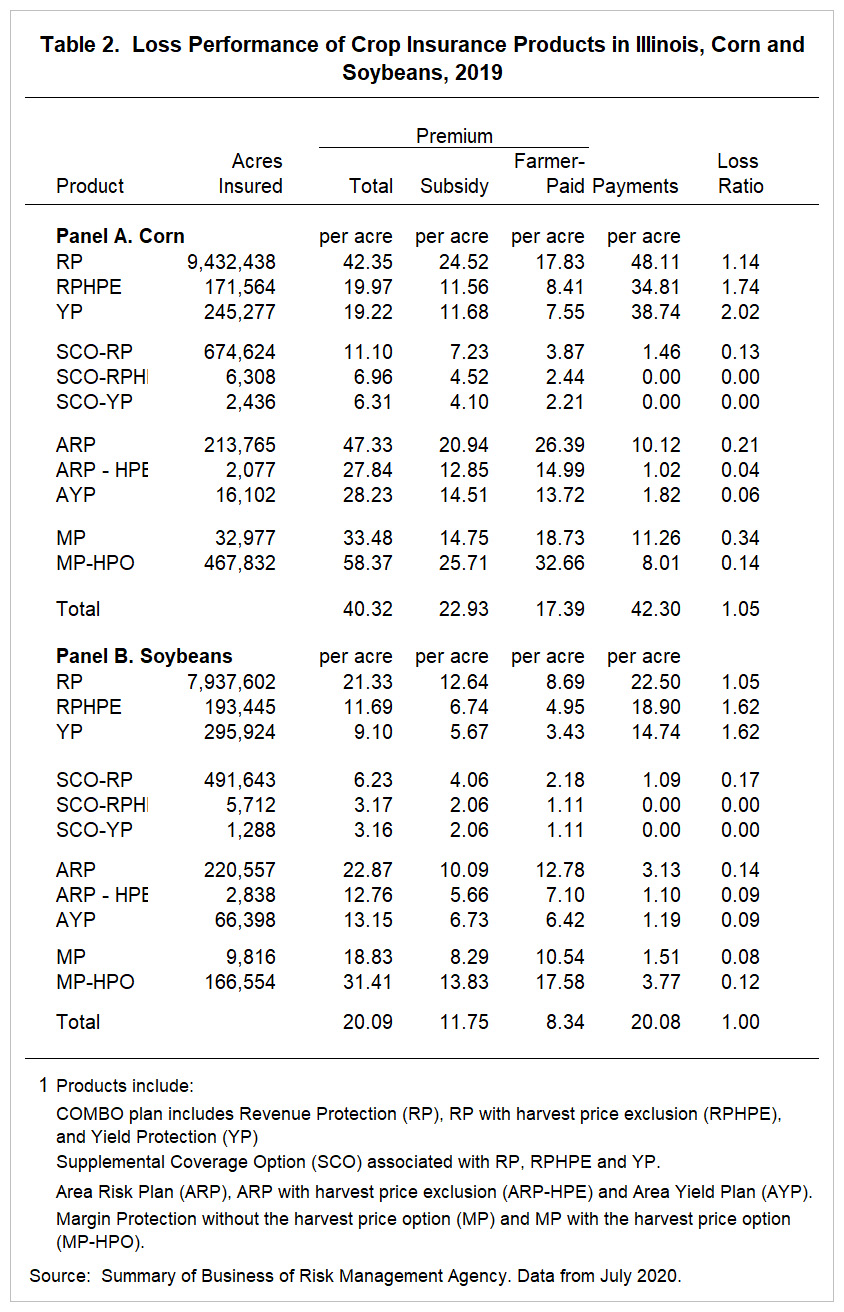 Supplemental Coverage Option (SCO) with RP as the underlying product had a .13 loss ratio for corn (see farmdoc daily, March 12, 2019). This product was used on 674,624 acres in Illinois. The 2019 projected price for corn was $4.00 per bushel and the $3.90 harvest price was 97.5% of the projected price. For SCO to make payments on its 86% county guarantee, yields would have to fall below expected yields by 11.5%. Most counties did not have this fall in yields.

Area Risk Plan (ARP) is the largest plan sold in the Area Risk Protection Insurance (ARPI) policy, which are stand-alone county-level products. ARP had a loss ratio of .21. Most individuals purchase ARP at the 90% coverage level. Given the projected and harvest prices in 2019, county yields would have had to fall from guarantee levels, which did not happen in most counties where ARP was purchased.

COMBO Products for soybeans had loss rates of 1.05 for RP, 1.62 for RPHPE, and 1.62 for YP. The projected price for soybeans was $9.54 per bushel, and the harvest price of $9.25 per bushel was 97% of the projected price. For the area plans, soybean yields had to be below the guarantee to trigger payments. In general, yields were near trends, resulting in low payments and low loss ratios on SCO, ARP, and MP for soybeans.